Thinking of adopting an American Pitbull Terrier or a German Shepherd for your family, and can't decide which breed is best? In the article below, you'll find out the differences between the two dogs, and what similarities they share. 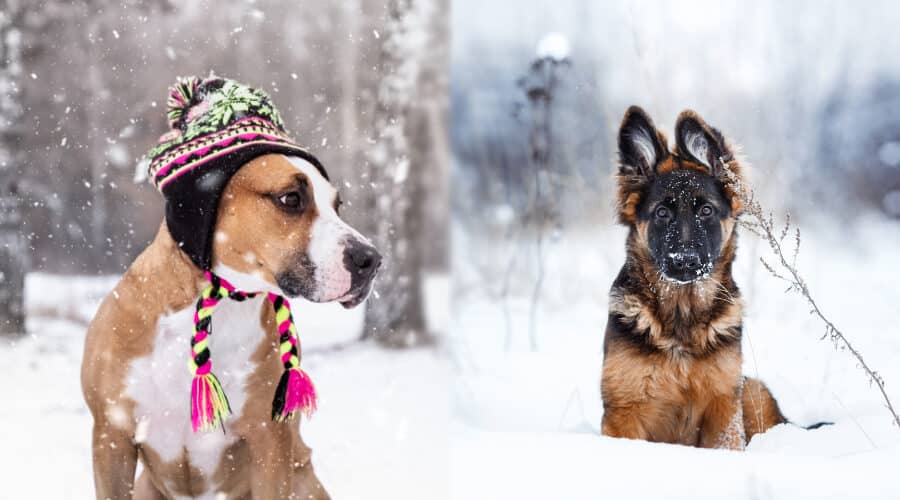 It’s fair to say that the American Pitbull Terrier and the German Shepherd both have a reputation for being tough canines, but they are both loving and affectionate with their close family, and loyal to the very end. If you are looking for a canine best friend that is always going to be by your side, or under your feet, then look no further than these two.

The Pitbull Terrier is more of a sociable guy, who is the life and soul of any party, whereas the German Shepherd is a bit more independent and likes to sit and watch everyone at the party, quietly keeping his distance and making sure that everyone is on their best behavior.

In this article, we are going to look at both the differences and similarities between the two breeds to help discover which one might suit you and your lifestyle better. So, without any further hesitation, let’s take a closer look at the differences and similarities between the American Pitbull Terrier and the German Shepherd.

In order to truly understand a dog and what his needs are it is important to get an insight into his history, and the American Pitbull Terriers and the German Shepherd’s history is quite different from one another.

The American Pitbull Terrier’s origins began in England, where Bulldogs and Terriers were bred together in order to create powerful and nimble fighting dogs. They come from long lines of Molosser dogs and share that lineage with the Caucasian Shepherd and other breeds.

In America, the larger and more powerful dogs were bred together in order to create a larger strain of fighting dogs, and over time these larger dogs were named the American Pitbull Terrier. These dogs were trained to viciously attack other dogs for sport, but to stop fighting when the humans entered the ring, which is where their ferocious and human-loving labels originate from.

He is not recognized by the American Kennel Club (AKC), but he is the most commonly found breed in rescue shelters across America, so there is an abundance of Pitbull Terriers around. There are four breeds that are commonly referred to as Pitbulls in the United States.

The German Shepherd originates from Germany, and he was originally a Shepherd for his master’s farm animals; however, it soon became clear that he made an equally great guard dog for his humans, and ever since then he has become the most recognized protection dog across the world. Not only does he make a great working dog with Police Services and the Army, but he also makes a great family guard dog too.

In 2019, the AKC ranked him as the 2nd most popular dog breed in America. He is also quite the celebrity, as only three dogs have ever been given a star on Hollywood’s Walk of Fame, two of which were German Shepherds, one being Rin Tin Tin and the other Strongheart, (and for those of you wondering the other dog was the famous Collie dog, Lassie).

The Pitbull Terrier and the German Shepherd look very different from one another, but it is because of their appearances that many people take a wide berth around them on the sidewalk. Pitbulls are often mistaken for other breeds like the American Bulldog or the Dogo, so make sure when looking at a Pitbull, you are comparing the actual breed to a German Shepherd.

The Pitbull Terrier is much smaller and compact, standing at 17 to 21 inches tall, and weighing 30 to 65 pounds. Because of their short coat, they appear very muscular, compared to the German Shepherd whose coat is much longer, and although he is much bigger, you can’t really see any of his defined muscles.

The German Shepherd stands much taller at 22 to 26 inches and weighs heavier, between 50 and 90 pounds. So if you are seeking a smaller pooch, then the Pitbull Terrier would probably make the better choice!

The German Shepherd’s coat can be medium-length or long-length, depending on whether he is short-haired or long-haired, but the Pitbull Terriers coat is very short and smooth to the touch.

The Pitbull Terriers coat comes in red and almost any other dog color that you can think of, whereas, typically, the German Shepherd’s most common color is black and tan, or completely black. Sometimes he can be found sporting solid colors such as white or even blue.

Both the Pitbull Terrier and the German Shepherd are one of the most loyal and eager to please dogs around, and super affectionate with their close family, so they are very similar when it comes to this aspect of their personality, but this is about as far as their similarities go.

Because they are both so loyal to their masters, they both tend to suffer from separation anxiety and hate to be left alone for long periods of time, so despite their bad-boy reputation, they both need to be with families that can spend a lot of time with them. They are both known for having a reputation of being more aggressive than other breeds.

The Pitbull Terrier is much more sociable than the German Shepherd, and he loves to be everybody’s best friend, so for this reason he surprisingly makes one of the worst guard dogs; however, with that being said if he feels that his family are in real danger then he would undoubtedly protect them.

In addition to the above, the German Shepherd is known to be a one-man master, so while he will respect every family member as part of the pack, there will only ever be one true pack leader in his eyes.

The Pitbull Terrier accepts everyone as his master as long as he is taught this from an early age, so he has no family favorites, so whoever is in the mood to give him the most treats and belly scratches that day is going to be the receiver of the doggiest snuggles that night!

These guys are known to be quite similar when it comes to their daily exercise needs. They both require around one hour of exercise a day to keep them physically stimulated and healthy, so they both need to be placed with active families who can offer them this, otherwise, these powerful dogs will become restless and bored and that is not good for anyone involved!

They are both intelligent canines so it is advised to switch up their exercise routine and offer them a variety of different activities throughout the week, such as brisk walks, jogs, a swim in the lake, or a game of frisbee and fetch, otherwise they risk becoming bored.

The German Shepherd, again, is more independent, so during his chill time, he is happy to take himself off for a snooze, or join his master for an afternoon of daytime telly. German Shepherds are less intense than Pitbulls when it comes to exercise.

Pitbulls will need more dog toys at your disposal that can withstand the abuse, to keep them busy. Interactive games such as tug of war or playing with the hose on a warm day will keep him happy and busy, as well as act as a bonding session for you both.

The German Shepherd’s guarding tendencies over his family members means that he needs to realize that strangers do not necessarily mean danger and that most other humans and animals mean no harm, otherwise he is known to become overprotective.

Thankfully though, because they are both eager to please their master, they are both a dream to train, and as long as you are consistent, and you utilize positive reinforcement training, then you will have them sitting and giving paw in no time!

Ensure that the entire family is involved in their training and that the same command words are used to avoid confusion, and they will both see everyone as part of the pack which creates a happy family dynamic.

The Pitbull Terrier’s lifespan, on average, is 12 to 16 years, whereas the German Shepherd’s lifespan is much less at 7 to 10 years. Health is a big factor, not only for financial reasons but also for knowing how many years you and your best friend will spend together.

Both the Pitbull Terrier and German Shepherd suffer from Hip Dysplasia, and the German Shepherd also suffers from additional Elbow Dysplasia. The Pitbull Terrier is more prone to skin allergies, with grass allergies being the most common, but this can be alleviated with medication and high-quality kibble. He is also prone to Cerebellar Abiotrophy, which can reduce his mobility, as well as cognitive function, caused by damage to a particular part of his brain.

The German Shepherd is prone to Degenerative Myelopathy, which is a progressive disease of the spinal cord which affects his mobility in his hind legs, and he often has a sensitive digestive system that can be alleviated with a high fiber diet.

Of course, every dog is different, and some are more sedentary or energetic than the average dog of their breed, so you will need to assess your dog’s individual needs and lifestyle.

Similarly, both of these guys being energetic muscular dogs will do well on a high-protein diet that is going to give them the energy to sustain them throughout the day and maintain their muscle mass, so be sure to feed them both high-quality kibble that offers them a minimum of 25% protein, but if you can, feed them kibble that offers more in the region of 30% protein.

The Pitbull Terrier and the German Shepherd are very different when it comes to their grooming, so this is a big factor to consider if you are thinking about inviting one of these guys into your home. The Pitbull Terrier has a short and smooth coat that only needs a quick brush once a week.

Remember, it is important to work with a reputable breeder and to avoid puppy farms at all costs, otherwise, it is likely that you will have an unhealthy puppy who hasn’t had the best start to life.

Remember that many states employ Breed Specific Legislation, which affects both the Pitbull Terrier and the German Shepherd, so be sure to check out your local laws to see if this will affect you financially, as well in other areas, such as housing and insurance.

On the other hand, with both breeds commonly found in rescue shelters simply because their owners underestimate their needs, you really should consider adoption as an option. The Pitbull Rescue Center lists adoptable Pitbulls (and other Pitbull mixed dogs) across the country, and the American German Shepherd Rescue Association lists adoptable German Shepherds.

Overall, the Pitbull Terrier and the German Shepherd are similar in their love for their humans, and they are both one of the most loyal canines around. Not only does this make them really obedient, but in these guys you know that you have got a friend for life. They can become even more interesting when they get mixed together.

The Pitbull Terrier is more sociable and friendly with unknown humans, so for this reason he is happy for anybody and everybody to be in his house, whereas the German Shepherd is much more aloof and cautious of strangers. Both of these traits are suited to the right family home, so all you need to do now is decide which pooch would suit you and your lifestyle better, but know that either dog is just as adorable and loving as the other, so everyone’s a winner!