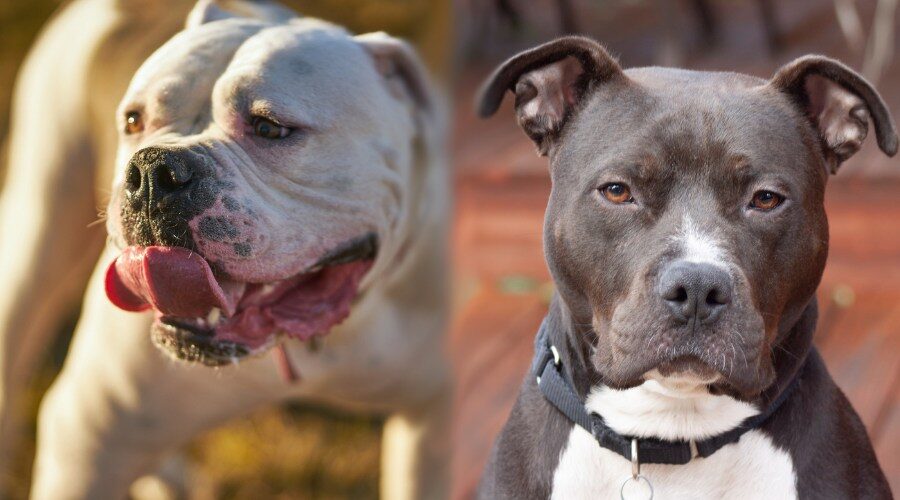 If you aren’t familiar with the breeds, the American Bulldog and the Pit Bull can seem like one and the same. They’re actually quite different, with different histories, sizes, and personalities. How can you tell the difference between the two breeds?

The American Bulldog and the APBT were both developed in America from dogs that were originally used for bull baiting in England before it was outlawed in 1835, but that is where the similarities in their history end.

Working class immigrants brought the Old English Bulldog to America and further developed the breed to work on farms. The dogs were used for all-around farm work, but they were especially good at managing cattle and hunting invasive wild pigs.

The American Bully’s popularity started to decline in the first half of the 20th century and nearly went extinct by the end of World War II. A few breeders saved the breed and bred them to primarily be family companions rather than farm dogs.

The APBT was originally brought over from England to be used in dog fighting rings or for ratting, which took place in a pit. Ratting was a betting sport where people bet to see whose dog could kill the most rats the fastest. The pit helped keep the rats in place and lent itself to the breed’s name.

Eventually, dog fighting and ratting became less popular, and Pit Bulls became farm dogs and family companions. They have amazingly impressive bite inhibition toward humans thanks to their days as fighting dogs because their owners needed to safely remove their dogs from ratting pits or dog fighting rings.  They are also a very common dog to get mixed with other breeds, like the labrador.

The biggest difference between the American Bully and the APBT is their size.

The American Bully is much larger, standing 22 to 27 inches tall at the shoulder and weighing 60 to 120 pounds or more.

The smaller of the two breeds, the APBT stands 17 to 21 inches high at the shoulder and only weighs 30 to 60 pounds.

Another difference between the breeds is their color. American Bulldogs are usually white with black, brown, red, or brindle patches. They often have black “eyeliner.” Pit Bulls, on the other hand, can be just about any color.

As you will see, American Bulldogs and American Pits have some similarities and some differences when you compare their temperament, training, and exercise needs side by side.

American Bullies and Pits have very similar temperaments. They both love people and don’t do well left alone for long periods of time. Both breeds can be trusted with children better than you would expect – although you should never leave any dog alone with small children.

The primary difference in temperament between these two breeds is how well they tolerate other animals. Pitties, with their more recent dog fighting lineage, can be more aggressive toward cats, other dogs, or any other small animal they may see as prey.

That’s not to say that American Bulldogs automatically get along with other animals. They may also attack other animals; they’re just easier to socialize when they are young to decrease the likelihood of them trying to kill other animals.

Whether you choose an American Bully or an APBT, either breed may not do well at a dog park. While they may not start a fight, their tenacity often means they’ll be the one to finish it, with potentially disastrous results.

These dogs are not ideal for novice dog owners or those who don’t like to spend a lot of time training their dog.

Both breeds were bred to work all day, and both breeds have plenty of energy. They need at least an hour of exercise every day, preferably in a large fenced-in backyard. They can be jogging buddies, but American Bulldogs may be prone to overheating, especially if they have a short muzzle.

Conditions that American Bullies and Pits are prone to include:

The grooming needs for American Bullies and Pit Bulls are the same. Both dog breeds have short hair and are mild to moderate shedders.

Both breeds will benefit from being brushed once a week with a rubber brush to help distribute their natural oils and remove loose hair. Occasional bathing with a shampoo made for dogs will help them stay clean and shiny.

Which Breed is Better:?

Neither breed is “better” than the other in general. Both dog breeds can be great family dogs. The only way to decide which breed is better for your family is to do your research.

For example, the American Bully can weigh twice as much as an APBT and will eat significantly more. On the other hand, American Bulldogs are more likely to be friendly with your other pets than Pit Bulls.

Do American Bulldogs or Pits Bark a Lot?

Neither American Bulldogs nor Pits are especially frequent barkers. They may bark when bored or excited, but they aren’t as known to be chronic barkers as other dog breeds.

However, Pit Bulls do like to “talk” a lot. They make a wide variety of vocalizations in their attempts to communicate with their humans. If you find this behavior adorable, then the APBT may be the better choice for you. If whining and other unusual dog sounds bother you, then you should probably go with the American Bully instead.

Many people bring home these dog breeds thinking that they will make excellent guard dogs. While both breeds can look intimidating (especially the larger American Bulldog), they are usually much too friendly to be good guard dogs.

They may decide to protect your family from attackers, but they’re just as likely to let a burglar in and show them where you keep your valuables. With that being said, their appearance alone may be enough to scare off the average intruder.

Both American Bulldogs and Pits are mild to moderate shedders. They shed a little bit all year round. Weekly brushing with a rubber brush and occasional baths with dog-safe shampoo will help keep shedding to a minimum.

Which Breed is Better for Families?

American Bullies and Pitties are both quite good with children. As long as you can give them plenty of exercise and don’t leave a dog alone with a small child, either breed will do well in a family.

There is a common misconception that Pit Bulls have locking jaws that make it almost impossible to pry their jaws open. In fact, their jaw structure is no different than any other dog breed, and their jaw doesn’t lock into place. However, Pit Bulls are tenacious and stubborn and may hold on to things longer than other dogs. This means that you’ll need to make sure you have some durable toys to hold up to their chewing power.

Beyond that, Pits don’t have the strongest bite force of any dog breed. Neither breed has a bite force that even cracks the top 10 of the most powerful dog breed bite forces.

Can Either Breed Live in Apartments?

Both breeds have high exercise requirements, and they may not have the option of playing at the local dog park. If you choose to have either breed in an apartment, you need to be dedicated to spending at least one hour every day walking or jogging with them on a leash. American Bulldogs and Pit Bulls do best in homes with large, fenced yards.

While there are no guarantees in life, the best ways to ensure your dog lives the longest, healthiest life possible are to get them from a reputable breeder, feed them a high-quality diet, brush their teeth regularly, and prevent them from becoming obese.

How Can I Find a Reputable American Bully or Pit Bull Breeder?

Pit Bulls and other “bully breeds” are often the most popular dog breed in shelters. You may choose to start your search for a new furry family member there.

If you really want to get a puppy, you’ll want to put in a little research to find a breeder who is more concerned with the health and happiness of their puppies rather than simply making money. To increase your odds of finding a reputable breeder, avoid:

As you can see, there are many similarities and differences between the American Bully and the APBT. Either breed could be right for your family. Make sure you do your research to pick the dog breed that is best suited for your family life.

Since the biggest difference between the two breeds is their size, you should seriously consider how much dog you want to care for. Larger dogs eat more, cost more, and poop more – but they also make great family pets and enormous lap dogs.

The other factor to consider is breed specific legislation (BSL). Most BSL forbids Pit Bulls and other breeds from living in certain areas. American Bulldogs may or may not be included in BSL where you live or plan to travel, so make sure you research local laws before you bring home either dog breed.

If you have the energy to exercise and train your dog, your American Bully or Pit Bull could make an excellent ambassador around your neighborhood for scary-looking, misunderstood bully breeds.

Hopefully, we’ve provided you with the information you need to decide which of these wonderful breeds is best for your family.

Thank you for the information. I wasnt sure if my Samson was a bully or pit. But now I know hes a bully! Hes white with black spots. Very loving dog.

Thanks for the comment Nanette! Glad we could help!

Thanks, and yes!, we have an American bull (100 lb), she is very gentle, my husband always says that this breed needs to be socialized when they are puppies, they need boundaries and, as a responsible pet parent, we need to spend time with our big girl, she does very good, is healthy, but yes, is a whole budget (food, pills, vet, big toys), she does very good with our other dog, a cocker spaniel (20 lb).

We walk them 2/day and pretty much we take them to have dinner or even camping, they are good with adults and kids. If you are thinking to get an American Bull, please consider that you will invest a lot in time, food, picking big poop up, vet,...but you'll get an amazingly lovely, trained, socialized, four-legged buddy for life, American Bull is an incredibly smart breed, do your part! When in good hands they are the best dog ever!