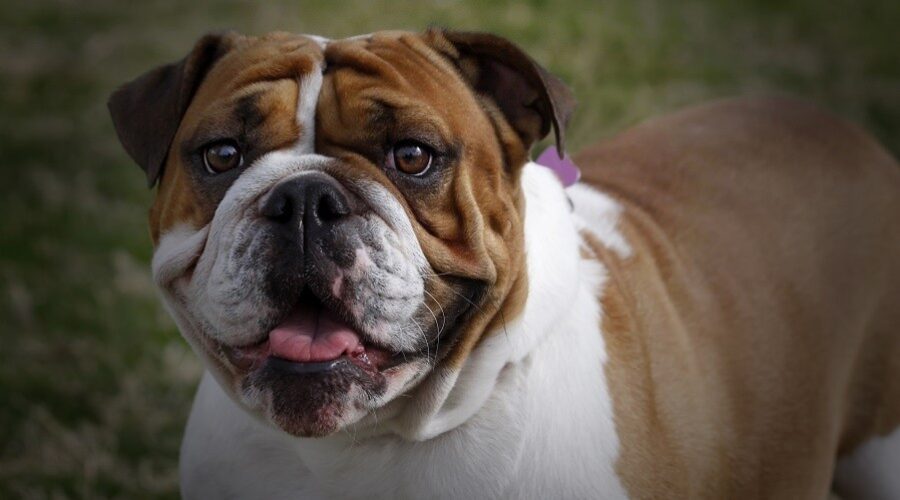 The bulldog is one of the most easily recognizable breeds in the world! With his squat, sturdy frame and wrinkled, jowly face, these pups’ certainly don’t go unnoticed in the dog park. So, it’s no surprise that bulldogs are extremely popular as family pets, ranking at number four of 193 breeds, according to the American Kennel Club. The AKC classes the breed as members of the non-sporting group.

They are pretty low-maintenance dogs, requiring only a moderate amount of grooming and exercise. That, together with a gentle, sweet, people-oriented disposition makes the bulldog a wonderful family pet. In this article, we find out more about the breed, including taking a look at his history, his character, and the health issues that can affect the breed.

So, is the bulldog the ideal four-legged friend for you? Let’s find out!

It’s thought that bulldogs first appeared in 13th century England, specifically for the “sport” of bullbaiting. These dogs were probably much larger and heavier than their modern relatives and most likely had a more aggressive temperament, as they were bred for fighting.

In 1835, bullbaiting was banned. However, the bulldog continued to be used in the pit-dog fighting events that took place around that time in the shady, underground world of gambling dens. To produce the perfect fighting dog, gamblers crossed the original bulldog with various terriers, resulting in the appearance of lighter-weight, smaller breeds such as the bull terrier and pit bull terrier.

By 1886, the breed was much more like the breed we know today. These dogs were smaller, sweeter tempered and more mellow, rapidly becoming family favorites as pets. The bulldog, with his Churchillian features, was adopted as the national symbol of England, thanks to his striking resemblance to Winston Churchill, England’s Prime Minister during World War II.

Today, most bulldogs enjoy a quiet life as family pets. However, there are some exceptions, as Rudy proves in this video clip!

Bulldogs might look full of character, but their conformation can predispose the breed to multiple health problems.

Bulldogs, like other flat-faced breeds, are classified as brachycephalic dogs. Brachycephalic dogs have a narrowed upper airway, which often causes breathing difficulties, especially during hot weather or exercise, and bulldogs tend to snore and snuffle too.

Other health problems that are common in bulldogs include:

Because of their heavy stature and flat faces, bulldogs are incredibly susceptible to heatstroke. For that reason, they would not be a suitable pet for you if you live in a region where the summers are typically very hot or humid.

Although some bulldogs do compete successfully in activities such as flyball and agility, many receive only a moderate amount of exercise. That’s fine, provided that you take care not to overfeed your bulldog. Obesity can be a problem for these pups, as being overweight only serves to exacerbate their health issues.

Bulldogs don’t need a vast amount of exercise. They do enjoy a game, and there are some who are very successful in sports such as flyball and agility. However, the average bulldog isn’t built for speed and will be quite content with a sedate stroll through the park a couple of times each day and perhaps a gentle game in your garden.

This tenacious breed is smart, but he can be a challenge to train, even with easier tricks. That’s because these pups prefer to think for themselves, rather than follow commands! However, attending early socialization and obedience classes can ensure that your bulldog puppy grows up to be as respectful and mannerly as any other breed.  You don’t want a stubborn little guy like the bulldog to end up with bad habits.

If you plan to train your bulldog to walk with a harness, you should start at a very early age since these pups love to pull.

A male bulldog can grow to weigh a hefty 50 pounds. Females weigh a little less at around 40 pounds. Both sexes grow to be about 14 to 15 inches tall at the shoulder. If you are thinking your family will need a smaller dog, consider looking at a French Bulldog, because their size is smaller when compared to an English Bulldog.

If you want a dog that will be happy living outside in a kennel, you’ll need to look elsewhere. The bulldog is very intolerant of warm weather and can quickly overheat, which can be fatal. Your bulldog must live inside your home, and you’ll need to crank up the air-conditioning too when warm weather arrives.

If you have a swimming pool or a pond in your garden, be sure to keep your bulldog well away from it. Bulldogs are very poor swimmers thanks to their huge head, solid body, and short legs, which make it extremely difficult for the dog to keep his head above water.

Bulldogs will thrive on any good-quality dog food, provided that they are not overfed. Follow the manufacturer’s guidelines on the product label to see how much you should feed your bulldog. If you’re in any doubt, ask your vet for advice on the best diet for your burly canine chum.

They have a short coat that doesn’t shed much. It’s also common for all English Bulldogs to have a spotted coat, with many different colors. You can find bulldogs in a range of colors, including:

The bulldog is a low-maintenance breed that doesn’t need much brushing. A gentle going over with a soft bristle brush a few times each week will be enough to keep your bulldog’s coat shiny and in good condition. Shedding increases during the spring and fall, when you’ll need to brush your dog a little more often.

Bulldogs don’t generally smell too “doggy,” so you won’t need to bathe your dog too often.

The most important part of your bulldog’s grooming regimen is the care of his wrinkled face. You’ll need to clean your bulldog’s wrinkles with a soft, damp cloth, ideally daily, but at least twice a week. After cleaning, be sure to dry the wrinkles gently. Moist areas amongst skin folds make the perfect breeding ground for bacteria, which could set up an infection.

So, would the bulldog make the perfect family pet for you?

Does the bulldog sound like the perfect pet for your family?

Great! Now, let’s find out where you can buy a puppy.

A good starting point in your search for a well-bred bulldog puppy is the American Kennel Club website at this link. Here, you’ll find a list of licensed, reputable breeders in most areas of the U.S.

Also, check out the Bulldog Club of America website for details of good bulldog breeders. It’s a good tip to look for dogs that are bred from parents who have some sporting pedigree in agility classes and similar, rather than purely in the show ring.

Ask the breeder if you can see the puppy’s parents and siblings. That will give you a good idea of what kind of temperament the puppies will have when they grow up. The breeder should also be willing to show you their breeding dogs’ health screening certificates so that you can be confident your puppy will be healthy and free from congenital defects.

The cost of bulldog puppies depends on several factors including, where you live, the puppy’s sex, and whether he comes from a prize-winning line. Currently, bulldog puppies are fetching from $1,500 to around $5,000. Wow!

Why are the puppies so expensive?

Well, thanks to the bulldog’s physical build, giving birth naturally is difficult and dangerous for the mother dog. For that reason, bulldog puppies are born via caesarian section. That means big vet bills for the breeders, and some of that cost is passed on to would-be  owners. Also, because of the multiple congenital health problems, the breeder has to bear the expense of many health tests and screening procedures.

As a general rule of thumb, if you see a bulldog puppy advertised for less than $1,500, walk away. Cheap puppies usually come from puppy mills.

So, what’s a puppy mill?

If you’ve never heard of puppy mills before, you need to know that you should never buy a puppy from one.

Puppy mills attract customers by asking very low prices for the puppies that they breed. Unwary would-be dog owners are then tricked into buying a puppy that is most likely sickly and will almost certainly have been born to parents that have not been health screened. Sadly, many puppies purchased from puppy mills die within a week or so of arriving at their new home.

Puppy mills exist to produce as many puppies as possible, as quickly and cheaply as possible. Usually, the dogs are kept in appalling conditions in bare cages and used as breeding machines.

Always buy a bulldog puppy from a licensed breeder who is prepared to show you around their kennels and introduce you to the puppy’s parents. If the breeder offers to bring the puppy to your home or wants to meet you somewhere to exchange money for the pup, alarm bells should ring immediately!

Sadly, there are many unwanted bulldogs and bulldog mixes in rescue centers and shelters around the U.S., and if you’re happy to take on an adult dog, these can be a great place to find your new best friend.

There are rescue centers located all around the country, and an excellent place to start your search and make some valuable contacts is the Bulldog Club of America Rescue Network. Also, check out Petfinder.com where you can search online for a bulldog.

When you rehome a dog from a rescue center, you’ll need to make a donation to help with the charity’s running costs. Also, most shelters and rescue charities will insist on visiting your home to check its suitability before they will let you take a dog from them. Some shelters run a scheme where you can take the dog home on a trial basis to see if he’s the right fit for your family.

Although most shelters will assess each of their dogs to make sure they have a good temperament, it’s likely that the bulldog you choose won’t come with any health screening paperwork, so you’ll need to have him examined by a vet right away.  Most shelters will also take in mixes, and you’ll likely find different kinds of interesting Bulldog mixes (like the Beagle Bulldog mix) that you may be able to adopt!

If you want a steady, quiet companion who doesn’t need a lot of exercise, won’t shed much and is loyal and devoted, a bulldog could be the right choice of pup for you.

Although bulldogs can make excellent family pets, they do come with quite a lot of potential health issues and their life expectancy is quite short compared with other breeds. Also, they are not the most easily trainable of dogs, and they do tend to have a mind of their own!

Well-bred bulldog puppies are very expensive, so if a puppy seems like a “bargain,” beware; he could be from a puppy mill. If you don’t want the hassle of looking after a puppy, you could consider adopting an adult bulldog from a rescue center or shelter. Try checking out the links we’ve provided. You never know, that could be your first step on the road to finding your perfect companion!

27 Dog Tricks You Can Teach Your Pup Right Now