Are you thinking of adopting a bulldog but can't decide between the French Bulldog or the English Bulldog? They both have many similarities and some differences to be aware of. Find out which breed is a better fit for your lifestyle! 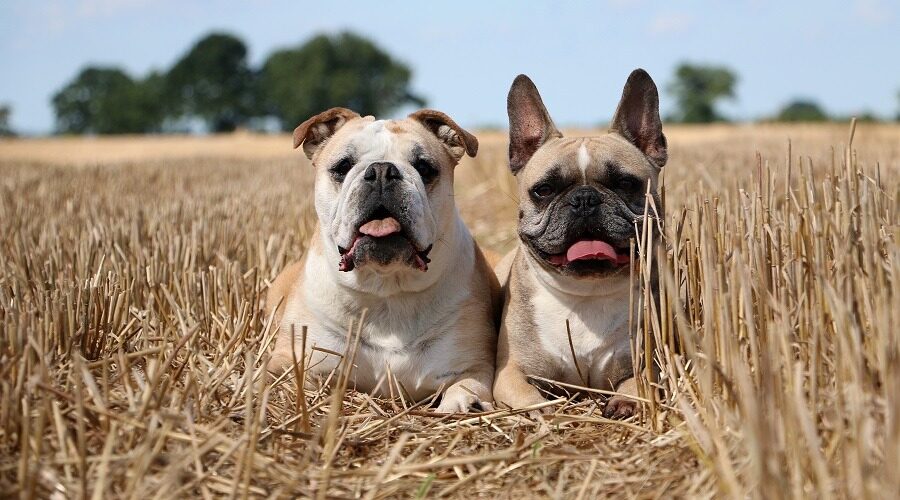 So, whether you are trying to decide between choosing the medium-sized English Bulldog, or the small-sized French Bulldog, read on to find out the finer details that will undoubtedly help you to make your final decision.

The French Bulldog is a descendant of the notably larger English Bulldog, however, their historical journey separated when the French Bulldog left England for a much warmer climate in France.

Despite his name, the French Bulldog is not French; he hails from England. In the mid-19th Century, smaller English Bulldogs became very popular with the lace traders in central England, particularly around the markets of Nottingham. When the demand for their lace decreased in England, the traders set sail across the Channel to the northern French countryside with their pups in tow. Almost as soon as he landed, the smaller Bulldog became an instant hit.

Over several decades, he was crossed with other smaller breeds such as the Pug, and possibly other Terrier-type dogs. He then gradually found his way into the laps of the French aristocracy in Paris and other rich cities.  He is commonly mistaken for the Boston Terrier.

Towards the end of the 19th Century, he had spread his wings and became popular across Europe and America, It was the Americans who insisted that he keep his iconic bat ears. However, his popularity never took off in England, as the English nation was very protective of their English Bulldog, and they felt the French Bulldog’s popularity might threaten their national symbol.

However, he is still very popular, and thanks to his adorably alternative features and playful persona the American Kennel Club (AKC), in 2019 ranked him as the 4th most popular dog breed in America.

It is believed that the English Bulldog was developed in the 13th Century in England for the purposes of Bull Baiting. The English Bulldog in those days was ferocious and their jaws were tremendously strong, and it seemed that he could never be injured in the ring.

In 1835, this cruel blood sport was made illegal, and the fighting went underground. Spectators wanted a more agile dog, so they bred English Bulldogs with Terriers. This was when American Pitbull Terriers amongst other fighting dogs were born.

The English Bulldog became unemployed, and in an attempt to save the breed from extinction, fanciers bred them to be more gentle and sweeter in their temperament.

The once thuggish canine soon became a lovable rogue, who makes a great family pet. He is now the face of many companies and famous sports teams across the world, but he is probably most famous for being closely linked with one of England’s Prime Ministers, Sir Winston Churchill. He was known to many nations as the ‘The British Bulldog’; tenacious with unrelenting courage, with a stern but droopy smile being their main similarities.

It is the ears and the skin that are the most notable difference between the two. The French Bulldog has tall and erect ears, that resembles a bat, whereas the English Bulldog’s ears are set on the side of his skull and drop down into a rose shape.

They share a similar coat that is short and smooth, but the English Bulldog has a wider variety of coat colors. They also tend to have a curly tail similar to that of a pig. On occasion, they will both have a corkscrew tail, which is slightly different than a curly tail, but reputable breeders will not breed dogs with this type of tail as it tends to come hand in hand with spinal problems.

Despite their differences, they are kooky-looking dogs, and it is their flat faces and large puppy dog eyes that win hearts across the globe.

The French Bulldog and the English Bulldog are both sociable creatures who crave human attention. They both love to snooze on their master’s lap. Because they are so sociable, neither of them likes to be left alone for long periods of time, and they are both known to suffer from separation anxiety.

The French Bulldog and the English Bulldog both make for great family pets, their small size and incredibly gentle and patient nature mean that they are perfect for children who are learning how to look after and handle a dog. But, as with any dog, children should never be left unsupervised!

The French Bulldog is more of a fun-loving pup who constantly likes to be the center of attention. They are silly and love to show off their clown antics. The English Bulldog is much more relaxed, it would be safe to suggest that he is one of the most laid-back dogs in the canine kingdom! Although he loves to have fun, he will do so laying upside down with his belly and legs in the air, expecting his master to do all of the hard work.

The French Bulldog and the English Bulldog are very similar in their energy levels, in that they are both low energy pups who are super chilled. They will both only need around 20 to 30 minutes of exercise a day, all of which can be a walk around the block for a leg stretch and a toilet break. Neither of these guys requires intense exercise, and they are both happy to chill and nap all day long.

Because they are both Brachycephalic dogs, neither of them copes very well in the humidity or heat, so be sure not to exercise them on warm days. Their exercise needs will have to be adjusted and ideally, they should only be walked either early morning or late evening when it is much cooler.

The French Bulldog is intelligent, and he will pick up commands quite easily. However, he is also known to be independent, so you need to be consistent with your training. Do not give in to his stubbornness, for once you start to give up you will never win the training battle again! If you plan to train walking with a harness, make sure the harness is the right size.

And then there is the English Bulldog, and boy is this guy one of the most stubborn creatures on this planet! Lazy and stubborn is a difficult combination to master, and for this reason, this guy is not for a first-time dog owner.

If it is important for you to have a fully obedient pup, then he is not the one for you. Some days he will listen, some days he will not, and rarely do owners go a full week without dragging this guy along the sidewalk because he has given up walking. Bulldogs also need harnesses that are fit for them, or leash training can be difficult.

The French Bulldog and the English Bulldog need to be socialized early to ensure that they are comfortable in all situations and with people and animals of all different shapes and sizes.

The most important health issue to be aware of when it comes to the French Bulldog and the English Bulldog is Brachycephalic Syndrome. This is caused by their flat faces and poor respiratory structure, which causes issues with their heat control and their breathing. During warm days, be sure to monitor them, ensure they are in a cool and airy space, and that they are well hydrated.

Hip Dysplasia – An abnormal formation of the elbow and hip joints that can cause painful arthritis in later life.

Patella Evaluation – Where the kneecap pops out of place, and it can be extremely painful to walk on.

Ophthalmologist Evaluation – This evaluation screens for a list of eye issues, such as Progressive Retinal Atrophy, Entropion, and a defect known as ‘Cherry Eye,’ to name a few.

Cardiac Evaluation – This evaluation screens for a list of heart defects.

Overall, the English Bulldog lives between 8 to 10 years, whereas the French Bulldog lives longer between 10 to 12 years. They are both prone to suffer a longer list of health problems compared to the average pup, and this is a serious factor to consider if you are thinking about welcoming one of these guys into your home.

Because of their vast amount of skin allergies and other health issues, it is crucial to ask the Veterinarian about what to feed them both, as they may require a special diet or a particular kibble to alleviate the symptoms.

The French Bulldog and the English Bulldog have similar grooming needs. They both only require occasional baths as long as they don’t get too dirty exercising; once every 2 or 3 months will be adequate.

Because of their skin allergies be sure to use gentle products, and refrain from washing them more than the recommended amount as you risk damaging their natural coat oils and sensitive skin.

The French Bulldog and the English Bulldog both have short coats that will only require brushing once a week, and this is simply to keep them looking shiny and healthy. They both shed when the months start to warm up.

Despite being relatively easy to care for when it comes to their bathing and brushing, their skin folds and rolls do require a little extra attention than the average dog. They can often emit a musty canine smell if not cared for properly, and while you should stick to the recommended amount, washing them thoroughly and also drying them thoroughly is the key. It is important to clean between each wrinkle and fold with a special cleaning solution and a cotton bud in order to stop sores and infections from developing.

There is no escaping the fact that these guys are adorable in their own way, and whilst they might look different from one another, you can see that they are definitely related. The French Bulldog is much smaller in size, but he is much more mischievous and playful in his temperament, whereas the English Bulldog is horizontally laid back!

Whichever pup you prefer, or whoever will suit your lifestyle better, they are both fun-loving and affectionate dogs that everyone will adore!