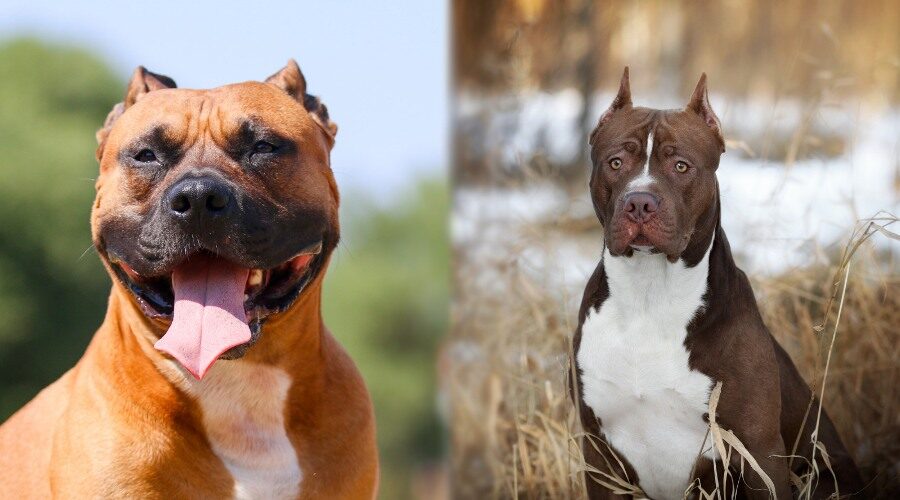 They are equally striking in their looks, and under that (some would say) intimidating appearance, he is a big softy at heart. They are so similar that many people believe that they are even the same breed.  Both dogs are actually often compared to the American Bulldog as well.

The word ‘Terrier’ derives from the Latin word, ‘terra’, meaning earth. All Terrier dogs were created to go into ground and hunt vermin, either to scare them out of their burrows for their master to cull, or to do the deed himself. For this reason, they were typically small, however in the 19th Century, Terriers, for their agility, were mixed with Bulldogs, for their muscle, in order to create larger and more powerful dogs. These dogs were then used for dog fighting and bull baiting. However, in 1835 dog fighting was banned in England, and immigrants who wanted to continue in the cruel sport took off to America and continued to fight them.

American dog fighters wanted to breed even bigger and more powerful versions of the fighting dogs from England and as a result, the Am Staff and the Pitbull were born. It is their fighting history that has unfairly earned them their vicious label. The Pitbull was recognized by the United Kennel Club (UKC) as their first dog in 1898, and the UKC will allow Am Staffs to be registered as American Pitbull Terriers. However, the American Kennel Club (AKC) recognize the Am Staff, but they will not recognize the Pitbull.

The Am Staff was originally called the Staffordshire Terrier, but the name being too similar to his cousin across the pond, the Staffordshire Bull Terrier, was changed in 1972 to American Staffordshire Terrier. The Pitbull, being the most closely linked to their shared fighting history, also had his name changed in 1996 and 2004, to ‘St Francis Terriers’ and ‘New Yorkies’ in the hope that his past would no longer be associated with him and that more people would adopt him, but this was soon dropped after much criticism.

The multitude of name changes, and politics amongst kennel clubs in their registration rules, has created much confusion in the canine world between these two breeds. And whilst some believe that they are the same breed due to their almost identical appearance, with the Am Staff just being the chunkier brother and the Pitbull the more athletic sibling, the mainstream opinion is that they are separate breeds.

They are both well-balanced dogs, and with the large square heads and muzzles, and their defined muscles, in the Am Staff more so, they have a combination that gives them their powerful appearance. It is also common for them both to have their ears cropped, again, this adds to their mean exterior. If they aren’t cropped, their ears are normally either rose shaped or half pricked.

Both the Am Staff and the Pitbull are available in a variety of colors. Generally, kennel clubs will not accept black and tan or liver in the Am Staff, and white that covers 80% or more of his body is not encouraged, and merle is not accepted. The Pitbull is welcome to be any color except merle.  The red nose variant is the second rarest color.  The merle gene has recently made its way into the gene pool from out breeding, and so despite the increase in popularity, this is not a traditional color in either breed. It is also common for them both to have different color patches across their body. Of course, neither of these dogs are accepted if they are albino. Their coats are both short, smooth and shiny. This tight coat enhances their muscular frame.

The most common question asked by those who don’t know either breed is ‘are they vicious?’. The answer is no, they are not inherently vicious, and as the famous saying goes, a dog is just as good as his owner. In reality, the Am Staff and the Pitbull are no more vicious than a Chihuahua, it is entirely dependent on their upbringing and their owners. The American Temperament Test Society conduct temperament tests every year with a vast variety of dogs. The latest results show that 86% of Am Staff’s passed the temperament test, and 87% of Pitbull’s also passed, and with the samples being 743 and 931 respectively, no one can argue that the samples weren’t large enough to be conclusive. If this is compared to another well-known dog, the Collie, whose sample was 896, only 81% of them passed the temperament test.

They are very sociable and happy-go-lucky canines who adore their master and their family. They also both have a soft spot for children, and this is how they inherited the name ‘nanny dog’. Whilst we would never suggest leaving a dog alone with a child, this is one of the many reasons they make such a great family pet. They love to have a good romp around in the garden and play interactive games, so both of these guys will provide you with hours of bouncy entertainment.

Of course, this is not the same for every Am Staff or Pitbull, but this is a generalization and is something that you need to consider if you are a multi-pet household, or if you are walking your pup in public. For this reason, neither of the breeds are suitable for a novice owner, but ultimately training and the owners are equally responsible for this behavior.

If you don’t own or know an Am Staff or a Pitbull, then a great way to see them in action is on Instagram. Wesley is a Pitbull has over 97K followers who have joined him on his journey, from being homeless to tackling his stranger fear aggression, to being a snuggle bug with his family and other dog friends. Nala is an Am Staff who also shares her doggy life, and she is equally as cute!

Both the Am Staff and the Pitbull are similar in their exercise needs, they are both medium energy dogs who require up to 60 minutes of exercise a day. Being the more athletic version, the Pitbull would enjoy slightly more exercise, whereas the Am Staff is more partial to an afternoon nap. However, they both have a lot of energy that needs to be expelled, and the best way to do this with these guys is to play interactive games with them such as fetch or agility courses.

Although they are only medium energy dogs, they require a lot of mental stimulation to prevent them from becoming bored and destructive.

You cannot skip this with these guys if you want a well-mannered pup. Luckily, they are very intelligent and combining this with their love for snacks, makes them very trainable.

Both the Am Staff and the Pitbull are healthy pups, they have the same lifespan of 12 – 16 years. They are both prone to Elbow and Hip Dysplasia, which is similar to most breeds in later life. The Pitbull is more likely to develop Cerebellar Abiotrophy, which is where the part of the brain that controls balance and coordination is damaged, and therefore he can struggle with his mobility. This is something that generally appears in later life. The Am Staff is also known to suffer with cardiac issues in later life more so than the Pitbull.

Many Terrier dogs are also known to inherit skin allergies, and although this is something that they may experience throughout their lifetime, it is something that can easily be managed with medication and nutrition. If in any doubt, be sure to speak to your Veterinarian.

They will both eat around 2 ½ cups of food a day, and should be eating food that’s recommended for Pitbulls or bull terrier breeds.

These guys are exceptionally easy when it comes to grooming compared to the average pup. A bath once every two months or so will be adequate, and a brush once a week will keep them looking shiny and healthy. Other general grooming tasks such as teeth brushing and ear cleaning are the same as any other medium sized pups.

Both the Am Staff and the Pitbull, from a reputable breeder, will cost on average $800 to $1,000. If you are after a pup from a particular bloodline, then the cost may be much more.

It is important to research reputable breeders when it comes to getting either of these breeds. Reputable breeders will only breed dogs who are gentle and friendly, and if any of their pups show aggression, they will not be bred from. If you buy your pup from anywhere else, then you are risking that he has either been bred from active fighting dogs, or worse, is violent himself. A reputable breeder will not sell a vicious dog, whereas a puppy mill will do whatever they can to make a quick buck.

Alternatively, there are hundreds of thousands of these guys in rescue shelters across America, and with over 93% of Pitbull type dogs in shelters being euthanized, rescuing is something that you should consider. Of course, you may not know his history if you adopt one, but as long as you are a firm master this is something that you can overcome together.

The Am Staff and the Pitbull have shared the same hardships when it comes to their reputation, however, when you educate yourself, or get to know one of these guys, you will quickly learn that their fierce reputation is unjust.

Ultimately, they are almost identical, so for most prospective owners about to choose either one of these guys, it really comes down to their slightly differing appearance. Either way, they are both sweet souls who have a lot of love to give!