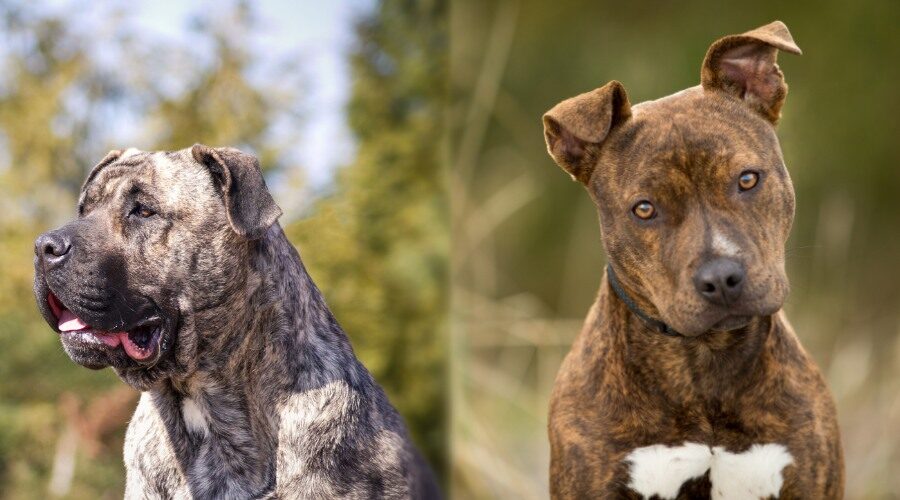 They are similar in appearance except that the Presa is much bigger and they have similar coats and grooming needs. On the other hand, the Presa is much more demanding in regard to his temperament, and the training that comes with it. He is definitely not for the first-time owner as his guarding tendencies are very strong, whereas the Pitbull is much more sociable and laidback, and therefore he could be for the first-time owner.

For the purpose of this article the American Pitbull Terrier will be referred to as the Pitbull.

The Presa Canario is a Spanish dog from the Canary Islands, and his name translates to ‘Canary catch dog’. He was traditionally used to herd cattle, but primarily to guard his flock of animals from wild dogs, and to exterminate them should they try to attack. They almost became extinct in the mid-20th Century, however, fanciers of the breed began an intense breeding program in the 1970s, and they are now slowly but surely recovering as a breed. They are now mainly used as guarding dogs and they aren’t commonly known to be family pets.

The Pitbull is one of four dogs who fall under the umbrella term ‘Pitbull’ that is used to describe breeds that descended from Terriers and Bulldogs. The Pitbull that we are comparing in this article is considered by the majority to be the original ‘Pitbull’, and often when people refer to a Pitbull dog they are referring to this guy. The Pitbull was originally bred from fighting dogs in England, and he is the result of breeding the biggest and most powerful dogs in the ring. Once the cruel bloodsport was outlawed in America, they were soon realized to be affectionate and gentle with their humans, and as such they are now great family companion dogs, but unfortunately, they have carried their reputation with them into the 21st Century.  They are often mistaken for and compared to other large breeds like comparing the pitbull to the dogo argentino or comparing the pitbull to the american bully.

The Presa and the Pitbull are both formidably striking in appearance, they certainly stop people in their tracks, either because they are scared of them or because they are impressively beautiful canines. It is safe to say that their appearances are a bit like President Trump, you either love them or you hate them! Both of their heads are large and broad, but the Pitbull’s head is more in proportion to his body, whereas the Presa’s head, in his breed standards, is simply described as ‘massive’.  Presa’s are often mistaken for larger dogs like the Cane Corso.

They have similar coats, in that they are both short and shiny, with the only difference being that the Presa is slightly more course to the touch than the Pitbull, whose coat is smoother. The Pitbull comes is any color that you can think of, with the one exception of merle. The Presa also has a variety of colors, but not as wide ranging as the Pitbull. He comes in various shades of brown, gold and silver, the color ‘tiger’ is even on the list!

Despite being similar in their appearance they are quite different in their temperament. The first thing that should be recognized about these two guys, is that the Presa is absolutely not for a first-time owner, whereas the Pitbull can be as long as you are a dominant leader. The Presa Canario is too much of a dominant dog for a novice dog owner as he will continuously challenge the pack order, and he will continuously challenge his owner for the top-dog position. This is not a challenge to take on lightly, for if he feels you aren’t dominant enough he will become obnoxious, potentially vicious, and you will never regain the balance once you have lost this position. Although the Pitbull also needs a firm master, the average Pitbull is happy enough to not challenge the status quo. It is for this reason that Presa’s should not be taken into a home where there are children or other animals, as they will always see themselves as above them in the pack, and this can be a dangerous situation for everyone involved.

On the other hand, immediately after the Pitbull’s career in dog fighting ended, he was bred to be a family companionship dog, despite what the media would like you to believe. The Pitbulls with the gentle and affectionate traits were only used for breeding, and as such, unless they are pitched in illegal fighting rings, they are normally loving family pets. They also have a soft spot for children, which is why they were nicknamed ‘nanny dogs’. For this reason, if you have children or would like a dog for family companionship, then the Pitbull would be the better choice for you.

However, if you are seeking a guard dog, then the Presa Canario is one of the best! Originally left in the field to guard his flock, he would ward of any predator and even exterminate them if he had to. The Presa undoubtedly retains this skill, and you can rest assured at night that no one would dare attempt to enter your estate with this guy around. Even if he is not used as a guard dog, he will still guard his master and family, and he is very suspicious of strangers even once their master has welcomed them into the house. The Pitbull, however, will welcome anyone into his estate with open arms hoping to be their new best friend, so for this reason, he does not make the best guard dog.

Despite all the above, both the Presa and the Pitbull are loving with their family and would happily have a cuddle on the sofa at the end of the day. They both think that they are the size of a Chihuahua, and so you will often find these muscular lumps laying across your lap if you let them. They are both very attached to their masters, and are known to be quite affectionate and clingy, especially the Pitbull.

Both the Presa and the Pitbull are medium energy dogs, and they will both require up to 60 minutes of active exercise a day. This cannot be limited to a slow walk around the neighbourhood like with other breeds; they require intense and energetic activities, such as doggy agility courses, jogging with their master, or interactive games such as fetch or frisbee. Be warned though, you should never play a game that involves a challenge of power, such as tug of war, with the Presa for he will view this as a fight for the top dog position in the family.

Between intense activity sessions, the Presa is more likely to enjoy several naps throughout the day. Whereas the Pitbull is likely to be more demanding between the two breeds, and will require more mental stimulation.

If these guys aren’t exercised properly, then they will become easily bored and destructive. Powerful dogs such as these will create a lot of damage, so unless you can commit to exercising these guys adequately, then you really should consider another breed, as they need to expel that pent-up energy of theirs.

Similar to the Presa, the Pitbull often displays fear aggression against other dogs. Of course, this is not the same for every Pitbull or Presa out there, but this is the consensus amongst owners.  For this reason, both of these guys need early socialization with many dogs of all shapes and sizes as this will increase your chances of having a canine that doesn’t exhibit these aggressive tendencies.

Obedience training is essential for both the Presa and the Pitbull, but particularly the Presa. It would be advised that the Presa is taken to professional puppy obedience classes with a trainer who has an understanding of Presa dogs, for they are a different ball game altogether! Whilst training with the Pitbull must be consistent, training with the Presa will be a lifelong commitment. However, once you achieve obedience, they are amazing creatures to have around.

The Presa and the Pitbull are generally healthy dogs, however the Presa’s lifespan is 9 to 11 years, whereas the Pitbull lives much longer at 12 – 16 years.

They are both prone to Elbow and Hip Dysplasia which is an abnormal formation in the joints that can cause painful arthritis. In addition to this joint problem, Panosteitis and Osteochondritis Dissecans and are commonly found in the Presa as he has a hefty amount of weight to carry on his average frame.

The Pitbull can develop Cerebellar Abiotrophy, which affects his coordination and balance due to part of his brain being damaged.

The Presa will need slightly more food than the Pitbull at 3 cups a day, whereas the Pitbull only requires 2 ½ cups of Pitbull age-appropriate dry kibble each day. Giving your pup top quality kibble is the easiest way to keep him in a healthy condition.

Thankfully, as these guys require a bit more effort in the other areas, their grooming needs are relatively easy. Neither have an undercoat and so they shed little, a regular brush once a week will keep the Pitbull looking healthy and shiny, and the Presa could do with two brushes a week as his hair is a little courser. A bath once every two months will be adequate enough to keep them clean as neither of them have a strong doggy odor.

The Presa costs on average, between $1,800 and $2,000, from a reputable breeder, whereas the Pitbull costs between $800 and $1,000. One of the reasons for the significant price difference is because of supply and demand. Rescue centers are inundated with homeless Pitbull’s, whereas Presa Canario pups and breeders are quite rare to find.

The Presa Canario and the American Pitbull Terrier are similar in appearance, with the Presa being the bigger version of the two. The Presa is likely to be too much to handle for an inexperienced owner, whereas the Pitbull is much simpler to train and keep in line. If you can train them both to the desired standard, and you can maintain the pack order, then they are both loving dogs with their family.

If you are still deciding between the Presa and the Pitbull, then the best way to choose between the two is to think about the purpose that you want your dog to fulfil. If you are seeking a guard dog, then you should choose the Presa, and if it is a family dog that you are after, then the Pitbull is the one for you.

Is a dogo Argentino a good dog to have for a house pet and family pet?

Hi Wilbert! Dogos can be great dogs, but they are stubborn and headstrong. They aren't recommended for first-time dog owners. If you can handle a dominant breed, they can be amazing pups!