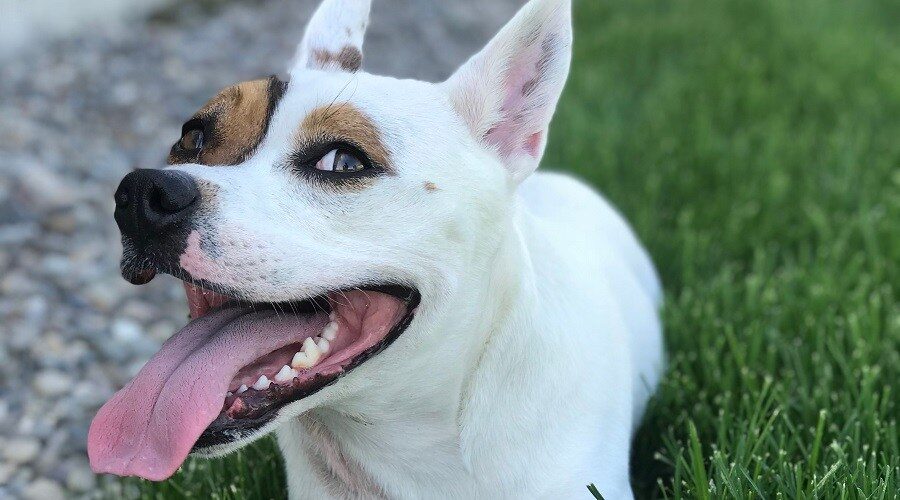 The Pitbull Corgi mix is also called a Corgi Pit. This seldom-seen designer breed combines the Pembroke Welsh Corgi and the American Pitbull terrier to create an unusual hybrid.  In fact, this Corgi Hybrid might raise some eyebrows when walking on the scene.

The Pitbull Corgi mix is a relatively new crossbreed to appear on the designer dog scene. It’s thought that the very first Corgi Pits were bred in the 1990s. Corgi Pits are intelligent, lively, and loyal dogs that could make a great pet for you and your family.

These dogs are medium-sized, making them suitable for a small house or larger apartment. Because both breeds can be independent and strong-willed, an experienced dog-owning home is recommended.  If you aren’t up for an active breed, there are other pitbull mixes that might be worth considering.

A designer dog is simply a crossbreed, or mongrel, as these pups were traditionally known. Designer dogs are not just your common or garden mutt, though! A genuinely mixed breed is created by mating two purebred dogs. And did you know that virtually every purebred dog comes from many generations of crossbreeding?

Unfortunately, much overbreeding has taken place to refine the physical characteristics of purebred dogs, leading to many inherited health problems. It’s a popular viewpoint that most crossbreed dogs are healthier and longer-lived than their purebred cousins.

The American Pitbull Terrier breed has his roots in Ireland and the U.K. It’s thought that the breed was created in the 1800s by breeders who wanted to produce a dog with some of the characteristics of the old-style animals that were used for the sport of bull-baiting. Terrier-type dogs were used in the crossbreed to create a less aggressive, lighter-framed animal.

So, these early designer dogs were taken across to the United States with early immigrants. The dogs were used for hunting, herding, and served as companions too. It’s thought that it’s those early pups who are the ancestors of the modern American Pitbull Terrier. The American Kennel Club doesn’t recognize the pitbull terrier as a separate breed.

However, a Pitbull who has been properly socialized and trained will make as friendly a family pet as any other dog breed. The Pitbull is a muscular dog that stands up to 19 inches at the shoulder, weighing between 40 and 70 pounds. These pups have a characteristic broad head, prominent cheekbones, and a strong jaw. The Pitbull has naturally floppy ears and round eyes that are set wide apart. The breed has a short, shiny coat that comes in a wide variety of colors and patterns.

The Pitbull is often mixed with other breeds that end up in shelters.  Common pitbull mixes include the Pitweiler, the Labrapit or the Mastiff Pitbull mix.

The Corgi is an ancient breed that can be traced back to the 1100s when immigrant Flemish craftsmen arrived in southwestern Wales, U.K. to work for King Henry I. The Corgi was primarily used for herding sheep and cattle, nipping at the animals’ heels to keep them in order.

These are small, sturdy dogs, standing up to 12 inches at the shoulder and weighing up to 30 pounds. The Corgi’s wedge-shaped skull gives the breed a foxy look, which is enhanced by their large, upright ears.

The Corgi has a medium-length double coat with a water-resistant undercoat overlaid with a layer of coarse guard hairs. Corgis can be sable, fawn, red, or black and tan. Most Corgis have white markings, although some don’t.

As you would expect for a herding dog, Pembroke Welsh Corgis are prey-driven, and they can also be very territorial. However, on the upside, these pups are loyal, sociable, and curious, making them great fun to have around. The Corgi can be either Pembroke or Welsh, and they typically have tails that are short or docked.

As we’ve already mentioned, when you take on a mixed breed, there’s no way of telling which parent dog the puppies will most resemble in looks and character With the Pitbull Corgi mix, there’s no historically dominant breed, so it really is pot luck as to how your puppy will turn out as an adult!

The Pitbull Corgi mix is generally an affectionate, playful pup who is everyone’s best friend, as long as he is properly socialized and trained as a puppy. These dogs love to be around their human family, being playful, lovable, and downright silly too! So, as a family pet, the Pitbull Corgi mix is a winner! However, you should know that this hybrid breed can be highly protective of his family and makes a great guard dog.

Despite the American Pitbull Terrier’s somewhat tarnished reputation as an attack dog, the Pitbull Corgi crossbreed generally gets along well with other pets. However, the Corgi’s high prey drive can sometimes be triggered by smaller creatures running around the house, so early training and socialization are essential. The Pitbull Corgi mix is not known as a barker, so your neighbors should have no cause for complaint on that score.

The Pitbull Corgi mix is usually a medium-sized dog that typically stands from around 17 to 19 inches in height, weighing between 30 and 50 pounds. There’s no specific breed standard as far as looks go, but most of these dogs inherit the compact, muscular build of the Pitbull with the slightly sharper features of the Corgi.

The Pitbull Corgi mix generally has a short, stiff coat that’s easy to care for. You’ll just need to brush your dog once a week to keep his coat in nice condition and get rid of dead, loose hair. However, if your puppy inherits the longer, double coat of the Corgi, you’ll need to brush him more frequently.

If you have allergy sufferers in your household, you should know that the Pitbull Corgi mix sheds twice yearly. Coat color varies tremendously, but most Pitbull Corgi mixes have white patches rather than being a solid color throughout.

The Pitbull Corgi mix is quite a lively character who will need a decent amount of exercise. Ideally, you should walk your dog twice a day and include some playtimes too. These pups can become stressed if left alone for long periods. So, if you’re out all day at work, you’ll need to arrange for a dog walker to come in to exercise your pup for you.

The Pitbull Corgi mix will benefit from early socialization and puppy training classes, as these dogs are physically strong, intelligent, and strong-willed. That said, both parent breeds are keen to please, so training usually progresses smoothly. Always use positive reinforcement training methods and praise your dog when he gets it right.  If you plan to crate train, make sure you get a crate that’s suited for a pitbull sized dog.

Pitbulls can have a tendency to be destructive if left alone for long periods. Also, a Pitbull that’s left shut out in your backyard may dig, partly to relieve boredom and partly to make an escape attempt! However, you can train your Pitbull Corgi mix out of these habits through patient, persistent education. The Pitbull Corgi mix is a bright, clever breed that may enjoy taking part in a variety of doggy sports, including obedience tracking and agility training.

The Pitbull Corgi mix requires high-quality food that’s appropriate to his age and the amount of exercise he undertakes. Both parent breeds can become overweight if they are not fed correctly. For that reason, you must always feed your dog according to the manufacturer’s guidelines on the food packaging or as per your veterinary surgeon’s directions.

Although you can use treats as a positive reward when training your dog, keep a watchful eye on how much weight your pup gains, and cut down the number of treats he receives if necessary. In general, a Pitbull Corgi mix requires around three cups of dry dog food each day.

The Pitbull Corgi mix is not known as a hypoallergenic breed of dog. These double-coated pups shed continually year-round with two major shedding periods during the spring and fall when the coat is “blown.”

You’ll need to spend time brushing your dog at least once or twice a week, using a pin or slicker brush. During heavy shedding periods, you’ll need to groom your dog every day to prevent your carpets from becoming covered with hair! As a general rule, a Pitbull Corgi doesn’t do well if bathed too often. These pups can develop skin sensitivity to shampoo and conditioning products if they are bathed over-frequently.

The current cost of a Pitbull Corgi mix is between $1,000 and $1,500. The price you pay will vary, depending on whereabouts in the country the breeder is located, the show record of the puppy’s parents, and the sex of your chosen pup.

Be sure to visit the breeder’s premises to view the puppy’s parents and siblings. That will give you a good idea of the offspring’s character, looks, and temperament. You can often gauge how big the puppy will grow to be. Always ask to see the puppy’s parents’ health screening certificates before you make a final decision to take the pup home.

The Pitbull Corgi mix is not an especially common mixed breed, but you can find a few breeders around the country. It’s worth asking around local dog clubs and putting the word out on social media to see if any Pitbull or Corgi fans can put you in touch with kennels who produce this unusual designer breed.

Not everyone enjoys the challenge of raising and training a puppy. If you would prefer to take on an adult Pitbull Corgi mix, you might want to consider offering a home to a dog from a rescue center or shelter. It’s important to remember that not all dogs that you find in rescue centers come with a history. Although most rescues do take the time to assess all their dogs for temperament, trainability, and reaction to other pets, you can never be completely sure of what you’ll get.

Some rescue dogs come from backgrounds where they have been mistreated. Others may have never been housetrained. For that reason, it’s a good idea to look for a shelter that offers you the chance to take a dog home on a trial basis for a couple of weeks. That gives you the opportunity to see if the dog is a good fit for your family, home environment, and usual routine. If you and the dog are not compatible, you can return the pup after the trial period ends.

If you’re looking for a loving family pet that’s loyal, fun, and slightly comical too, the Pitbull Corgi mix could be the dog of your dreams! The Corgi Pit will be a good fit size-wise if you have an apartment. These dogs are not known as barkers, so you should have no problem with noise annoyance if you have near neighbors.

Pitbull Corgi mixes generally get on very well with other pets, although if your dog takes mostly after his Corgi ancestors, you may find he has a tendency to herd other family members. However, that behavior can be modified through training.

If you have allergy sufferers in your home, you should be aware that the Pitbull Corgi mix does have a tendency to shed. Twice a year, this double-coated dog blows his coat. That means extra grooming duties for you and misery for a pet allergy sufferer!

Now you have all the information you’ll need to be able to make a decision on whether the Pitbull Corgi mix breed would make the ideal canine companion for your family. Have fun, and good luck in your search for the perfect pet!