White German Shepherds are rare, and very sought after. In this article below, we cover the white coat controversy, genetics, puppy costs, and more! 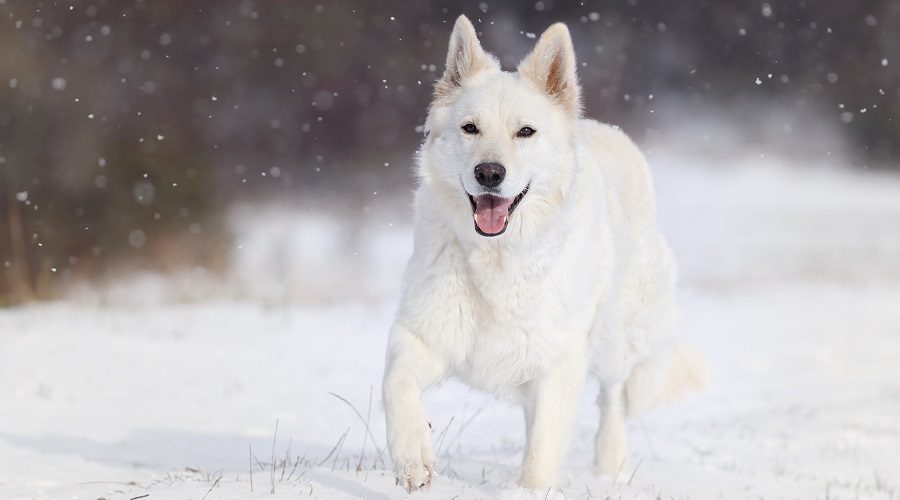 Their white coats are one of the rarer colors, and as such is seen to be somewhat of a collector’s canine! Despite being considered a fault by some of the world’s leading kennel clubs, he is still very much sought after. Regardless of his color or name, White German Shepherds make great family pets. The breed is gentle, protective and sweet. Their appearance is striking, and you’ll be assured to get looks every time you are at the dog park. Let’s dive deeper and explore their history, controversies and more.

His grandfather, called Greif, was a white Thuringian Shepherd. It is from Greif that the white gene originates. Since then white German Shepherds have appeared in litters. They come sporadically via gene carriers or are bred purposefully. Ever since, scientists and fanciers alike have sought to understand both the genetics and the dog himself.

Since 1933, most notably during the World Wars, the Nazi state tarred the white German Shepherds reputation. They mistook him for an albino dog. He was thereafter labeled as being a carrier of faulty genetics. It was even falsely claimed that he was the causation of all illnesses. As a result, there was a push to eliminate them from the gene pool. Despite this claim having no scientific basis, white German Shepherds are still unable to complete in many conformation shows. The breed is still frowned upon by many breeders.

Since the German Shepherd establishment in 1895, white fanciers have purposefully bred and refined the breed in order to protect them from being eliminated entirely. While white German Shepherds were originally just a naturally occurring color variation, in certain circles he is now also considered to be a separate breed in his own right. There is still much debate within the community surrounding this. There are those in favor of White Shepherds, who simply call them but the same name. And then there are classic breeders who still prefer to call them White German Shepherds.

The United Kennel Club (UKC) in America were the first to recognize White Shepherds as a breed in his own right in 1999. Ever since then, White Shepherds have been gaining popularity. The American Kennel Club (AKC) has stated that the German Shepherd, who is currently the 2nd most popular dog in America, is the only label that is going to cover the white-colored pup. Because the AKC does not recognize them as a separate breed, it is difficult to ascertain how popular this color of pup actually is.

The recessive gene is likened to an ‘on and off’ switch, in that if both the parents are white, it will act as an off switch to all other color possibilities, and the entire litter will be white. It is also true that if two non-white dogs’ produce a litter, they too could have a small number of white pup’s, but only if they both carry the gene.

A common misconception is that white German Shepherds are albino. An albino dog is a consequence of a genetic defect. This results in colorless hair and pale features, such as pink eyes and very pale skin. Albino Shepherds do exist, as they do in every dog breed. However this breed is simply white, and he most commonly has dark eyes and black features.

His coloration is not indicative of health issues. In many breeds pigmentation related health issues, such as deafness, can be common; this can occur in breeds such as the Dogo Argentino or the English Bull Terrier. The white German Shepherd is simply a color and has no correlation with any other health characteristic or breed detriment.  It’s similar with the long coat German Shepherd.

Registration of the White GSD

Many dog owners across the world like to enlist their pooch with kennel clubs for several reasons. Benefits could include gaining official certificates, eligibility to take part in competitions, and local events. It’s also beneficial for achieving recognition titles such as a therapy dog, or search and rescue dog status. If registering your white German Shepherd is important to you then there are 2 ways in which you can do this.

Firstly, you can register him with the AKC as a German Shepherd. You’ll register as a purebred German Shepherd that happens to be of the white color. It is important to remember that the AKC still considers the color to be a fault. You’ll be disqualified from competing in conformation shows. However, he is still eligible to compete in performance-related events such as herding and obedience. Be aware though that German Shepherd fanciers prefer the traditional or darker colors of the breed. As such, it’s claimed that the white German Shepherds would likely be discriminated against in performance tasks.

Alternatively, you can register him with the UKC as White Shepherds. The UKC recognizes White Shepherds as a breed in their own right. As a result of this, they allow him to compete in conformation shows unimpeded. They can compete in any other event linked to this classification. However, in order to be registered as such, you must be able to prove that he is of third-generation.

It is a personal opinion as to which kennel club you choose to register your pup with. Many people view the AKC as the traditional and superior kennel club. However, in regard to the white German Shepherd, dependent on your reasoning for joining a kennel club, there are clearly limitations to joining the AKC. If showing your dog for conformation purposes is an important factor for you, then if you can, you should register him with the UKC. Or if you prefer the kudos that comes with the AKC then you should consider getting a darker colored German Shepherd.

White German Shepherds have a double coat with the under coat being dense and fine in texture, and the outer coat being thick and straight. This double coat keeps him warm and protected from the elements. Pure white is the preferred color, however, cream through to light biscuit is accepted. His skin should be grey, and whilst pink is accepted, it should not be as a result of albinism. All of his features such as the nose, lips, eye rims and pads are to be black in color.

Because of his fluffy white coat, he is often mistaken for the rarer Berger Blanc Suisse.  The berger actually looks like a white belgian malinois which also looks like a German Shepherd in some ways. This guy is a relatively new breed, and again, he is not recognized by the AKC, but he is by the Federation Cynologique Internationale, which is a Europe based kennel club. They are believed to share the same ancestors and they almost look identical! Parallels have also been drawn with the white Siberian Husky and the German Shepherd Husky mix, the Gerberian Shepsky.

Something to note before we jump into discussing their temperament.  Shepherds can be trained to do whatever the owner wishes.  German Shepherds in general are fantastic dogs for everything from police work, to companionship.  It’s essential that they are trained properly for them to realize their full potential.

It’s also worth noting that our overview below is our opinion based on research that we’ve done, but it’s important to note that temperaments change from dog to dog.  We can make generalizations, but there will always be differences in each breed as well as each color variant.

For this reason, the white German Shepherd has a very subtle difference in temperament compared to the standard German Shepherd breed. Because he’s been refined to be used more as a companionship dog than a guard dog, some of those stronger tendencies have been lost along the way. This is not to say that he would make a useless guard dog, however. But he’d be less of a natural compared to a traditional colored pup. As a result, the white German Shepherd is said to be slightly more sociable and calmer. They are also considered slightly less intense.

As long as he is socialized properly as a pup, he can make a great family pet. The white German Shepherd is known to be very affectionate with their immediate family. He’s also friendly with those who are welcomed into the pack by his master. He adores playing or cuddling with any pack member that will give him attention. Not only this, but he is gentle with small children and other household pets and is known to be adaptable if another animal is brought into the pack.

The German Shepherd Dog is a headstrong pup, so if you plan to crate train or train with a harness, make sure you have the appropriately sized harness for a German Shepherd and the right sized German Shepherd dog crate to make training easier on you and your dog in the long term.

As stated previously, it is commonly misunderstood that all white dogs have increased health issues, and this is definitely not the case with the white German Shepherd. He is considered to be a generally healthy dog, and his lifespan is, on average, 7 – 10 years.

German Shepherds commonly suffer with Elbow and Hip Dysplasia. This is an abnormal formation of the elbow and hip joint, which overtime can lead to severe pain in the joints, and it can lead to crippling arthritis. White coated Shepherds are no different. Generally, this is a disease that develops in older age in many dogs. The White Shepherd Genetics’ Project have thoroughly studied the specific lineage, and it would appear that there are no major health concerns other than Elbow and Hip Dysplasia.

The cost of German Shepherd puppy is, on average, between $1,000 and $1,500. Generally, you can expect to pay towards the higher end of the scale for White German Shepherd puppies as they are rarer. These uniquely colored pups cost upwards of $1000.  This is relatively cheap for a purebred dog, however, this is down to this specific bloodline being relatively new.

Despite the controversy, if you are considering getting one of these white fluffy pups, you have the choice between a traditional German Shepherd breeder who may focus solely on the color white, or you can source your pup from a German Shepherd specific lineage enthusiast.

The best way to ensure the health of your pup is to buy him from a reputable breeder. Regardless of their allegiance to the classic White German Shepherd, or specific lineage view of the White Shepherd, a good breeder will always introduce and show you to the parents, as well as provide you with health certificates.

If the specific shepherd lineage has piqued your interest then the American White Shepherd Association lists reputable breeders by state and should be your first port of call when looking into finding a pup of your own.

Q: Are White German Shepherds good family dogs?
A: They are wonderful family dogs as long as they are raised correctly and socialized properly from a young age.  As with any dog breed, it’s important to socialize them early with other pets and kids if you have them.  Once integrated with the family, they make great pets and will attach to the “family pack.”

No matter where you fall within the controversy of the white German Shepherd, one thing is for sure, he is one majestic looking creature. With the appearance of a snowy looking wolf hybrid coupled with one of the world’s most favored canine personalities, he is a doggy dream that no one can deny!

We have “Prince”, he is a white German Shepard puppy, we are enjoying him as part of the family. Thank you for this information, it was very helpful.

You are very welcome Mak! Good luck with your puppy!

The Rottweiler vs. The German Shepherd: Breed Comparison & Differences