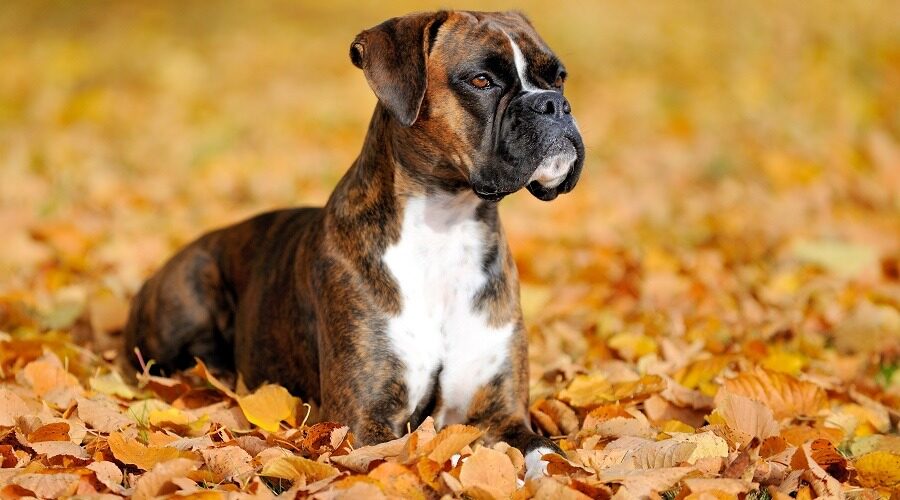 The cheerful, boisterous boxer ranks at number 10 of 193 on the American Kennel Club’s breed popularity chart, making him one of America’s favorite pets.

A well-bred, well-socialized boxer gets on well with everyone, including kids and other pets. Although they are pretty trainable,they can have a stubborn streak, but that’s generally viewed with amusement by their owners. After all, how could you not love this pup’s wrinkled, permanently worried look and unstinting devotion?

This breed sits within the AKC’s “working group” of breeds. These dogs are very active and lively, needing lots of exercise and excelling in activities such as agility and flyball.  These pups are molosser breeds, and share similar traits to other bully breeds like the pitbull terrier.

In this article, we take a closer look at the breed. Here, you’ll learn all about the origins, personality, and the potential health problems that can sometimes affect this breed. When you’ve finished reading, you’ll know whether a boxer would make the ideal canine companion for you and your family!

The boxer comes from Germany and was developed as a working dog in the late 19th century.

Early boxers are thought to belong to the same family as bulldogs and bull terriers. It’s also likely that huge, mastiff-type dogs known as “bullenbeissers” were the ancestors of the boxer. Bullenbeisser comes from the German word, meaning “bull biter.” These dogs were employed on large estates for bringing down large game animals. Later, the bullenbeisser found a place as a livestock herder and guardian.

The smaller, lighter weight dog that we know today appeared in the 1880s. These versatile pups were used as police dogs, guide dogs, and served in the German military during World War I as scouts and messengers.

Primarily due to anti-German feelings following the two World Wars, it wasn’t until the 1950s that the boxer began to enjoy popularity as a family pet.

Although they can be used as seeing-eye dogs, their primary role today is as a family pet and guardian.

Boxers are prone to a few health problems, including genetic issues such as arrhythmogenic right ventricular cardiomyopathy, a severe congenital heart disease that is usually fatal. Other inherited health problems that affect boxers include:

Responsible breeders will have all their breeding dogs screened by an appropriately qualified vet for these genetic abnormalities. In theory, puppies bred from parents who are free from genetic diseases should be healthy. For this reason, you should always ask to see the veterinary screening certificates for both a puppy’s parents and grandparents before you buy a boxer puppy from a breeder.

Other non-hereditary health conditions that tend to affect them include:

Boxers are classed as brachycephalic dogs. Their flat face and deeply-wrinkled snout can lead to breathing problems for these pups, especially during hot weather.

They don’t have an exceptionally long life expectancy, usually living for eight to ten years.

This breed is well-known for their boundless energy and boisterous temperament. These dogs need a lot of exercise, every day!

Your boxer won’t be satisfied with a quick walk around the block. He will require at least two long walks every day and as much playtime as you can fit into your day! Ideally, you’ll have a house with a large back garden where your pup can play and burn off his seemingly endless energy.

Boxers are quite intelligent and can be trained. Like the Rottweiler and other stubborn breeds, you will need to be patient and prepared to persevere with training, as they can be a tad stubborn!

It’s essential that you take your boxer puppy to obedience training classes as soon as he is old enough. Early training and education will ensure that your bouncy boxer can be kept in line when he’s fully grown; at least for most of the time! If you plan to harness train your boxer, you should ensure you find a harness specifically made for the Boxer breed, because they love to pull!

Boxers are medium-sized to large dogs, males typically growing to be bigger than females. An adult can weigh from 48.5 pounds to almost 80 pounds, standing from 22 inches to 24.5 inches tall at the shoulder.

They are very family oriented dogs and won’t take kindly to being put outside alone.

Also, exposure to outside temperatures for prolonged periods is not healthy for a boxer. That’s because a their body does not tolerate extremes of heat and cold well. In hot weather, a boxer kept outside is vulnerable to heatstroke, breathing problems, and dehydration. Boxers have relatively thin, short coats and are not built to handle exposure to very cold weather.

In winter, it’s advisable to provide a warm coat or fleece for your boxer to keep him warm when the temperature falls below freezing.

Boxers do not typically have any specific food requirements. However, these are high-energy pups that will quickly burn off calories if they are given sufficient exercise.

Always feed your Boxer high-quality food as typically will be recommended by your vet.  You’ll want to give your dog the daily ration that’s indicated for his weight and age in the manufacturer’s guidelines on the product packaging.

Dry dog food (kibble) is the best choice of food for your boxer, as the biscuits help to remove bacteria from the dog’s teeth as he eats, helping to prevent the formation of plaque and tartar that could cause gingivitis or canine periodontal disease.

Boxers are inclined to be scavengers, so be sure to keep trash cans well out of reach of your dog, and don’t leave your meal unattended and within range of your pup!

Boxers come in shades of bridle, tan, and white.

Unlike some breeds, the boxer’s white coloring is not caused by a genetic mutation. However, as is the case with most white animals, white boxers are more likely to be deaf than tan or brindle animals. Also, you’ll need to take care that your white boxer doesn’t suffer from sunburn that could ultimately lead to him developing skin cancer.

They have a short, smooth coat and is a moderate shedder.

The boxer is an easy maintenance dog, as far as grooming is concerned. And that’s just as well, considering how much time you’ll need to spend exercising your pet!

The boxer’s short, smooth coat just needs brushing once a week with a firm bristle brush to keep it shiny and healthy and to get rid of any dead hair.

You won’t need to bathe your boxer too often unless he rolls in something especially disgusting! Remember to bathe your dog with only a mild, dog-specific shampoo that won’t dry his skin or trigger an allergy.

Trim your dog’s nails every couple of weeks to keep them tidy. If you don’t fancy taking on this task yourself, ask your local dog groomer or vet clinic to do the job for you.

So, would a boxer be the right canine companion for you and your family?

So, does a boxer sound like the kind of dog you would love to have as your family’s furry friend for up to ten years?

The key to finding the right puppy is to go to a reputable, licensed breeder who abides by the American Boxer Club’s Code of Ethics.

A decent breeder will have had a vet carry out all the necessary screening of the puppy’s parents to make sure that they don’t have any genetic defects that could be passed onto their offspring. The breeder should be happy to show you written documentation, confirming that both the puppy’s parents have been examined and cleared by the appropriate health organizations.

You can find a list of reputable boxer breeders on the American Kennel Club website at this link.

The price you’ll pay for a boxer puppy can vary widely, depending on his place of origin, the sex of the pup, whether his parents are prize-winning show animals, etc. The current price for boxer puppies varies from around $750 to $1,500.  Expect lots of costs to add up during year one.

Recently, there has been much well-deserved bad press about so-called puppy mills.

Many people buy puppies from puppy mills because their price is low, without realizing that the breeding dogs that are used to produce the puppies are frequently poorly cared for and are kept in unsanitary, miserable conditions. Often the puppies are sickly and unvaccinated, and many succumb to illness or death within a week or so of arriving in their new home.

Puppy mills are purely commercial enterprises that are set up to make a lot of money very quickly. Also, many of these places disappear overnight, leaving owners with no comeback if they buy a puppy that subsequently dies or turns out to have inherited health problems.

The moral of this story is that you should only buy a boxer puppy from a reputable breeder, preferably one who is recommended by a vet. If the breeder is unwilling to introduce you to the puppy’s parents or siblings and won’t show you around his kennels, walk away.

Puppies are undoubtedly great fun, but they’re also a lot of work! So, it may be that an adult boxer is better suited to your needs and lifestyle than a puppy.

There are dozens of shelters across the U.S. where you could find an adult boxer that would be perfect for you. Some rescue centers also have boxer puppies, although their parentage can be uncertain.

If you adopt a boxer from a shelter, always have your vet check the dog or puppy over for any health problems. Most rescue organizations will test their dogs for temperament and suitability before agreeing to a re-homing.

Also, many shelters now operate a kind of “try before you buy” scheme, where you can take a dog home for a trial period before committing to a permanent arrangement.

At this link, you’ll find lots of boxer shelters and rescue organizations across the U.S.

There are many different Boxer mixes that have come out in recent years, especially with the “designer dog” craze that’s hit the United States and other countries.  Some of the most popular boxer mixes include:

If you have plenty of space, a large backyard, and you’re an outdoorsy family that lives an active lifestyle, a boxer could be the ideal dog for you.

The trainable boxer will thrive in a family environment, especially if your family is keen to take your dog to agility and flyball events that your energetic pup will love! You’ll need to be prepared to spend a lot of time exercising your boxer, although his grooming requirements are minimal.

Boxers are prone to several inherited health conditions. So, if you decide to buy a boxer puppy, always use a licensed breeder, and ask to see the health screening certificates for your pup’s parents and grandparents. Avoid purchasing a boxer puppy from a puppy mill where the dogs are kept in poor conditions and the puppies are often diseased and sickly.

If you would prefer to take on an adult boxer, you might find your ideal companion at a rescue center or shelter. Right across America, there are dozens of homeless boxers who would love the chance of settling down in a loving, forever home.

Best Family Dogs: 15 Breeds For Any Household With Kids