Trying to decide if the Boxer or the American Pitbull Terrier makes a better canine companion for your family? These dogs are similar in some ways but are different in others. Read on and find out which is the perfect pup to welcome into your home! 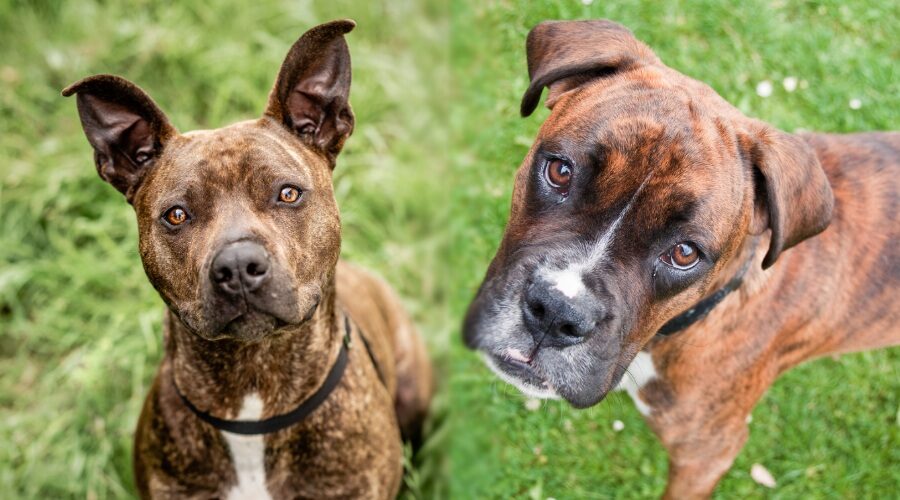 The Boxer and the American Pitbull Terrier might look different, but they are quite similar in their temperament. They are energetic bundles of fun that will keep you and your family entertained for hours on end. They both require a significant amount of exercise, and a firm pack leader.

The Boxer is, however, known to suffer more health issues compared to the Pitbull, but the Boxer does not have a ‘ferocious’ reputation to contend with, unlike the Pitbull. They both make for great family companions, and they both have a lot of love to give. During this article, the American Pitbull Terrier will be referred to as the Pitbull.

Both breeds can make good family dogs if they are trained properly, and these two breeds are often mixed together to create a popular “designer dog.”

The American Pitbull Terrier and the Boxer have differing histories, but they were both originally bred as hunting dogs; the Boxer hunted large game animals, whereas the Pitbull’s forefathers were used to hunt vermin. Over time, the Pitbull was developed into a fighting dog, and this is why the Pitbull has a vicious, but very unfair, reputation, whereas the Boxer is not associated with being anywhere near as aggressive as the Pitbull.

The Boxer is believed to date back to the late 19th Century Germany, who was bred down from a larger, but now extinct breed, known as the ‘Bullenbeisser,’ which translates to ‘Bull biter.’ The Bullenbeisser was a much larger dog who was used to hunt bull and wild boar. He was powerful and a great guard dog.

Over time, the Germans wanted a more slender and agile dog who could also be welcomed into the family home as a canine companion. Breeding the Bullenbeisser with other undocumented dogs the Boxer was created.

He was named Boxer due to the way in which he uses his front limbs to defend himself in a fight and play, very much like a boxer does!

The Boxer is an intelligent and loyal pup, who is affectionate and bears the title of the family clown! The Boxer currently ranks as the American’s 11th most popular dog breed according to the American Kennel Club (AKC).

In 19th Century England, such dogs were used as fighting dogs, but when this cruel bloodsport was outlawed in 1835, immigrants took their dogfighting pups to America, where they continued the sport for a short time. In that time, the biggest and most powerful dogs were bred, and this was where the American Pitbull Terrier was born.

During fights, he was trained to only fight other dogs, but when their master entered the ring to stop the fight the dogs would not turn on their master. When this blood sport was outlawed in America, this respect for humans was realized, and they were then bred to be family companionship dogs.

The Pitbull and the Boxer are dissimilar in their appearance and it is quite easy to tell the difference between the two breeds. The Pitbull is the smaller of the two breeds. The male Pitbull will measure 18 to 21 inches in height, measured at paw to shoulder, whereas the male Boxer will measure 23 to 25 inches. Similarly, the male Pitbull weighs 35 to 65 pounds, whereas the male Boxer will weigh a much larger 65 to 80 pounds.

Despite being the larger of the two breeds, they have similar-shaped bodies. They are both in proportion, with long legs that carry a thick and square-shaped body. They have a deep barreled chest and a skinny waist, and a long tail that is held high.

It is their face that is the most distinguishable feature between the two breeds. The Pitbull has a squarer face, with a longer muzzle, and is more proportionate. He is also known for his wide smile, similar to that of Alice in Wonderland’s Cheshire Cat!

The Boxer’s face is rounder in appearance, and his lower jaw is much longer than his upper jaw, which gives him his unique face shape. For this reason, he is a Brachycephalic canine, and whilst many people like this ‘baby-faced’ look along with his large round eyes, it, unfortunately, comes with respiratory health problems.

The Pitbull and the Boxer are surprisingly quite similar in their temperament. They both make great family pets. They are both incredibly sociable dogs who must be involved in every family event, whether that be mucking around in the garden, snuggling on the sofa, or cooking a family meal in the kitchen. They are extremely energetic and very bouncy and could easily spend all day having fun in the garden.

Despite the Pitbull’s reputation of being vicious, he is nicknamed the ‘nanny dog,’ and this is because of his affinity for children. Because of their size and energy, many people say that they are both only suited to a family with older children, however, many owners say that as long as they supervise and teach their children how to behave around them, then they make the best family pets!

The biggest, and maybe the only, difference is that the Boxer is known to be slightly more aloof with strangers, and while they will quickly accept them into the estate, they will be suspicious and will bark at strangers until his master welcomes them.

The Pitbull, despite his unfriendly and ferocious reputation, would welcome anyone into the estate with open arms and will be the first to make friends with them. For this reason, if you are after a guard dog, then the Boxer will be the better choice. However, neither of the pups extend their sociability to unknown animals, and they will chase them due to their higher prey drive.

They both need intense exercise and as such, when they are not being exercised outside of the home, they will need stimulation in the garden with interactive games or treat-filled puzzle toys.

Because both breeds have strong jaws, make sure you are also looking at durable toys that can take a beating.  For this reason, neither the Pitbull nor the Boxer makes a great apartment dog.

As with any dog, both the Pitbull and the Boxer need early socialization with other pups of all shapes and sizes to ensure that they are well behaved around other canines.

While neither of these breeds is particularly dominant, they do still need a pack leader that is firm and consistent in his training.

The Pitbull and the Boxer both have different health problems that their breed is prone to.

The Pitbull is prone to:

The Boxer is prone to quite a few health issues, more than the average dog and considerably more than the Pitbull, and this is something to consider if you are thinking about welcoming one of these gorgeous dogs into your home. They are prone to suffering from deafness and have higher cancer rates than most dogs. It is recommended by the Boxer National Breed Club that his parents are tested for the following issues:

In addition to the above-listed concerns, the Boxer is also a Brachycephalic canine, and as such, any prospective owner should research exactly what this is and what this means for your pup. Generally, his flat face causes several respiratory issues, as well as causing problems with heat regulation.

Both the Pitbull and the Boxer require 2 ½ cups of food every day. Of course, if they are sedentary, or more active, then they may need slightly less or more. Pitbulls will do well on a sports formula dog food for active breeds, whereas Boxers will do well on a variety of food formulas.

Both the Pitbull and the Boxer are similar in their grooming needs, and they are both very easy to care for. A brush once a week will keep their short and shiny coats looking healthy. Neither breed are heavy shedders, but you should still expect some dog hairs in your house.

They will only require a bath as and when they need it, once every two months will be adequate, as long as they aren’t a mud or muck lover!

The cost of either breed, from a reputable breeder, will start at around $800. However, the Boxer can go up much more in price as he is more sought after and there are fewer of him available in rehoming centers compared to the Pitbull.

If you are thinking about adopting one of these guys then the website, Pitbull Rescue Central, has a database where you can search for Pitbull’s state by state. Whilst Boxers are much less common than the Pitbull, the American Boxer Club also lists dedicated Boxer rescue centers by state.

Overall, both the Boxer and the Pitbull are awesome dogs who are both great family pets. They are both sociable and affectionate with their immediate family, with the Boxer being slightly more aloof with strangers, although he is quick to accept them. The Boxer makes for a better guard dog, whereas the Pitbull does not. They both need a lot of exercise and mental stimulation; they would suit an active family, and neither of them would cope well in a sedentary environment.

So, whether you prefer the look of the Boxer with his baby Brachycephalic face, or the wide-smiled Pitbull, either way, you and your entire family will have many happy years and memories to enjoy!

While all the bully dogs are 1st cousins , they all have some similar tendencies. Boxers and pit bulls ... wow.. the two best dogs on the planet. Steak and ice cream. Dog lover dogs. The better you are to them, then the better they are to you.
Animal aggression can be an issue with both these breeds. Take that seriously because these are also the two toughest dogs on the planet : assuming a good blood line. Unfortunately the Boxer breeders have a tendency to turn out poorly breed animals which are too high on leg for good dog fighting; not that one would encourage dog fighting but Boxers start fights. Get you a short, stout boxer and you probably have a good one.
Equally disturbing is the number of poorly bred pit bulls, often mixed with other breeds, and who knows what those breeds might be. Health problems, animal aggression and the rare but real tendencies for some pit bulls to attack people or children unprovoked.. Find a reputable breeder for your pit bull !

Pitt Bull Terrier mix: We just adopted this two year old pup. And we love him as much as he seems to love us! He learned in the first week to stay home and we have acrage and a large porch. House guests last weekend didn't phase Butch anymore than our 60 year old visiting daughters, He has also adjusted to our 10 year old toy poddle. Last night the slept together... I guess what I'm saying is there are some bad ones out there but no more then the ones like ours. Darned! I just got another sloppy kiss!

Hello!
Pitbull's are wonderful dogs!!
I have Boxers for almost 33 years and I love Pitbull's too!!
Both breeds are adorable :o)
Best regards from The Netherlands!!
Edith Schulting :o)