Mixed breeds are becoming increasingly popular. More and more people are deciding to rescue their pets from shelters instead of purchasing them from a breeder. Many people are also deciding to purchase mixed breeds like the Boxador from breeders that specifically breed mixes due to their characteristics and appearances.

The Boxador is one of these mixed breeds. Bred from a Boxer and Lab, this mixed breed has the characteristics of each. However, this breed is unique in its own right and has many standout traits that make it unique.

Because this is a mixed breed, the traits each particular Boxador inherits is a flip of the coin. Some Boxador look like Labs, while others look like Boxers. We will try to cover all possible trait combinations in this guide. But, remember, each Boxador is unique.

The Boxador can vary in appearance quite a bit. They can look like a Boxer or like Lab, depending on the exact traits they inherit.

Let’s look at each parent breed in turn so we can get an idea of what a Boxador might look like.

Boxers are medium-sized dogs with short skulls and broad heads. They are brachycephalic, which means their muzzles are very “squished.”

A Boxer is typically described as muscular and well-built. They were originally designed at working and guard dogs, and their appearance represents this.

They have a short back and strong limbs. Their coat is very tight-fitting and short.

Boxers typically come with fawn or brindle coat colors. They usually have a white underbelly and white feet, though this is not always the case.

Labs were also designed to be working dogs. They have a strong, practical build. Built for retrieving game, these dogs are very well built and have strong legs.

These dogs are also medium-sized. Their most distinguishing feature is their dense, weather resistant coat. Because they were designed to retrieve waterfowl in all conditions, their coat does a good job at keeping the outside forces away from their skin.

They also have an “otter” tail, which helps them swim should the game they seek fall into the water. They also have powerful jaws but have a very gentle bite. They were bred to retrieve game without damaging it, and even companion Labs have this skill.

Labs only come in black, yellow, and chocolate.

The Boxador can get traits from either of their parents. They can have a short coat like a Boxer or the longer, denser coat of a Lab. Their coat might have some weather-resistant abilities, though it will likely never be as resistant as a purebred Labrador.

Boxer Lab mixes will likely be medium-sized. However, their exact size can vary quite a bit. They can be anywhere from 50 to 80 pounds. Males are typically larger, but this is not always the case. 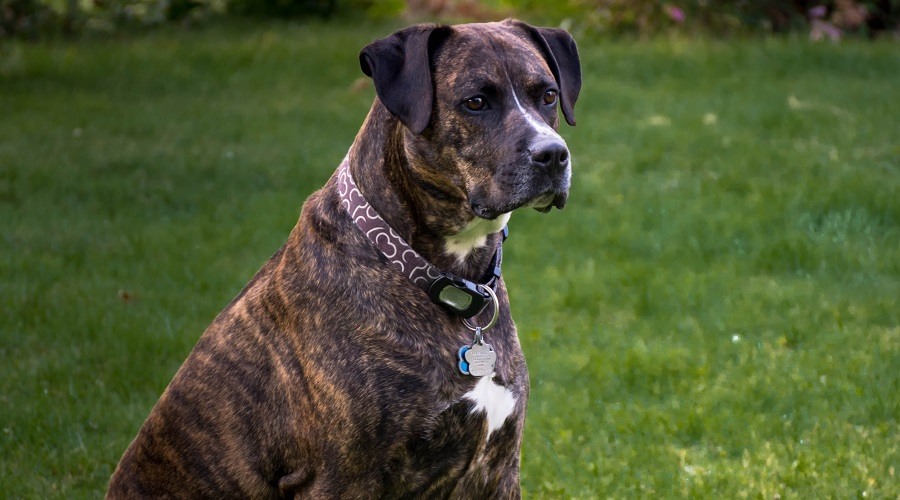 Their height has less of a variance. They are typically between 23 to 25 inches tall at the shoulder. Some dogs do fall out of this range, however.

This mixed breed has a much larger list of coat colors than its parents. It can be bridle or tan like the Boxer or any of the three Lab colors. Most likely, dogs will have a mix of colors and markings from both parents. The parent’s color does have an effect on the color of the puppies. Looking at the parents is the best way to tell what the puppy’s coats will look like.

Usually, this dog has a very broad head. While there are some dogs that have Boxer or Lab head shapes, it is more likely that their head will be a mix of both parent breeds. Their muzzle might be short like the Boxer, or more naturally shaped like the Lab.

Much like the appearance, the Boxador can inherit the personality of either parent breed. In most cases, a mixed breed will have a variety of traits from each parent.

While some portion of temperament is genetic, socialization is a key part of having a well-adjusted, friendly adult dog. It is important that you socialize your dog early and often no matter their genetic predisposition.

The Boxer is typically playful and easygoing. While these dogs were breed with guard tendencies, they are not typically aggressive. Still, they do bond very closely with their family members and can be suspicious of strangers.

However, they are very social dogs, and it does not take much to win them over. They are patient and gentle, especially around children. They are good with most family pets, though they can be wary of new dogs.

Boxers are not typically considered easy to train. They can be quite stubborn.

The Lab’s temperament is famous. These dogs are very loveable and friendly. They are good, mellow companions that get along with almost anyone.

These dogs are prone to separation anxiety, so it is important that they are not left alone for long periods.

These dogs are quite easy to train and adapt well to new commands. They are people-pleasers and just want to make you happy.

A Boxer Lab mix can act as either of his parent breeds. They are usually intelligent, but they can inherit the boxer’s stubbornness as well. Their ease of training varies quite a bit. Some of these dogs are very eager to please, while others take some convincing.

Either way, it is important to start training early and often.

Boxadors are usually playful and energetic. They do well in larger families that have plenty of time to play with them. They also have some difficulties with separation anxiety, so training them to be alone should begin early. They can be quite destructive if left alone for long periods, so it is important to have someone with them until they are properly crate trained.

Boxer Lab mixes should get along with most pets. They do not have very strong prey instincts and therefore, will likely get along with cats. They might be somewhat aloof around dogs, but this can be curbed with proper socialization.

Boxadors are one of the healthier dog breeds out there. Typically, mixed breed dogs are less prone to disease and defects than purebred dogs.

This is due to a phenomenon known as hybrid vigor. Basically, mixed breed dogs are less likely to inherit detrimental traits from their parents. This is because their parents are more genetically different from each other than a purebred dog’s parents would be.

Nearly every purebred line started through inbreeding, which created many of the genetic flaws we see in purebred dogs today. Mixing breeds together reverses this trend and creates healthier puppies.

With that said, the Boxador is prone to a few health problems.

Both the Boxer and Lab are prone to hip and elbow dysplasia. Because this is a genetic condition, the Boxador may have problems.

This is where the elbow or hip bones do not line up properly, which can cause arthritis and joint problems. Sadly, this can happen at an early age, though it can also be developed later.

This condition is not curable. It is lifelong, though not typically life-threatening. Dogs with dysplasia will need pain-killers and other medications throughout their life.

Sometimes surgery is recommended, but there is no clear consensus as to whether this helps or not. Some dogs do have dysplasia that can be somewhat remedied with surgeries, but others likely will not benefit. Some major surgeries include whole sections of bone being removed.

This condition does get worse with age. Some dogs are euthanized later in life due to dysplasia when their mobility and quality of life begin to go downhill.

Bloat is a serious stomach condition that can affect Boxadors.

Bloat is a sudden condition that is not completely understood. Simply put, bloat occurs when a dog’s stomach twists and begins filling with gas. We do not know exactly why this happens, but it is detrimental for dogs either way.

Eventually, the dog’s stomach will fill up with so much gas that it puts pressure on the diaphragm. This causes breathing difficulties. As this condition progresses, the pressure will begin cutting off return blood flow to the heart. Extreme pressure can even cause the tissue to die, which can lead to stomach rupture.

Surgery is the only treatment for bloat, and it must happen quickly to be effective.

How much grooming and overall maintenance a Boxador needs depends largely on what traits they inherit from their parents.

If a particular Boxador has longer fur, they will also likely need more grooming than one with short hair.

Shedding will likely occur seasonally in the fall and spring. When a dog is shedding, they will need to be brushed often. It is usually in the owner’s interest to get their dog groomed at these times, as it will save tons of time on the owner’s part and make the dog more comfortable.

Boxador will need regular maintenance on their teeth and nails, just like every other dog. You will need to trim their nails regularly and brush their teeth at least three times a week. While most dogs don’t like having their teeth brushed, this is vital for their long-term health. There are also various enzymatic toothpastes formulated for dogs that make brushing their teeth extremely easy.

Before adopting a Boxador, be sure that you have basic grooming equipment on hand, including a comb, deshedder, and nail clippers.

Boxadors will have a moderate to high exercise need. They are working dogs, so do not expect them to be couch potatoes.

They will require at least 30 minutes of moderate exercise daily. This can be a fast walk, game of frisbee, or other activity that gets your dog breathing heavy. You might want to cut this exercise period into two sessions – one in the morning and one at night.

These dogs prefer a large, fenced in backyard that they can run in.

Because these dogs are intelligent, they require a decent amount of mental stimulation. Training your dog is the best way to keep their minds worn out, and it provides benefits for you as well. These dogs thrive in obedience classes.

You can also use puzzle toys and simple games like hide-and-seek to tire your dog out. Games are a particularly fun way for younger children to bond with the dog – with adult supervision, of course.

If your Boxador is getting plenty of exercise time but is still acting hyper, it is likely that they just need more mental stimulation.

Boxadors can be good dogs for the right family. They are active and do best in families that are active with them. They also prefer a large yard to run in.

They are good with children and other animals as long as they are socialized. They do not have high prey drives, so cats are not typically a problem.

These dogs can also have trouble with separation anxiety, so it is best if at least one family member is home during the day.