Dominance & Pack Behavior in Dogs: Is Being the Alpha Fact or Myth?

Do our canine companions instinctually have a pack mentality? Is your dog vying with you to be the "alpha" of your household? We'll explore the current views on dominant dog behavior and why this matters when training and interacting with your furry friend. 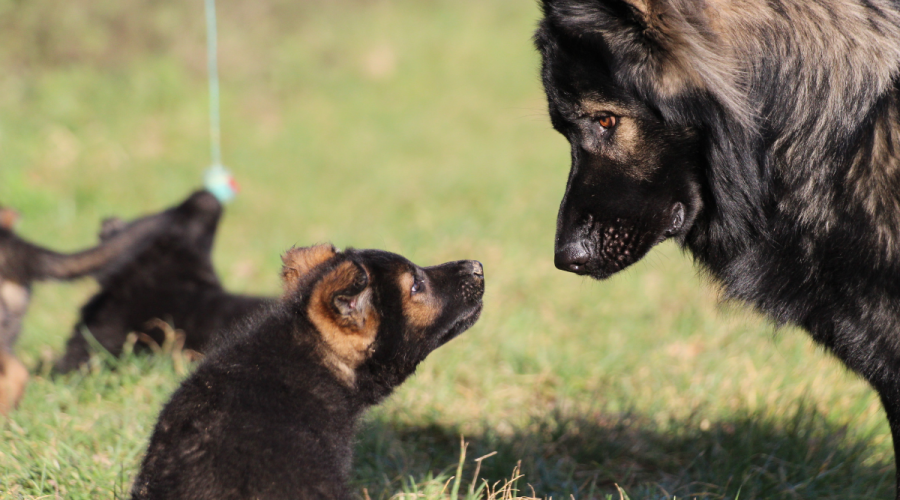 For decades, experts believed that dogs, like their wolf ancestors, adhere to a strict pack hierarchy, headed by an alpha male who dominates his pack members. And this dominance theory was also applied to the relationship between dogs and humans. The idea was that some dogs exhibit dominance over their owners in an attempt to be the alpha of the household.

More recent research, however, has largely debunked these long-held beliefs. Unfortunately, many of these theories continue to persist among some dog owners and even dog trainers despite conflicting evidence. Research has shown that adhering to the alpha dog theory can have detrimental effects on your dog.

How has our understanding of dog behavior evolved over the years? And what’s now considered myth versus fact regarding pack hierarchy (with both dogs and wolves) and “dominant” behavior toward humans? We’ll explore this important subject to help you better understand your dog and the best way to interact with him.

How Has Our Understanding Of Wolf & Dog Pack Behavior Changed?

The idea that dogs follow a pack hierarchy with a dominant alpha leader is rooted in research conducted back in the 1930s and 1940s. Swiss animal behaviorist Rudolph Schenkel observed the behavior of unrelated wolves in captivity and concluded that wolves fight for dominance in a pack, resulting in a clear leader. His study and scholarly literature by other animal behaviorists, most notably David Mech, gave rise to dominance theory and alpha theory, which were applied to wild wolves and eventually to dogs and human-dog relationships.

But after decades of wild wolf pack research, experts, including Mech, have debunked the theory of alpha male. As Mech asserted in his 1999 published study, Alpha Status, Dominance, and Division of Labor in Wolf Packs,

Attempting to apply information about the behavior of assemblages of unrelated captive wolves to the familial structure of natural packs has resulted in considerable confusion. Such an approach is analogous to trying to draw inferences about human family dynamics by studying humans in refugee camps. The concept of the alpha wolf as a ‘top dog’ ruling a group of similar-aged compatriots is particularly misleading.

What We Now Know

We now know that most wild wolf packs consist of a breeding pair and their offspring. There is no single pack leader, and the parents don’t exhibit dominant hierarchy-based behavior toward each other or their offspring. Rather, wolves exhibit natural parent-child behavior, caring for and guiding their offspring. When offspring reach one to three years old, they leave the pack to start their families. They don’t compete for dominance over their existing pack.

It’s also important to point out the general problem of applying wolf behavior to that of domestic dogs. Dogs aren’t wolves, and most don’t live in familial groups or large packs with other dogs. Our canine companions have evolved and live in a very different social construct today.

What About Dog Pack Behavior With Humans?

Many of us grew up believing that humans need to assert their dominance and alpha status over our dogs, assuming that our pups will vie for control over us if we don’t get them in line. But many canine behavioral experts now agree dominant dog pack behavior with humans just doesn’t exist.

Most of the recent research on dog behavior suggests that while dogs exhibit some forms of dominance and submission with other animals, they’re not competing or trying to assert their alpha status with us in our households.

There’s simply no scientific research to support these outdated ideas. Unfortunately, some dog training methods are still based on dominance and alpha theories. Most notable is Cesar Millan, who continues to hold to the alpha dog theory.

Dominance and hierarchy-based training methods presume that dogs are competing with us for alpha status in our home, and therefore, it’s up to us to assert dominant and rigid control over them and force them into submission.

The first problem is that these views have no scientific backing and have been debunked by recent research. But the more troublesome problem is that alpha-based training, typically called aversive-based or negative reinforcement, uses punishment, force, shouting, and sometimes even cruel methods to correct behavior problems.

Several studies have found that averse training methods compromise the well-being of our pet pups, especially when compared to positive reinforcement methods. Effects can include increased anxiety, fear-related aggression, and avoidance. Dogs can also become withdrawn from human family members and reluctant to participate in training.

Many professional organizations, including the American Veterinary Society of Animal Behavior (AVSAB) and the Association of Professional Dog Trainers (APDT), have taken a stand against the use of aversive training based on dominance theory. They urge owners and trainers to avoid techniques that cause physical or emotional discomfort, including:

What Is Positive Reinforcement Training?

While there are various training techniques trainers use, the gist of positive reinforcement training involves teaching your dog that positive behavior will be rewarded with praise, a treat, a toy, etc., and unwanted behaviors won’t get him attention. This approach motivates your dog to want to behave well and removes the owner and dog’s focus on what he’s doing wrong.

Common Myths To Put To Bed

Despite dominance and alpha theories being debunked for years, many old-school beliefs persist about dog dominance in the home. Here are some of the most common myths. All of these are based on the idea that you shouldn’t let your dog assert alpha status.

Today, we have a much better understanding of wolf and dog “pack” behavior than when dominance and alpha theories arose, with science to back it up. The idea that dogs fight with each other or their owners for alpha status based on hierarchical instincts is faulty and firmly fits into the myth category. We urge you to consider using positive reinforcement when training and interacting with your pup and to find a trainer who adheres to these methods.

Hi. Thank you for an interesting read.

Kindly cite the sources upon which these assertions are based.

Thanks for your comment. We did link the studies in each case right in the article, but here they are for your convenience:
https://davemech.org/wolf-research/
https://www.wolf.org/wp-content/uploads/2013/09/267alphastatus_english.pdf
https://www.companionanimalpsychology.com/2017/04/new-literature-review-recommends-reward.html

I’m curious to know what the hierarchal structure is to a dogs perspective in a household. Even with Humans there is a structure from parents to offspring. There has to be some underlining process that keeps a dog from snatching food away, or deciding who to obey.

your info and ideas were debunked a long time ago by experts. please don` t spread misinformation into the dog community

Thanks for the reminder John. We are very overdue for an update to this content and are working to make it now. Thanks!

Interesting read. I had a girl and then a rescue male. They hit it off immediately and he was besotted. So I took him home. Of course, eventually, I decided to allow them to breed. They had six beautiful pups, three survived. Two males and a female. I rehomed the female deciding it would be too much with two females. The two pups I kept, I eventually neutered them which reduced their dominant behavior and marking.

The alpha male and female are still besotted. She is only interested in him when on heat and the boys pre castration were put in their place if they tried to take an interest.

Papa is very submissive with me he lays on the floor when he approaches me head down. Allows me to stroke him and asks permission to come up. His only dominant moments were during grooming due to lack of true but we have worked on that.

The female is the only one in the house so she is an alpha female. Papa is an alpha male. My issue is that the two siblings are jostling for beta male. They seem evenly matched but one is attached to me and always has been, he pesters for attention and if the other one is looking for a cuddle is pushed out by this male. Even toys are hard-fought for.

They grow mostly and posture but nothing more occasional spat not that often and it's not damaging just a lot of growling and trying to be the one on top. The alpha male and female usually break it up and wrestle one each to the ground.

Other than that they play well together. But I wonder if it will ever stop or will they always continue to jostle for position their whole lives? The pups come when called and follow commands when I give them without question so they are only challenging one another. How do I identify the beta male out of the two so I don't cause them to continue to challenge?

Hi Ann, there's a good chance they will always challenge each other. It's especially difficult with dogs that come from the same litter. Sibling rivalry is a thing, and usually in my experience, one of the dogs from the litter comes out a little more "normal" and the other is usually a handful. Ultimately you need to meet the challenge with patience. I'd recommend having a dog trainer come to your home to see their behavior in real-time. Obviously, you can correct the behavior, but those instincts are still going to be there. Working with a professional as it's happening can make a big difference. Good luck with your pups!

They will always jostle and compete for status. The underlings in a pack will often be in charge of different situations too. One may be the dominant one for affection and the other the dominant one for food. The dog you give the most attention to will tend to shift into dominant position. It sounds like you are deferring to Ma and Pa to sort out all the pups squabbles … you need to be the one who does this.
Time out for one minute often helps too.

How Much Does it Cost to Own a Dog? A Yearly & Lifetime Cost Overview

Are You Ready to Own a Dog? Expectations & Responsibilities