The German Shepherd and Great Dane are very different dog breeds, originating from the same part of the world. While they share some similarities in temperament, that's where it stops. Find out what makes them both very different, but great dogs for the right owner. 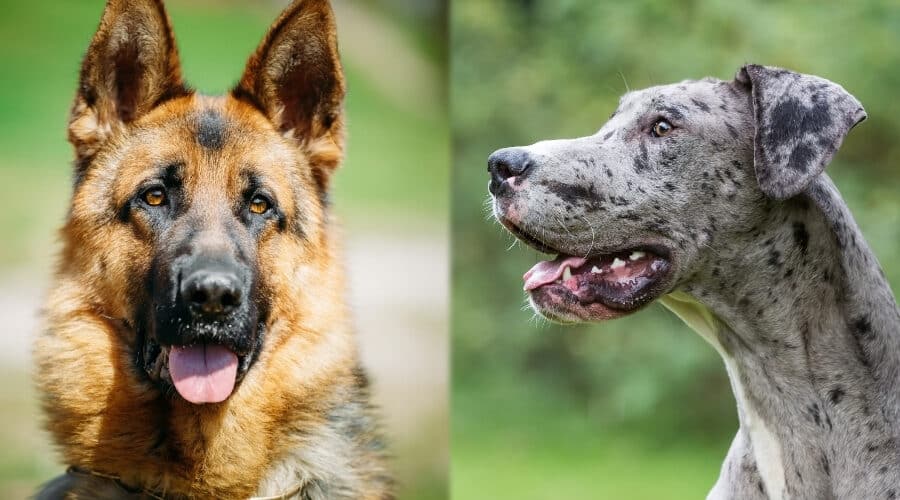 Are you considering the German Shepherd vs. the Great Dane for your next family pup? While these dogs both originate from Germany, they are extremely different dog breeds. While they are more different than they are alike, both breeds do share some similarities.

There is no doubt that the German Shepherd and the Great Dane are very different-looking dogs. But what about their personalities? How are they different or similar? Here we are going to answer all of that and more. From their good looks to their brilliant characters, and their health, training, and exercise needs. We cover everything you’ll need to know before welcoming one into your home.

This breed comparison guide is a must-read for anyone that has narrowed their favorite breeds down to these two German pups. Research is an important part of the dog owner process, and it is important that you prepare yourself for life with either of these two breeds. Because no matter how lovely they are, they are not suited to every family. Let’s jump in!

Looking into the past can help you predict what your soon-to-be dog will be like in the future, i.e., with you. For this reason, his breed history is one of the most important parts of the research process. This is the part that many people neglect, and if they had done so, they might not have chosen that breed at all. So, let’s take a closer look.

The German Shepherd is one of the most recognizable dogs in the world, mainly because he is the most prominent dog breed used in military and police services. And despite his name, not many people know that he was traditionally a herding and farm dog.

He originated from 19th century Germany and was the creation of the best herding dog breeds. When we realized how much of a people dog he was, we began using him for protection services. There are two distinct breeding lines, originating from different countries.

Now, he is the 2nd most popular dog breed in America, but this wasn’t always the case. Like many German things, the World Wars created a lot of anti-German feelings. He was given the name Alsation to remove his German links, and he is still often called this in Europe. Rin-Tin-Tin, the German Shepherd superstar, increased his popularity. So much so, Rin-Tin-Tin received 10,000 letters a week from his fans.

The Great Dane’s history is not as straightforward as the German Shepherd’s, but what we do know is that he is from Germany too. They are one of the largest breeds on the planet, and he is often referred to as the German Mastiff. And it is thought that he has Mastiff, Irish Wolfhound, and Greyhound in his blood. Originally, the Great Dane was larger and more powerful, and they were kept to hunt wild boars for their noble masters.

In the 16th century, German noblemen made them less muscular and more home-friendly. The Germans viewed him as a dog to be admired and dressed in jewels. In Germany, the Great Dane is known as the Kammerhunde, which translates into ‘Chamber Dog.’

Nowadays, he is kept as a companion dog rather than a hunter, but you can be sure that he still has lots of energy and a high prey drive. Because of his size and gentle demeanor, he’s often a popular parent for many crossbreed dogs.

The German Shepherd and the Great Dane are very different looking dogs. The Great Dane is the largest of the two breeds, weighing in at 110 to 175 pounds. He is a giant dog breed and is often compared to other Giant Breed dogs for family companionship.

Size is often the biggest deciding factor for families because the Great Dane needs an extra-large home for sure. Myth busted, the Great Dane is not the tallest in the canine kingdom, the Irish Wolfhound is.

As working and hunting dogs, they both have double coats that help to keep them warm in the winter and cool in the summer months. The Great Dane has a very short and shiny coat. Whereas the German Shepherd has the choice of two coats. One is short and the other is medium to long in length.

The German Shepherd usually sports the traditional black and tan coat color. But he also has other choices, such as solid blue, black, and white. The Great Dane has a wider variety of coat colors, including black, blue, brindle, merle, harlequin (which is spotted), mantle, fawn, and white.

Both breeds have equally similar and different qualities. They are both super affectionate with their families, and they will supply unlimited amounts of slobbery doggy kisses. Be prepared to share your sofa with them. Because if you don’t, they will both make you feel guilty and sulk.

When it comes to strangers, the German Shepherd is much more reserved. He is suspicious of everyone other than his immediate family and will alert you to incoming visitors. Whereas the Dane wants to be everyone’s friend. He is super sociable, and although he might bark loudly, it is more out of excitement. Either way, they both make great watchdogs.

The Great Dane is a big canine clown, and he is goofy, clumsy, and loves to be the center of attention. The German Shepherd, although happy to play with his family, is more sensible. If you like flamboyant dogs, Danes are a fantastic option for you. If you want a calmer pooch in the home, the German Shepherd is the better option.

The German Shepherd is more active than the Great Dane. They need about 60 minutes of daily exercise, which includes walks. Danes require less, due to their larger bodies and their need for additional sleep and rest as they grow. Expect to exercise your Dane for about 30 minutes per day.

They are both very intelligent dogs, meaning that they also need lots of mental stimulation throughout the day on top of their daily exercise. The Great Dane would choose lots of silly playtime, and the German Shepherd would prefer educational training sessions.

Thankfully, once they are physically and mentally stimulated, they are both equally partial to an afternoon snooze too. But, if you don’t meet their needs, they will go a little stir-crazy.

When you cannot entertain them, it’s handy to have plenty of dog toys that withstand heavy chewing so that they can entertain themselves. Danes will likely require slightly bigger toys. Overall, when it comes to their energy and exercise needs, they are well-rounded dogs.

While these two breeds differ in some areas, both are highly are intelligent, they are relatively simple to train. But you do need to teach them. Otherwise, they can turn into obnoxious and unmanageable dogs. Thankfully, you do not need to be an experienced dog owner – just the time and patience.

The key to training them both is positive reinforcement training. The German Shepherd’s motivation will be verbal praise, whereas the Great Dane’s will probably be Scooby snacks. Both breeds will train well when it comes to walking, and the Great Dane can be harness trained with an appropriately sized harness despite, their size.

If we had to choose one dog, we would say that the German Shepherd is the more trainable dog. This is because of his incredibly intense bond with his master and his eagerness to please. This is why he is often chosen for military duties. Although the Great Dane can pick up commands easily, he just wants to have fun.

They both need to be socialized well at a very early age. The German Shepherd can become overly protective if he isn’t taught early on that not everyone is an enemy. And with the Great Dane’s incredible size, you can be sure that if he isn’t well-mannered, he will be an unpleasant handful. Expose them both to as many dogs, humans, sights, and sounds as you can when they are a pup.

These two breeds are both notoriously called “heartbreak breeds” due to their shorter expected lifespan. Which are both 7 to 10 years. This is relatively short compared to the average doggy lifespan, but you can be sure that they will both make the most of their time with you. Despite their short time, they are both relatively healthy dog breeds.

The Great Dane is at risk of various eye conditions, such as entropion, glaucoma, progressive retinal atrophy, and cataracts. He is also at risk of hypothyroidism and autoimmune thyroiditis.

The number one killer of Great Danes is bloat, and it needs immediate veterinary attention. It is important to understand what this is, how to prevent it, and recognize the symptoms. Preventative bloat surgery, called prophylactic gastropexy, is often advised by vets.

The German Shepherd typically consumes three cups of food a day, compared to the Great Dane, who eats around four to six cups a day.  This might be surprising, but Danes have a much slower metabolism than German Shepherds, so he doesn’t need as much energy. He is also more likely to become overweight, so be easy on the Scooby snacks.

Both of these guys should eat a high-quality diet that is designed for large and giant breeds. This is particularly important during puppyhood because it contains the optimum nutrients to control rapid bone growth. Research shows that this can lower the chances of developing bone and joint diseases such as joint dysplasia.

German Shepherds typically perform better on food that’s designed for their activity levels. The same can be said about the majority of recommended Great Dane dog foods. No matter which brand you choose, or what your budget is, typically speaking, the dry kibbles with no artificial ingredients will perform best for both breeds.

The German Shepherd sheds more, and because the Dane’s hair is shorter, it’s less noticeable. But what he lacks in the shedding department he makes up for in doggy drool. If you are opposed to either hair or slobber, this will play a big part in your decision-making process. They will both need bathing once every 8 to 12 weeks to keep them smelling their best.

When it comes to finding a breeder, always do your research and work with one that has plenty of experience. Neither of these guys has a long lifespan, and purchasing a puppy from a puppy mill will only decrease his years. Unreputable breeders always put profit before puppy health, so please do not be convinced by their lower prices.

These two German beauties are both delightful dogs. They look incredibly different from one another, and their sizes will have a huge impact on your decision-making process. They are both loving and affectionate with their family, but this is about as far as it goes when it comes to personality similarities.

The Great Dane is a larger-than-life goofball who is super friendly with everyone. The German Shepherd is a more focused pup who takes his role as a family protector very seriously. Ultimately, they both make brilliant family dogs. You just need to decide which one is better suited to you and your family.