Comparing the American German Shepherd vs. European German Shepherd before you adopt one of the two? Both lines are of the same breed but come with their own unique differences. Find out what's different and what's similar between them! 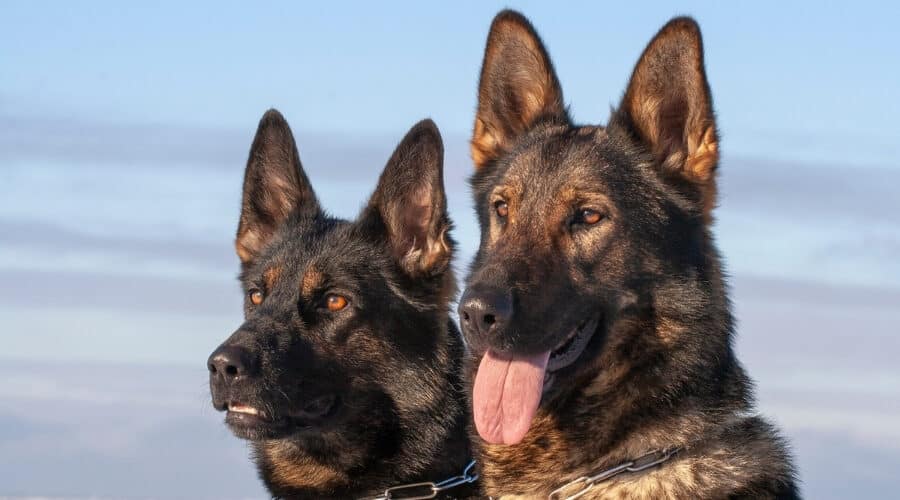 We want to be clear that these dogs are of the same breed. Much like the American vs. English version of the Labrador, all dogs that grow up and are bred from different stock can carry different traits. With that being said, not all breeders agree on the breed differences between localities, and our evaluation here is based on our research and experience. Every dog is different, and every dog can have a different temperament, depending on their parents.

Although the differences between the European and American German Shepherds are subtle, some of them might just sway you to choose one over the other. It might be their size, their work ethic, their health, or their price that might convince you either way. And, here in this guide, we are going to take you through their differences and similarities. So, let’s get straight down to the similarities and differences between these two German Shepherd lines.

The German Shepherd Dog is also known as the Deutsche Schäferhund in Germany. He comes from a line of herding dogs, which varied from district to district. During the 19th Century, a cavalry officer made it his mission to create the ultimate herding dog. By breeding the best of the best, he created the German Shepherd that we all know and love today.

Not only was he proving to be a fantastic herding dog, but we humans quickly came to realize that he was protective and loyal. And this is why he is now one of the most popular choices of canine for the military and police services across the world.

He became popular in America in the 20th Century thanks to his newfound celebrity status as a film star in the likes of Rin Tin Tin and Strongheart. Because of his popularity, his population in America boomed. And over time, although the European line and the American line are the same breeds, they became distinctly different. It’s also important to know that we are not referencing the Eastern European Shepherd or the Dutch Shepherd which is an entirely different Shepherd line altogether.

When it comes to their coat, their coat length and texture are the same, and either line can have a shorter or longer coat. Their most common coat color is black and tan, and both can inherit the more unusual German Shepherd colors, such as solid black, white, and more rarely blue. The only difference here is, is that the American German Shepherd is usually lighter in color.

When it comes to their personality, the main difference between the American German Shepherd and the European German Shepherd is that the European variation is generally happier when doing a job. This is likely because they were purposefully bred as working dogs, in both the protection and herding fields. Compared to the American, who is now more commonly found as a family pet, and he is not put through his paces as much as the European.

Because the American German Shepherd is less work-oriented and less protective, he is also less focused on his master or his primary caregiver. Instead, he is generally more relaxed with the entire family and much less intense. And this is another reason why he would make a better family pet compared to a European German Shepherd.

The remaining aspects of their personalities are pretty much the same. They both make excellent family watchdogs and guard dogs if you need them to be. The American and European German Shepherds are both aloof with strangers, and even after getting to know someone, they will never be overly affectionate with them. Both variations of the breed are huge fun and love to cuddle up with their family in the evening.

This is not to say the American doesn’t need stimulation throughout the day, because he does. If you are an energetic family looking for an equally active canine to keep up with you, the European would be the better option for you. Equally, if you and your family are looking for an active dog who also has an off-switch every now and then, the American pooch is your best choice.

As they both require mental stimulation throughout the day, you will need to invest in a basket full of tough toys that he can keep himself busy with. Restless German Shepherds, be that American or European can become problematic and destructive. So, it’s best to keep them preoccupied.

Both the American and the European German Shepherd need early and consistent socialization for them to transform into polite pooches. Protective dogs can quickly turn into overprotective dogs if they are allowed to be. Socialization teaches them how to interact with other dogs and humans confidently, and without feeling fearful. So they both need intense training from an early age.

Again, they are both obedient and easily trainable, simply because of how loyal they are and their eagerness to please. But, when it comes to training, the European German Shepherd can be quicker to pick up commands. This is because he is the more intense workaholic, and his brain is wired to respond to and work with humans that bit more.

Thankfully, because they are both so smart and trainable. You don’t necessarily have to be an experienced dog owner to train either variation of the breed. All we would say is that the European German Shepherd can be more intense. They typically will thrive much better in a working environment. This means they can be more stubborn at times, which can be challenging to train them while walking on a harness, or other working activities.

The European German Shepherd is still prone to hip dysplasia. But because his topline is straighter and his poster is more balanced, he is less likely to develop it. The sloping back of the American increases the chance of hip dysplasia, and American breeders are becoming more aware of this, as well as the need to breed this trait out of the bloodline. Overall, the European line is healthier for sure.

Degenerative myelopathy is also another health concern in both German Shepherd lines. This is a condition that is known to affect the brain and the spine, which eventually leads to complete loss of rear mobility. Both lines are affected by this just as much as the other, so this is something to keep an eye out for.

Both the American German Shepherds and the European German Shepherds will do well on a high-quality kibble. Both variations of the breed need dog food created for the German Shepherd’s nutrient needs. Look for a kibble that has enough protein, energy, and sustenance to give them the fuel they need throughout the day.

Also, be sure to feed them a kibble that is life-stage appropriate. This is particularly important during puppyhood, as he needs extra power and particular nutrients for healthy development.

Always follow package instructions, and feed them according to their age, size, and energy levels. On average, each German Shepherd line will consume around three to four cups of food a day. Of course, if he is a working Shepherd, he will need much more.

The American German Shepherd and European German Shepherds are similar when it comes to their grooming regime. It all depends on whether he is a short-haired or a long-haired variety of the breed. If he is short-haired, he will only need brushing once a week. And if he is long-haired, he will require brushing two to three times a week to get rid of dead hair and dirt.

Regardless of whether they have a short or long coat, you can expect that they will shed the same. But with a long-haired Shepherd, it will be more noticeable. They will shed moderately throughout the year and heavily during the shedding season. So, if shedding dog breeds aren’t for you, neither the American nor the European will fit in well with your family.

Some argue it is a price worth paying because the European lines are healthier. But you need to remember that they are also much more intense and need more exercise, attention, and socialization training. Working out what you want in a dog is a more important consideration than price.

Whatever line you decide to pick, just be sure to work with a reputable breeder who will do their utmost to produce healthy and happy puppies. Avoid puppy mills and unscrupulous breeders at all costs, because it will only cost you more in the long run.

When it comes to personality, the European German Shepherd is more intense. They may also be slightly harder workers, depending on their parents. And although they are both family-friendly, the American German Shepherd is the better option for a typical family. The differences between the two will usually help a family decide between the two lines. So the question is, are you batting for the American team or swinging towards the European clan?

My one German Shepard's muzzle is shorter than my other. The one with the shorter muzzle is supposed to be of true German descent from Germany. Clear back on her mother's side. Is this why its shorter and her tail is shorter it this also why its still the right length?

Then another Narcotics K9. My 3rd adoptee was an Explosives Detection Dog. My Schutzhund training with my 1st pack was with Schutzhund/ K9 Trainers & Clubs.

So I do Tracking, Obedience, & Protection in their languages. I use mostly German. These 3 lived to 11,13,&14 years. I just lost my last one last month. Mine were black with red legs & my last one, an all black plush coat. I'm not ready yet but either another European German Shepherd or Maligator.

Sounds like you've had some amazing pups, Paula! It's hard to go wrong with any of these breeds. We have a friend that owns a Maligator, or "hair missle" as he likes to call him. Great pups if you can manage the energy! Good luck with your next dog!