Looking for the perfect German Shepherd Dog Names? This list of over 200 different names will help inspire the perfect moniker for your pup! 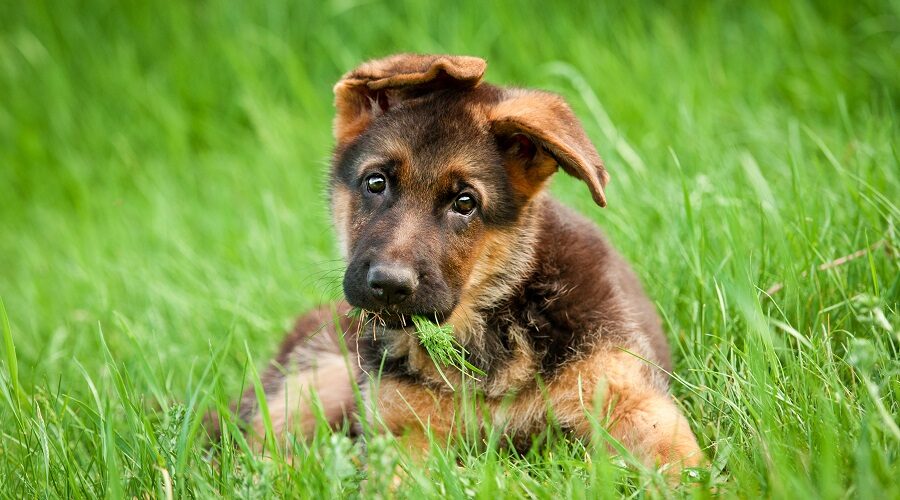 Getting a German Shepherd can be exciting for the whole family, but it’s also a lot of work! You’ll need to pick out the best treats and food, research the temperament of the breed, look into dog training classes, and pick out the right German Shepherd toys. The hardest part of getting a new dog, though, is naming it. German Shepherds can be even tricker to name!

Do you go with a German Dog name? Or just a Unique Dog Name? Maybe something that’s literary or musically inspired? Or perhaps after your favorite actor or film? Perhaps you name it after their physical traits, like a longer coat, or if their coat color is completely black or as white as snow? All of these can be great options, but matching your German Shepherd’s name to their personality is a must.

German Shepherds are one of the most popular dog breeds in the world. They are famously known as police dogs, and their loyalty is the stuff of legends. All of this build-up makes it even tougher to name this dog breed than others. You want a name that rolls off the tongue, but that will also make their heritage proud. It’s tough, but exciting to accomplish both.

A straightforward way to find the right name for your German is to check at the most popular names for German Shepherds. Let’s check out some German Shepherd favorites for both male and female pups for a little inspiration. These names can be equally good for German Shepherd mixes too, if you’ve decided to adopt a mix instead of a purebred.

If you’re less traditional in your naming, then maybe the most popular German Shepherd names aren’t your cup of tea. There are plenty of other sources you can look to for dog name inspiration. Your favorite movies can offer plenty of options for names. Human names are also becoming more popular for dogs, which means baby books are a great source. Here are some of our favorite names based on popular movies and TV shows:

Looking for a unique dog name for your German Shepherd that other people may or may not pick up on? Literary classics can offer name ideas that some dog owners haven’t thought of. You can consider modern literary works, or you can go with classics that some people might be more familiar with. Let’s look at some of our favorite German Shepherd literary-inspired names for your dog.

If you want to name your dog based on their heritage, you could also look to traditional German names or German legends and fairy tales for inspiration. These sources are exciting because they’ll allow you to have a unique backstory to the name you give your dog.

It’s been getting more and more popular to give dogs names that we traditionally reserved for humans. While we used to see many dogs named Fido, Rex, and Spot, you’re likely to encounter plenty of Norman’s, Henry’s, and Molly’s. It’s a fun switch that probably comes from our modern societal view that pets are family. If you’d like to give your fur baby a human name to go with their personality, then we’ve got some suggestions.

If you haven’t found love with any of the names we’ve suggested thus far, there’s still hope. Many people choose names for their pets based on the things they enjoy or based on their breed. For instance, since German Shepherds are common police dogs, many owners choose names based on weapons.

Other German Shepherd owners choose names based on their favorite beverages. Still, others choose sports teams or sports heroes for their dog’s name. If your German Shepherd is big, consider naming it after it’s physical size, with a name perfect for a bigger dog. You can choose whatever suits you, but we have some additional names listed below to help you out.

So you’ve narrowed down your list of potential German Shepherd names for your new furry friend, but how do you choose just one? There is actually science behind choosing a name, according to canine experts.

Tip #1: Use Two Syllables or Less

Dog behavioral experts tend to agree that two-syllable names are better than single-syllable names because it’s easier to either convey your pleasure or displeasure using two or more syllables. If you speak a two-syllable name with emphasis on the first syllable and a slide on the second, for instance, that usually conveys affection.

Tip #2: Human Names Can Be Fun

Some people think that using a human name for a dog can create awkward social interactions. Although it’s true that naming your dog “Kevin” and then yelling for him in a park full of people will inevitably result in at least one human Kevin appearing at your side, it doesn’t have to be an awkward situation. You can use the opportunity to joke around or make new friends.  A German Shepherd named “Bob” can be fun for everyone.

Another common rule of doggy naming is to avoid names that could confuse the pup as it learns commands. For example, Kit could easily sound like “sit” to an untrained dog ear, which may cause training complications. Some dog experts even say that you should choose a name with a hard consonant because dogs are more easily able to distinguish those sounds from softer sounds and, therefore, respond quicker.

One tried and true way to test out whether a dog’s name will work for you is to do the “back door test.” For this test, you quite literally go to the back door and yell your potential dog names. If you can’t stand the sound of one, then it’s out. This test helps to eliminate names that might sound funny or witty in private but could be awkward in public.

Tip #4: Use a Name That Will Age Well

We recommend going with a name that will stand the test of time. It might sound fun to name your dog after a pop culture moment, but what happens when the moment ends or, even worse, if that part of pop culture gets “canceled,” so to speak? It won’t be fun having to change your dog’s name because it suddenly becomes inappropriate or unpleasant.

It’s essential to remember that choosing one of the top 50 names for a German Shepherd could make meetups with other owners confusing. Heading to the dog park and yelling “Buster” to get your dog to come back only to have four additional dogs show up at your side, likely to the annoyance of their owners, won’t be a fun experience.

One excellent piece of advice we’ve heard only counts for those of us with multi-dog households. Experts recommend coming up with a group name for your pups in case you want them to all come at once. You could call them all “puppies,” “doggos,” or “troops.” Whatever it is, make sure that your dogs all know both their individual names and group name early on.

Choosing a name for your new German Shepherd is quite the task. Make sure you take the appropriate amount of time to deliberate on options and make a final decision once you’ve spent a little time with the dog and gotten to know its personality. Every dog is unique, and your dog deserves a name that fits his personality, breed, looks, and lifestyle.

Please include attribution to LoveYourDog.com with this graphic.

Why is My Dog Pawing at Me Constantly? What Does it Mean?

Why Do Dogs Sit, Sleep or Lay on Your Feet? Here’s 8 Reasons!