Thinking of welcoming a Dutch Shepherd or a German Shepherd into your home, but aren't sure which one to pick? Read on to find out more about both breeds! 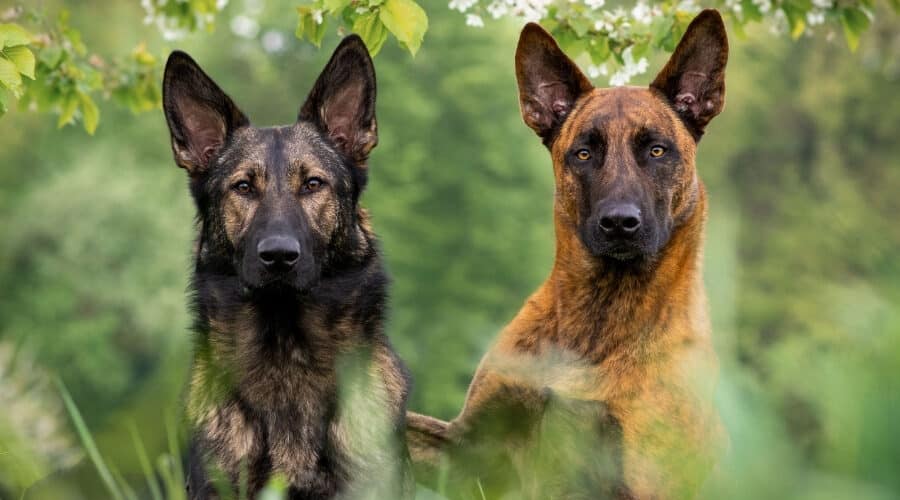 They are both Shepherds, and they both come from Europe, and just by looking at them, you can tell that they are related. Everyone knows that the German Shepherd is the most popular breed out of the two (unless you live in the Netherlands, of course), but not many people know the differences between them.

Before committing to either breed, it’s important to understand how they are similar, but how they are different. There are variances in puppy costs, temperaments, and more – all of which may impact which breed is a better fit for your household. So, let’s get to it and round up all the doggy details.

The history of a dog breed is super important in understanding what they are like today. Many dogs are bred with a purpose in mind. And it is this purpose that will shape their personality and physical traits and needs tremendously. Both the Dutch Shepherd and the German Shepherd have some differences in how the breeds originated, as well as how they were bred over time. Let’s learn a little bit more about each breed.

The Dutch Shepherd hails from the Netherlands and came to be in the 19th century. Farmers were on the lookout for a versatile dog that could assist them with everything. From herding the cows to pulling heavily laden dairy carts to the markets. And keeping the chickens from the veg patch and looking after the kids at night. This guy is a jack of all trades, and he did it all.

With the era of industrialization nearly came the end of the Dutch Shepherd, but thankfully, a few breed lovers saved the day. Although he is still very rare in America, he is popular in Europe as a farmhand. Being so versatile, he is also found in the military, search and rescue, and as an assistance dog. He is so rare in America that he is still in the Foundation Stock Group with the American Kennel Club (AKC).

The German Shepherd breed was created at the turn of the 19th century. A German officer wanted to create the ultimate herding breed, and he took the finest specimens from the different districts in Germany. His owners soon realized just how good he was, and he is now thought of as one of the hardest working all-around canines. This guy is also a jack of all trades.

According to the AKC, the German Shepherd is, in 2020, ranked as the second most popular dog breed in America. And this is a similar story across the globe. He first came to America at the turn of the 20th century. He suffered slightly due to the hatred caused by the War Worlds and all things German, but he quickly recovered after starring in a few Hollywood roles. Because of their popularity, German Shepherds have been embraced across the world as a loyal family pet, and have become the parents of many popular crossbreeds.

Their coat is their most significant difference. The Dutch Shepherd has the option of three jackets, which is a short coat, wire coat, and a long coat. The wire coat is curly and rough to the touch. The Dutch Shepherd has the option of one coat color, which is brindle, either with a gold or silver undertone. Breed lovers changed the breed standard so that he only had a brindle coat. Just so that he was distinctly different from other Shepherds in Europe.

The Dutch Shepherd and the German Shepherd are more similar in their temperament than their appearance. They are both original working dogs used on the farm as herders, estate protectors, and various other jobs. Their working backgrounds mean that they are both workaholics. And they are much happier with either a job to do or when they get lots of exercise.

The German Shepherd is usually more protective than the Dutch Shepherd because of he bonds with one particular master more than the Dutch. However, they are both affectionate and loving with their family. The Dutch will share his cuddles with the whole family, whereas the German more than likely reserve his cuddles for his primary caregiver when they are there.

They are both fantastic with children, and as long as they are socialized well, they will both get along with other family pets too. Both breeds would both prefer a larger home, and access to a secure yard is a must. They will both go stir-crazy if they are cooped up in an apartment for any length of time.

Their working energy means that their family needs to be able to either work or exercise them. And without it, they will become extremely agitated and problematic. That doesn’t bode well for either you or your furniture. So, if you aren’t an active family, neither of these guys are for you. They both need at least 60 minutes of exercise every day.

Both the Dutch Shepherd and the German Shepherd are very loyal and intelligent, meaning they are relatively easy to train. But, the German Shepherd is the better option for those who have never had a dog before. This is because the German Shepherd is so eager to please his master, he will always be ready to learn and obey your commands. And although he is intense, it makes your life much easier when it comes to training. Both pups are toy motivated, and can do well with doggy toys made for active or Shepherd breeds.

On the other hand, the Dutch Shepherd is more independent than the German Shepherd. This is because back in the day, his master expected him to herd the flocks, escort them into the fields in the morning, and back into their barns at night. All on his own. This independent streak makes him a little bit stubborn, and he’ll have days where he has something better to do.

Socialization is vital for both of these guys. Not only because it is an essential doggy skill anyway, but also because they are naturally protective. And it’s crucial that they do not become too overprotective. They also both do well when their master utilizes the positive reinforcement training method.

The Dutch Shepherd is a much healthier breed than the German Shepherd, which is clear from his longer lifespan. On average, the Dutch Shepherd enjoys four years longer than his German cousin.

Many German Shepherds have a sloping back, which has a detrimental effect on his hips. This is more common in the American lines of German Shepherds compared to the European lines. This is something to discuss with your breeder. He is also more at risk of degenerative myelopathy, which is a progressive disease of the spinal cord.

Although this is not a health concern, it is worth knowing that the Dutch Shepherd is very sensitive to anesthesia. He is a rare breed, so when you visit your vet for surgery, it’s worth reminding them of this.

Both the Dutch Shepherd and the German Shepherd are identical when it comes to their nutrition. They both need a high-quality shepherd formula kibble that will keep them sustained throughout the day. And one that is designed for large breed dogs that cater to their unique needs. This is particularly important during puppyhood.

They will consume approximately three to four cups of kibble a day, depending on their age, size, and energy levels. This will be more if they are a working dog. They are both at risk of gastric torsion, also known as bloat, so do not feed them immediately before or after exercise.

The differences between their grooming schedules all depend on their coat type. The German Shepherd can have a longer coat, or a shorter coat. Dutch Shepherds are the same. If they both have short hair, they both only require brushing once a week. If they have long hair, they both need brushing most days to keep matting at bay. For both of these coat types, we would suggest investing in a de-shedding tool as they are both heavy shedders come the shedding season.

The wire-coated Dutch Shepherd is the odd one out here. His coat is short to medium in length, but it is rough to the touch. He sometimes looks like a Poodle who is in desperate need of a groom! He will need either a pin brush or a comb running through his coat twice a week. wire-coated Dutch Shepherds sheds less than the other coats, but he’ll need a thorough clipping a few times a year.

When it comes to everything else, such as dental brushing, ear cleaning, and nail clipping, they are both the same as every other dog. Again, the only difference here is the wire-coated Dutch. Because he suffers from goniodysplasia, he will need his eyes cleaning once or twice a week. This is to ensure that they are kept clean and to prevent bacteria from building up.

The Dutch Shepherd is more expensive to purchase because he is much rarer, but he is also much healthier than the German Shepherd breed. Their grooming schedules are relatively equal, depending on what type of coat you choose for either. The German Shepherd is the more protective pup out of the two, but they both make excellent watchdogs.

Whoever you decide to pick, make sure that you can tick their boxes, otherwise, they can both be problematic. But if you can, know that you are in for many years of fun, love, and loyalty.

The German Shepherd vs. The Golden Retriever: Breed Comparison & More