Trying to decide between a Boston Terrier and a French Bulldog as your next pooch pal? These two breeds look like siblings, but their separate histories created some differences between them. Find out what sets these two apart! 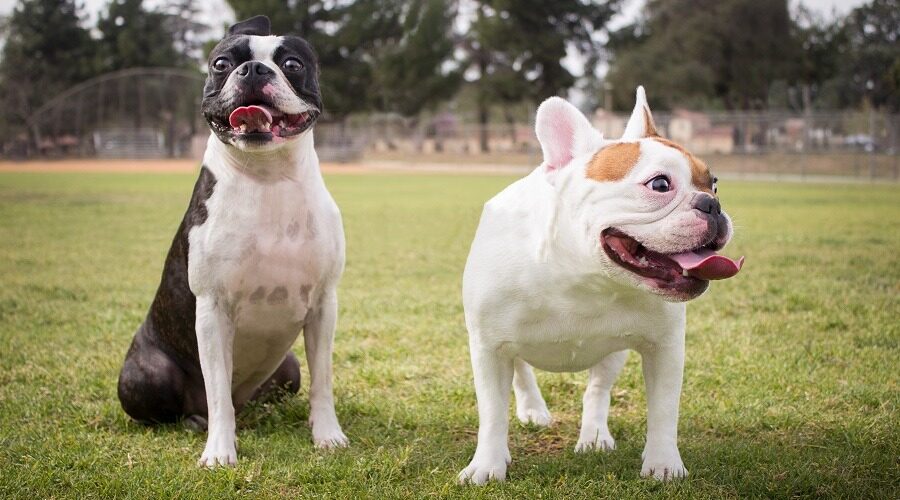 LIke the foxhound and the beagle, Frenchies and the Boston Terriers are often mistaken for one another, but they are very different and distinct breeds. They have different behavior tendencies, physical traits, and personalities.

While both breeds were bred to be companion animals, French Bulldogs are calmer than Boston Terriers. Let’s discuss this and other similarities and differences in the Boston Terrier vs the French Bulldog to help you pick the perfect pet for your lifestyle.

While they may look like close cousins, the Boston Terrier and the French Bulldog have a similar Bulldog ancestor but very different breed histories that diverge more than 150 years ago. In fact, they were developed on different continents, as their names would imply.

As a result, Boston Terriers and French Bulldogs have different temperaments, activity levels, and training requirements.

All Boston Terriers are descended from a white English Terrier and Bulldog mix named Judge. Judge was brought from Liverpool, England, to Boston, Massachusetts, and then sold to American Robert C. Hooper in 1870. Judge was bred to a small white female similar to Boston Terriers named Gyp, and years of selective breeding turned the blood sport Bulldog into a friendly companion dog.

Originally called the Round Head, Bullet Head, or Bull Terrier, the Boston Terrier was named after the city where it was developed in 1889. Often referred to as the “American Gentleman” thanks to his tuxedo-patterned fur, the Boston Terrier is the official dog of Massachusetts and the mascot of Boston University. Bostons are only one of ten dog breeds to originate in America.

In the mid-1800s, the toy Bulldog was brought by lacemakers from England to France and crossed with other breeds (like Pugs or Terriers). Toward the end of the 19th century, the popularity of the “Bouledogue Francais” had spread across Europe and the United States.

Americans insisted on breeding French Bulldogs with their now-classic bat ears rather than the traditional Bulldog rose ears. The bat ears are now a hallmark feature of the Frenchie that is recognized around the world. The French Bulldog is one of the most popular dogs in both Europe and the United States.

While the Boston Terrier and the French Bulldog may be of similar size and shape, with large upright ears and small corkscrew tails, there are several differences between the two breeds.

The biggest difference between the two breeds is their color. Boston Terriers have a “tuxedo coat” of white and either black, brindle, or seal (dark brown).

French Bulldogs, on the other hand, come in the following color varieties:

While their size and shape may appear similar, Boston Terriers tend to be smaller and leaner than the muscular French Bulldog. The two breeds also have different head shapes. Where the Boston Terrier has a square head with few to no wrinkles, the French Bulldog has a blockier head with many wrinkles.

Boston Terriers and French Bulldogs may have a similar appearance, but their personalities and home life needs are markedly different. If you can’t decide which breed would be better for you, pay special attention to this section to help you bring home the perfect breed for your family and lifestyle.

While Boston Terriers love pretty much everybody (whether they have two legs or four), French Bulldogs tend to be a little pickier with their affection. French Bulldogs love their families, but they may not get along with cats, other dogs, or small children unless they are well-socialized as young puppies.

Boston Terriers can be low-key homebodies if that’s what their families prefer, but they are equally happy and energetic enough to join their families on all their adventures, even active ones like hiking (as long as it isn’t too hot out, as they are prone to heatstroke).

On the other hand, French Bulldogs overheat quite easily and would prefer to stay home in the air conditioner with a couch potato human rather than traipsing through the woods.

Boston Terriers are more energetic and active than French Bulldogs. They need about 30-45 minutes of daily exercise whereas Frenchies need about 15-30 minutes. Boston Terriers also need mental stimulation; otherwise, they will get bored and tear up the pea patch. Frenchies can go a while simply lounging.

While both breeds can adapt well to apartment life with only short daily walks, only the Boston Terrier can also be active. French Bulldogs tend to overheat very easily and aren’t suitable exercise companions. French Bulldogs also can’t swim very well and might be in danger if allowed loose in a yard with a pool.

If you’re a weekend warrior who likes to be active on the weekends and relax at home during the week, the Boston Terrier will be a better fit, whereas the French Bulldog is a homebody’s best friend.

Both breeds can be stubborn when it comes to training, but Boston Terriers tend to be a little more eager to please than the strong-willed French Bulldog. Positive reinforcement and consistency are key to training either breed, although the Frenchie, with their clownish personality, may put their own spin on what you ask of them.

Punishment or dominance-based training techniques are likely to destroy the spirit of either the Boston Terrier or the French Bulldog. They rely heavily on their bond with their people and having that bond damage can cause psychological problems. If you have questions about training, contact a local dog trainer for advice on how to work with your Boston Terrier or French Bulldog.

While nearly any dog breed can be socialized to live peacefully with pets or children, Boston Terriers are naturally friendlier with all creatures than the more reserved French Bulldog.

One area where the Boston Terrier and the French Bulldog are quite similar is their health concerns. Since they are both brachycephalic (flat-faced) breeds with corkscrew tails, they are prone to many of the same health problems. Both breeds are prone to the following health conditions:

The best way to increase your chances of getting a healthy Boston Terrier or French Bulldog is to carefully research breeders as you search for a puppy. Reputable dog breeders will do health testing – such as a patella evaluation, ophthalmologist evaluation, BAER testing, hip evaluation, and a cardiac exam – on dogs they intend to breed.

Both breeds have similar life expectancies. While the French Bulldog lives around 10 to 12 years, the Boston Terrier has a slightly longer life expectancy at 11 to 13 years. Buying a puppy from a reputable breeder who does health testing on their breeding dogs, feeding your dog a healthy diet, and making sure they don’t become overweight can all help extend your dog’s life.

Both the Boston Terrier and the French Bulldog require only about a cup of kibble each day and they cost about the same to feed. They both are likely to be on a small breed diet. They are also both prone to being greedy when it comes to food, so low-calorie kibble can help, as well as monitoring treat intake.

There are several foods we think work well for the French Bulldog, and you can find that food list here. It is good to note that they can often become bored with a standard dry kibble (can’t blame them!) and may beg for human food or table scraps. Since they are prone to obesity, it is best to leave them with their nutritious kibble.

We also have a complete nutritional guide for our favorite Boston Terrier dog foods as well. It is good to note that the Boston Terrier is well-known for flatulence, so food with high-fiber content, probiotics, and yucca extract can help. There is also a list of dog foods for gassy dogs that we also recommend for your Boston that breaks wind.

Luckily, Boston Terriers and French Bulldogs have similar, low-maintenance grooming needs. Boston Terriers usually shed very little, while French Bulldogs are mild to moderate shedders. Both breeds will benefit from brushing with a rubber curry-style brush (like the Zoom Groom) once a week to remove loose hair and spread their natural oil.

Both breeds need the occasional bath, but if you plan to wash them more than once a month or so, use a very gentle shampoo made for dogs and consider using a conditioner, too. These breeds are both prone to dry skin, and frequent washing can make dry skin worse.

Both breeds are prone to tear stains and should have their faces wiped down daily, while French Bulldogs also need to heave their wrinkles cleaned regularly to prevent sores or infections.

If you choose to buy a puppy, Boston Terriers typically range in price from $700 to $2,700. Thanks to their popularity, French Bulldog puppies usually range from $1,200 to $8,000, depending on the quality of the breed. If you’re lucky enough to find a Boston Terrier or French Bulldog in a shelter or rescue, adoption fees may be as little as $100 to $400.

French Bulldogs are the 4th-most-popular dog breed in the AKC, and Boston Terriers are the 21st. Thanks to their popularity, there are plenty of breeders looking to make a quick buck who aren’t interested in improving the health or quality of the breed they specialize in.

Puppies from puppy mills and disreputable backyard breeders are more likely to have health and behavioral problems as a result of poor breeding practices. Don’t support these sometimes-cruel practices. Look for these warning signs to avoid bad breeders:

Reputable breeders want to have the healthiest puppies and send them to the best homes. These are clues that your puppy is likely to be healthy and happy.

Boston Terriers and French Bulldogs are both great family dogs, and either breed might be right for your family. While they may look the same, they have different personalities that will do better with different families.

Where the Boston Terrier is gregarious, loves everybody, and has the energy to join their family on adventures.  The French Bulldog is similar to the Pug and who is reserved with new people or pets and prefers a sedentary lifestyle.

Both breeds have low grooming needs and many of the same health issues and their similar appearance may make it even more difficult to decide which breed is best for you and your family.

Hopefully, this guide has given you the information you need to decide whether the Boston Terrier vs the French Bulldog is the better pet for your family and situation. Either way, you’re certain to end up with a lovable family companion who will adore you, even if you live in an apartment in the city rather than a rural or suburban home with a yard.

Bostons are absolutely my favorite breed of dog. I will always have one right by my side :)