Foxhound vs. Beagle (Breed Comparison): What Are the Differences? 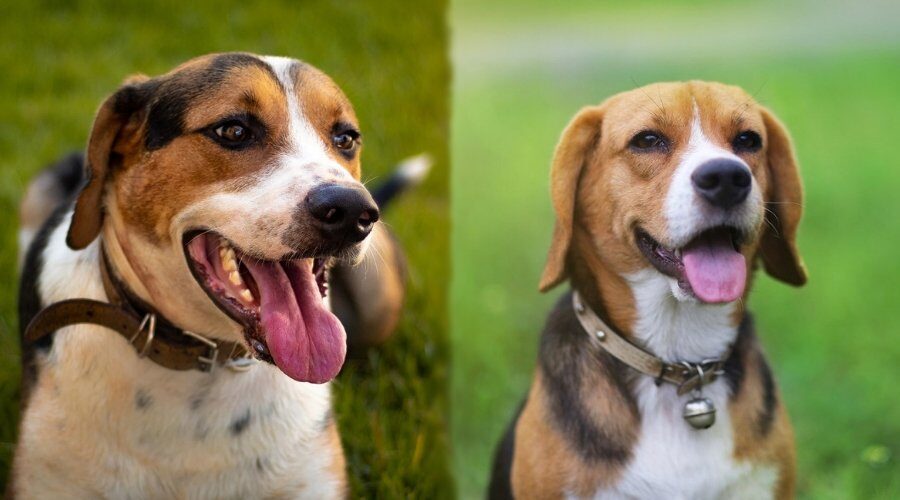 Hunting dogs are great breeds—especially, of course, if you like to hunt. Even if you don’t, they show great traits of intelligence and loyalty.

While Foxhounds and Beagles come from the same ancestry, they have been developed over the years to specialize in a different game with different specific traits. If you’re considering owning one of these breeds, you should take into consideration both their similarities and their differences.

Let’s look at both of these dogs, the difference and their similarities.  Both are great breeds that can make a great addition to any family.

Foxhounds and beagles have been trusted throughout various hunting endeavors since as early as the 14th century, where they were used by even royalty to hunt hares and rabbits. Since then, these kinds of dogs have been bred and cross-bred to achieve only the best in hunting traits.

Though they have their differences, it’s clear that both Foxhounds and Beagles are incredibly intelligent. Since they are used in hunting, they have to be very trainable. They have excellent senses and are very loyal to their masters.

However, both breeds tend to have traits of stubbornness and impatience, and they are very independent. They are not likely to be shadows to their owners, but they also are not known to be dominant.

The most obvious similarity between the Foxhound and the Beagle is their appearance. Both dogs have short, straight hair that comes in similar colors and patterns. These patterns feature colors of white, black, tan, brown, and red shades, and they are very low maintenance in terms of grooming and dander. Both are considered hounds, similar to the dachshund.

Overall, both of these breeds tend to be very friendly. They behave well around families, kids, and other pets. Even though they are both known to be stubborn with a lack of patience and focus, they are affectionate and loving animals.

Foxhounds and Beagles both function best when they have a lot of space. Homes with large yards provide them enough space to run and roam. Another similarity, though not necessarily a positive one, is that they both have a tendency to bark and howl.  Both breeds are great with kids, and beagles are commonly crossbred with other breeds as designer dogs.

As similar as these two breeds are in both appearance and mannerisms, they do have their differences. It’s important to highlight these differences for anyone who is seriously considering getting either one of these.

Both breeds are great for families, but they do have some very distinct differences between their temperament, size, personality and capacity to learn during training sessions.

Foxhounds tend to be more independent and a little warier of strangers, though they are not aggressive. They may not be as cuddly and affection as Beagles, but they are willing to please their masters.

Both of these breeds have exercise needs—as many dogs do—however, the Foxhound requires much more physical activity due to its high energy levels. Foxhound owners should have a lot of land where their dog can run freely. Foxhounds are great for families with high levels of activity, and kids who like to play outside a lot.

A Beagle’s energy level ranges more in the medium range, which makes it more suited for apartment living than a Foxhound. These dogs are very adaptable and will adjust better to their environment. They would do just fine with plenty of walks or a moderately-sized yard with a fence.

Neither of these dogs would make good guard dogs, as they prefer to accept unfamiliar people as friends.

The main difference in a Foxhound and Beagle physically is their size. While their fur color is very similar, the Foxhound is much bigger than the Beagle.

In terms of strength, Foxhounds dominate in this area as well. Beagles are not very strong, while Foxhounds have the potential to be very strong.

Both the Foxhound and the Beagle are friendly dogs with good amounts of loyalty; however, the Beagle is more friendly than the Foxhound. Beagles are more likely to approach strangers or show affection. They love attention and cuddling, and they do not like being left alone.

Foxhounds do not particularly like to be left alone either, but since they are more active and need more attention and exercise than Beagles, they can become destructive when they’re lonely or bored.

Surprisingly, with their other traits in mind, Beagles are known to be a little more intelligent than Foxhounds, who have average intelligence. Because of traits like this, Beagles are better choices for new pet owners, and Foxhounds should be owned by experienced dog owners.

Because Beagles are easy to train, it’s great to get them into basic obedience lessons right away.  Once they start to learn, you can also teach them basic tricks and commands.

Beagles are generally easier to train than Foxhounds. While they may come off as independent and stubborn at first, they work well with positive reinforcement training. Foxhounds are certainly smart and trainable but may take a little more work than Beagles.

It is common to have a list of questions before buying any kind of pet, but especially a pet as specific as a hunting dog. Many hunters want an intelligent dog that’s not only going to get the job done but serve as an excellent companion and family member.

Take a look at some of the common questions about Foxhounds and Beagles. You may find your question is already answered.

Q: Which is better for hunting: The Foxhound or the Beagle?

A: Though both of these breeds were historically used for hunting—the Beagle for small game and the Foxhound for large game—the Foxhound is more readily used today. Beagles are very friendly, loving, and affectionate dogs, so they tend to be better as household family pets.

Foxhounds love the outdoors and wide-open spaces. They have the innate desire to track and make excellent hunting companions. While you can train your Beagle to hunt, it’s likely that you will have better success with a Foxhound.

Q: Are Foxhounds and Beagles Healthy?

A: Overall, Foxhounds are considered to be very healthy dogs. Both the English and the American Foxhound do not hold any recommendations for particular health tests. However, it’s always best to keep up with regular vet visits.

Though the risk is not high, Foxhounds can be at risk for bloat, eat infections, dental issues, hip dysplasia, and thrombocytopathy.

While Beagles have a longer life expectancy, they are also at risk for more health issues than Foxhounds. The National Breed Club recommends that Beagles owners have their dogs complete an ophthalmologist evaluation, a hip evaluation, and an MLS DNA test.

As with any breed, your dog’s diet and lifestyle will play a significant role in their health. As a pet owner, it is important to take responsible steps towards maintaining your Foxhound or Beagle’s health.

Q: How much do they cost?

Be aware of pricing when you purchase either of these puppies. If they are outside of these ranges, they are most like red flags. Overcharging is an obvious negative, but undercharging could show signs of poor breeding, neglect, or improper care.

The price of your puppy will depend on your location, the age of the pup, their registration type, and whether they are coming from a breeder, a shelter, or even a puppy mill. You should also be aware that about 30% of dogs in the shelter are purebreds. While there’s no guarantee, it’s always a good idea to take a look there as well.

A: If you have a cat at home and are concerned about its safety after getting a hunting dog, rest assured. Most dogs, if brought home as puppies, will grow up around your cat and will most likely get along with it just fine. Since it is being raised around the cat, it will be used to its presence and may even be friends with it.

Beagles are especially good with cats along with other animals. Since they were originally bred to hunt in packs, they play well with others and will probably view your cat as a member of its pack.

In the same way, Foxhounds are known to get along with just about anybody, from your small children to your household cat. Like other dogs, it’s best if they are raised around your cat. However, even if they seem okay hanging around your cat, it’s not a good idea to leave them alone unsupervised unless you’re absolutely comfortable.

Q: Where Did Hunting Dogs Come From?

A: As we mentioned briefly earlier, Beagles and Foxhounds have an extensive history that dates back centuries. For a long time, Beagles were the most popular small hound in England, gaining use and fame in the 1300s. Many people, including the royal family, used Beagles to hunt small game.

The name Beagles come from the Old English word “begle,” which actually means small. During that time period, Beagles were even smaller than they are today. It is said that Queen Elizabeth I had a pack of six-inch Beagles. These dogs were used for hunting mainly hares and rabbits.

As the years went on, Beagles, along with other hunting dogs like Foxhounds, were strategically interbred to enhance their gene pools and increase their overall traits. Between the 1600s and 1700s, many Beagles and Hounds were interbred, producing some of the top Foxhounds ever seen in that time.

Other interbreeding included Foxhounds with Greyhounds and Spanish Pointers. This kind of breeding improved scenting ability and mobility, both of which made the Foxhound great for hunting.

As the Beagle was continuously used for small game and on-foot hunting, the Foxhound was used for large game and horseback hunting. In the 1600s, both of these breeds were introduced in America. George Washington himself was even a fan of the American Foxhound.

Since then, many folks have continued the traditional use of these pets in hunting, though the Foxhound is now more commonly used than the Beagle, who tends to appear as more of a family pet than a trained hunter.

Q: How Much do Foxhounds and Beagles Eat?

A: The more active the dog, the more nourishment they need. That being said, not all dogs stop when they’re full. This is especially true for Beagles. They are known to be “food thieves,” meaning they will steal any food they see. If given the chance, Beagles will raid you snack pantry and knock over your garbage can for an extra snack.

In addition, a Beagle is likely going to eat any food you put in front of him. For this reason, it’s vital that you measure their food carefully and only feed them twice a day rather than leaving food out all day.

Foxhounds also have very hearty appetites, but unlike smaller breeds, they benefit from a good balance of nutrients like minerals and vitamins. At the same time, they are also more prone to bloating and stomach issues.

Foxhounds and Beagles can make great pets if you know what you’re getting into. It’s very important to recognize and act upon the individual needs of each breed. Though they were both originally used in hunting, the Beagle has become more accustomed to a life of playing, cuddling, and eating. On the flip side, Foxhounds need lots of open space and tons of exercise.

If you’re considering getting one of these dogs for hunting, it’s also vital that you know the amount of effort that goes into training. These stubborn dogs are very smart, but not as eager to please as some breeds. As long as you stick with it and give them plenty of attention and affirmation, you could have yourself a fine hunting companion.