Are you comparing the Pug and French Bulldog for your next family pet? These two breeds share similar looks but have differences in temperament, energy, and price. Find out what you can expect from both breeds! 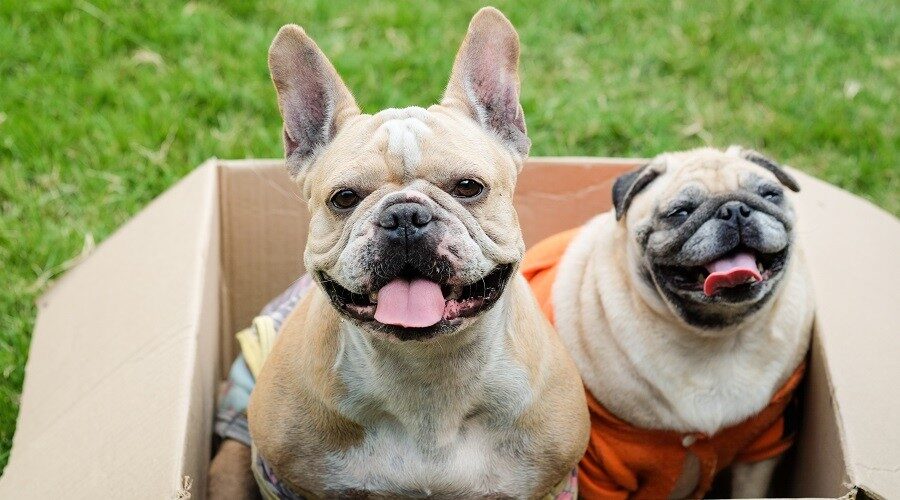 The Pug and the French Bulldog are well-known canines that are loved across the globe. Very distinctive in their features and feisty personalities, they are popular amongst citizens, Royalty, the hip youngsters, and the relaxed pensioners alike.

They are very similar in size, health problems, and cuteness. Despite being the smaller of the two, the Pug is much more active than the French Bulldog and requires more attention and mental stimulation throughout the day.

Although it is not entirely certain, it is believed that the Pug was used in the development of the French Bulldog.

These guys share very different history, with the Pug being much older than the French Bulldog.

The Pug is an ancient breed dating back thousands of years ago. He was favored by the Chinese Emperors’ who had a soft spot for small flat-faced canines. Only those who were appointed by the Kingdom could have him as a pet unless you were lucky enough to be gifted him by the Emperor himself.

The Pug later became a common citizen when Dutch travelers returned with him to the Netherlands, and he came to be a big hit with Royalty and locals alike. It is even rumored that a Pug saved the life of a Prince, and as such, he became the mascot of the House of Orange.

He is also amusingly known as the Dutch Mastiff, as there is a lot of soul and fight in this little guy. The American Kennel Club (AKC) has ranked his popularity at number 28 out of 193 breeds in America. They are a popular breed to cross with other breeds like the Corgi or the Pug & the Chihuahua.

The French Bulldog’s journey actually began in Nottingham England, and not France as his name suggests. The toy Bulldog was popular amongst the lace traders in central England and became somewhat of a mascot for them. When the demand for their trade lessened, the lace-makers relocated to the French countryside. He also proved to be an instant hit there and over several decades the breed was crossed with other breeds, possibly the Pug.

America saved his iconic ears by insisting they were the ‘correct’ type, over the rose-shaped ear in the early 20th Century. Ever since then he has become a very popular breed thanks to his adorable features and playful personality and the AKC currently ranks him as the 4th most popular dog breed in America. They are also commonly mistaken for Boston Terriers.

Both the Pug and the French Bulldog are similar in their height, with the Pug measuring short at 10 to 12 inches, with the Frenchie measuring 11 to 13 inches. Despite their similar height, they are significantly different in their weight. The Pug weighs only 14 to 18 pounds, whereas the French Bulldog weighs 20 to 28 pounds. That extra weight mainly takes the form of muscle, and so he is much stockier than the Pug.

Despite both being small toy dogs they have distinct features that set them apart. Most notably, the Pug has small floppy ears that drop down, whereas the French Bulldog has large bat-like ears that stand to attention. The Pug has a very flat wrinkled muzzle, and the wrinkles continue beyond his nose and up to his forehead, similarly, the French Bulldog also has a flat face, but not quite as flat and definitely not as wrinkly.

Further to the obvious features, the Pug also has a curly tail, whereas the French Bulldog has a short tail. The Pug only has two coat colors which are solid black or fawn with a black mask. On rare occasions, you’ll see a white or Leucistic colored Pug. The Frenchie has 11 coat colors, 9 of which are recognized by the AKC. The Pug’s coat is medium in length, and very dense and coarse, whereas the Frenchie has very short and smooth hair. Because of their

The Pug and the French Bulldog are both very friendly and affectionate with both their family, friends, strangers, and other animals alike; everyone is their new playmate whether they want to be or not! They are great with children, not only because of their small stature but because they are gentle and generally tolerant of them. Because of their smaller stature, these pups are often mixed together to create the Frug, which is a Frenchie Pug mix.

Because they are so sociable and crave companionship and interaction, they are both known to suffer from separation anxiety. Despite their small stature, they can wreak havoc amongst your furniture if they are left alone too long or not stimulated enough. If you think you might leave them alone for long periods of time then neither of these breeds is right for you.

They both have a silly nature and like to be the center of attention, so you can guarantee to be in for a laugh or two with these little guys! Many Pug parents say their pups tend to keep their puppy persona into adulthood and never really grow out of it, whereas the Frenchie is more likely to become wiser in his old age.

On top of this, constant sniffling and snorting will grace the time you spend with both the Pug and the Frenchie; some people find it adorable while others find it irritating, so you must decide if you can handle this trait. Flatulence is also heightened in flat-faced breeds, apparently, their life motto is ‘sharing is caring,” so be prepared for the stink!

The Pug is considered to be a medium-energy dog that requires around 40 minutes of exercise a day. He loves to scoot around and play and is quite the speedy Gonzalez! On top of his daily exercise, he also requires active games, such as tug of war or general play fighting, and mental stimulation such as learning new tricks. Don’t be fooled into thinking this small guy requires minimal exercise, for he definitely needs quite a bit for a small dog.

On the other hand, the French Bulldog is less active and is considered to be a low-energy dog. He will only require 30 minutes or less a day, and he is quite happy to chill and nap in between.

Both of these dogs, because of their flat faces and associated health conditions, do not cope very well in the heat or humidity so their exercise needs will have to be adjusted on a warm day more so than your average pup. Early morning and night walks when it is much cooler is the best time to walk them both, but still, be sure to monitor them and keep them inside if necessary.

Both the Pug and the French Bulldog are intelligent despite their love for clownish antics and they can often pick up commands quite easily. However, they are also known to be stubborn when they want to be, so you have to be both persistent and consistent.

Both breeds need early socialization to ensure they are comfortable in all situations and with all people and other animals; if you can master this at an early age then you have set an easier life for both you and your pup. Ensure to make every experience as positive and enjoyable as possible, and when they have behaved or reacted well then be sure to reward them with treats and plenty of verbal praise.

If you plan to train with a harness, make sure you grab a harness that’s the right size for a Pug or the Frenchie.

Both the Pug and the French Bulldog are prone to a long list of health concerns compared to the average pup. The main health concern they both share is the Brachycephalic Syndrome which is caused by their flat faces, and this causes issues with their breathing and their heat control.

Further, the Pug is also prone to:

The Pug is susceptible to a range of eye diseases such as corneal ulcers, pigmentary keratitis, proptosis, progressive retinal atrophy, entropion, and dry eye. Because the Pug has large bulging eyes, they are often prone to general eye injuries.

Generally, the Pug will suffer from sensitive skin, and he is also prone to specific skin issues such as demodectic mange, staph infection, yeast infections, and cheyletiella dermatitis.

This is an inflammation of the brain tissues which causes pain and seizures. The symptoms can be alleviated with medication; however, it reduces their lifespan significantly. This disease is unique to the Pug.

Further to the Brachycephalic Syndrome and the skin issues described above, the Frenchie is also concerned with:

Due to his large ears, he catches all the gunk, as a result of this, he is prone to a vast array of ear infections and problems. Be sure to clean them at least once a week. They are also prone to frostbite so invest in some Frenchie ear warmers, also known as the bat hat!

Also known as IVDD, it occurs when a disc in the pup’s spine ruptures and can cause a severe amount of pain or total paralysis.

As with any pup, if there is anything you are not sure about then be sure to ask your veterinarian. As these guys suffer from more health issues than the average pup it is really important to do your research into their concerns and gain a full understanding, particularly the Brachycephalic Syndrome, as their lower than average health will undoubtedly affect your life with them.

Because of their vast amount of skin allergies and dermatitis, it is important to ask the Veterinarian about the best food to give them, as they may require specialist food to help alleviate the symptoms.

The Pug and the French Bulldog require occasional baths, once every 2 or 3 months will be adequate if they don’t get too dirty exercising. Refrain from washing them more than this as you risk damaging their natural coat oils and ensure you use gentle products.

Thanks to their wrinkles and extra folds of skin they often find themselves wafting a strong canine smell if not cleaned properly. Their wrinkles will require special attention, cleaning with a cotton bud and special cleaning solutions to keep skin infections at bay.

A Pug will need brushing 2 to 3 times a week, whereas the Frenchie will only require brushing once to keep him looking healthy. They both shed when the months start to warm up, but the Pug sheds more so due to his longer and denser hair.

Around 81% of the French Bulldog litters are born via cesarean due to their physiology, so the extra medical attention and expert knowledge account for their slightly heightened price.

Due to their health issues, it is important to purchase a pup from a reputable breeder who will ensure that strict breeding practices are adhered to so you know your pup is as healthy as he can possibly be. Be sure to ask for all the relevant health certificates.

Both the Pug and French Bulldog are crowd-pleasers and heart stealers! They are little guys who have huge personalities and adorable distinctive looks. They do have a long list of potential health problems, but as long as you are prepared, medication and attention can, in most cases, ensure they are manageable.

So, as long as you have the time and money, they will happily fill that little canine-shaped hole in your life!