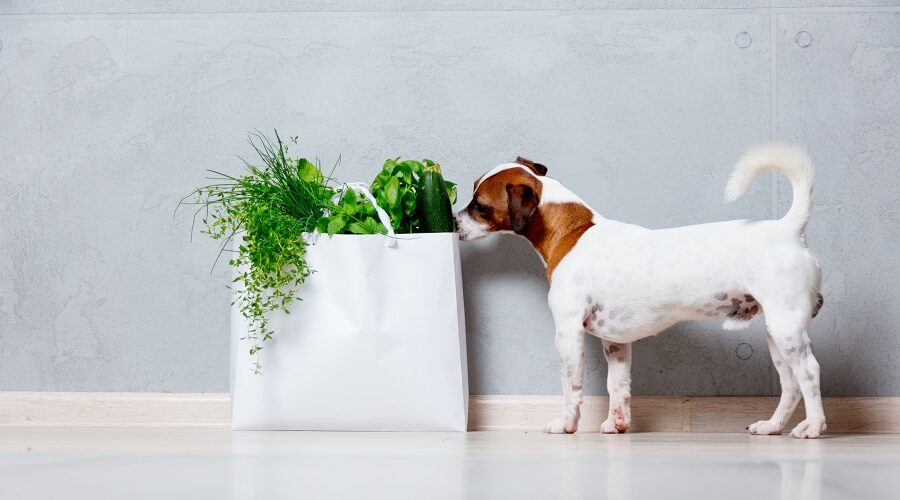 You’ve landed on this page looking to find out if dogs can eat Zucchini.  The short answer is Yes, as long as your dog isn’t allergic to them, Zucchini is quite a healthy snack for canines. Zucchini, ‘marrow’ or ‘courgettes’ as they’re known in some parts of the world, are a delicious, easy-to-grow vegetable that’s packed with good nutrition. We know veggies like sweet potatoes are good for dogs, but is Zucchini as good for dogs as it is for us?

Zucchini are a type of cucurbit (a family that includes cucumbers, melons, and squash) that grows easily in a northern climate. They are usually mottled green, but similar to peppers, they can also be solid green or yellow. The skin on Zucchini is also very thin, while the inside of the zucchini is fleshy and soft. They are usually long and thin, but round cultivars also exist. In other English-speaking parts of the world, they are known as marrow, baby marrow, and courgettes.

Zucchini are considered generally safe for dogs to eat, as are other members of the cucurbit family. They do not cause many adverse effects, except where too much zucchini is given, or if an individual dog is intolerant of zucchini. Almost all dogs can eat zucchini quite happily.  Let’s look at some additional detail into this antioxidant-packed veggie, as well as the nutrients it can add to your dog’s diet.

Zucchini is very low in calories, containing just 17 calories in a cup of cooked zucchini. It’s also low in fat, containing just a gram in a cup. This makes it perfect for adding to the diets of dogs that need to lose weight in place of some of their other, fattier, treats. For instance, swapping out a large milk bone (115 calories) for a chunk of zucchini (5 calories) means your dog is getting 110 fewer calories whilst still feeling that they’re getting a special treat.

In addition to the low-calorie count, zucchini is also high in vitamin A, which is one of the most important vitamins for your dog. Courgettes also contain a large percentage of your dog’s daily needs for manganese, a mineral that can be hard to find in many vegetables.

According to the USDA, they also contain Vitamin C, K, and B6, magnesium, potassium, folate, phosphorus and copper- all things that your dog’s body needs in small amounts. They also contain carotenoids, an important antioxidant that has been studied for its effects on blood sugar and insulin levels. There has also been some research suggesting that zucchini seeds may have an effect on prostate problems, reducing the size of the prostate, although this research needs further study before any definitive conclusions can be made.

Introducing Zucchini to Your Dog

If you think you’d like to introduce zucchini to your dog’s diet, then its important to introduce it slowly. Any dog can be intolerant to any food, so it’s safest to assume that your dog could have a problem and be cautious. Start off by giving your dog a small piece of zucchini, about the size of a piece of their kibble. If they’re fine after 24 hours, you can give them a little more. If, after 24 hours, they’ve still shown no adverse effects (usually manifesting as diarrhea, inappetence, vomiting, or itchiness) then they’re probably safe to eat zucchini.

Most people add zucchini to their dog’s diet as an occasional treat. Remember that your dog’s diet is carefully balanced to have everything they need in it, and upsetting that balance can cause problems. For some minerals, more is not always better, so it’s important to take care that your dog’s kibble still makes up the majority of their diet.

You can give up to 10% of your pet’s calorie allowance in treats without upsetting the balance, but you must remember to remove some calories from their usual diet so that they have the same total calories overall. For instance, a 15kg dog of a healthy weight and average exercise can have around 75 calories of treats and extras a day but needs 75 fewer calories in their daily kibble ration. Your local veterinary clinic can help with these calculations to ensure you don’t overfeed your dog.

If you want to add zucchini to your dog’s diet more often, it might be easier to research a diet that already contains zucchini as part of its balanced ingredients. As always, we recommend you look closely at the company and evaluate their credibility before buying any new food. The WSAVA (World Small Animal Veterinary Association) has produced this document to help pet owners.

Remember, you should always change your dog’s diet slowly, by carefully increasing the amount of the new diet and decreasing the amount of the old diet over at least a week- two weeks for dogs that are prone to stomach upsets. You should also remember that every food has a different calorie content, so if you do change the food you should read the feeding guidelines of the new food to check how much your dog needs.

Although zucchini isn’t a common ingredient in dog food, perhaps in part to it being a very seasonal vegetable that’s expensive for much of the year, it is found in a few dog foods. Some quick web research yielded us around 30 dog food varieties that include zucchini.

Some of the brands that use Zucchini in their formulas include Canidae and Orijen.  These are both brands we’ve compared and reviewed in the past.  If you’d like a dry food that includes Zucchini, you fan find it in Orijen’s Six Fish formula which we recommend for Golden Retrievers and also recommend for German Shepherds. Canidae also has formulas that include Zucchini as an ingredient, and Canidae makes some of our favorite recipes for Larger puppies as well as for smaller breeds.

Zucchinis are a common constituent of ‘biologically appropriate’ style dog foods- those that market themselves as being better for your dog because they are more similar to what a wolf would eat. They’re a much less common ingredient in dry kibble, and they are least common in canned dog food. They’re probably added for their nutrient profile, as zucchinis have lots of vitamins and minerals that may be hard to find elsewhere.

Like humans, dogs can eat zucchini raw or cooked- it doesn’t matter. Dogs may prefer cool cooked zucchini, as this has a higher sugar content and tastes sweeter. Most dogs will happily snack on a slice of raw zucchini, though, and they are far more nutritious than junk food like graham crackers! If you do cook zucchini for your dog, baking it without oil is often the best method to prepare it. Be careful that you don’t cook it alongside other things that we humans eat- garlic and oils are both commonly cooked with zucchini and both can cause problems for your dogs.

Q: Can Dogs Eat The Skin?
A: Dogs can eat zucchini skin, just as they can eat the rest of the zucchini fruit. In fact, like many other vegetables, the skin contains most of the vitamins and minerals- especially in comparison to the flesh, which can be quite watery. Do bear in mind, though, that the skin can be a little sharp, hard or crunchy, and some dogs may not like this. The skin is edible though, unlike other fruits.

Q: Can They Eat The Seeds?
A: Whilst many varieties of zucchini have been bred to have as few seeds as possible, your dog may well eat one or two whilst they are chowing down on zucchini. Luckily, there are no known side effects for dogs eating zucchini; unlike many other seeds they don’t contain cyanide or other dangerous chemicals.

Q: Can All Dogs Eat It?
A: There are not known to be any breeds of dogs that shouldn’t eat zucchini. There are also no known problems with gender. It’s not a good idea to feed a puppy zucchini (apart from a tiny taste) until they are older than six months, as they need extremely carefully balanced nutrition while they are growing. Senior pups can enjoy zucchini in careful amounts, too. There are no diseases that are thought to be influenced by eating zucchini. In other words, other than very young puppies, all dogs can have a bit of zucchini.

Q: Do All Pups Like It?
A: Many dogs like zucchini as a snack or as an addition to their diet, but this all depends on your dog’s preferences. It’s a good idea to introduce your dog to a variety of tastes and textures early on so that they are better able to accept new flavors as they get older. Some dogs will try zucchini and spit it back out– it’s usually a good idea to try again, as they may well accept it a second time. If your dog doesn’t like zucchini after a couple of days of trying, they probably don’t like it, Of course, you can try to cook it to change the flavor and texture, they may well like it if it’s cooked differently.

Taken in moderation, zucchini is a healthy treat for almost all dogs. It’s well-tolerated and full of vitamins and minerals whilst remaining low in calories, making it a wonderful snack or treat. Providing different textures and flavors is a great way to keep your dog’s brain active as they age. Of course, every dog is different, so we recommend you introduce it slowly and try a small piece first before giving larger amounts.

Can Dogs Eat Shrimp? What Happens When They Do?

Blue Buffalo vs. Wellness: Which Dog Food is Better?