Trying to figure out if it's safe to feed your dog oatmeal? We answer all your oatmeal related questions, including how much and how often to feed your pup! 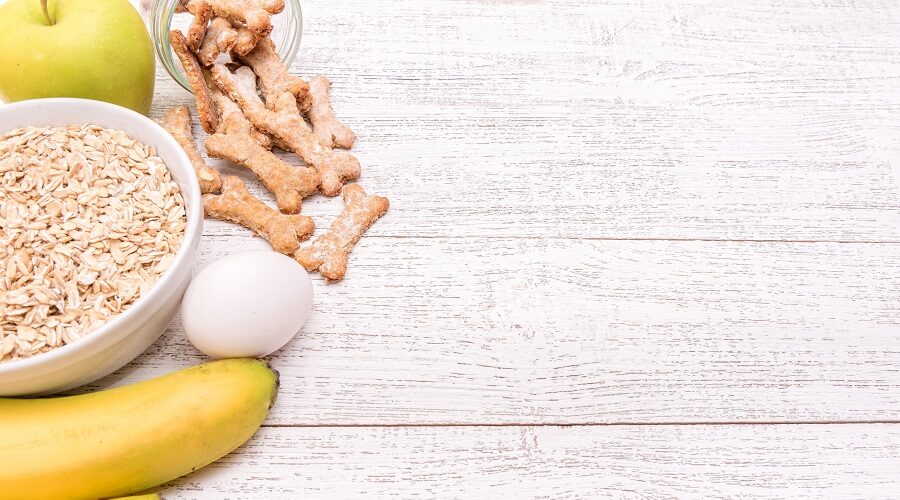 This article was written by a veterinarian, but it should not substitute as contact with a trained professional. While oatmeal is generally safe for dogs, we recommend you contact your veterinarian if your dog is reacting poorly after consuming it.

We’re all familiar with oatmeal, and whether you love it or hate it, there’s no denying it’s filling and healthy. If you like eating oatmeal for breakfast, you might be wondering if your dog can join in, too.

Oatmeal is the name given to prepared oats, which have been hulled then rolled, ground or milled. In the USA, oatmeal may also refer to the cooked porridge made with oats. It’s a healthy grain, known for leaving people feeling fuller for longer and reducing cholesterol.

Oatmeal is generally safe for dogs to eat. In fact, it is a very commonly fed additive, and is included in lots of dog foods and cat foods. Most dogs can eat oatmeal without having any adverse effects, assuming it’s in the correct quantities. It is a good source of fiber, making it good for the gut, and it’s also present in many foods designed for sensitive tummies due to its gentle nature.

Of course, even vegetables like ginger can cause problems for a few dogs, and oatmeal is no exception. Dogs that are allergic to oats will struggle to digest oatmeal, resulting in bad stomachs or skin problems.

In addition, feeding too much oatmeal can cause problems for your dog- it can throw their diet off balance, and too much fiber going through the body can cause tummy upsets. Most dogs will be fine eating a small amount of oatmeal every now and again.

Is Oatmeal Good For Dogs?

Oatmeal has many nutritional benefits. It is a good source of fiber and can be used as an energy source due to its carbohydrate levels. It is also high in protein, especially in comparison to other grains.

The USDA report that oats contain (per 100g raw oats):

The calories in oatmeal come from a combination of starch and fiber, with much of the starch being slow to break down. This means it helps to feed the good bacteria in your dog’s gut.

At nearly 17g per 100g, oats are higher in protein than most grains. This makes them particularly well suited for dogs, who need higher amounts of protein in their diets than humans do. Protein is important for muscular growth, energy and many bodily functions.

Oatmeal is very low in sugar, providing energy in the form of digestible starch. This is slower to break down, causing fewer sugar spikes and sugar lows, and requiring less need for insulin. This ‘slow release’ energy is much better for both humans and dogs. Sweet potatoes are an example of another good slow-release energy carbohydrate that your dog can consume.

Oatmeal contains a surprisingly large amount of fat, but it’s not too much; dogs need a lot more fat in their diets than humans do. Fat is essential to many body functions- it feeds the heart and the brain far better than starch does.

Vitamins and minerals in oatmeal

Is Oatmeal Used in Dog Food?

Absolutely! A quick search on Chewy.com shows that oatmeal is a common ingredient in dog food, appearing in over 250 products, with 229 products being dry diets and 30 products being wet diets. It’s actually named as a major ingredient in several diets, most commonly paired with lamb or chicken. Wellness is a well-known brand that uses oatmeal in several recipes. Other brands that use oatmeal in their food formulas include Nutro or Chewy’s brand American Journey. Most less expensive formulas rely on other forms of grain as their carbohydrate source.

Many of these are marketed for sensitive skin or stomach, as dogs are less likely to have problems with oats than wheat. Foods that are designed for dogs on a diet also frequently contain oatmeal; its high fiber content means it is filling. In fact, in a study on humans ranking the fullness after eating certain foods, oatmeal came in third overall, making it an excellent addition to a weight-loss diet.

Best Types of Oatmeal For Dogs

If you’ve decided that you want to give your dog a little bit of oatmeal every now and again, then it’s worth considering the type of oatmeal you have available. It’s not recommended that you give your dog flavored or pre-mixed oatmeal, as the flavorings or extra ingredients may not be safe for your pup.

They may also contain high levels of sugar, counteracting the health benefits of the oatmeal. Plain, unflavored oatmeal is best. Oatmeal also comes in the ‘quick cook’ or the larger grains.  Both are fine for dogs. The more ‘whole’ the ingredients, the more likely that the beneficial ingredients haven’t been lost during processing.

Oatmeal For Dogs With Medical Problems

Some people report that constipated dogs improve on oatmeal. This might be true for dogs with mild constipation, but for those with severe constipation, oatmeal isn’t going to be enough to get those bowels moving again. Typically this gets treated with a very bland diet which will include starchy carbohydrates and other proteins like cooked eggs.

When making oatmeal for dogs, you should avoid the premixed and pre-flavored oatmeal as these often contain added sugar and may even have dangerous ingredients such as nuts, raisins, or xylitol.

You can add your own flavorings if you like, but you should leave out any ingredients except those you know to be safe. You should also make the oatmeal with water rather than milk, which can cause problems; many dogs struggle to digest lactose and eating too much can cause vomiting, diarrhea and bad gas.

Put an ounce or two of dried oatmeal into a microwave bowl, and add three ounces of water. Cook in the microwave for around two minutes. Once it’s done, give it a good stir and let it cool completely before you give it to your dog. We recommend it as a dog food topper for the best experience for your pup.

How Much Can My Dog Eat?

Giving your dog too much oatmeal can cause problems for a number of reasons. Firstly, more fiber doesn’t necessarily equal better- too much fiber can cause as many problems as too little. Secondly, your dog should already be on a perfectly balanced diet, and the addition of extra nutrients can unbalance this.

For instance, if fed in large enough amounts for long enough, the extra phosphorus in the oatmeal can cause an unbalance of the calcium in the body. This can lead to bone problems. Lastly, if you’re giving the oatmeal to your dog in addition to their usual diet, they are likely to become overweight. This can cause further serious health concerns, and require you to put your dog on low-calorie dog food.

You should never give your dog more than a tenth of their daily calorie allowance in treats, to make sure that you don’t unbalance their diet. For example, for a 40lb dog of ideal weight, a daily calorie intake of 860 calories is about right. They can have up to 86 of these calories as treats, chews, and other differences from their usual diet. If this is going to be in the form of oatmeal, they can have up to four ounces of cooked oatmeal each day.

Of course, four ounces might be too much fiber for your dog. For this reason, it’s best to start with a tablespoon of cooked oatmeal, and assess their response, before giving them any more.

While it’s possible for your dog to have small bits of oatmeal worked into their diet on a daily basis, we recommend looking at other healthy snacks too. Avoid processed foods like Graham Crackers or table scraps from boxed dinners. Focus on high-quality fruits for sweet treats, like cubed pineapple treats, or sliced kiwi.

We get a lot of questions here about what your dog can and cannot eat. We’ve compiled some commonly asked questions about pups and oatmeal for you below.

For the most part, oatmeal should be safe for your pup. We always recommend that you test in smaller quantities to make sure that your dog doesn’t have any adverse reactions. While this is generally not an issue for most dogs, you’ll want to act quickly if it becomes a problem.

If you feel something isn’t right, the first thing you should do is always contact your veterinarian right away. With all that being said, yes, your dog can eat oatmeal, and there are many benefits if they do!

Can Dogs Eat Garlic? How Much Garlic is Toxic For Dogs?

My Dog Just Ate Chapstick or Lip Balm! Now What Should I Do?