Can Dogs Eat Ham? Is Ham Good Or Bad For Dogs?

Are you thinking of giving your pup some leftover ham from last night's dinner? Or perhaps a few slices of lunchmeat while making your sandwich? Veterinarian Joanna Woodnutt evaluates whether ham is safe for dogs in moderation. 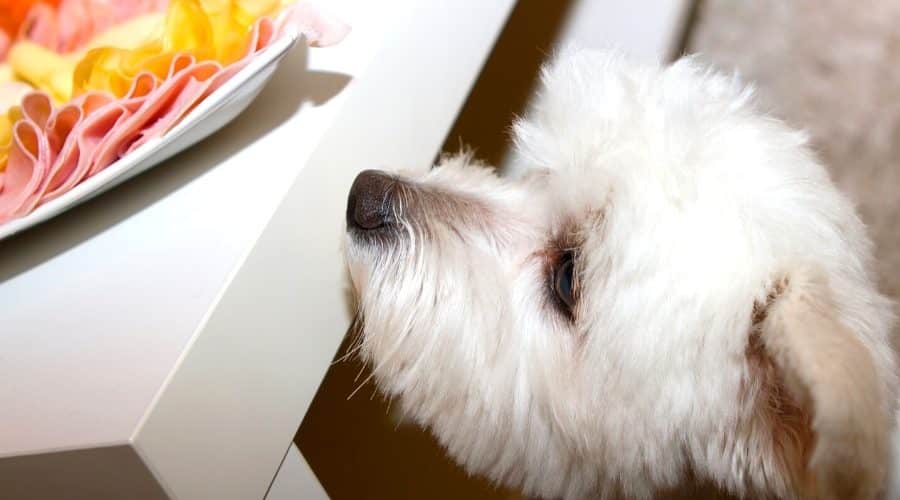 This article was written by a veterinarian, but it should not substitute as contact with a trained professional. If your dog ate ham and is reacting adversely, contact your local veterinarian immediately.

Can dogs eat ham? If it’s a holiday in the US, and you are serving your family this tasty family tradition, it’s only common to ask if you might be able to give your dog some scraps. Or, perhaps you are making yourself a sandwich, and want to give your pup a few slices of smoked ham?

Whatever the reason you are here, there’s no denying that ham is delicious! In fact, it’s just as delicious to your pup as bacon, even when uncooked! Ham is loaded with sodium, so it’s not always the best snack for your pup, especially on a regular basis.

There are a few things you’ll want to be aware of before feeding too much of this meat to your pup. In the article below, we examine if it’s safe to feed this to your canine companion. We’ll also look at how much is OK to feed Fido as a quick treat. Let’s jump in!

Where Does Ham Come From?

Ham is a popular food item that can be enjoyed in many ways. This meat comes from the hind leg of a pig that can be cooked on or off the bone. It can be prepared as a large joint of meat often for celebrations or roast dinners, or it can be cut into slices deli-style for sandwiches.

Ham is sometimes cured or prepared before cooking. This means the meat might be treated with brine, salt, or sugar, or chemicals such as sodium nitrate might be added before cooking. There is a large range of different ways in which ham might be prepared or cooked, and this has an impact on the suitability of ham as a food item for canines.

Is Ham Okay For Dogs To Eat?

When you are cooking or enjoying ham at home you might wonder if it’s ok to give a little to your four-legged friend. However, before you give them any new snack, you should make sure it’s safe.

Ham is a source of protein, and dogs do need protein in their diet; however, there are better sources of protein than ham we could give. Similar to other cold cuts, ham is often cured and contains a high proportion of salt. This is not good for most dogs. Ham is also high-fat meat, meaning it can trigger painful pancreatitis in some dogs.

Ham shouldn’t form a large portion of your dog’s diet. However, if Fido tolerates it, then it can be offered as an occasional treat. Some owners use ham as a small high-value reward when training their dog. It shouldn’t be used as a regular part of their meal. In most cases, there are far better sources of protein with many more nutritional benefits.

On the whole, ham is best left for humans to enjoy to avoid any unintended consequences.

Why Is Ham Bad For Dogs?

Although it provides a source of protein, ham is not the most balanced human food item that could be offered to your canine companion. If eaten in large quantities, it can do more harm than good. While very small amounts will be ok for most dogs, large amounts will cause problems. This is especially true if your pup has a sensitive stomach.

Ham is often cured, frequently with salt or other sodium-containing compounds. Salt is not good for your dog, especially in large amounts. If enough ham is eaten, there is a risk of salt toxicity. Initially, this can be seen as increased thirst and urination. Some pups even benefit from low-sodium dog food.

However, in more serious cases, symptoms such as vomiting, diarrhea, tremors, or seizures could be seen. If you suspect a large amount of salty ham was consumed, you should contact your vet for advice.

Ham is high-fat meat, which is what makes it so appealing both to humans and our canine companions. In small quantities, it may not cause too much of a problem. However, some dogs will be very sensitive to this fatty meat.

It is not uncommon for dogs to have digestive upsets after eating ham. Your pup may experience vomiting or diarrhea, which can prove to be very problematic in some cases. Vomiting and diarrhea may cause your pet to feel sick and subdued. Significant gastric upset can cause dehydration in dogs.

Besides, some dogs are prone to pancreatitis, a painful condition where the pancreas reacts to excessive fats and becomes inflamed. This can also cause vomiting, and many dogs will need to be hospitalized for pain relief and fluids. Although this is a rare consequence of eating ham, dogs with confirmed chronic pancreatitis need a low-fat diet to prevent flare-ups, and therefore shouldn’t be fed ham.

Lastly, the fat content means that ham is high in calories. With over 50% of pets in the UK and US overweight, calorie restriction is essential. Although ham is tasty, the calories are ‘empty’- they have little nutritional value whilst using up their calorie allowance. Avoiding human foods such as ham, especially in overweight dogs, is one way to keep dogs at a healthy weight.

Ham is often cooked on the bone. When cooked, ham bones soften, making them a high-risk bone to feed your dog. This is because when chewed, the cooked bone is much more likely to splinter, which can cause damage to the mouth and the gut. (As a side note, raw ham bones are not recommended by vets either, as they can carry bacteria and damage the teeth!)

What Happens if a Dog Eats Ham?

If a dog eats a small amount of ham it is very unlikely to experience any untoward effects. Of course, what causes a problem for one dog may be different for another, and some dogs will not tolerate eating ham at all.

The most common problem that might be seen in a dog that has eaten ham is digestive upsets such as excessive drooling, vomiting, or diarrhea. Vomiting or diarrhea may be mild and short-lived or could be protracted and make your pup very sick.

If you see signs of gut upset after eating ham it is best to seek advice from your vet regarding the best course of action. If vomiting has been significant, there is a risk of dehydration. This may trigger a need to be admitted for an IV drip to replace lost fluids.

In some cases, eating fatty ham can lead to a painful condition known as pancreatitis. This is inflammation of the pancreas which causes severe pain and vomiting. If your dog has pancreatitis, you might notice him lying or stretching awkwardly because of the pain he is experiencing. Appetite is likely to reduce, and you may see that your pup has lost weight.

Pancreatitis is a serious condition. If you suspect Pancreatitis, then it’s best to get your pup assessed by your local veterinarian. Treatment for pancreatitis is likely to include pain relief, a bland diet, and anti-sickness medication. However, in more serious cases, a stay in the hospital might be needed for more intensive treatment such as fluids.

Is Any Ham Safe For Dogs?

Ham is generally cured or cooked in such a way to make it a less than suitable food or treat. Ham is very fatty meat by nature. Although it is a source of protein, there are many more nutritious options available. Eating ham may lead to unwanted effects such as gut upsets, and so as a general rule it is best to only feed it to your pup in moderation.

If you want to feed ham safely to your dog, stick to a very tiny amount- half an inch, cubed, or less for dogs under 15lb. Don’t feed it more often than every few days and stop if you notice any adverse reaction. Try to choose a high-quality ham that has had minimal processing and soak it in water for half an hour to draw out the excess salt.

Ham hocks are not a safe snack for your dog due to the bones. The cooking process softens the bone, which is more likely to splinter-this can cause damage to your pet’s mouth, or guts.

Bowel obstruction from bones is a common occurrence, and the pieces can be so sharp they pierce the gut. This can quickly lead to a potentially life-threatening situation. It is best to avoid feeding your dog ham hocks.

Can ham give dogs diarrhea?

Ham is fatty meat that is very rich, so it can cause diarrhea in some dogs. The high-fat content of the meat can cause pancreatitis, which can lead to diarrhea. If you have fed your dog ham and he is now experiencing diarrhea, you should seek advice from your veterinary surgeon.

Hambones soften when cooked and then splinter. This poses a danger to a dog who could injure their mouths or gut. Sharp splinters of bone have the potential to pierce the gut and could lead to serious potentially fatal infections.

Uncooked bones are not recommended either. This is because they can harbor harmful bacteria or cause damage to the teeth when chewed by a dog. It is best to avoid giving all bones to dogs, particularly cooked bones.

While it may be tempting to feed your offcuts to your dog when you remove them, it’s not a good idea to feed your dog ham fat or ham rind. These are the fattiest parts of the ham and contain no nutritional benefit while being the highest risk for your dog.

Ham is very popular and can be quite a tasty meat for both humans and canines alike. Most dogs will happily eat it! However, it is best not to feed it to your dog regularly. This is because it is cooked or cured with salt or other chemicals which are not suitable for canine consumption.

The high salt and fat content means dogs are at risk of salt poisoning, vomiting, and diarrhea. In some dogs eating this high-fat food could lead to a more serious condition called pancreatitis.

There are much safer and more nutritious sources of protein that would be better options to offer to your pet. However, a tiny inch-square piece of ham wrapped around a pill is unlikely to cause any significant problems for most dogs.

Can Dogs Eat Turkey? Is It Bad For Dogs?

My Dog Ate Coffee Grounds! What Should I Do Next?

My Dog Just Ate a Whole Banana Peel! What Should I Do?