Can Dogs Eat Salami? Is Salami Good or Bad For Dogs?

Thinking of feeding Fido some salami while you make a sandwich for yourself or someine in your family? Maybe your dog swiped some off the counter while you weren't looking? Veterinarian Joanna Woodnutt examines if Salami is safe for dogs to eat, and in what quantities. 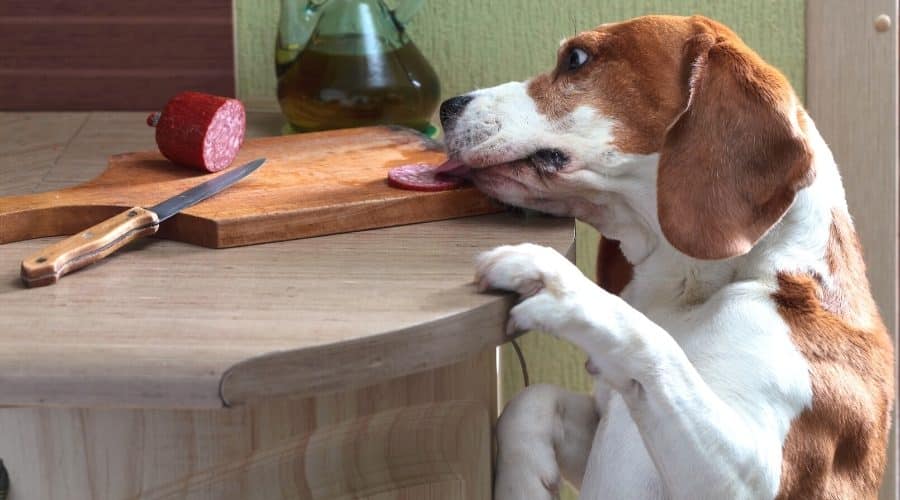 This article was written by a veterinarian, but it should not substitute as contact with a trained professional. If your dog ate salami and is reacting adversely, contact your local veterinarian immediately.

If you’re eating salami right now, I bet your furry friend isn’t too far away. Your dog’s natural ability to guilt-trip you into saving them part of your lunch may be the reason why you have asked, “can dogs eat salami?”

Whatever the reason, it’s good to check what is safe to feed our pups since they can’t always eat what we can. While a small piece of salami might not harm your dog, there is always a chance that human food can make them sick.

While dogs can eat many other types of meat, it’s important to understand what’s healthy for them and what’s not. So, what are the risks if you give salami to your pup? And are there any benefits? Let’s find out.

Salami is a cured sausage made with meat (traditionally pork or beef, but you can find lots of different types). In most cases, the curing process involves fermentation and drying, which preserves and flavors the product, making it ready to eat without cooking.

Other popular variations of salami include chorizo and pepperoni. The main differences between the sausages are the ingredients used to flavor the meat, often influenced by their country of origin.

What’s Salami Made Of?

The basic ingredients of a traditional salami sausage are:

Other additives, like nitrites and bacterial cultures, are used for curing meat. Once it’s ready to eat, salami is used in various ways—antipasti, sandwiches, pizzas, and lots of other tasty dishes.

Salami isn’t poisonous to your pup. A small amount might be ok, but they shouldn’t be given more than one small slice. This could still be too much for little dogs, so you have to be really careful! Every dog will react differently, and those with sensitive stomachs might not be so lucky. We’ll talk about the bad things that can happen when a dog eats salami later, but let’s see if there are any good reasons to give your pooch salami.

Most dogs won’t refuse salami if it’s offered to them, which can have its advantages! Your pup may do anything to get a taste of that salami, making it a foolproof training aid. But, if given too often, it can make Fido sick.

Healthier training treats, like small pieces of cooked chicken, fruit (banana or apple flesh), or even pieces of their own kibble, are a great alternative. Always check with your veterinarian that what you are giving your dog is safe for them to eat.

Puppies can have very sensitive guts, so you have to be extra careful what you feed them. Don’t feed intense flavors like salami to your pup; choose lighter treats instead.

As a pet parent, there is little more anxiety-inducing than if your pup won’t eat. A dog that isn’t eating well might need to be tempted with something tasty, like salami.

But the reason for their poor appetite might be that they have already eaten something dodgy, so feeding them food that is high in salt and fat could make them feel worse. If your pup is sick and not eating, you’re best calling the veterinarian for advice.

Just like ham or other cold cuts, salami contains high amounts of protein and sodium. Dogs need both as part of a balanced diet, just not in excess. Protein helps build and repair muscle, tendons, and ligaments, keeps their skin and coat healthy, and supports a healthy immune system.

Sodium (salt) keeps your dog’s nervous system and muscles healthy, as well as helping to control fluid balance. Salami also has a modest amount of other vitamins and minerals that your pup needs.

Some types of salami have olive oil in place of the fat, making it a bit healthier. So, is there a chance salami might actually be good for our canine friends? Before we make up our minds, let’s talk about why salami is bad for dogs.

When is Salami Bad For Dogs?

We’ve seen how salami could benefit your pup, but there are risks too. Is feeding your pup salami worth it? Probably not. Most dogs will be completely fine after eating salami, but these are just some of the problems you might face.

Half of the ingredients used to make traditional salami could make our precious pups poorly. They might get sick soon after eating it, or, if given often, they can become generally unhealthy. We’re mostly talking about salt, spices, and fat.

Salami has lots of fat in it (18%–78% depending on the type of sausage), and too much fat is bad for your pooch. When your dog eats food with a lot of fat in it, the pancreas can become inflamed—called pancreatitis.

It’s a painful condition and really distressing for pet parents as their pups can also have vomiting, diarrhea, fever, and no appetite. Some dogs, if they become very unwell, can die from pancreatitis. If your pup has had pancreatitis before, they will be at an even greater risk of becoming very sick.

Give your dog too much fat regularly, and they can get overweight. It’s not good for their heart, blood pressure, or joints to be too heavy. They can also have a higher chance of getting certain cancers if they’re fat.

Though our pups need salt to stay healthy, too much is harmful. If given in high amounts, salt can cause high blood pressure, kidney damage, or salt poisoning. Dogs with salt poisoning have symptoms of thirst, disorientation, vomiting, diarrhea, seizures, and death in the worst case.

Spices, like paprika or chili, give salami its delicious taste. But they’re pretty potent for most dogs to handle—they can get a tummy upset (vomiting, diarrhea, or gas) and no one wants that, especially your pup. Some spice mixtures also include onion which can be toxic to dogs in certain amounts.

Garlic can be toxic to dogs if they eat lots of it. It can cause anemia—where your pup doesn’t have enough red blood cells. Red blood cells carry oxygen around their body, which is essential for life. Anemia can kill a dog if it’s severe.

Bacteria, like E.coli, Listeria, Salmonella, and fungi, can contaminate the sausage at any point when it’s being made or when it’s being stored. Usually, these germs would be killed by cooking, but since cured meats are prepared as “ready to eat” without heating, they can be a higher risk to whoever eats them. The fermentation and drying process is supposed to preserve the meat by curing, but it’s not foolproof.

There is another possible contaminant, like toxoplasma (a parasite), that our pooches can get if they eat infected meat. Dogs with Toxoplasma infection may be off their food, lethargic, have diarrhea, a high temperature, cough, weakness, and seizures.

Not all products will be contaminated. Agencies that monitor food standards have rules to limit the risk to humans (and secondarily our pets if we decide to feed them human food!).

If your dog has pinched a small piece of salami, hopefully, there is nothing to worry about; you can keep a close eye on them. Most pups, if they do get sick, might have vomiting, diarrhea, or gas. While this will be unpleasant, it can get better on its own if it’s mild.

A dog who has a sensitive gut, or has had pancreatitis before, can become especially poorly after eating foods high in fat. If you are worried, don’t hesitate to call your veterinarian for advice. Salami is not the best snack choice for most canines, even if they think otherwise! The possible harm we can cause by giving them salami outweighs any benefits.

So if you can avoid feeding your pup salami, you’ll be protecting your pup the best way you can. Your dog might be one of the unlucky ones that salami doesn’t agree with. No pet parent wants a sick pooch. Instead, choose treats that you know are healthy for dogs, or ask your veterinarian if you’re not sure what your best options are.

Can Dogs Eat Mushrooms? Are Mushrooms Safe For Dogs?

Yikes! My Dog Just Ate My Donuts! What Should I Do Now?

What Can Dogs Eat When They Are Constipated? Six Common Remedies

Can Dogs Eat Cheese? Is Cheese Safe or Healthy For Dogs to Eat Regularly?