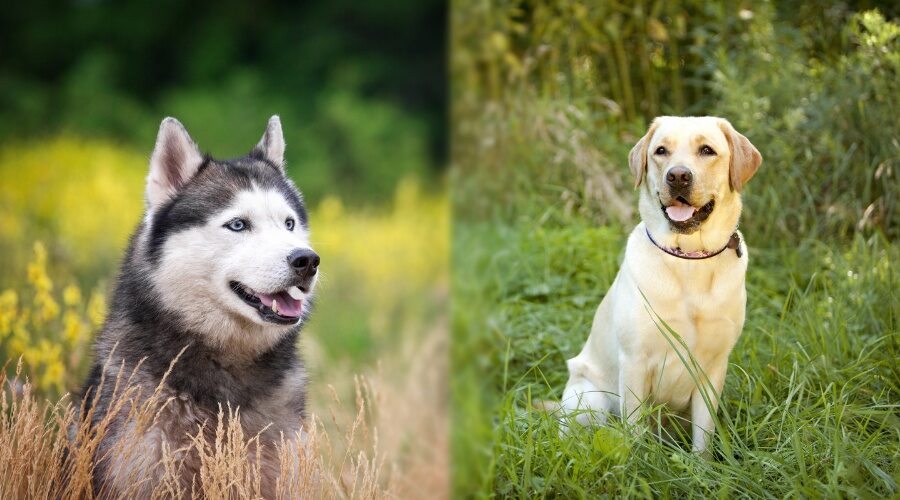 When it comes to looking for a dog many people often ask, which breed is the better dog, but in most cases no one dog is better than any other, it is simply a question of which dog is better for you and your lifestyle.

The Siberian Husky and the Labrador Retriever are both energetic dogs, but they prefer different types of exercise. They also have different energy levels in the home, with the Husky being more hyper and the Labrador much calmer.

The best way to decide which breed is better for your family is to look at your circumstances and lifestyle, and then decide which one will slot better into your current situation. Because, ultimately, a dog should fit in with your lifestyle, not the other way round. So, without further ado, let’s look at the factors that might affect whether the Siberian Husky or the Labrador Retriever is the better dog breed for you.

What Will Your Dog Do?

A great place to start is to answer why you want a dog, and usually you can then identify what group of dog will suit you and your family best. The American Kennel Club (AKC) has 7 specific categories of dog groups, most of which serve a certain purpose.

The Siberian Husky falls into the working group, whose purpose was to assist their master with pulling sleds across the Arctic. The Labrador Retriever falls into the sporting group, whose purpose was to assist his master in hunting or catching their prey. Both of these guys are known to be great family pets, but the most important thing to know about them is if you are not going to be using either the Husky or the Labrador for these purposes, these guys will have a ton of energy which you must be able to invest a significant amount of time into each and every day to exercise them. If this is something you can give them, then read on! If not, then you should maybe consider a dog from the toy group or non-sporting group.

The Husky is the original race car, and he is built for pulling sleds as fast as he can for as long as he can. So, this guy would appreciate long brisk walks, or jogging, for an hour and a half most days. Of course, you can mix this up with a round of fetch in the local park, but you would do well to remember his original purpose, as this is what will keep him most happy.

The Labrador is a hunting dog, who retrieves prey from the water. So, the ideal exercise for this guy would be to play fetch or ball in the local park where there are fields and lakes. Not only will this keep him physically fit, but it will also keep him mentally stimulated as this is his favourite pastime.

If you don’t exercise these guys appropriately they will become destructive. Don’t be fooled by their puppy dog eyes, the Labrador is known to eat through sofas, and the Husky is known to dig gardens up and jump 6-foot fences with ease. If you want a happy pup, then exercise and energy outlets are key for these guys!

The lab and the husky have completely different looks.

The husky was bred for working, sledding and has a thick coat to handle the snow.  They also require more grooming, and shed more due to the amount of fur they have.  If you live in a warmer climate, having a husky may not be the best choice due to their long coat.  They are often compared to Alaskan Malamutes and even mistaken for wolves.  If long hair bothers you, this makes the breed an easy pass for your family.

The lab was bred for sport.  There are field and bench labs, which both  have slightly different purposes.  They can have many different colored coats, including a red coat which is technically a deeper yellow, and there are also the controversial silver labs.  They do not shed as much as a husky and are known to be just fine in warmer climates.

Which is Easier to Train?

The Siberian Husky and the Labrador are very intelligent pups and they love to be trained by their master. They both require early socialisation and they both respond well to positive reinforcement training. They are both used in working professions, such as search and rescue and drug detection and this is a testament to their incredible intelligence. The Labrador is more known as an assistance dog for the blind, as well as being therapy dogs, as he has a calmer temperament than the Husky.

However, the Husky is known to be more independent and stubborn, and as such he is slightly harder to train than the Labrador. Additionally, as he originally comes from a pack setting, he needs a dominant pack leader, if he feels as though there is no hierarchy in the family unit, then he may try to assume the role of top dog. This will not only create behavioural issues, but it will also cause an unhappy household. As long as his main caregiver is dominant and firm with him, he will thrive and be an awesome family pet, but he is definitely not for the meek and mild owner.  They also need toys to keep them busy, or they can get into trouble.

Overall, they are both very intelligent and trainable and will thrive is almost any training event that you enter them into, however, if you are a first-time dog owner, or you don’t think you can be an authoritative pack leader then the Labrador will probably be the better breed for you.

Which Breed is Better with Kids?

The Siberian Husky and the Labrador differ slightly in their temperament and as such this could determine what breed is better for your family. The Husky is hyperactive, he is always on the go and is always running and bouncing around. This may not be ideal if you have younger children. Whereas the Labrador is much gentler and calmer and will lay down with young children whilst they are watching a film or having a snooze.

Overall, Huskies do not have an exercise limit, they are hyperactive, and their energy knows no bounds. Whereas the Labrador, whilst he needs a good hour of exercising every day, is more partial to a snooze in between play sessions. They both get along well with children of all ages and other animals, just be sure to teach your child how to behave around him, and to be aware of their medium to large size.

Which Breed is Healthier?

Both the Husky and the Labrador are generally healthy pups who are both prone to suffering breed specific health issues.

Whilst their health is what it is, and you haven’t got a crystal ball to predict what is in store for them, it is of course sad for children to have to watch their best friend become ill. So, their health is definitely something that should be scrutinised on a higher level if you have children. Whilst they are both generally healthy pups, the Husky has less major health complaints, and is the more robust roomie who, on average, lives 2 years longer than the Labrador.

Both the Siberian Husky and Labrador have a double coat that is thick. As such, they are both heavy shedders; during shedding season they will need brushing every day to keep their coat manageable. Husky fur may be easier to notice due to the fact that most have some form of white fur that sheds frequently.

It is believed that around 10% of the American population suffers from dog allergies, and whilst there aren’t any 100% hypoallergenic dogs, there are breeds that shed a lot less, and therefore much better for allergy sufferers. So, if your family has dog allergies, then you should consider another breed as both the Husky and the Labrador will get you sneezing!

The price of a Siberian Husky and the Labrador cost about the same in terms of the initial price of the pooch, with $1,000 being the average cost of a puppy from a reputable buyer. They both eat around 3 cups of food a day, and they are both generally healthy pups, so their insurance and medical bills will not vary significantly in price. Their diets due differ due to their coats. Labs should eat dog food heavy in Omega 3’s to support their skin and coat health, but you’ll need to watch their calorie intake. A Husky’s dog food should support a working dog that’s very active.

As long as you purchase him from a recognised breeder, the pups are almost likely to be guaranteed to have had the best start to life, and that they have already shown that they have the temperament that they should. A reputable breeder should never sell a puppy who is ill or has displayed vicious or aggressive tendencies. This is particularly important if you are a family that have young children or other pets in your household.

Alternatively, if either of these breeds sound like they could slot into your life perfectly and you still can’t decide between the two, then why not take a look at the Huskador, he is a cross between a Siberian Husky and a Labrador Retriever, and this pup is the best of both worlds!

So, Which is Better For Your Family?

Despite the Labrador being the most popular pup of the two, it really comes down to which breed better suits you and your lifestyle better. Whilst the Labrador appears to be the better choice for a family pet as shown by popularity rankings, if you can offer the Husky what he needs in terms of input and effort, then he is known to be as equally rewarding and great as a family pet.

The Siberian Husky will entertain your whole family with his talkative vocal nature. If you are an energetic family them his athleticism and feats of endurance and strength will keep you company for the long journey. And whilst he is more difficult to train, if you can crack his training his unwavering loyalty and protectiveness will make up for this slight difficulty. Not to mention, if your family are a bit different, or a bit quirky, then this guy is definitely not the most common family dog.

However, yes it is true that the Labrador is America’s favorite family pet, and there are plenty of reasons why this is. He is gentle and calm, but at the same time he will offer you hours of entertainment and cuddles.

We’d declare the labrador the winner if you don’t want to groom your pup regularly and shedding bothers you, but a husky can be just as equally awesome if you don’t mind the shedding and exercise requirements that this breed truly needs.