My Dog Just Ate Styrofoam! What Should I Do Now?

Did your dog just swallow a bunch of packing peanuts, or styrofoam packaging while your back was turned? Veterinarian Ellen Marcinkiewicz outlines your next steps. 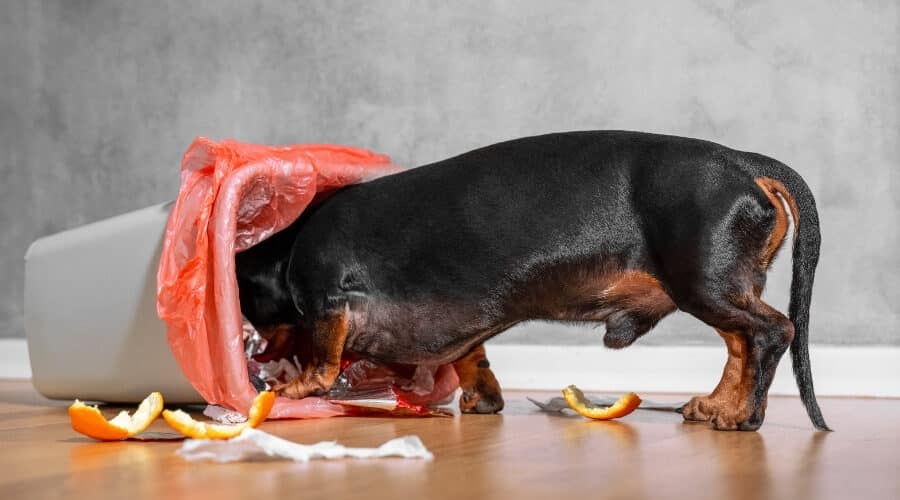 This article was written by a veterinarian, but it should not substitute as in-person contact with a trained professional. If your dog ate Styrofoam, contact your local veterinarian.

If you’ve got a pup that’s currently chewing up everything in sight, it’s sometimes hard to know what’s dangerous. It’s also difficult to know what isn’t. If your pup got into last night’s dinner, depending on what they ate, you may be in for a trip to the vet. But what happens when they eat the styrofoam container that dinner was saved in?

Styrofoam is man-made, and obviously can be a cause for concern if your pup’s decided to eat some. There are plenty of natural foods that can be toxic to dogs, so it shouldn’t come as a surprise that styrofoam is also not good for your four-legged friend.

In this article, we discuss everything you need to know about dogs and Styrofoam. This common material is used in everything from meat trays and coffee cups, to bean bags and packing peanuts. Unfortunately, it can be a real health hazard if eaten by your pup, so let’s find out what to do next if your dog just ate some.

Is Styrofoam Toxic For Dogs?

The short answer is that most styrofoam doesn’t contain chemicals that are outright toxic to dogs. But that doesn’t mean it’s not dangerous. The outcome will largely depend on how much was eaten, and your pup’s weight. Some dogs may pass styrofoam with no concern, but others may not respond the same way.

Styrofoam was originally a trademarked name for a type of insulation used in construction. It’s now commonly used to describe products made of the same type of plastic called polystyrene. Polystyrene or Styrofoam plastic products include packing peanuts, takeaway coffee cups, meat trays, bean bag beads, packaging, food containers, and the filling of some soft toys.

While the chemicals in Styrofoam products may cause mild irritation to the mouth and gut, it is otherwise unlikely to have any major toxic effects. The real danger is that they cannot be digested. This means it carries a risk of causing a blockage in your dog’s gut (intestinal obstruction). It is also a potential choking hazard.

A small amount of polystyrene is usually not a cause for concern. Especially if chewed up into small pieces or eaten by a large breed dog. These pieces may simply pass through the gut with no major concerns. However, it’s always best to seek professional veterinary advice if your dog ingested Styrofoam.

My Dog Ate Styrofoam: What Should I Do?

If your dog just ate some packing peanuts or last night’s leftovers in a styrofoam container, there are some steps you’ll want to take quickly with your pup. Follow these steps as soon as you’ve identified that your canine companion ate Styrofoam when they weren’t looking.

If your dog appears to be choking or is having difficulty breathing take them immediately to the nearest emergency vet. Signs of breathing difficulty include breathing harder and faster than normal, gasping for breath, and pale or blue-tinged gums (normal gum color is a bright salmon pink for dogs). Check to see if your pup has vomited, had diarrhea, or is showing any other signs that they might be unwell.

Clean-Up & Put Your Dog Away

Before you start cleaning up any excess styrofoam or inedible packaging items, you’ll want to place your dog somewhere safe. We recommend putting your pup somewhere you can keep your eye on them while you quickly clean up. You should then call your veterinarian. This way Fido won’t be able to ingest more of the foreign substance while you work to contact your vet.

Based on the information you give them, your vet will be able to advise you on the next steps. This might be bringing your pup into the clinic for an examination, further diagnostic tests, and treatment, or it might be simply monitoring your dog at home if your vet thinks the Styrofoam is likely to pass. Make sure to follow all of your vet’s instructions carefully and let them know if you have any concerns.

Quickly gather some information before you call the vet. See if you can work out how much was eaten and when, or your best estimate of this. If your pup ate packing peanuts, were they biodegradable corn starch or traditional polystyrene? Did your pup eat any food left within a Styrofoam container? Did they chew up the Styrofoam into little pieces before swallowing?

The decision to induce vomiting should only be made by your vet and never be attempted at home. The piece of Styrofoam might be too large and risk getting lodged in your dog’s esophagus. Alternatively, your dog might bring the polystyrene up then breathe it in while heaving, causing them to choke.

If your vet needs to make your pup vomit, they will be able to do so as safely as possible. Most home remedies are also directly irritant to the stomach (that’s how they work) and can cause more harm than good.

What Happens if My Dog Eats Styrofoam?

Similar to other undigestible items, smaller amounts of Styrofoam are likely to pass through the gut of a large breed dog with no major issues. You might see pieces coming through in their feces over the next couple of days as it leaves the body.

The risk of intestinal blockage is much higher for small breed dogs and puppies, or if a large amount was eaten. However, it isn’t always easy to predict just how an inedible object will pass through the gut and you will need to monitor your pet closely.

Unfortunately, dogs are known for eating things they shouldn’t. One of the side effects can be an upset tummy (gastroenteritis). This might be present as diarrhea, vomiting, or being less interested in their food. If any food was eaten along with the Styrofoam container it’s important to let your vet know. This is important because many foods that are safe for us to eat can be toxic to dogs.

This includes chocolate, grapes, onions, garlic, macadamia nuts, coffee, and alcohol. Highly fatty foods can also cause pancreatitis (inflammation of the pancreas and associated illness). This is an extremely painful condition, requiring veterinary attention and treatment.

Some of the signs of gastroenteritis are the same as those seen with intestinal obstruction. This is especially prevalent in the early stages, which is why it’s vital to seek professional veterinary advice if your dog is showing any signs of illness.

Styrofoam is indigestible. However, it still needs to pass through the gut to be eliminated from the body. If larger pieces are unable to fit through the narrower points such as the small intestine, a blockage will form. This is known as an intestinal obstruction.

Blockages are also common in the stomach and are life-threatening if left untreated. Signs commonly seen with an obstruction are vomiting (usually multiple times), struggling to keep down food and water, constipation (or diarrhea), not wanting to eat, and lethargy.

If your dog is showing any of these signs you need to seek urgent veterinary attention. Your vet will examine your dog and likely perform some diagnostic tests such as blood tests, x-rays, or an abdominal ultrasound. If a blockage is identified, surgery is usually required to remove it- most dogs will then do well.

In some cases, a blockage can be removed using an endoscope (an instrument with a camera) under anesthesia. Either way, the sooner the blockage can be removed the better, as obstruction can lead to damage of the intestinal wall and leakage of gut contents into the abdomen (septic peritonitis) which is fatal if left untreated. Prolonged vomiting caused by a blockage also leads quickly to dehydration. This can make your pup extremely ill and is another reason to intervene as early as possible.

If pieces of Styrofoam are inhaled instead of swallowed, they can obstruct your dog’s airway causing them to choke. This is an emergency and requires urgent veterinary attention as your dog will struggle to breathe. The team will act quickly to administer oxygen and try to remove to obstruction to give your furry friend the best chance of survival.

As we now know the potential consequences of your dog eating Styrofoam are simply not worth the risk! Try to prevent access to Styrofoam wherever possible, especially for young puppies who are more likely to chew on inedible objects.

Take care when opening packages as packing peanuts may fall on the floor for your dog to grab. Also, consider the materials your dog’s toys and bedding are made from. Soft toys with a Styrofoam filling and bean bags or bedding that contains polystyrene should be avoided in case they are chewed up and swallowed.

Styrofoam is also common packaging for plants. If your dog ate some petunias you were meaning to plant in the garden, make sure they didn’t eat the packaging as well.

The trash can is also a common access point, as the smell of meat juice on a Styrofoam tray can be extremely tempting for dogs. Try using a pet secure trash can or keeping it safely secured away from your furry friends. When walking in public places, always keep them on a leash to avoid them picking up litter such as coffee cups or cupcake wrappers. Prevention is much better than cure!

Small amounts of Styrofoam may pass through your dog’s gut, especially if you have a large-breed dog. However, bowel obstruction is a severe and sometimes fatal consequence if enough Styrofoam is eaten. This is why it’s important that you react quickly in the event that it happens. If you notice your pup has eaten some Styrofoam, it’s best to call your vet for their advice to give you peace of mind.

Pig Ears For Dogs: Are They Safe or Dangerous For Your Pup?