Can Dogs Eat Popcorn? Is Popcorn Safe For Dogs To Eat, or is it Dangerous?

If you are looking at some different human food to add to your dog's diet to give them a little more variety, popcorn may be on your list. Veterinarian Joanna Woodnutt takes a look at if popcorn is safe to feed your dog, and if there are more nutrient-dense alternatives. 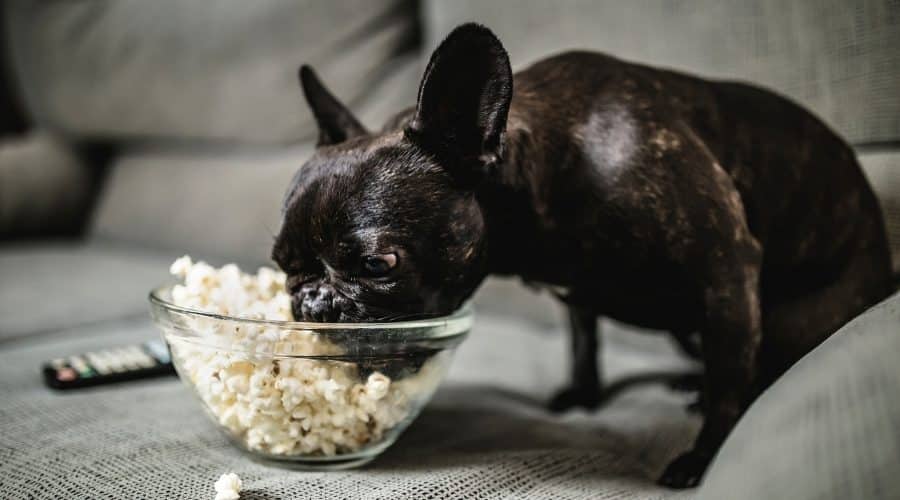 This article was written by a veterinarian, but it should not substitute as contact with a trained professional. If your dog ate popcorn and is reacting adversely, contact your local veterinarian immediately.

Popcorn is obviously a very popular snack food in cinemas and in our homes. It’s the classic accompaniment to a good movie! It is also now touted as a healthy snack, being fairly filling and satisfying but relatively low on calories (depending on your topping!). But what happens when your dog wants a few pieces? Is popcorn truly safe for dogs to eat?

The short answer is yes, generally speaking, popcorn is safe for most dogs. Where you can run into problems if your dog has too much at once, or if there are additives in the seasoning. And, yes, there are many other healthy options that you can choose to feed your canine companion as a snack.

Before you feed your pup some popcorn, there are a few questions that need answers. And if Fido decided to eat an entire bag of popcorn when you weren’t looking, there are a few steps you’ll need to take to make sure there’s minimal impact to their health.

Popcorn comes from corn kernels, which are the seed of the corn or maize plant. The varieties of corn that produce popcorn have a very tough shell and water-based starch inside. When the water in the starch heats up, it expands to the point where it bursts the shell and the starch cools rapidly to give popped corn.

A variety of toppings are usually available to put on or in your popcorn, including sweet, salt, butter, and flavored ones. Did you know that there is evidence from Mexico that people have known about popcorn for more than 5,000 years?

Is it Safe to Give Popcorn to My Dog?

Just like corn kernels, it is usually safe for a dog to eat plain, unflavored popcorn in moderation. It’s an entirely reasonable snack to share with a dog.

Popcorn is just starch, so it is not much different from feeding dogs rice, grains, or pasta, which are all safe for dogs by themselves (not seasoned). Dogs naturally are omnivores, meaning their digestive system can cope with a variety of foods. Starch is a typical plant-based carbohydrate, and so can be easily dealt with and absorbed by the canine digestive tract.

Basic unflavored popcorn can be a safe snack for the majority of dogs, including those with sensitive stomachs. It is low in fat (as long as only a reasonable amount of oil is used to make it), which is important for dogs that suffer from conditions like pancreatitis. There are some medical conditions where dogs should not be fed popcorn, but more on that later.

Popcorn provides carbohydrates (starch), an important part of an omnivore diet, whether human or dog! When eaten in moderation, it is a useful part of a varied, balanced diet.

The kernels also contain several important vitamins and minerals (magnesium and zinc, among others), which are an important part of a balanced diet.

How Do I Know Popcorn is Safe?

Many commercial dog foods already include corn or maize as their main source of carbohydrates. Typically, these corns are processed by milling or cooking first, just like popcorn, before being added to food.

This process is essential as whole grains are protected by that tough kernel, which is very hard for any digestive system to break down. Cooking and processing make the nutrients more accessible and improves the biological value of the food.

Commercial dog food companies invest a huge amount in research to ensure their products are safe and healthy, and corn forms a part of many brands around the world.

As with any food meant for humans, popcorn does have some risk. While most of these risks are fairly negligible from a health perspective, it’s still important to be aware of them. You also want to make sure you know what to do should your pup get sick after consumption. Let’s take a look at the risks.

Human and dog diets are best with a wide variety of foods in moderation. Popcorn is full of carbohydrates, and excess carbohydrates are converted to fat in the body.

In both species, excessive amounts can lead to weight gain and obesity and the problems that follow. In the same way as overweight people, dogs can suffer from diabetes, arthritis, as well as skin and heart problems.

Dogs with conditions like diabetes should not be fed popcorn or any other snacks. Proper control of diabetes in dogs relies on slow-release carbohydrates as part of regular, planned meals within a strict routine with exercise. Popcorn has higher amounts of fast-release carbs (starch) and so, cannot form part of this routine without destabilizing the dog.

Popcorn is often topped with lots of salt. Salt (Sodium chloride) has been shown in humans to be linked to high blood pressure and to heart disease. Dogs share these same risks.

Large amounts of salt in the short term can also cause dehydration. It can actually be poisonous by rapidly changing the salt concentration of the bloodstream. It is not unheard of for dogs to eat a large amount of salt very quickly to require hospitalization for intravenous fluids and rehydration.

The symptoms of Xylitol poisoning are vomiting, drooling, lethargy, weakness, difficulty walking, collapse, and seizures. If you suspect your canine companion has eaten Xylitol, then call your veterinary clinic for help immediately.

Butter and Oil Used in Cooking

Butter and large amounts of oil involved in popcorn can also be bad for dogs. High levels of fat have been associated with pancreatitis in dogs (inflammation of the pancreas), which causes severe pain and vomiting. Long term, butter and oil obviously contain a lot of fat which increases the risk of obesity.

The kernels of popcorn can get stuck in teeth and also pose a risk of choking, so keep a close eye on your dog when eating popcorn and avoid feeding kernels. This is more true of smaller breeds that have a smaller mouth, and smaller airway.

Overall, it is safe to feed your dog plain, unflavoured popcorn in small quantities. In fact, it may even have a few health benefits for canines. It contains carbohydrates, fiber, vitamins, and minerals, which are all important nutrients. However, large amounts of popcorn fed regularly can lead to obesity and its related health problems in the long term.

Be more cautious about flavored popcorn. Salt, butter, and artificial sweeteners can all be poisonous to dogs. Small amounts of salt and butter are unlikely to cause short-term problems but watch out for large quantities eaten in the short term.

Check your flavorings for the sweetener called Xylitol. This is a toxic artificial sweetener and should be avoided. So, the next time you are watching a movie with the dog, it is entirely reasonable to share your popcorn with the dog as long as you do it in moderation, and be careful when choosing your toppings!

My Dog Just Ate a Corn Cob! What Should I Do?

My Dog Just Ate an Entire Loaf of Bread! What Should I Do Now?