Can Dogs Eat Cat Food? What Happens When They Do?

Did your dog recently eat some cat food, and you aren't sure what to do? Our veterinarian Jo Woodnutt weighs in on if cat food is safe, and your next steps. 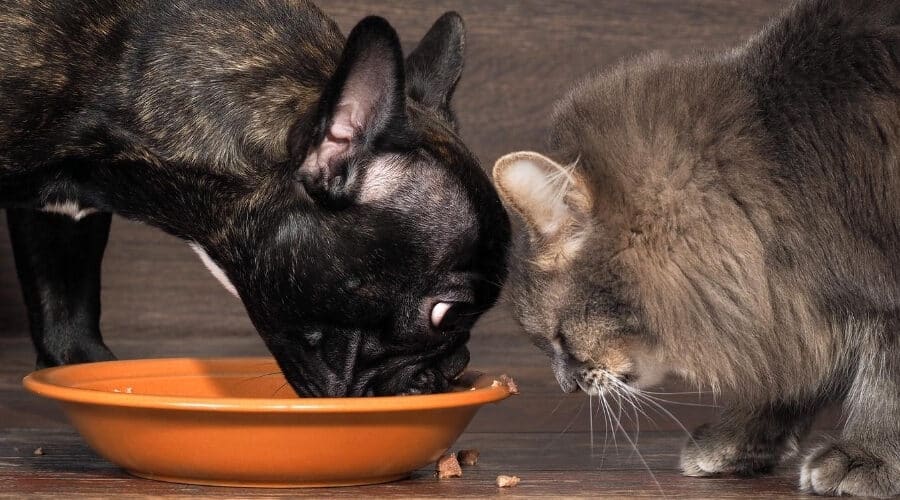 This article was written by a veterinarian, but it should not substitute as contact with a trained professional. If your dog ate cat food, we recommend you contact your own veterinarian.

Most cat owners feed their cat on the floor. This presents a problem when you have a greedy pup that loves to go and dig in when you aren’t looking. So can dogs eat cat food? And what happens when they eat a bunch of it? The short answer is yes. But you shouldn’t be sharing your cat’s food with your canine companion regularly, and there’s some caveats we need to explore.

Most dogs can eat a small amount without any problems at all. Cat food contains no ingredients that are poisonous to dogs. In fact, dogs can actually get some nutritional benefits after consumption. Given how much they like it, some dog owners have been known to use it as a high-value training reward on occasion.

While it’s usually safe for dogs to eat, they shouldn’t eat too much, or have it too frequently. It should not be a replacement for their normal dog food diet. There’s a reason why cats and dogs have different foods, as they have different nutritional needs. Your pup also shouldn’t eat any at all, even as a treat if they are suffering from liver or kidney disease, or prone to pancreatitis. Let’s dive in and look at some details.

When dogs eat cat food, they take in far more protein and fat than they’d normally eat. Many dogs will be fine doing this every now and again, but if you have a dog with a sensitive stomach, all this extra protein and fat can cause dogs to feel sick. Some dogs may start to vomit or have diarrhea or abdominal pain. Others may even progress to pancreatitis. This is a painful inflammation of the pancreas in reaction to the high levels of fat in the food. This can make dogs very ill. They usually vomit repeatedly and refuse to eat, sometimes for days on end.

What if Your Dog Ate Too Much?

The primary problem is that it’s high in protein and high in fat. When your furry friend takes in that much food at once, it can upset their tummy. If you’re lucky, you’ll get away with a bit of wind or some mild diarrhea after eating too much. Those who are less fortunate may find themselves at the vet’s office with a dog that is vomiting, has profuse diarrhea, and is refusing to touch any food. While gastroenteritis usually passes once the offending food is gone from the gut, pancreatitis can set in. Pancreatitis is much more serious and can cause severe dehydration and even death if left untreated.

My Dog Ate Cat Food, What Should I Do?

If your dog got into your feline’s food for the first time and you aren’t sure how they will react, there’s some steps you can take. Taking these steps will ensure that you minimize potential risk for your pup, depending on how much they ate.

The first thing you should do is stop your dog from eating any more. This might mean shutting them away while you clean up spillages, or removing the cat’s bowl to somewhere you’re sure they can’t reach. This is the first step in preventing them from eating any dangerous things, like chocolate, garlic, or non-food items like soap.

Step 2: Figure Out How Much Was Consumed

A single mouthful is unlikely to do harm, but gorging on the stuff could bring problems. The next step is to work out approximately how much you think they ate. If your pup has eaten a large amount you’re not only going to have to watch him closely, you might want to reduce his dinner portion accordingly so as not to overload his gut.

Step3: Watch For Signs of Trouble

The good news is you don’t need to rush straight off to the vet, as it’s likely they will be fine. If they’re going to be sick, it’s usually within the first hour or two, but it could take up to 24 hours to show signs of vomiting and diarrhea. Especially they get pancreatitis. Monitor their energy levels and appetite, as well as make note of any vomiting or diarrhea.

Even if your dog does vomit up the food, it’s not a particular cause for concern as long as they remain well and bright- but if they start to become lethargic, or can’t keep food down, or get diarrhea as well as vomiting, you should head to the vet for some supportive treatment, and possibly testing if pancreatitis is suspected.

Cats and Dogs have different nutritional needs. This is especially true if you have a much larger dog. Cats need meat to survive. Dogs do too but on a much smaller scale. Because of this, most cat foods are much denser when it comes to animal protein content.

Because most formulas are so much more nutrient-dense and concentrated, it’s not recommended for canines to eat long term. It also has a higher calorie count in a smaller package. This means your dog can gain weight and develop other health issues if they eat it long-term.

Any dog can get into things they aren’t supposed to eat from time to time. Because of that, we’ve fielded a number of common questions from our readers. We’ve compiled those questions as they pertain to cat food in the section below.

How Can I Stop My Dog From Doing it Again?

Prevention is better than cure! Try to keep your cat’s food out of reach- such as on the worktop or on top of a dresser. If your cat is senior, they may struggle to jump up due to arthritis. Consider making steps for them to reach their food, or shut the dog in another room when your cat is eating. Of course, teaching a strong ‘leave’ command can come in handy if you’ve got a dog who is prone to gobbling up everything in sight– especially if you regularly visit other houses with cats.

No! Dogs will not go blind if they eat cat food. However, theoretically cats can go blind if they eat dog food. This is because dog food doesn’t contain much taurine- dogs don’t need taurine in their diet and can make their own inside their bodies. Cats can’t make their own, so they need high levels of taurine in their food. When a cat eats dog food, they won’t get enough taurine, so over time they’ll become deficient. eventually causing blindness, heart disease, and problems with the nerves.

Can it Cause Kidney Failure in Dogs?

A one-off gorge on is unlikely to cause kidney failure. But some people have suggested that chronically eating cat food instead of dog food could damage the kidneys. This is because it’s much higher in protein than dog food, and the excess protein may put the kidneys under extra strain. If dogs already have dodgy kidneys, eating too much could damage them further, so isn’t recommended.

What’s The Difference Between The Two?

Cat food is perfectly balanced to meet the needs of cats, while lots of research has gone into making dog food a suitable diet for dogs. While we share our homes with both these species, and they may be found sharing food bowls, water bowls, and laps- they are still very different species. Cat diets have higher protein, taurine and alanine than dog diets; dogs have no need for these amino acids. Dog diets are likely to have higher levels of carbohydrates than their feline alternatives.

Cats can eat dog food as a one-off or for a very short period of time (no more than a day). Cats eating dog food is actually worse than the other way around. This is because cats need several amino acids and vitamins in their diets that dogs don’t need, or don’t need in such high amounts, so they aren’t included in dog diets. If a cat were to eat dog food for any length of time, they would become deficient in these proteins and vitamins, causing symptoms up to and including sudden death.

Can Dogs Eat it in a Pinch?

Theoretically, a healthy dog could eat as much as he liked. In reality, this is a bad idea due to concerns about obesity, gastroenteritis and pancreatitis. Still, in a pinch you’ll probably get away with feeding some to your dog on occasion. Just be prepared for an explosive result if they haven’t tried it before.

So there you have it! Cat food, generally speaking, is safe for dogs as long as it’s ingested very sparingly. In most circumstances, it’s not going to require a trip to the vet. However, if you see your dig display any erratic behaviors, we’d recommend that you call your vet immediately. While we can provide guidance based on our experience, it should not be a substitute for calling your vet or even a vet visit.