If your dog just ate chicken bones, there are some important steps you need to take right away. Veterinarian Joanna Woodnutt weighs in on what to do, and what your next steps should be immediately after consumption. 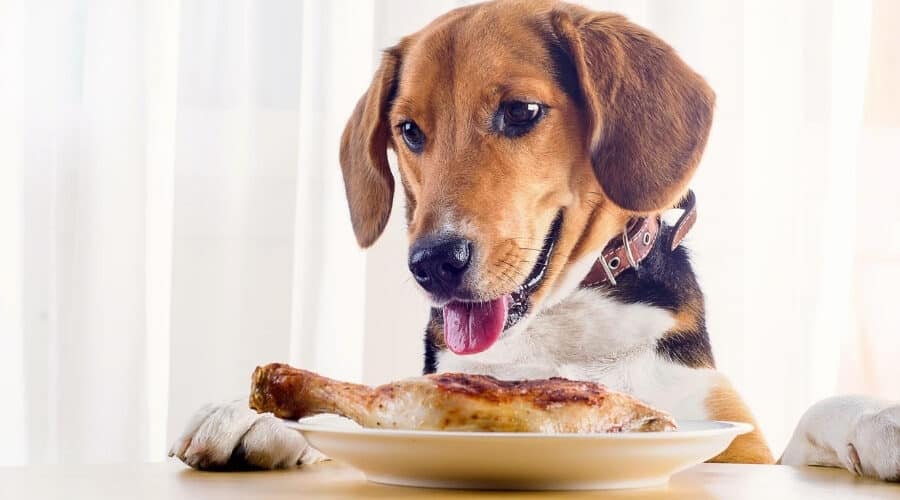 This article was written by a veterinarian, but it should not substitute as contact with a trained professional. If your dog ate chicken bones, we recommend you contact your own veterinarian immediately.

Did your dog just eat chicken bones, and you aren’t sure what to do? Almost all dogs, at some point or another, have eaten something they’re not meant to; and chicken bones are often one of these things. This actually happens frequently and is not surprising. Chicken is one food that seems to universally adored by our canine pals. But, chicken bones can be extremely dangerous to dogs.

Cooked chicken can be part of a nutrient-dense nutrition plan for your pup. It works well with vegetables like zucchini, cooked sweet potatoes, or even bell peppers. Sometimes cooked chicken bones make their way into your dog’s meal by accident, and they can be very dangerous if that happens.

Some dog owners will try to self-treat, and this is a mistake. If your dog ingests chicken bones, you need to call the vet. There are several steps we recommend you take, which we discuss in detail below. So, let’s take a look at what you should do if your dog ate chicken bones.

When the dreaded does happen, it’s important to remain calm so you can do what needs to be done. Don’t discipline your dog immediately. You need to stay calm, and not scare your pup. Below, we’ve given our step-by-step instructions for how you should handle this tricky situation.

The first thing you need to do is make sure your dog can’t eat any more bones. And it’s also a good idea to make sure no other animals in the house will come across the bones and get in the same situation. Shut your dog away quickly. Afterward, quickly clean up any spilled bones to ensure there are no more hazards.

It’s important to remember that calling a veterinarian costs nothing. They can give you valuable advice about what to do, and what not to do. They’re also in a position to help you weigh up the risks of leaving the bones in situ and can advise you about your particular dog’s situation based on his size, breed, and other factors.

There is a risk of the bones becoming stuck. Unless your dog is in distress most vets will not recommend that you make your dog vomit. Your vet might ask you to feed your dog something to ‘cushion’ the bones and make it more likely that they’ll get as far as possible while minimizing potential damage.

This might be bread, pumpkin, or even asparagus! Trust your vet to advise you as to the best course of action! Most vets will not ask that you rush them in. They should give you personalized advice to give your dog the best chance of passing the chicken bones safely.

A lot of people panic at this point. Some dog owners try to treat their dogs on their own. They might be worried about the costs of a vet trip, or not want to admit to the vet what happened. Either way, they quickly research likely courses of action and try to cope on their own. This, however, can be dangerous.

For instance, often you’ll find instructions for making your pet vomit at home. Chicken bones can get stuck coming back up. They may lodge somewhere and do more damage. They will also be difficult to remove on the way back up. Some often-suggested medications are unsafe if your dog has eaten chicken bones. Following instructions from somebody other than a vet can be dangerous. This is true even if the person providing the advice says their vet recommended the course of action.

Now that you know what to do if your pup just ingested chicken bones, you may have some additional questions. Below are some common questions that many dog owners have after their pup eats chicken bones. If you feel we’ve missed anything, drop us a line in the comments!

Unfortunately, chicken bones are no different from other types of cooked bones and can be dangerous to dogs. They’re very brittle, especially when cooked, and can easily splinter in your dog’s powerful jaws. Instead of a tasty snack, the bones can turn into a mouthful of sharp points that can damage the gums, injure the throat, pierce the gullet, or make it all the way into the stomach to cause havoc there.

Chicken bones can also ‘go down the wrong way’, causing choking and coughing. Dogs’ stomachs can partially digest bones, but it takes a while- during which time sharp bits of bone can cause problems. The undigested portion can also get stuck in the guts, causing a blockage.

Chicken bones have been known to kill dogs. It’s rare, but it does happen. The worst cases are when the bones pierce the esophagus (gullet). The esophagus runs from the mouth to the stomach, through the chest cavity, and alongside the lung and heart.

Like all parts of the gastrointestinal tract, it’s considered ‘dirty’- bacteria and other microorganisms are rife. If anything, it’s ‘dirtier’ than the stomach- without the benefit of stomach acid, anything that passes through the mouth goes through the gullet, carrying bacteria.

So, when the protective layers of the gullet are pierced (‘perforated’), bacteria can get from the gullet into the chest cavity. Even assuming the shard of bone doesn’t do any damage to the lungs or heart, the resulting infection and inflammation from the esophagus being pierced can be dramatic, and even fatal.

Raw chicken bones are less dangerous for dogs than cooked chicken bones, as they don’t splinter as easily. It doesn’t mean they can’t cause a problem, though, and if your dog gets hold of one you should still follow these instructions. This is true even if your dog eats chicken bones as part of his normal diet, although if they’re ground up sufficiently then the risk is very low. Many people feed their dogs raw, and it’s not uncommon for dogs to catch and eat the occasional bird in your backyard.

But My Dog Ate Chicken Bones Before?

Unfortunately, just because a dog has got away with eating bones before does not mean they’ll be ok a second time around. Whilst the vast majority of times a dog will cope just fine with eating a bone, there’s also a chance they won’t- so it’s best avoided wherever possible.

It’s true that dogs are, on the whole, well designed for eating prey and their bones. Dogs have eaten bones for hundreds of years. So, what’s the difference now? Well, for one thing, modern veterinary medicine has meant that we’ve been able to discover more about why dogs die.

We can even use cameras to see what damage has been done to the digestive tract when bones are eaten- just because it’s natural doesn’t mean it’s safe. It’s also thought that dogs are more likely to have trouble with bones when they swallow them quickly rather than taking their time chewing- perhaps because they’re trying to ‘get away with it’ or ‘hide the evidence’, or even just because their owner is tugging on the lead asking them to get a move on.

Labradors have even been found to have a ‘greedy gene’ that probably isn’t present in early dogs! Either way, gulping bones down is more likely to result in trouble than chewing them carefully!

Help! My Dog is Choking on a Bone!

If your dog is gagging, choking, rubbing at their face, drooling, coughing or spluttering after eating chicken bones, you need to call the nearest open veterinarian to let them know you are coming and get over there as quickly as possible.

Bones, especially chicken bones or pork ribs, can get stuck in the mouth. They can also get stuck at the back of the throat, or further down. This can cause pain, breathing problems, and even death. As long as your dog can breathe, it’s not a good idea to try to get the bone out at home- even if it looks close you could get hurt, and you risk pushing it further in.

When Should I Worry?

The first thing to keep an eye out for is whether the bones get stuck in the mouth. This generally causes pawing at the mouth and excessive licking and drooling. If the bone gets stuck further back you might see sneezing, coughing, and spluttering.

Bones that lodge in the esophagus might cause shallow breathing, pain, gulping, or even vomiting. All these signs are likely to occur within the first ten minutes, but If the bone makes it to the stomach the signs can take an hour or more to appear.

If the bone makes it to the stomach, the worst is over- but that doesn’t mean you can completely relax. Perforation of the intestines is still possible, and this can cause peritonitis, which is extremely painful and will need extended hospitalization.

How Long Until Chicken Bones Pass?

If your dog seems to be fine after his chicken bone escapade, you may be wondering when you can relax again. How long does it take to pass a chicken bone? Well- that varies, depending on the dog age, breed, size and usual diet. Usually, the chicken bone will pass within 24 hours, but some dogs can take over two days to pass chicken bones.

What Other Foods Are Not OK For Dogs?

There are other things your dog shouldn’t eat, and some things that aren’t big deal. Chances are if your pup ingested some chicken bones, they may be likely get into other things as well.  Below are some recommended articles that we’d say are worth a look if your pup has a bad habit of getting into things they shouldn’t.

Hopefully, you now have a better understanding of how to react if your dog does eat chicken bones. The important thing to remember is to stay calm and do not cause your dog to stress out. Call your vet immediately and do exactly as they instruct. With some luck and following your vet’s instructions, you may end up without much impact to your pup. If your dog needs surgery, it’s important for your vet to diagnose that right away.

Can Dogs Eat Graham Crackers? Yes, But in Moderation!

This might sound strange , I have a 5 year old American Cocker spaniel . I have been feeding her frozen chicken wings from Costco for all of those years , she waits by the freezer every night for her treat . At $2.19 a pound its cheaper then those fake treats you buy in a bags.

Hey Mike! Hopefully, it's the boneless wings you are feeding your pup? If the wings contain any bone fragments, you could be setting yourself up for a big vet bill down the line. If it's a boneless version, then from there it would just depend on what the wing was coated with to determine how safe it is.

Why Do Dogs Lick their Paws and How Can I Stop it?