Do you have a wolfy looking dog, turning you to the world of wolves to find the perfect dog name? These 300+ ideas are sure to provide plenty of inspiration! 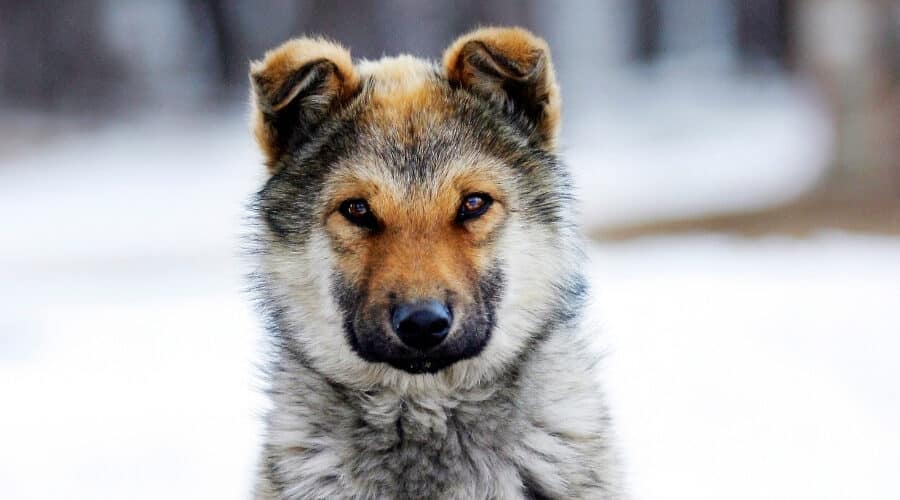 This leads to many people turning to their favorite literary work about wolves, or what finding what the word “wolf” may look like in other languages. Naming your dog after their looks is a common theme, and many owners of big dog owners tend to follow suit.

If you have a wolfy looking dog, below you’ll find over 300 different naming ideas to help you find the perfect moniker for your canine companion. Remember, your puppy doesn’t need to have a name from day one. It’s something you can take a little time on. Don’t feel rushed or stressed. Let’s jump into looking at our favorite dog names for wolfy looking pups.

People often associate wolves with the Native American culture. Native Americans use wolf symbolism a lot in traditional situations. According to Wolf Song of Alaska, Native Americans feel wolves are powerful and often use them in healing ceremonies. They feel a connection to the wolf because they and wolves have a strong instinct to protect their families. Native Americans also revere them for their hunting abilities and honor their strong will to defend their territory.

If you want to be literal in the naming of your dog, you may decide to borrow from other languages. There are many different languages that give completely different sounds to the word “wolf.” Below are our favorite ways of saying “wolf” in different languages, each of which can make a uniquely beautiful dog name.

Geography can offer up a range of names that are fitting for a wolf dog. You can go with names that fit from where wolves come. Natural habitats include Alaska, the Arctic, Canada, Mexico, the southwestern U.S., the Great Lakes area, and the Rocky Mountains.

You might choose the names of places you’ve visited or that are dear to your heart. Some geographic names also may come from the feeling they evoke in you that makes you think of your dog.

Nature’s beauty is all around us, and wolves are part of that, so you may want to choose a name that reflects that. You can use anything from tree names to astrological names. Whether you decide to name your pup after a star, or after a beautiful type of rock, many of the names below can suit your wolfy pup.

Mythology provides us with amazing stories about gods and goddesses. They talk about people who do awe-inspiring feats and who have other-worldly attributes. They are heroes with legacies. It is no wonder that many wolf dog owners borrow from mythology to find a name for their new family member.

Wolves are often characters in fairytales and other stories. They are sometimes the villain and sometimes the hero. You have likely read a book, heard a story, or watched a television show or movie with a wolf as a prominent character. If you wish to honor your favorite famous wolf, you may want to consider one of the following names.

If you like to think outside the box and want your dog to have a unique name, then we’ve put together a list of cool wolf names you might consider for your dog. They are fun and sometimes whimsical. Giving your dog this type of name may also help make others feel more at ease with your wolf dog and dispel some of the stereotypes associated with them.

Since wolves are pack animals, there is always an alpha. Animal Planet explains alphas can be male or female and act as the leader of a pack. They take on the highest role with the most responsibility for the safety of the other pack members. Alpha dog names are serious and regal. They get special treatment from other pack members because they are royalty, but at the same time, they act as the enforcer of the rules to make sure everything is fair. Alpha dog names are almost always considered tough or strong.

If you are someone who likes to stay on top of trends, then maybe your best choice for a dog name is what is popular right now. According to the American Kennel Club, the top names for dogs seem to follow the same line as the top names for babies. So, you could say these are also the most popular human names for dogs.

It is a difficult task to name a dog because it means so much. After all, you will call out the name often and share it with others regularly. To help you avoid a name faux pas, here are some things to keep in mind as you narrow down your choices.

Make It Easy To Say

Make sure it is easy for you and your family members to say. The New York Times suggests choosing a simple name that is one or two syllables. One thing to consider is children who may have a hard time saying certain letter sounds. If you want your dog to be responsive to its name and listen to everyone, make sure you do not choose something that is too hard for your children to pronounce.

It is very easy to get so caught up in choosing a dog name that you do not realize the name you choose has a negative connotation. A very good example is Isis. That is a beautiful name, and one that used to be very common for female dogs of all breeds. However, due to the terrorist group with the same name, it now is less desirable.

You want to give some thought to the impression you will make on your neighbrohood when calling out your dog’s name. Imagine how you would feel if you heard someone yelling, “Demon! Come here, Demon!”

While you certainly have the right to name your dog whatever you want, it is a good idea to be smart about it. If the name you want has a negative image, consider a slight alteration of the name instead. For example, Adolph has not faired very well, but you could shorten it to Dolph, which does not bring up images of a Nazi dictator.

Your dog’s name should be clear and easy for it to distinguish as its name. Avoid choosing names that could confuse your dog, such as those that sound similar to commands or names of people or other pets in your family. Make sure you do not use a word that sounds too much like common words, as well.

Choose something you don’t hear all the time, which is another trick to avoid confusion, especially when you are out in public or at a dog park where a common name could cause your pup to lose focus.

Once you choose a name, keep using that name. Don’t try out different names. This will only confuse your dog and make it less responsive. It won’t know what its real name is. This is also true of nicknames. If you want to use nicknames, wait to use them until your pup fully knows and recognizes its real name.

Choosing the right name comes down to personal choice. Take time to go through the suggestions, and you’re sure to find the perfect name for your wolfy looking pup, or wolf-dog hybrid. You can always ask others for suggestions, too, but don’t worry about what anyone else thinks. What you like may not be somebody else’s cup of tea, but that doesn’t matter. It’s your dog, so the only thing that matters is that you like the name.

Please include attribution to LoveYourDog.com with this graphic.