Why Do Dogs Sniff People’s Crotches? 5 Reasons Behind This Disturbing Behavior

Does your dog greet you with a swift sniff of the crotch? Ever wonder why? This common canine behavior can be awkward for pet owners to handle. But, there is more to this behavior than meets the nose. Learn more about why your dog sniffs people's crotches, how humans feel about this behavior, and how to change it. 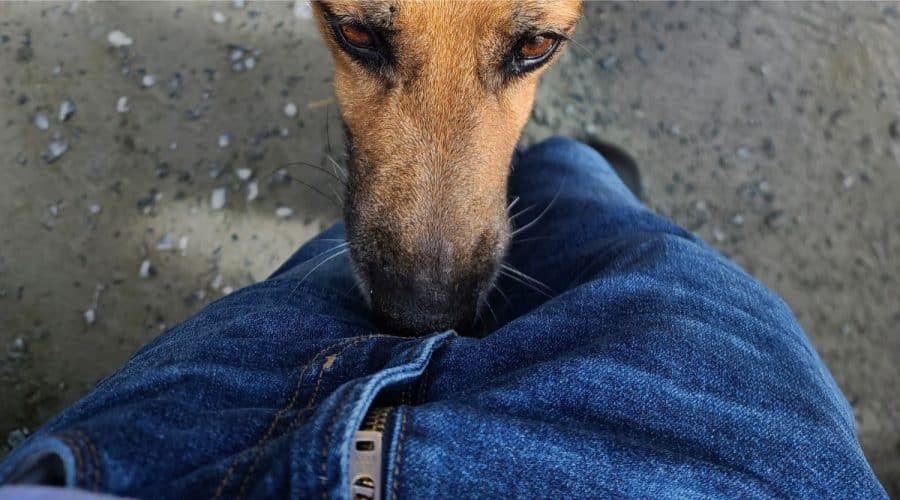 Ever wonder why dogs love sniffing people’s crotches? Every dog lover knows that being greeted by your special pup means lots of love and excitement. It also means a high possibility of getting your crotch sniffed, quite intrusively, by your beloved canine companion. This kind of unwanted attention can cause an adverse reaction from humans and make for a very awkward situation when your dog does this to someone else.

Dogs are well known for turning up at the most inappropriate moments and giving us an uninvited sniff of the crotch. They can pop up from under the table or try to get in when cuddling on the couch. This awkward behavior can be alarming to some people and makes anyone feel uncomfortable, at the least.

As dog owners, crotch sniffing behavior may be something that we put up with regularly because we love our pets, and we may not know how to stop it. However, it can be embarrassing and even offensive when this behavior happens to guests, significant others, and during notable events like holiday gatherings or work meetings. Learn why they do it and how to get them to stop.

Is It Normal For Dogs To Sniff People’s Crotches?

Let’s face it, having a dog stick their face into your crotch is an uncomfortable, embarrassing, and offensive experience. While most people would say this is not something they enjoy, it is a commonly seen behavior among canines and something we as humans have learned to tolerate.

In fact, in 1996, a judge from Connecticut was sued for sexual harassment by an employee over his dog’s habit of nuzzling women under their skirts. The pooch came with him to work and liked to greet people around the office. The case was dismissed on the reasoning that a rude canine did not constitute immoral or illegal behavior on the part of the owner.

Dogs have an enormously powerful sense of smell, and they use this strength to learn everything they can about the world around them. This curiosity includes sniffing other animals and people they encounter. Dogs are inquisitive creatures, and their noses are one of the main ways they gather information.

Sniffing at people’s rear ends or crotches is normal for dogs because they simply follow their noses. While it is normal behavior, it does not mean that it is appropriate or appreciated behavior.

To find out how pet owners feel about this awkward behavior, we commissioned a survey of 2,000 U.S. adults to explore whether dogs sniffing our crotches makes us feel uneasy.

The survey found that two-thirds (66%) of Americans find being sniffed by a stranger’s dog discomfiting. Furthermore, 64% felt the same when it was a dog they knew but not their own pet.

Analyzing the age demographics within the survey revealed that the older generation tended to find it particularly uneasy, with 76% of people 55+ finding it uncomfortable when a stranger’s dog sniffs their crotch, compared to 64% among younger generations.

Why Do Dogs Smell Each Other?

While we may question a dog’s sniffing butts behavior and certainly would not tolerate it from another person, our fur babies are built differently.

There is also a determination of dominance that comes from sniffing each other. Usually, the more dominant pooch will be the first to sniff, and the other will wait. Some dogs do not want to be sniffed and may growl, nip, or simply sit down.

Dogs sniff each other as a way of communicating and gathering information. Just as humans size up and collect information about those we meet, dogs do the same. Canines have a much stronger sense of smell than humans, more on that later, and utilize it to learn things about each other.

Why Do Dogs Sniff Our Crotches?

There is much more that drives crotch-sniffing behavior in dogs than the assumption that they just really like to smell people’s private parts. It helps pet owners to understand a little more about why their puppers are so interested in sniffing private parts.

Dogs will notice these scents, even if we cannot smell them ourselves. Because people often wear cologne, deodorant, perfumes, etc., dogs are more likely to sniff out the crotch or rear end area. While this may seem silly, another part of the reason many dogs sniff our crotches is that that is the area they can reach best.

In dogs, the apocrine glands can be found all over their bodies. However, they have the highest number in their genitals and anus. This is another part of the puzzle of why dogs sniff each other’s and human’s private areas.

Canines have much more powerful noses than humans do. Humans have about 6 million scent sensors in their noses, and canines have about 300 million. This gives them a sense of smell that is at least 10,000 times stronger than humans. Canine anatomy is different than human anatomy. Dogs have a special organ that is dedicated to processing smells. The vomeronasal organ, or Jacobson’s organ, is set inside the nasal cavity, just above the roof of a dog’s mouth. This organ is connected to the scent-interpreting part of the brain.

The Jacobson organ opens into the roof of a canine’s mouth just behind their upper incisor teeth. Its job includes being a secondary olfactory system that focuses on chemical communication. Jacobson’s organ has nerves that go directly into the brain. These are different nerves than those found in the olfactory tissue of the nose.

These nerve cells do not work the same way nor respond to regular smells. They react to substances that are considered odorless or have no discernable scent. The Jacobson’s organ combined with a canine’s nose creates a mighty odor detection process. These two systems work together. This combination of these two powerful systems is one of the reasons why dogs have been trained to sniff out substances like drugs, explosives, and even diseases such as cancer.

About 5% of brain mass is used for olfactory or smelling behaviors in the human brain. About 30% of the canine brain mass is dedicated to detecting and identifying different smells and odors. This means your sweet pup has a sense of smell that reaches superhuman strength.

One of the main reasons dogs sniff our crotches is because they are seeking out information. Pheromones, body odors, and the scents they notice on our clothing give clues to what we have been doing and where we have been. A dog can tell a lot by smelling humans, and they are attracted to body odor and pheromones right away. Sniffing a human’s crotch, in particular, gives away information that many humans would rather keep private.

All canines sniff. There is no question about it. Some breeds may be more driven by scent, in particular scent Hounds. Scent Hounds are Hounds that hunt by scent instead of relying on sight. Beagles, Basset Hounds, Bloodhounds, Coonhounds, Dachshunds, Foxhounds, and more fall into this group. Other breeds like German Shepherds, Golden Retrievers, Labrador Retrievers, and Scottish Terriers are known for their smelling capabilities and may be more likely to sniff in places they are not welcome.

What Can A Dog Learn From Sniffing Human Crotches?

How To Stop Crotch Sniffing Behavior

While our canine companions sniffing crotches may be normal behavior, and we can explain why they do it, that still does not mean this is appreciated or welcome. It can become a very upsetting problem for obvious reasons. The good news is that there are ways to discourage pups from sniffing human crotches. Professional training can be considered for overly aggressive pups or those who refuse to change their pushy sniffing behavior.

Tips To Prevent Your Dog From Smelling Crotches

Humans love their pups, and pups love their humans, but that does not mean we love all their habits. The sniffing of crotches is something we all know dogs do and have learned to accept. While it is normal behavior, it can be bothersome. The good news is that there is something you can do about it. Talk to your veterinarian or professional trainer if you have concerns about your dog’s health or need help with behavior training.

Why Does My Dog Seem To Follow Me Everywhere I Go?