Are you looking at the Whippet and the Greyhound as your next canine companion? Though they both come from the Greyhound family and have very similar looks, there are some differences. Find out what sets these two slender dogs apart! 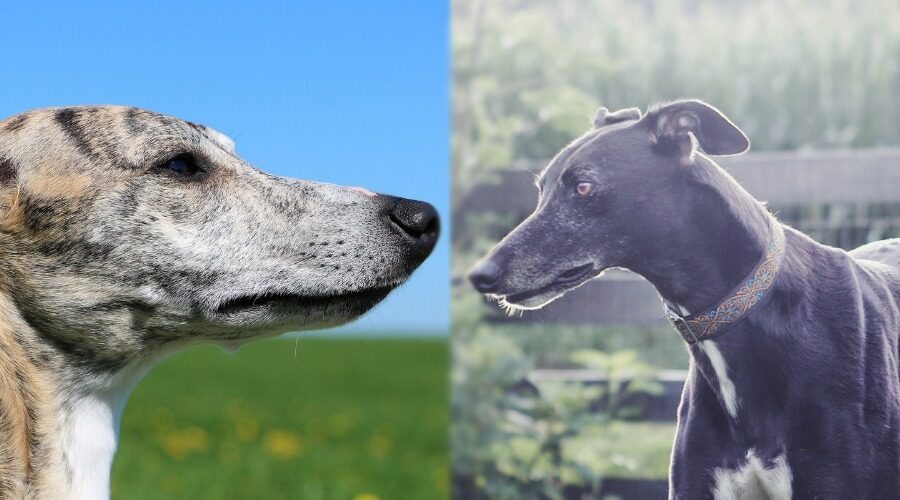 The Greyhound and the Whippet are sweet souls that are affectionate and loving towards their families. They also make for a great family pet, as long as there are no cats or small animals involved! While it’s become popular to mix these two breeds, they are also commonly mistaken for one another.

The biggest difference between them is that the Greyhound is much larger and slightly more expensive compared to the Whippet. They are so similar in temperament and looks that they could easily pass as brother and sister.

However, there are small differences between them that might be a deal-breaker for you or your lifestyle, and so it is important to compare them in detail. It’s also important to note that these two also have other breeds as direct descendants, so these two aren’t the only pups in this family that look alike.

The Greyhound is one of the oldest known breeds whereas the Whippet is considered to be a comparatively new breed; however, they share a similar history and the same D.N.A.

The Whippet is a medium-sized dog who is a direct descendant of the Greyhound, so they are not just similar, they are family. The Whippet is a relatively new breed, only known to have been in existence for the last few centuries.

His journey is documented to have begun in Victorian England where he was known as the ‘poor man’s Greyhound.’ Without the space to house a Greyhound, nor the resources to feed him, local miners bred a cheaper smaller version, but one that was still fast enough to hunt small animals.

It is not known what other dog breed they used to breed with the Greyhound, but it is believed to be long-legged Terriers of some sort. English immigrants took the breed to North America in the early 20th Century.

The Whippet can reach speeds of up to 35 mph, but he is said to be the World’s fastest accelerating dog. He is also the 61st most popular breed in America according to the AKC.

The Greyhound is an ancient breed first mentioned on the Tomb of Amten in Egypt, which dates back to 2900 B.C. and is also the only breed to be mentioned in the Bible (albeit the King James Version), which is a claim to fame for sure!

The Greyhound is the fastest dog in the world and can reach speeds of up to 45 mph. They were brought to Europe in the Dark Ages, and after some time taken to America by British Colonists. They were originally used as hunting dogs to catch coyotes, stag, and wild boars; the hare, however, is his main quarry.

They were officially recognized by the American Kennel Club (AKC) in 1885. One year later the first-ever official hare coursing race took place, and ever since then, the sport is very popular across the globe, but also very controversial. The AKC has ranked the Greyhound as the 145th most popular dog in America out of 193 breeds.

The Greyhound and the Whippet are very similar in their appearance, and some would say the Whippet is just a ‘mini-me’ version of the Greyhound. They both have a long narrow muzzle, and small rose-shaped ears that fold back, but when alert or excited they stand upright.

They have a slender body that is skinny in appearance, and often you can see their ribs and spine because of their short coat. Their chests are wide and deep with an arched back and their tail will often fall between their legs.

Not only are they affectionate with their people they are also both great with other dogs. However, if you have small pets in your household, including very small dogs that they have not been raised alongside, they are likely to chase and often injure them. This is particularly true if you were to adopt an ex-racing dog.

They both rarely bark, and as such, they would not make for a great guard dog. However, this is great if you live in an apartment or similar type of housing that is subject to noise regulations. Untrained pups, however, do have a tendency to whine if they want something from you, or if they are left for too long on their own, so this is also a matter for consideration.

They also both get super cold, and their chattery teeth will warn you of this, so be prepared to invest in a shed load of jumpers! Their chattery teeth is also a sign that they are very happy. Salty the Greyhound has her own Instagram page with over 60K followers, and she shows exactly how cute this trait is!

As they are the fastest and nearly the fastest dog in the world, many people think that they are high-energy, but this really is not the case. They are sprinters and not distance runners, and as such, they have short bursts of energy. A brisk long walk or two a day will suit these medium-energy guys.

The Greyhound would also appreciate more mental stimulation throughout the day in the form of interactive games with his master, and of course, being the bigger pooch out of the two it will take a few more miles a week to wear him out compared to the Whippet. Aside from this they both enjoy being couch potatoes and are known to be quite the snug bug!

If you have a large contained yard then they will also enjoy a good sprint, but be warned, if they catch the scent of an animal they will take off into the sunset until they’ve caught it. With that in mind, it is advisable never to let your Greyhound or Whippet off-leash in an unconfined area. They may trick you with their great recall skills, but they have a very high prey drive so don’t be fooled by their puppy dog eyes!

Both the Greyhound and the Whippet are considered to be ‘independent’, which is just a polite way of saying that they are both stubborn creatures and they are often difficult to train. Therefore, they are not recommended for a first-time dog owner who has no experience of training a pup. If you adopt a former racing greyhound, pick the right harness to train them as they are natural pullers when their prey drive kicks in.

Because they are independent, early obedience training is critical to ensure that they are more likely to listen to you when they’re older. Additionally, because of their timidness, it is really important for them to be socialized as early as possible so that they grow up being comfortable in new situations with all humans and animals alike.

The Greyhound is required to undergo a Polyneuropathy NDRG1 DNA test. This health issue is characterized by muscle weakness and exercise intolerance, and it can be fatal. Further to this, the Greyhound is also susceptible to Osteosarcoma, which is an aggressive form of Bone Cancer.

The Whippet is required to undergo a BAER test, which is an electrodiagnostic test that examines the components of his ears to identify if he is deaf. Von Willebrand’s disease can also be found in Whippets, which is caused by a deficiency in the number of particular platelets in his blood, which means that his blood is unable to clot.

Both breeds are sensitive to anesthesia, and what may be used as a dose for another dog may be fatal for them, so be sure to remind your Veterinarian of this should you need to take your pooch for treatment. Former racing dogs may also have weaker tendons as they age, so be prepared for a big vet bill if your pup tears their ACL.

The Greyhound will eat 3 to 4 cups of food per day, whereas the Whippet will eat slightly less between 2 and 3 cups of food a day, of course, this is dependent on the size of your pup. Because they are so frail with little frames, obesity is particularly harmful to their joints, so monitor their food and treat intake between meals.

Both the Greyhound and the Whippet have short and smooth coats that are very low maintenance. With that being said, they do still shed, and regular brushing will pick up any hair that might otherwise find itself onto your sofa and clothes; once or twice a week will be adequate. They only need bathing once every two months or so, and very rarely do they smell of doggy odor.

Both the Whippet and the Greyhound suffer from dental problems due to their narrow and shallow jaw, and as such their teeth need brushing a few times a week in order to keep bad breath and other periodontal diseases at bay. Do not use human toothpaste as it can be extremely harmful to dogs, your local pet store will provide specific dog toothpaste.

As their skin is so thin, they are prone to getting cuts and scrapes on their underbelly, especially if they are allowed to run through areas with grass and twigs. Check them frequently to ensure that they haven’t become infected, and although they look sore, unless they are deep lacerations rarely do they cause the pooches an issue.

The price is another difference between the breeds. The Greyhound can cost anywhere between $1,500 to $2,000. Whereas the Whippet costs between $800 and $1,500. If you are seeking an award-winning racing Greyhound, from a famous lineage, then you can expect to pay up to $15,000. After all, Greyhound racing is still a big sport with big bucks to be made!

The above prices are that of pups from reputable breeders, and these will be the pups that are the healthiest. So if you are going to buy a pup, then be sure to buy from a reputable breeder and not a puppy mill. If the price sounds too good to be true, then it probably is!

With so many Greyhounds and Whippets being dumped after they are unable to race, there is an extremely high number of these guys up for adoption if they are lucky enough to escape immediate euthanasia. With the average cost of adoption being between $50 and $350, you will certainly be saving a lot of money, but you will also be a lifesaver! The National Greyhound Association of America provides a list of rescue centers in each state solely dedicated to rehoming ex-racing Greyhounds, so if you are thinking about saving a life, then check this link.

The Greyhound and the Whippet are sweet souls who are a pleasure to be around for all the family (unless you are Garfield or Thumper!). It’s tough to say which would win in a paw race when putting the whippet vs. the greyhound, but both dogs are fast and love just as quickly as their feet!

The truth is, that there aren’t many differences other than the size and the price between these two. So, whichever pup gets your heart racing, you will certainly be a winner!

The only breed to own. They are beautiful souls... ❤