Are you struggling to decide between adopting a Westie or a Westiepoo? We look at these two very popular dog breeds to find out why you might pick one over the other, comparing breed history, puppy costs, health, grooming, and more! 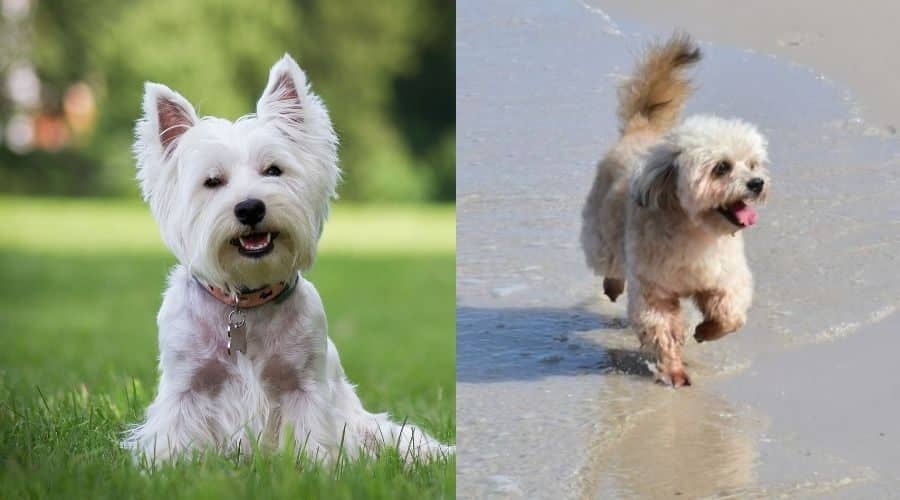 Are you considering which pup to adopt next? Maybe you’ve whittled down your choices to the spunky, purebred Westie and the designer Westiepoo crossbreed. If so, you’ve come to the right place to discover which pup might fit better with you and your lifestyle.

The Westie and the Westiepoo are very similar dogs. After all, the Westiepoo is half Westie, with the other half being the elegant Poodle. But there’s got to be a few differences, right? You are correct. Although there are fewer variations than there are similarities, it is these differences that might help you to pick between these two playful pups.

In this breed comparison, we explore their history, breed purpose, and how that affects their personality. We also look at the differences in their needs when it comes to training, grooming, puppy prices, and more.

The Westie, officially known as the West Highland White Terrier, is a purebred dog from Scotland. There are many tiny terriers from Scotland, and they are all bred with one primary purpose – to eradicate rodent infestations. They are small enough to reach into small corners but sturdy enough to kill a rat once they’ve found it.

This little guy came into focus in the 18th century when the Malcolm clan began breeding white earth dogs on their north-western Poltalloch estate. And this is why they are sometimes called the Poltalloch Terrier. They regularly find themselves in the top 50 dog breeds in America.

Truthfully, there’s not much to say about the Westiepoo’s history as they are relatively new designer dog breeds. Instead, it’s essential to focus on the Westie’s and Poodle’s history. The Poodle is a duck hunting dog from Germany. This hunting streak makes them much more energetic than people think. Later, the French nation fell in love with the beautiful pooch and bred them small enough for lap dog life.

Both are very similar in their appearance. They are both small dogs with wavy or scruffy hair. They have cute smiles with big, round eyes. And they both have a happy and sometimes mischievous gaze. But when comparing them side by side, it’s easy to see that the Westie is the smaller and squatter of the two breeds. And the Westiepoo has an air of sophistication about them.

The Westie is usually the smaller of the two dogs. They typically weigh between 15 to 20 pounds and measure 10 to 11 inches tall. The Westiepoo usually weighs between 20 and 30 pounds and measures between 11 and 17 inches tall. If the size of the Westiepoo is a significant consideration for you, you need to confirm with your breeder what size the Poodle parent is. Also, be sure to look at their parents for a better idea of size.

The Westie has a scruffy appearance thanks to his harsher outer coat. The Westiepoo’s coat is usually influenced by the Poodle coat, making it wavier and softer. The Westie always sports a white coat. Otherwise, they are not a true Westie. The Westiepoo is usually white or cream. But sometimes, they are born with other colored coats such as black, tan, or a mixture of colors.

Thanks to their hunting breed history, they both have a high prey drive, which means that you need to be on top alert when around other smaller animals. The Westiepoo is more likely to jump into the local lake in pursuit of duck happiness. And rats are the Westie’s favorite.

With a streak of terrier in each, you can be sure to find a fun Fido in both dogs. They are active and full of beans, and neither are considered true lap dogs. If you are looking for a four-legged partner in crime or adventure buddy, both are up for the job. When exercised well, they both settle down for snuggles on the sofa with the family.

They are both well-balanced dogs in the family home, making them ideal options as your next family pet. Sure, they are both active and curious pups, but they also love to chill with their favorite humans. They both enjoy hanging out and playing with the kiddos. And thankfully, they are substantial enough not to be accidentally hurt by overexcited children.

Both are very adaptable and could happily live in any loving family home, be that a small condo or a large house with a substantial backyard. They are pretty easy-going pups as long as they feel loved and are kept company for most of the day.

Suppose your Westiepoo inherits separation anxiety tendencies sometimes found in the Poodle. In that case, Westiepoos might be more sensitive to spending time alone compared to the more independent Westie. But this shouldn’t be too much of an issue with the proper training as a puppy.

The exercise regime for both breeds is also very similar. Neither of them needs more than an hour, thanks to their little legs. But they certainly need more than a casual walk around the block. They both need their exercise to be challenging and varied if you want to burn their excess energy away.

They also need to be entertained throughout the day to keep them happy and prevent destructive behaviors. Invest in interactive toys such as ropes or frisbees to chase. And for the times when you cannot entertain them yourself, high-quality squeaky toys appeal to their inner hunter. And brain games are bound to keep the intelligent Westiepoo occupied.

Both of them are suitable for first-time dog owners because they are eager to please and intelligent. Out of the two breeds, the Westiepoo is likely to be the easiest to train. Their smart Poodle genes usually assist them in picking up commands quicker. And the Westie can have a stubborn streak.

They both need to be socialized from a young age if you want them to transform into well-balanced and polite dogs that we expect them to be. The critical window for socialization is 3 to 12 weeks, so be sure to start the training right away. Considering their high prey drive and penchant for rats and ducks, we do not recommend trying to mix them with these guys.

The best method to train both breeds is the positive reinforcement training method. Both behave much better when rewarded for their excellent behavior. Plus, they shy away from overly harsh training. It’s essential to recognize the difference between rewarding good behavior and spoiling a dog. This can lead to “small dog syndrome,” evident in many small dogs.

Crate training is advised for both to stop them from getting into trouble and lower their anxiety when left alone. The Westie can be a naughty little guy who might dig their way through your sofa simply because they are bored. And the Westiepoo because they can become equally destructive when feeling lonely.

Responsible Westie breeders should test their Westies for a condition called hip dysplasia. This occurs due to abnormal formation of the joint, so be sure to ask your breeder for their hip scores.

Both are prone to luxating patella, where the kneecap dislodges itself and floats. This affects smaller dogs more than larger ones, so look out for symptoms such as kicking out on the affected leg or general mobility issues. They are also both susceptible to eye problems such as progressive retinal atrophy, a degenerative disease of the retina. If not treated, this can lead to complete vision loss.

Because the Westiepoo is slightly bigger on average, they might eat a little bit more than the Westie, but not by much. How much they eat is dependent on their age, size, and activity levels.

These guys will do well on a high-quality kibble or fresh food service such as The Farmer’s Dog. Low quality or store-brand foods are not always nutritionally complete, and neither your Westie nor Westiepoo will thrive on these. Always feed them the best quality food that your budget allows.

Both have a healthy appetite, sometimes too healthy. Keep them trim with exercise, and do not overfeed them. Otherwise, they’ll become porky pups prone to additional weight-related health problems.

They both need brushing several times a week, if not daily. This prevents matting and removes dead fur in their coat. The Poodle influence in the Westiepoo might make their coat grow faster than the Westie, making grooming a more regular requirement.

It’s important to brush all dogs’ teeth, especially smaller dogs with more compact mouths like these guys. Brush their teeth several times a week with a doggy-specific toothpaste. Considering that they both need daily grooming and regular teeth brushing, it’s wise to get them used to their grooming regime from a young age. They might be small, but they are also wriggly and will make a dash for it should they want to avoid your grooming attempts.

The average starting price for a well-bred puppy is around $1,000, unless you are looking for an award-winning breeder. In this case you should expect to spend several thousand dollars. The cost of adopting either pup from a rescue shelter is likely to be much less.

The importance of working with a reputable breeder is essential for both these breeds. A responsible breeder screens for common health concerns and takes care of their puppies. All dog breeds are at risk of being exploited by puppy farms. But you’ll find that Poodle mixes are increasingly at risk because of their popularity. Always research your breeder and be aware of the tactics used by irresponsible breeders.

There are also additional costs to consider when welcoming a puppy into your life. You have to set up your home with everything a puppy needs. In addition, there are ongoing expenses such as food and pet insurance. Considering their similar size, lifespan, and health concerns, the Westie and the Westiepoo are likely to cost the same across their lifetime.

These two dogs are very similar, primarily because the Westiepoo is half Westie, and Poodles and Westies have relatively similar characteristics. They are both family-friendly and small enough to fit into most homes while also being playful and active to provide lots of fun. They get along well with children and when socialized well, other dogs too. Oh yes, and it doesn’t hurt that they’re as cute as buttons!

The Westie is a purebred dog, and the Westiepoo is not. This is not a problem unless you want to show your dog. The AKC and other traditional canine registries do not recognize the Westiepoo as an official breed, meaning they cannot compete in official AKC competitions whereas the Westie can.

The Westie is slightly smaller than the Westiepoo, and they can be a bit more stubborn too. Westies are a bit more independent than the sometimes anxious Westiepoo, so be sure to consider this in your decision.

Ultimately, there aren’t many differences between these sweet pups. Either one is guaranteed to be a fantastic Fido and put a smile on your face.

Health Disclaimer: The information provided through this website should not be used for diagnosing or treating a health problem or a disease. It is not a substitute for professional care. If you have or suspect you may have a health problem, you should consult your health care provider.