In this article, we compare the differences and similarities of the Silky Terrier vs. the Yorkshire Terrier. We compare grooming needs, temperaments & more! 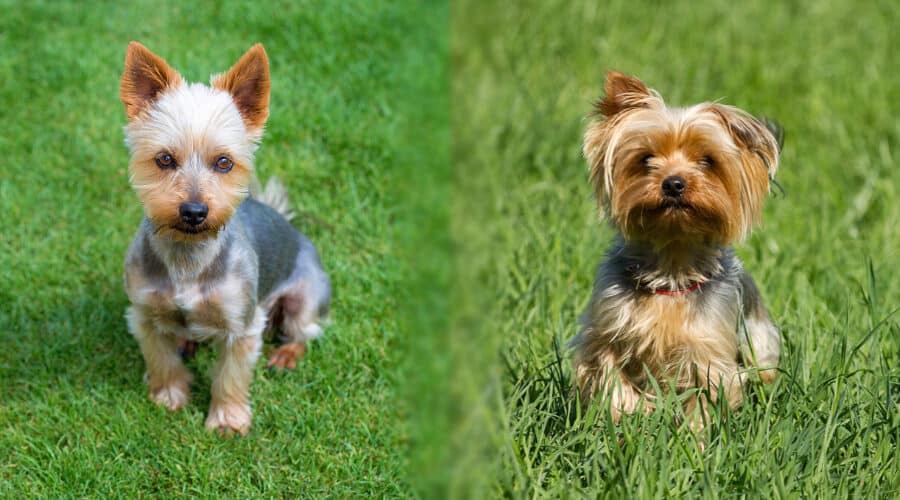 Comparing the Silky Terrier vs. the Yorkie for your next family pup? You’d be forgiven if you were to mix up these two terrier breeds, or even assume they were the same dog breed. Not only do they look very similar, but they are also very alike in temperament. And it is this misconception that often sparks the Silky Terrier Vs Yorkshire Terrier debate.

This has a lot to do with the fact that they are closely related. The Yorkie Terrier played a big part in the creation of the Silky Terrier. The Yorkie is essentially the parent of the Silky. With that comes many similarities, but it also welcomes subtle differences from the other parent. The differences between the two breeds are subtle. The Silky Terrier is much more curious and has a higher prey drive. Silkies will need more exercise every day compared to the Yorkie.

The Yorkshire Terrier is daintier than the Silky Terrier and more likely to fit in your handbag. So, it really depends on what you want from a dog. So, let’s take a closer look at how similar they are, and more importantly, the very subtle differences between them.

Delving back into a dog breed’s history is important. It helps potential owners understand much more about them and what they are likely to be like as family pets. In this instance, it will also help to explain exactly why they are so similar. This is largely due to the fact that their histories are entwined with one another.

The Silky Terrier’s history is not as clear cut compared to the history of most other pedigree dog breeds. The story varies depending on who is telling it. However, the most common theory is that his parents are the Yorkshire Terrier and the Australian Terrier. There are a few other unconfirmed small Terrier breeds thrown into the mix.

He was created in Sydney, Australia, in the early 20th century. It was believed that he was bred to be slightly bigger than the Yorkshire Terrier so that he could exterminate the slightly larger vermin over there. He is one of the largest dogs in the toy breed group. He is much more popular in Australia than in America, and in 2020 he was ranked as the 112st most popular dog breed in America by the American Kennel Club (AKC).

The Yorkshire Terrier originates from 19th century Victorian England, and it was believed that the working-class weavers of Scotland bred them from their feisty Scottish Terriers, who are now extinct. They were then commonly used in the mines in Yorkshire to exterminate the rats and other vermin, where they were then renamed as the Yorkshire Terrier.

Despite their vermin-hunting origins, they quickly became lap dogs for the upper class ladies of England, and their popularity as a lap dog has stuck ever since. They came to America in 1870, and they have secured many famous roles in films, and Audrey Hepburn’s pup, Mr. Famous, is undoubtedly the most famous Yorkie of them all. In 2020 he is ranked as the 10th most popular dog breed in America, by the AKC. Because of this breed’s popularity, it’s become common to mix the Yorkie with other breeds, and even create a teacup version of the breed.

Comparing the Silky Terrier vs. the Yorkie’s appearance can be a challenge because they are difficult to tell apart. The Silky Terrier and the Yorkshire Terrier are very similar in appearance. The Yorkie looks like the daintier version of the Silky. According to breed standards, the Silky measures between 9 to 10 inches. They weigh around 10 pounds, although they can be bigger than this. The smaller Yorkie officially measures between 7 and 8 inches tall. Yorkies weigh around 7 pounds, but they are also known to be smaller.

The Silky tends to have a squarer face than the Yorkie. Yorkies have more of a domed shaped skull, with bigger eyes, and a slightly bigger nose. The Yorkie has button-like features and much smaller eyes. While these features are not instantly obvious, for those that are looking for differences can quickly make the distinction.

The most instantly obvious appearance difference between the breeds is their ears. The Silky’s ears are pointy V shaped ears that are set high on his head. This gives the appearance that they are much larger. The Yorkie’s ears are a little smaller. They are set slightly further down the side of his head, giving them a smaller appearance. The Yorkie’s ears also typically get covered by his long hair.

They both have the same long and silky coat. Their coats are often tied up above their eyes if they sport a natural coat. They also share similar colorings, with the black and tan being the most common color of them both. However, according to breed standards, the Yorkie only has 4 recorded coat colors, whereas the Silky has 13 color variations.

Both the Yorkshire Terrier and the Silky Terrier are toy dog breeds. They are beautiful and somewhat elegant in their demeanor. Their true Terrier characteristics shine through making them both feisty and playful. There are slight differences in their temperaments.

The Silky is much more curious than the Yorkie. The Yorkie could easily laze about with his master for most of the day, enjoying the luxury of his lap. Silky Terriers are much more restless. Remember, that bored Terriers are destructive Terriers. This means you’d do well to invest in a variety of toys to keep their minds occupied.

The Silky is also much more independent. This means they can be left alone for longer periods of time without feeling overly anxious. Yorkies are more likely to suffer with separation anxiety. For this reason, it is a great idea to crate train both breeds to alleviate any type of anxious behavior.

Because the Yorkie is super tiny, some argue that he is not a suitable pet for families with small children, because they often treat him as they would their cuddly toy. However, we say that this is down to personal preference, and whatever you decide just be sure to supervise children and dogs when they are around each other.

Other household pets are hit and miss with both the Yorkie and the Silky. Good luck if there are pet rodents in the house, given their ratting background! However, if they are socialized well as pups and the other animal is bigger than them, they might not feel threatened. Again, this is down to personal preference. Just be sure to have a controlled pre-meet with all household pets before you commit to anything.

Whilst this might not seem like a lot, it can be the difference between an inactive and active family. If you and your family are a little more energetic then you may prefer the Silky over the Yorkie. The Yorkie tends to tire quicker. If you are after a house dog, then the Yorkie might make a better option for you.

Being more curious the Silky would also prefer a variety in his exercise routine. The Yorkie would be happy with neighborhood walks and a little romp in the garden. The Silky would make a great running partner and would enjoy playing interactive games such as fetch and tug of war. They also make great participants in agility courses.

You can be sure that if you have a garden both breeds will make the most out of it, however as a word of warning, make sure that your garden fencing is reinforced and high. If they catch sight of a mouse, or cat for that matter, they will be off quicker than anything, particularly the Silky!

The Yorkshire Terrier tends to be more protective over his master, mainly because he is more of an anxious pup, compared to the Silky Terrier who is generally more easy-going and too busy chasing the squirrels. The key to limiting protective behaviors is socializing them both well as a pup, in a variety of unfamiliar situations with animals of all shapes and sizes, and ensuring that such protective behaviors are discouraged.

The Silky is a little easier to train, as he is more reward focused and eager to learn compared to the Yorkie. If the Yorkie is not in the mood for a training session, you can be sure that he will not be participating in the training session. End of!

Remembering that both breeds would benefit from having a crate in their house, particularly the more anxious Yorkshire Terrier, you will find much use from crate training them both as a puppy. Certain crates that are made for anxious dogs can help calm your pup.

When comparing the Silky Terrier vs. the Yorkie when it comes to health, both the Silky Terrier and the Yorkshire Terrier can live up to the age of 15 years. Diabetes and hypoglycemia are common in smaller dogs such as these, which we will discuss further in the nutrition section as good feeding routine can help to balance sugar levels.

Both the Silky and the Yorkie are known to suffer from eye conditions and regular eye infections, so it is important to regularly check the condition of their eyes. Luxating Patella is a common issue in the Yorkie, which is essentially a dislocated kneecap, and something that breeders will check for before breeding their pups.

They would both do well on a high-quality diet that consists of dry kibble, as they are both known to suffer with periodontal diseases, and dry kibble pieces can help to break down plaque.

In regards to hypoglycemia, smaller dogs should be fed their daily food allowance across three or more different sittings, so to balance their sugar levels throughout the day.

When comparing the grooming requirements of the Silky Terrier vs. the Yorkie, they are practically the same when it comes to their grooming needs. They will both need brushing most days to ensure that their beautiful silky locks do not become tangled, and to brush out any dirt that they have swept up on their walkies.

Their eyes will need regular cleaning, as will their teeth, which should be done at least once a week with the correct doggy products. Both breeds should be bathed once every 8 to 12 weeks with all-natural dog shampoos to ensure that their beautiful silky locks are well cared for.

The only difference is that the Yorkshire Terrier is considered to be a hypoallergenic dog, whereas the Silky is not listed as one. Therefore, the Yorkie will shed much less than the Silky for sure, so if dog hair is a deal-breaker for you then the Yorkie might be the better option. The Silky is a low shedder throughout the year.

The cost of a Yorkshire Terrier starts from around $800 from a reputable breeder. The Silky Terrier starts from around $1,000. This is purely down to the fact that the Silky Terrier are rarer. Sikly Terrier Breeders can charge more. There are more Yorkie breeders, which drives up the competition. This will generally mean your costs as a potential dog owner will end up being slightly less.

Other costs, such as insurance, cages, harnesses etc, are all about the same. The only real price difference is the ½ cup of extra food that the Silky eats extra every day.

When comparing the Silky Terrier vs. the Yorkie, you’ve likely found that they are extremely similar. There are only a few differences between them, with the Silky being the most energetic out of the two, which is often the deciding factor for most families when it comes to deciding between the two breeds.

What you can be sure of, is that whoever you choose, you will find a spunky little toy Terrier on your hands, and he will be full of love, laughter and fun.