Comparing the Shiba Inu and the Akita as a potential canine companion? Both breeds look very similar, but they differ in a number of ways. Read on and find out how both breeds stack up against each other as family pets. 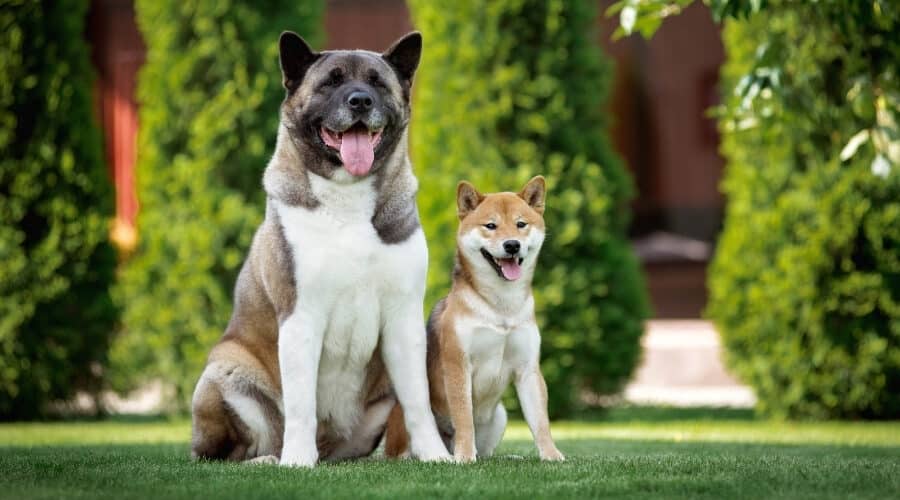 Considering the Shiba Inu vs. the Akita for your next furry friend? Both breeds can make excellent family dogs, but have some significant differences, despite coming from the same country of origin.

The Shiba Inu and the Akita are often thought of as siblings outside of their homeland in Japan, but they are their own distinct breed. One breed is ancient, and the other is relatively new in comparison. And now, they are both becoming increasingly popular outside of Japan.

You might be wondering if their personalities are as similar as their looks? Or maybe you are curious about which one would make a better family pet for your family. Whatever your reason for being here, after reading this breed comparison guide, you’ll know everything you need to know about the Shiba Inu and Akita’s similarities and differences. So, let’s get started and say Konnichiwa to these beautiful Japanese canines.

Looking into the Shiba Inu and the Akita’s pasts will not only help you to understand more about their personality. But it will also teach you about their differences. A dog’s history will often tell you a lot about what you can expect from them as a family pet too. It’s an incredibly important part of your doggy research.

The Shiba Inu is an ancient dog who is believed to originate from 300 B.C. Back then, he was used for flushing birds and other game for his master. The larger Shiba’s were also used for hunting wild boar, earning his keep by bringing food to the table. They are the smallest of the six original Spitz-type dogs.

He was never seen outside of Japan until the 1950s. And when an American military family brought one back to America, our love affair began. The Shiba Inu is to the Japanese what the Labrador is to Americans – their most popular family dog.

The Akita was developed in the 17th century, and he is the largest of the Spitz-type dogs. His creator, a banished aristocrat, spent his days on a northern Japanese island, creating a large and versatile hunting dog.

Over several decades the Akita was developed. He was powerful enough to hunt wild boar, deer, and the fearsome Yezo bear. Some families in Japan still use him for this purpose. Because of their nature, they are sometimes thought of as more dangerous than they actually are.

The Akita was only allowed to be kept by imperial families and their court. This law ended, and since then, he has been employed by families across the world as the family protector and cuddly companion.

He is described as the most loyal dog breed, and this was highlighted by a famous Akita named Hachiko. He waited every day for nine years for his owner to return. Akitas are popular guardian breeds, often drawing comparisons to Pitbulls and other dogs with guardian instincts.

The Shiba Inu and the Akita are similar in their appearance, mainly because they are both Spitz-type dogs. They have similar features, with a foxy-shaped head and pointy triangle ears. Along with their deep chest and curly Catherine-wheel tails. Even though they both come from the spitz family, both the Shiba Inu and the Akita are sometimes compared to a Siberian Husky, due to their wolfy looks.

The most obvious difference between them is their size. The Shiba Inu is a small-sized dog compared to the Akita, who is large to a giant-sized dog. And it is this size difference that is the deciding factor between the two breeds. The Akita needs lots and lots of room and is not suited to apartment life. Whereas the Shiba Inu could happily live in an apartment.

They both have a thick and dense double coat that keeps them warm in the winter and resists water. The Shiba Inu has four coat color options: black and tan, cream, red, and red sesame. The Akita has many more coat colors, including brindle, black, red, fawn, and silver, with a black and white facial mask.

All Shiba Inu’s look the same. Compared to the Akita, who has two distinct looks. In some countries, they call one look the American Akita, and the other the Japanese Akita. The Japanese Akita is more similar in appearance to the Shiba and looks like his big brother. The American Akita is squarer in appearance and looks a lot thicker and stockier.

The Shiba Inu and the Akita are both similar and different in their personalities. They are both livewires and lots of fun. If you are looking for a gorgeous fluffy dog to keep your family entertained, they are both up to the job. They are both silly and goofy and aren’t afraid to get down and dirty.

They are also both suspicious and aloof of strangers. And they will alert you whenever there is someone at your gate. The Shiba Inu is more of a watchdog compared to the Akita, who is also a guard dog. Akitas are well known to be very protective of their family, and they are more dominant dogs.

Another big difference between the two breeds is that one is more sensitive than the other. And you might be surprised to learn that it is the big burly guy that is sensitive! The Akita hates to be left alone, whereas the Shiba Inu is more independent.

When you do spend time with them, you’ll quickly learn that they are both snuggle bugs, and they are very affectionate with their family. They love to spend time on the sofa with their loved ones, and they both make fantastic canine hot water bottles. You’ll just need a bigger sofa for the Akita, compared to the Shiba, who will happily squeeze himself onto your lap.

Another surprising fact is that they both require the same amount of exercise. Both Shibas and Akitas require 60 minutes of exercise every day, and they have lots of pent-up energy that they need to burn. If you cannot meet their exercise needs, they will both become destructive and problematic.

They are both very intelligent dogs, which means that they need more stimulation than just a walk around the block to keep them invigorated. Try to mix up their activities. Otherwise, they will quickly become bored. They will both join you for any physical activities, and both breeds have excellent endurance.

As a pup, because the Akita is a giant breed, we would advise against any strenuous activities that will impact his joints as he is developing. If you are looking for a jogging partner, you need to wait until he is at least 12 months old. The Shiba, however, can start after six months or so.

They both need to be kept on a leash because of their high prey drive. And you can be sure that neither will take mercy on a squirrel or your neighbor’s cat. Being a giant and muscular dog, the Akita should be leash trained at an early age to ensure that he is manageable for you during walkies.

When it comes to doggy parks, if the Shiba Inu is socialized well, there shouldn’t be any issues with him socializing with other dogs. The Akita, however, might be agitated by other dogs, even if he is socialized well. This is specific to each Akita, so be sure to introduce them to other dogs early in their life.

Both breeds are headstrong dogs that need strong masters to show them the way. If you are a meek and mild dog owner, these dogs are not your ideal dog breed. This can make training difficult.

On the one hand, the Akita is easier to train because he is loyal and eager to please his master. Compared to the Shiba Inu, who is independent. The Shiba does things on his time schedule, not yours. But, the Akita is a dominant dog who might feel the need to challenge you as the pack leader. Whereas the Shiba isn’t overly dominant and happier to join the ranks. Either way, you need to be an experienced dog owner.

They both need early socialization to ensure that they grow up to be polite and pleasant dogs. This is especially true of the Akita. Because he can be very protective of his family, his socialization is a lifelong commitment ensuring he remembers to always be polite.

The most effective dog training technique to use is positive reinforcement training. Thankfully, they are both motivated by objects, praise, and food. So use all three to encourage them to join you in training sessions. For the Shiba Inu, keep his training sessions short and fun to prevent him from becoming bored.

The Shiba Inu lives a little longer than the Akita, but that is simply to do with his size rather than his health. For a giant dog breed, a 10 to 13-year lifespan is very healthy. If you seek a giant dog breed to be around for a long time, the Akita has one of the longest.

They are both prone to hip dysplasia, an abnormal formation of the hip joint that can cause mobility issues. They both suffer from various eye conditions, with multifocal retinal dysplasia and cataracts being the most common concerns. The Shiba Inu is also prone to patellar luxation, which is an abnormal formation of the kneecap. And the Akita is prone to hypothyroidism, which is an underactive thyroid.

The Shiba Inu eats less than the Akita, and as such the Shiba’s monthly food bill will be much lower. This is something that you need to consider if you are taking on the Akita. The Shiba Inu will eat around two cups a day, compared to the Akita, who will consume approximately four cups. Always feed your pup the best quality food that you can afford. High-quality kibbles will provide a well-balanced diet that will meet all of their nutritional needs.

The Akita should eat dog food formulas designed for large or giant breed dogs. This is especially important during puppyhood, as it will help to control his rapid bone growth. The Akita is also prone to a condition called bloat. It is a life-threatening condition that you need to make yourself aware of. Never feed him immediately before or after exercise.

Both breeds have double coats, and they both shed moderately throughout the year. They also both shed profusely during the shedding seasons. With his larger body, the Akita’s shedding is much more noticeable than the Shiba’s.

Both the Shiba Inu and the Akita need to be brushed two to three times a week throughout the year. To keep control of their shedding during the shedding seasons, you should brush them most days. They both need bathing once every 8 to 12 weeks and be sure to use a conditioner that will keep their coats feeling soft and lush.

The Shiba Inu and the Akita find themselves in the top 50 dog breeds. So they aren’t rare, but they aren’t common either. To find a reputable breeder, you may have to travel to find one. But trust us when we say it will be worth it when you find your healthy pup. The price for both of these guys starts at around $1,200.

The Shiba Inu and the Akita are both wonderful dogs who would make fantastic family pets. They are quite similar, but their differences mean that they need a different type of family and home environment. If you are thinking about welcoming one of these guys into your life, just be sure that you can meet their needs. If you can, you can be confident that you will have many happy years to come with either of these gorgeous Japanese dog breeds.