Sheepadoodle vs. Goldendoodle: What’s The Difference?

Are you comparing the Goldendoodle and Sheepadoodle as your next canine companion? These two mixed breed pups may look somewhat similar, but they have many differences. Find out what you can expect when adopting either pup! 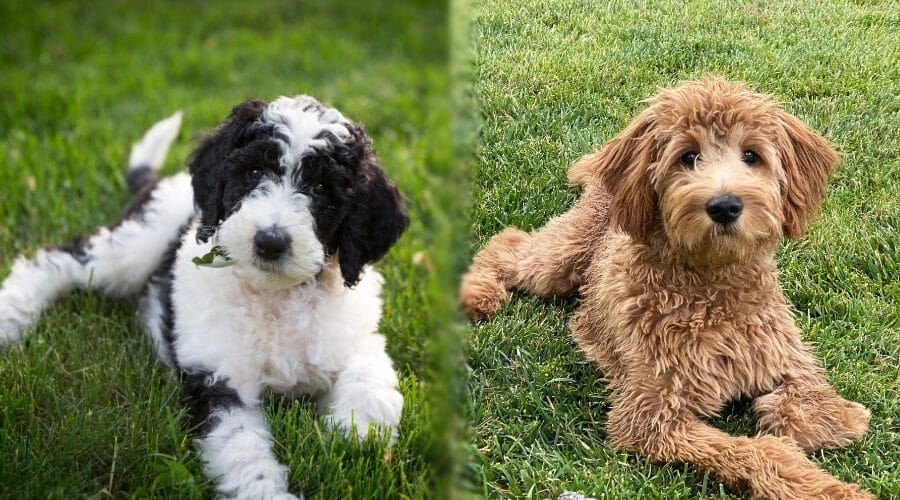 Comparing the Sheepadoodle vs. Goldendoodle as your next family companion dog? You’ve probably seen pictures of sweet, fluffy black and white or tan dogs all over social media, some gently cuddling with babies or doing silly tricks. After looking at these photos, you probably imagined having an adorable, fluffy companion just like that yourself, which is why you’ve landed here.

There is a good chance that you were looking at one of these two teddy bear looking pups when you were browsing these photos. Both dogs are similar in their shaggy appearance, though their coloring tends to differ. They are very popular, gentle dogs and make great family pets.

Beyond their appearance, these fluffy pups have many other similarities. However, you should also be aware of a few differences between these mixes when deciding which is the most suitable four-legged addition to your family. Read on ahead for some information on both dogs and a breakdown of their similarities and differences to help you make a better-informed decision.

Both of these canines are Poodle hybrids or crossbreeds. There are more than fifty Poodle crossbreeds on the market today. Breeders have crossbred poodles for their variety of desirable characteristics, such as hypoallergenic coat, intelligence, and friendliness, which both doodles have been lucky to inherit.

Neither dog has made it into the American Kennel Club nor the Westminster Kennel Club. Since they only recognize pure breeds and consider both the Sheepadoodle and the Goldendoodle “mixed breed” dogs, they haven’t made the cut. However, these prestigious organizations do recognize the Poodle, Golden Retriever, and Old English Sheepdog.

The Sheepadoodle is part Old English Sheepdog and part Poodle. There is some speculation that the United States Army has bred them since the 1960s as a working dog. However, more likely, the Sheepadoodle began being bred in the 1990s or later, as the Doodle’s popularity grew.

It is undeniable that both of these two pups are adorable clouds of fluff. However, beyond their cuteness and silly teddy bear appearance, there are several factors you should also consider, including coat color, coat type, and size, if the appearance is important to you.

Sheepadoodles are mostly white and black or white and chocolate, but they can also be solid black or gray. Goldendoodles can be cream, apricot, red, chocolate, or black. In addition to solid colors, both doodles have coats that can come in a variety of patterns.

While coat length varies, both dogs have denser, longer coats. Both dogs also generally have longer eyebrows, mustaches, and beards, which attributes to their teddy like faces.

Typically you’ll see standard sized dogs of both dogs, as well as a Miniature Goldendoodle and a Miniature Sheepadoodle. The miniature/toy version of both these doodle hybrids are usually created from a toy-sized poodle parent and are sometimes bred down several generations to maintain their smaller size.

Many of the early Poodle mixes were bred to be service dogs due to their kind and calm disposition. Poodles are also highly intelligent, proud, and active. Both canines inherited the Poodle’s temperament, making them carry the same lovable traits as their parentage.

Like the Old English Sheepdog, Sheepadoodles are gentle, intelligent, and adaptable. And like the Golden Retriever, the Goldendoodle is very friendly, smart, and loyal. Since they are social dogs, both pups usually do well with other dogs and family pets.

There is a reason you have probably seen pictures of both of these dogs with kids. They will welcome – if not demand – plenty of love, attention, cuddles, and will quickly become a member of your family.

To socialize them, help them stay active, and keep them happy, consider taking them to the dog park or on playdates with your neighbor’s dogs. Neither dog is a big barker. However, if triggered in certain situations, they will respond with a warning bark or two, as most dogs do!

Since both the Sheepadoodle and Goldendoodle are high-energy, larger dogs, they will do well in a house with a back yard so they can get exercise daily. The smaller variations of both dogs are suited for apartments or homes without outdoor space. Both dogs come from a line of hunting and herding dogs, so being playful and burning off energy outside is in their DNA.

The Sheepadoodle and Goldendoodle require about the same amount of daily activity, about 60-90 minutes of exercise broken down over several trips outside. The intensity of exercise will depend on the dog’s age and personality. As they age, both pups will likely mellow out, but will still need regular exercise.

If either one of these pups does not get enough exercise, it may become overweight and lethargic. It may also develop behavioral problems, like excessive barking, separation anxiety, or even nipping and biting.

Due to their lineage, the Sheepadoodle and Goldendoodle are both highly intelligent and trainable. Whether you plan to train your puppy yourself or enlist the help of a professional, you will find that both dogs are very motivated and eager to please.

The two mixed breeds are quick learners, and it may take as little as a few weeks to potty train your new puppy. With regular work, most Sheepadoodles and Goldendoodles should be potty trained by six months. Both dogs learn best with positive reinforcement, so providing the dog with a reward, such as a treat or a toy, for the wanted behavior is a great method.

Both of these pups are fairly healthy. You can increase the chances of bringing a healthy dog home if you purchase from a reputable breeder. The two dogs are both predisposed to certain health conditions passed down from their parentage including:

Neither the Sheepadoodle nor the Goldendoodle has any special dietary requirements other than an occasionally sensitive stomach. To keep these dogs healthy and active, look for a dog food that contains high-quality protein as the main ingredient. Avoid a lot of filler, like grain or corn, as your dog may become allergic or sensitive to these types of ingredients.

When either one of these pups is in the puppy stages, you may need to feed it smaller portions as frequently as 3-4 times a day. Your adult dog will require larger meals, about 1-2 per day. The Sheepadoodle will likely require slightly larger quantities of food than what a Goldendoodle consumes, due to its larger size.

Although it might be hard to resist their cuteness when they are begging, always avoid feeding your dog human food. Healthy dog snacks are a great way to make your pup happy while keeping them healthy!

Both dogs are popular because they are are “considered” hypoallergenic. While no dog is truly hypoallergenic, Sheepadoodles and Goldendoodles shed less which makes them perfect companions for people with allergies. Both are also quite easy to clean up after. However, neither dog is low maintenance.

When you visualize a Sheepadoodle or Goldendoodle, a silly, shaggy dog probably comes to mind. While their soft coat is among their adorable qualities, it also makes keeping them groomed rather challenging.

Both the Sheepadoodle and the Goldendoodle are high maintenance dogs that require regular grooming due to the type of coat. The curlier their coat, the more frequent grooming they will require. Without proper maintenance and grooming, their coats will become tangled and matted, in some cases requiring a full shave.

Sheepadoodles and Goldendoodles with curly coats will require nearly daily brushing. Those with straighter coats will still need to be brushed several times a week. It is not recommended to bathe your dog at home unless you are able to fully blow dry it. Towel drying a Sheepadoodle or Goldendoodle after a bath increases the chances of matting.

You will have to take your Sheepadoodle or Goldendoodle to the groomer every six weeks for a new trim or cut. The grooming fees can reach upwards of $200 per visit, depending on the type of services you require. You can help your puppy by taking them to the groomer regularly and ensuring that their coats stay healthy into adulthood.

Since both Sheepadoodles and Goldendoodles are very popular dogs, they tend to be expensive. Neither dog is surrendered frequently, but in rare cases, you might be able to find one in a shelter for around $500 or so.

The Goldendoodle tends to be a bit more expensive due to its trendiness, but on average, expect to pay a breeder about $1,200 or more for a puppy of either dog. If you are looking for a puppy with unique characteristics, such as a certain coat color or size, it can cost significantly more than the average.

Some disreputable breeders and puppy mills have tried to profit from the Doodle craze. While getting your Sheepadoodle or Goldendoodle from an uncertified seller might seem like a good idea since they are likely to offer lower prices, it is highly recommended to buy your dog from a certified breeder.

Though it tends to be more expensive and there might be a long waiting list, buying from a certified breeder guarantees your dog’s genetics and ensures that they are healthy and well-adjusted when they join your family.

Sheepadoodles and Goldendoodles make great companions. If you are ready for a four-legged friend, either one will reward you with years of cuddles and joy.

Though the Sheepadoodle and Goldendoodle are very similar, the two dogs’ key difference is the size. The Sheepadoodle tends to be bigger and weighs more than the Goldendoodle. This is an important point of consideration, especially if you live in a smaller home or apartment.

While both dogs make great family pets, they are both high maintenance. Be prepared to spend a lot of time exercising and grooming both mixed breeds. While it’s common knowledge that both dogs are big financial investments, don’t overlook that they also require a major time investment.

If you think that a smaller or lower maintenance dog will be a better fit for you, there are plenty of other Doodle variations to meet your needs. Check out our Doodle guides and comparisons for more information.