Comparing the Great Dane vs. the Saint Bernard as your next canine companion? Find out which gentle giant is the better breed for your family! 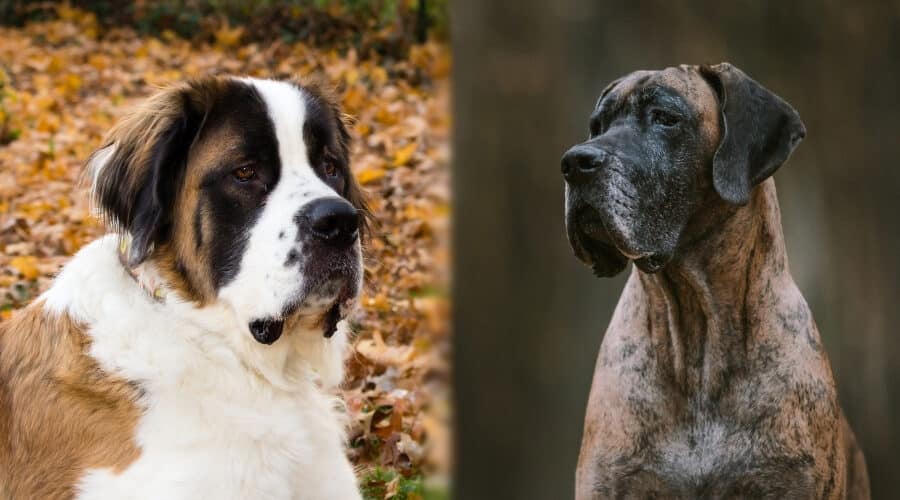 Comparing the Saint Bernard vs. Great Dane for your next family pet? Both of these majestic breeds are part of the Giant Breed Club.  Here in this breed comparison guide, we will walk through which breed is better for your family, and toss in a few facts along the way.

While both of these breeds are quite similar, they also have plenty of differences. From their personalities to their exercise and grooming needs, it’s important to understand exactly what you get before you welcome either breed into your home.

While both breeds can make excellent family companions, and guard dogs, each breed has a little more to offer over the other, depending on what your goals are. In this article, we’ll provide you with all the gentle giant 101 you need. Let’s jump straight into this canine comparison!

The best place to start your research is at the very beginning. There you will find just why their breeds were created and what purpose they served. It might come as a surprise, but this is one of the best indicators of what they might be like as family pets. Let’s take a look.

It is believed that the forefathers of the Saint Bernard started their journey in 1050. In the mountain tops of the Alps, in Switzerland. There, monks set up a hospice to help wayward travelers passing through. Over a few decades, the monks perfected the breed and created the perfect mountain dog. He searched the mountains for lost and injured travelers and carried them back.

His love for humans meant that he saved the lives of almost 2,000 men during his time there. His caring personality has lent him to recent employment as a therapy dog. He continues his work in search and rescue too. Ironically, in 2020, a Saint Bernard saw a role reversal and found herself stranded on a mountain top in the United Kingdom. It took a team of 16 men to rescue her.

Because of their size, many giant breed owners think of the Saint Bernard as their first choice for a giant breed. They also are commonly compared with the English Mastiff and compared against the Bernese Mountain Dog by many would-be giant dog owners.

The Great Dane, also known as the German Mastiff, is the second tallest dog in the canine kingdom. If you’re wondering who the first is, it’s the Irish Wolfhound. The Great Dane that we know and love today is much smaller than his forefathers were. They were larger and hunted wild boar and deer for their noble masters. They were muscular and super powerful.

In the 16th century, they were bred smaller and more slender so that they could be adopted as family pets. So beautiful and charming, he was dressed in jewels and became a chamber dog for wealthy families. He might be big, but he is a scaredy-cat. And the famous cartoon Scooby-Doo captures his sensitive and goofy side very well. Because of their size and similar looks, it’s not uncommon for the Dane to be compared with an English Mastiff or other Giant Breeds.

The Saint Bernard and the Great Dane are easily identifiable. Apart from being classed as giant dog breeds, they aren’t very similar in appearance. The Saint Bernard has many variations of the traditional Swiss dog colors, black, white, and tan. Whereas the Great Dane has seven officially recognized colors: black, blue, fawn, brindle, harlequin, mantle, and merle. Saint Bernards generally have a shorter coat, and the Saint Bernard’s coat is usually medium length, or much longer and fluffier.

They both have a big head, with the Great Dane’s being longer than it is wide, and vice versa with the Saint Bernard. They also both have huge paws, to match their gigantic bodies. Their shape, however, is the polar opposite. The Saint Bernard also has a big butt and is pretty chunky with all that extra fur. The Great Dane is muscular but much leaner than the Bernard.

These two really are the gentle giants of the giant breeds. Super loving with their family, they are never happier than when they are chilling with the pack on the sofa cuddled up. They will both forget their size and think they are lap dogs if it means a better cuddle.

They are also fun-loving clowns when there are games to be played. The difference between the two is that the Saint Bernard will tire quickly, opting to be a spectator. Whereas the Great Dane will stay on until the game ends. The Great Dane is more of a clown than the Bernard and will clumsily crash into things and knock things over if he gets too excited. They are both great with children and surprisingly gentle with smaller kids.

The Saint Bernard lives to save people, so is happy to make friends with anyone. They don’t really bark and have no prey drive for chasing animals. So if you are looking for a good guard dog, the Bernard isn’t it. The Great Dane is equally friendly with strangers because it means more friends to play with. The Great Dane is a barker, making him a great deterrent for any would-be intruders.

Both breeds are fairly laid back when it comes to other animals. They will live and let live as l0ng as the family is happy. They will toe the line and not cause problems with other pets such as cats and other dogs. Unlike many other ex-hunting dogs, the Great Dane doesn’t have a high prey drive anymore.

Neither the Dane nor the Bernard needs a huge amount of exercise. Being large dogs, high-impact exercise is not recommended. They are prone to suffer joint problems due to their weight if over-exercised. The Great Dane will need between 45 and 60 minutes of exercise every day. The Saint Bernard requires slightly less activity at 30 to 45 minutes as a minimum.

Both breeds are quite partial to napping as well. Both sleep a lot, especially as puppies. This allows their gigantic bodies to grow

Depending on the lifestyle you choose to lead, this may dictate which breed you go for. Some are mistaken in thinking that the Saint Bernard can go hiking for hours as a rescue mountain dog. This is simply not the case, and the same can be said of the Great Dane. Mild rather than wild is the key when it comes to these giants.

The Saint Bernard is an intelligent dog who is eager to please his master. Although he can have the odd stubborn or lazy day (can’t we all?), he is generally a very trainable dog. His love for mankind has led him to be a well-trained dog. The Great Dane is intelligent, but he is more interested in being silly than learning.

But, if you can turn the Great Dane’s training into a game, you’ll be sure to captivate him. And just like the Saint Bernard, they are both easily delighted with a treat in hand. They are food-focused, so be sure to bring out the Scooby snacks. This is known as positive reinforcement training, and it is the most efficient dog training method.

The key to training any dog is to start early, both with obedience training and socializing with other pups and people. That way, they learn acceptable social behaviors and don’t become a giant pain in the butt. It’s a great idea to leash train both of these guys, as they can be too much to handle if they aren’t.

Both the breeds are giant dogs, and as such, they both have a shorter lifespan than other dog breeds. The Saint Bernard can live up to one year more than the Great Dane, on average. The key to good health in these accelerated agers is a good balance of quality food and the right amount of exercise. They will both gain weight quickly if overfed and under-exercised.

They are both prone to hip and elbow dysplasia. If, as a puppy, they bound around too much too early or grow too rapidly, it can exacerbate hip and joint problems. This is why you should try to keep their exercise mild and not wild. The right nutrition can help here too.

They should both be screened for eye conditions, particularly cataracts, progressive retinal atrophy, and entropion. As well as cardiac concerns, such as dilated cardiomyopathy. When it comes to their health, it’s important to keep up to date with their veterinary checks.

On average, the both breeds will eat roughly the same amount. Saint Bernards will consume about four to eight cups of food per day, and Great Danes eat about four to six cups a day, depending on their size. Both of them are prone to becoming overweight, so it is vital that you read the package instructions and do not overfeed them. Unnecessary weight will cause major issues for their joints, cardiac system, and lead to other health conditions.

Although they eat more than the average dog, they also need quality food as well as quantity. Both will need a high-quality kibble that provides them with a well-balanced diet. Their kibbles should also be specifically labeled as large breed dog food. These kibbles will contain optimum nutrition to control their rapid bone growth as a pup.

As giant dog breeds, they are both prone to bloat. So if you are about to welcome either of these guys into your life, you need to research it and be able to recognize the symptoms. It is a life-threatening condition and needs immediate treatment. Bloat is the number one killer of the Great Dane, so you need to take extra care with him.

Their grooming routines are dictated by coat types and lengths. The Saint Bernard can have both a short or long-haired coat. If he sports the longer coat, he will need two or three grooming sessions a week to remove the loose fur. And most days during the shedding seasons. If he opts for the short coat, he will need grooming once or twice a week.

The Great Dane’s coat is much less intensive. His coat is short and sleek and will only need brushing once a week to keep him looking healthy and shiny. They both shed, but the Saint Bernard will shed more, and it will be more noticeable too. This means they will be more demanding when it comes to grooming.

The average price of a Saint Bernard and Great Dane puppy from a reputable breeder is about the same. At $1,500 for a well-bred pup, it’s a great price to pay in return for a healthy and happy puppy. If you are in the market for a pup instead of a rescue, be sure to read up on backstreet breeders and puppy mills.

So, there you have it. Two larger than life, giant breeds laid out for your consideration. They both make fantastic family pets, but their differences and personality quirks are what set them apart from one another. Which is what helps families decide between the two.

If you are after a clumsy canine clown full of beans, the Great Dane is the one for you. But you need to be able to offer him the exercise and attention that he needs. Otherwise, he can become problematic. If you’re after a more laid back dog to join you on casual strolls and lots of sofa cuddles, the Saint Bernard might be the better option. Whoever you decide to choose, you are in for lots of love, cuddles, adoration, and fun!