Thinking of welcoming a Saint Bernard or an English Mastiff into your home? Read up and find out what you can expect between both of these gargantuan breeds before deciding which one to welcome into your home! 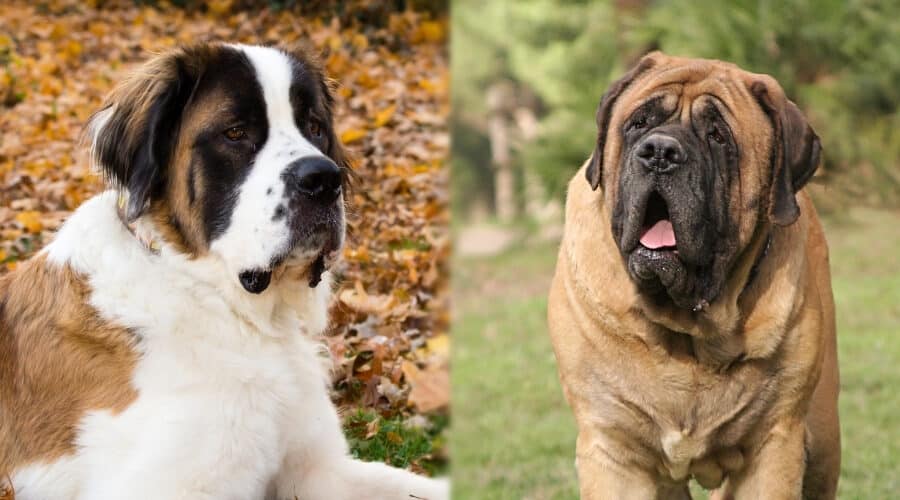 Comparing the Saint Bernard vs. English Mastiff for your next family pet? The Saint Bernard and the English Mastiff are both giant breeds, but they bring different skill sets to their families. If you are here because you can’t decide between the two breeds, or you’re just curious as to what they are all about, you’ve come to the right place.

If you are thinking of welcoming either breed in your home, you’ll want to have plenty of space. Both Saint Bernard and the Mastiff are huge, with both breeds rarely weighing below 100 pounds when fully grown. Both breeds are excellent with families and do well with children if socialized early. These pups can make a great addition to any family if you have space.

From their history to their personality and their temperament, and their training and grooming needs, there’s plenty of factors to consider. So, carry on reading to find out all the juicy doggy details.

Looking at a dog’s history is a fantastic way to understand what he will be like as a family pet. Knowing where he comes from and what his breed purpose was is one of the best eye-openers into whether he is the right dog for you.

The Saint Bernard’s history started in 1050, where a monk in the alps of Switzerland set up a monastery for wayward travelers. Over many years, he created a canine from local dogs and Molosser dogs who would later specialize in human rescue. Those who had lost their way would welcome the sight of a Saint Bernard. Contrary to urban myth, this guy did not carry a barrel of liquor around his neck.

It is believed that the Saint Bernard has saved approximately 2,000 lives in the alps. He also found employment in dairy farms, guarding the estate, pulling carts, and herding the precious cattle. His dedication to humans is one of the reasons why he is now very popular as a family pet too. He is known as a nanny dog, and he adores children. He was the star of the big hit film series, Beethoven.

The Mastiff, also known as the Old English Mastiff, has a more brutal history. His ancestors were used to defend the British Isles against the Roman invasion. So impressed, they took him back to Rome, where he was used in the ring to fight lions and gladiators. Thankfully, he is not the same fighting machine as he once was.

English aristocracy favored him to protect their estates. But the World Wars and food rations meant that families could no longer afford to feed him. He nearly became extinct, but thankfully Americans, with their healthy Mastiff stock, shipped their dogs over to save the Mastiff population. He found popularity in the famous film, The Sandlot. Because of the Mastiff’s guardian abilities, they are often compared to Pitbulls or other guardian breeds.

These guys are easy to tell apart in a crowd. The Saint Bernard sports the traditional Swiss colors that are variations of white and brown. Compared to the Mastiff, who wears a solid apricot, fawn, or brindle coat, with a black mask.

They both have the choice of short or long coats, but the long-haired Mastiff coat is the rarest of them all. Believe it or not, many people believe the Fluffy English Mastiff came from adding in a bit of Saint Bernard back in the 1900s to save the breed. Saint Bernards will always have a thick fluffy coat due to their breeding for cold weather rescue missions.

But if you take their jackets off, they are similar in their appearance in that they are both big dogs, with deep chests, big paws, and gorgeous eyes. They are both considered to be extra-large or giant dog breeds. They both have droopy jowls that produce lots of doggy drool. Saint Bernards are often mistaken for Bernese Moutain Dogs, another fluffy swiss dog breed that looks similar.

Their temperament shares both similarities and differences. They are both loving and affectionate with their families. They are both described as gentle giants, and you couldn’t do much better for a family pet if you are seeking a giant breed. Expect to share your sofa with these guys, and when we say share, we mean they both get the best seats in the house.

Saint Bernard is friendly with everyone, and his dedication to humans is what makes him such a pleasant pooch. Although he would protect his family if he had to, his size is enough to put people off, and so he knows he rarely has to do any protecting. Unlike many big dogs, he is happy to let visitors walk in and out, and he’ll greet them all with a tail wag and slobbery kiss.

No one would mess with the Mastiff. However, they are a bit more aloof with strangers compared to the Saint Bernard. If you are after a watchdog or family protector, the Mastiff is a fantastic option, and he has a bellowing bark. This guy would prefer the easy-going secluded country life, where he can keep his family and loved ones all to himself.

As long as they are socialized well as pups, they will both get along with other family pets. You just need to teach them both how to play with smaller animals. The Mastiff, being the more protective doggo, is more likely to terrorize the neighborhood cats. But only if he is in the mood to get his butt off the porch. For this reason, keep the yard secure.

Neither of these guys needs a huge amount of exercise. Not only because it’s not all that healthy to take giant dogs on strenuous daily exercise, but also because they both love to nap. You might have to convince both of these guys that walkies are a good idea. So, you might need to brush up on your persuasion skills.

The Mastiff needs around 45 minutes of exercise every day, compared to the Saint Bernard, who needs less at around 30 minutes. This isn’t a great deal more, but according to breed owners, the Saint Bernard is slightly more laid back. Depending on your lifestyle, this may determine which breed is better suited to you and your lifestyle.

In between exercise sessions, when they are not snoozing, they would both appreciate a bunch of indestructible dog toys to get their teeth into. Not only will this keep them entertained while you cannot play with them, but it will also keep their brain ticking to ensure that they are stimulated.

Just like all dogs, they both need to be socialized from an early age if you want them to grow into polite pooches. Because let’s face it, if they aren’t polite, they are both going to be challenging to handle. This is particularly important for the Mastiff, who is naturally more protective in nature. Socialization is the key to ensuring that he will not become too overprotective.

Thankfully, these giant guys are both driven by food, and lots of it (we’ll discuss food more later). The best way to train them is to utilize the positive reinforcement training method with plenty of Scooby snacks in hand. Get the whole family on board so that they know the kids are also in charge.

The Saint Bernard has an expected longer lifespan compared to the Mastiff. However, as they are both giant breeds, their lifespan is not as long compared to most other breeds out there. They both suffer from hip and elbow dysplasia, and they should both be tested for eye and cardiac conditions. In addition to this, the Saint Bernard should also be tested for degenerative myelopathy.

Their heart concerns, as well as their propensity to put on weight quickly, is all the more reason to persuade them to join you on walkies every day. And their joints cannot take much more weight either. They are both likely to become overweight at some point in their lives, so it’s best to keep them trim and healthy with exercise. They both need adequate rest and joint support too. Mastiffs need larger beds than the Saint Bernard in order to support their heavily impacted joints.

On average, the Mastiff will eat slightly more than the Saint Bernard. The Mastiff will consume around eight cups of food every day, compared to the Saint Bernard, who will eat around six cups a day. This is all dependent on their size, age, and energy levels. But you can expect to spend more money on the Mastiff’s food bill for sure. We always advise feeding them the best nutrition that you can afford.

Both dogs are giant breeds. Because of this, both will need a kibble that is specifically designed for either large breeds or giant-sized breeds. This is particularly important during puppyhood as it will help control the rate at which their bones grow, which can go some way to preventing bone diseases such as joint dysplasia. Nothing else will do here! You need a premium grade giant breed puppy food to keep them growing properly.

This is all dependent on the coat length. If they have a longer coat, then they will need several grooming sessions a week. If they opt for the shorter jacket, then they will need a brush once a week just to keep them looking smart and shiny. They both shed all year moderately, and heavier during the shedding seasons.

The Mastiff should be bathed once every 8 to 12 weeks or so, and the Saint Bernard should be bathed every 12 to 16 weeks. This is because the Saint Bernard has an oily and water-resistant coat that needs less washing. Otherwise, you risk ruining his natural coat oils. Both breeds are just as drooly as the other, so we can’t help you on this point.

The average price of the Saint Bernard and the Mastiff is the same. Both breeds will cost about $1,500 and up. This is an average cost for a giant breed, and with a reputable breeder, you can be sure that they will be as healthy as they can be. Unlike backstreet breeders and puppy mills will not care for the wellness of their puppies, so please do not be tempted by their sometimes lower prices.

If you are thinking about welcoming one of these dog breeds into your family, you probably already know that neither of them will be cheap to care for. Not that any dog is, but extra-large breeds need extra-large everything, which can be costly. You must be able to financially support them both for many years to come.

And that’s the end of our big boy comparison. Now you know that there are more similarities than there are differences between the two. The most common deciding factors that many families consider are that the Mastiff is larger and he is more protective. The Saint Bernard is friendly with all, and he needs a little less exercise.

Either way, whichever breed you decide to choose, know that you will fall totally in love with them both. They are both as adorable as one another, and they have a lot of love to give their family. Just be sure to invest in some steel-capped boots and an extra-large sofa, and you’ll be good to go.