Dog people love to joke around. What's better than seeing a dog smile? Here are 30+ jokes, riddles, and idioms that you can keep handy to share with your friends or next time you're at the dog park. 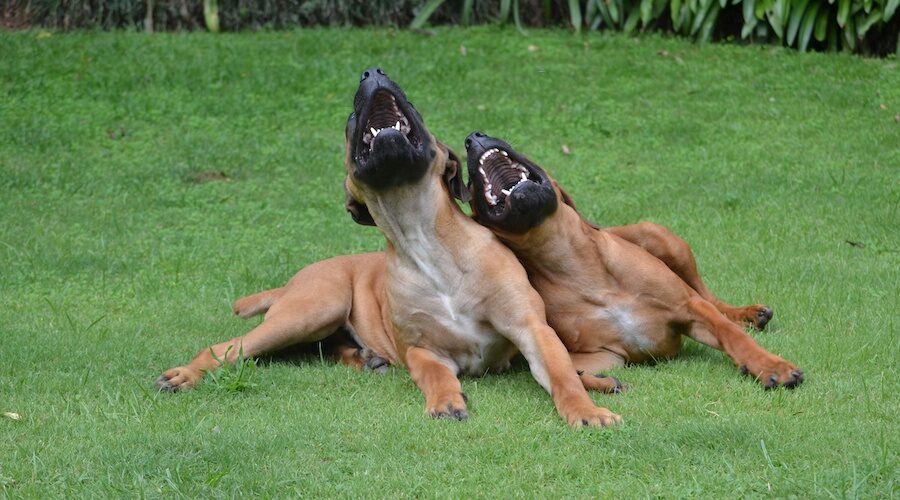 Animals do the funniest things sometimes, and your family dog is no exception! Thanks to our comical canine friends’ antics, there’s a wealth of jokes to tell about Fido and his four-legged, furry pals.

In this article, we’ve picked out some of our favorite Rover rib-ticklers that are sure to have all dog-lovers howling with laughter (see what we did there!) Also, we’ve included a selection of Rover-related riddles that’ll have everyone scratching their heads.

And to round off, how about a few idioms? What’s an idiom you ask? Read on to find out.

Dog Jokes For All Ages

So, here we go with 30 of our favorite canine jokes that are sure to make you smile.

Once you’ve stopped laughing at our selection of hilarious hound jokes, you can calm yourself down by thinking about these riddles. You can check out the answers at the bottom of the page.

We’ve included some super-simple riddles in our selection so that even young kids can join in the fun too!

If dogs have fleas, what do sheep have?
[Fleece.]

When your dog is watching a video, how does he stop it?
[He presses the paws]

I’m man’s best friend.
I have a cold, wet nose that’s always sniffing out food.
I have four legs and a waggy tail.
I chase squirrels.
I can learn how to do tricks.
What am I?
[Your dog.]

Four dogs and five kids were under an umbrella. Why did nobody get wet?
[Because it wasn’t raining.]

What animal would you ask to tell you the time?
[A watchdog.]

What’s the term for a left-handed dog?
[A southpaw.]

What do you call a dog who can’t move?
[Anything you like. He’s never going to come to you.]

What do you get if you press the mute button on your doggy remote control?
[Hush Puppies.]

What do you get if you cross a Labrador with cookie dough?
[Dog biscuits.]

What do you get if you cross a bluebottle, a motor vehicle, and a Labrador?
[A fly … ing car…pet.]

What do you get if you cross a pit bull with Lassie?
[A dog that bites you, and then goes to get help.]

A talking dog is pretty impressive, right? But what beats that?
[A spelling bee.]

Do you know what dog has bark but no bite?
[A dogwood tree]

What’s the difference between a basketball player and a dog?
[One dribbles and the other drools.]

When are yellow, black, and white dogs most likely to enter your home?
[When the front door is left open.]

What is this animal?
A TV personality was named Lassie
A film star was called Toto, A mystery-solving creature was called Scooby Doo
A cartoon character was named Pluto
[A dog.]

A man insists that his dog can jump right over his house. He’s right. But how is this possible?
[The dog can jump over his dog house.]

A dog is sitting on one side of a river, and his owner is standing on the other bank. The woman calls the dog, and when her pet reaches her, he’s dry. How did the dog cross the river without getting wet?
[The river is frozen.]

A boy, a dog, and a horse crossed a bridge. The boy rode across the bridge, yet he walked. How come?
[The dog’s name is, “Yet.”]

So, what’s an idiom? Every language has its very own collection of pearls of wisdom. These often come in the form of proverbs and idioms, which offer advice on how you should live your life and give ideas on the ideals, principles, and values of a particular society.

Generally, short, snappy sayings are called “idioms,” and longer phrases are called “proverbs.” Idioms and proverbs are figurative. That means that they create word pictures rather than being taken literally.

So, here are a few canine-inspired idioms with which you can impress all your friends!

No-one knows the origins of the idiom “Raining cats and dogs,” but it’s thought to have first appeared in the 17th century in London, England. In those days, the city’s streets were often awash with dead animals following heavy rain, thanks to the lack of a proper sewerage system. For that reason, it’s assumed that the idiom refers to those unfortunate creatures.

“Meaner than a junkyard dog” is a U.S. idiom that was coined to refer to the guard dogs that were used to patrol wrecked auto lots, which were targeted by night thievery. Junkyard dogs were traditionally Dobermans or German shepherds that were trained to be intimidating and potentially dangerous to intruders.

The idiom, “in the doghouse” is first seen in print in 1926 in the glossary of the language of criminals, Criminalese, written by J.J. Finerty. The phrase first appeared widely in common parlance in the U.S. in the 1930s.

So, someone who is said to be “in the doghouse” is left out in the cold, not welcome.

The well-known idiom, “let sleeping dogs lie” was first used in print in Geoffrey Chaucer’s play, Troilus and Criseyde, circa 1380, when he wrote, “It is nought good a slepyng hound to wake.”

The phrase has long been used in common parlance in the U.K. and the U.S. since the 1800s to refer to the fact that it’s usually better to let things be, rather than take action.

Dogs do not generally eat dogs!

It’s thought that this idiom came from the second Oxford English Dictionary of 1858 that contains the proverb, “Dog does not eat dog.” The modern phrase came into use in 1931 and is thought to be a play on the words of the older expression, meaning that the world had become so vicious that a metaphorical dog would now actually eat another metaphorical dog.

The expression, “dog days of summer” is celestial in origin. The idiom refers to the period between July 3rd and August 11th when Sirius the Dog Star rises at or near the same time as the sun in the Northern hemisphere. This period is always associated with hot, sultry summer weather.

“Going to the dogs” is an interesting idiom in that it has uncertain origins. There are several possible sources for this phrase, which is used to refer to something that’s on a downward slide or is deteriorating.

One popular and plausible theory is that the phrase refers to the 16th-century practice of throwing spoiled or rotten food that was no longer fit for human consumption to the dogs. Another idea is that the origin of the idiom is from the Dutch phrase, “toe goe toe do dogs,” which translates as “money gone, credit gone, too.”

Another widely accepted theory regarding the origins of the idiom is that it refers to the practice of going to dog racing to bet on the result. Many times, bettors would lose their money and come home destitute.

We hope you’ve enjoyed our selection of rib-ticklers, mind-bending riddles, and fascinating idiom related dog facts. There’s no doubt that dogs have been a source of entertainment and amusement to people for hundreds of years, and your four-legged furry friend has even inspired proverbs that are in widespread use still today.

But at the end of the day, your canine companion is indeed man’s most faithful best friend, even if he’s sometimes the butt of our jokes!

hello. i love dogs. but i dont like the jokes you made. sorry. mabey add some riddles to this.

Super cool rib ticklers me and my pawsome furry friends that has has four legs and is not a horse really good enjoyed this website.

I enjoyed your stuff, sent some riddles to grand daughters, and then read your info stuff, very informative and enjoyable, stay healthy!

Why Do Dogs Sit, Sleep, Or Lay on Your Feet? Here Are 8 Reasons!

Why Is My Dog Pawing At Me Constantly? What Does It Mean?

How To Take Care of a Dog: Age-Appropriate Dog Duties For Kids & Teenagers