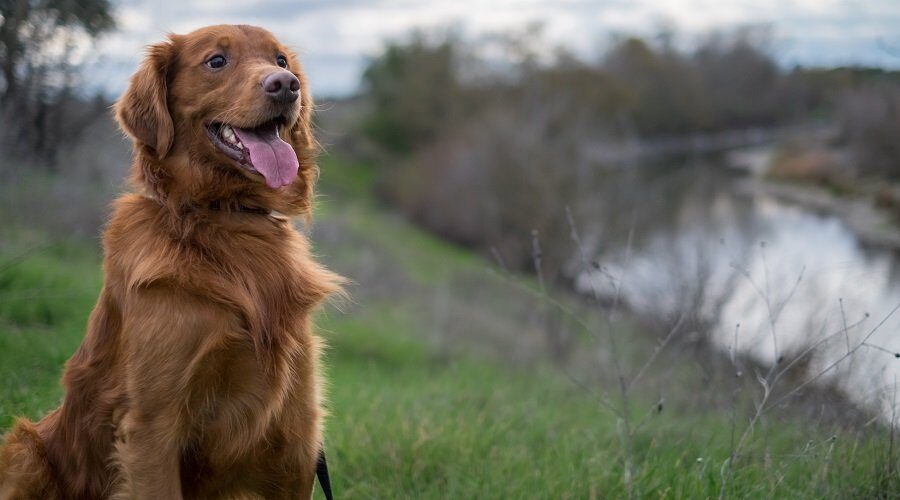 Despite having a few differences compared to the Golden Retriever, he is just as friendly, sociable and a pleasure to be around! They make for a wonderful family pet, or a meticulous hunter and retriever in the field.

The Golden Retriever’s journey began in the Scottish Highlands of Great Britain in the mid-19th Century. The clever nobleman, Dudley Marjoribanks, also known as Lord Tweedmouth I, desired a gun dog with the qualities of the ‘then’ Golden Retriever, the now extinct Tweed Water Spaniel, the Irish Setter and the Bloodhound. Across 50 years he meticulously engineered the perfect gun dog who we now know as the forefathers of the Golden Retriever that we love today. Not only did his canine creation have the perfect coat to keep him warm in the harsh cold climate of the Highlands, but he had one of the most impressive noses to sniff out his master’s prey, but he would also collect it without mauling it; in the gundog world this is known as ‘soft mouth’, and it is a very desirable hunting trait.

Lord Tweedmouth created a consistently good collection of fine specimens, and shortly after his death the first Golden Retriever was shown in Great Britain in 1908. At the same time, so impressed were his sons by their father’s creation, they sailed the Golden Retriever across the pond to America where his skills, such as his impressive nose and soft mouth, were a surefire hit. The Americans also fell in love with his grace, beauty and dignity. The Golden Retriever became a popular family pet when America’s 38th president Gerald Ford’s Golden Retriever named Liberty, was regularly seen on TV to be a gentle and lovable companion. Ever since then the Golden Retriever has been amongst the top spots on the American Kennel Club’s (AKC) popularity ranking, and he is currently the 3rd most popular dog breed in America.

It is unknown when the first Red Golden Retriever came into the Golden family, but it is believed that he inherited his stunning mahogany color from the Irish Setter, and overtime, the red hue coat has become part of his genetic make-up.The most famous Irish Setter was ‘Big Red’ in the fictional novel written by Jim Kjelgaard, which was published in 1945. Ever since then the red coat color has become increasingly popular. Many people think that this color, combined with the Golden Retriever’s remarkable temperament, makes for the perfect pooch! 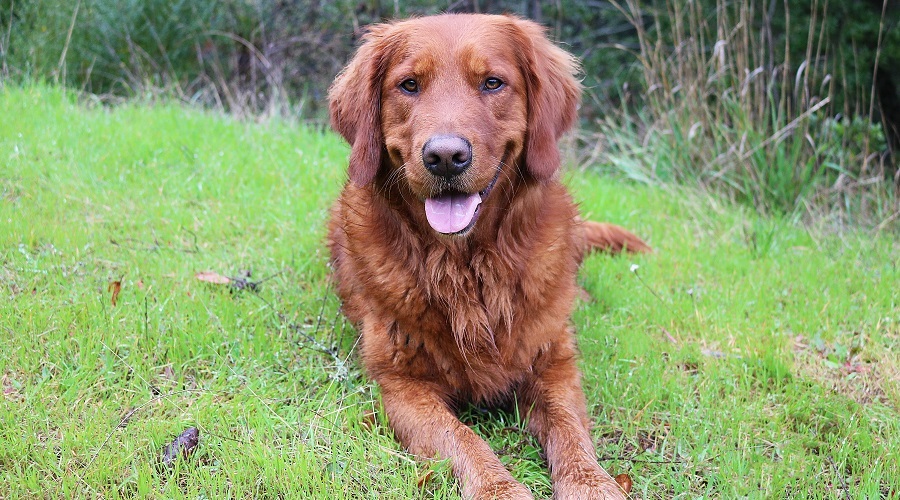 If the Red Golden Retriever pup was born into a hunting or sporting family then there is a high chance that he will be on the shorter and lighter side of the above weight and height spectrum. This is because the working lineage is more athletic and suited to hunting rather than in the conformation ring. Although he will not be significantly shorter, you may find that your Red Golden Retriever is the smallest in Retriever puppy class.

If showing your Golden Retriever in the conformation ring is an important factor to you, then you should not consider a Red Golden Retriever. The AKC have outlined in the breed standards that if they are too red then they will not be accepted in the ring. Only rich and radiant golden shades are accepted, and any color that is lighter or darker than this is considered to be undesirable.

The Red Golden Retriever has an under coat and an outer coat which enables him to retain his body heat whilst working in cold and harsh weather, such as the Scottish Highlands. His under coat is short and dense whereas his outer coat is long, and it is wavy and soft in appearance, giving him an elegant look. His outer coat will be shorter than the average Golden Retriever. This beautiful coat isn’t just aesthetically appealing, but it is also water resistant for when he is retrieving objects from the water. Not only does the color and the texture of his coat ooze elegance, but so does his tail. It is long and his hair plumes, and as the AKC would describe it, it is always carried ‘with a merry action’.

Similar to the Golden Retriever, he will commonly have black or dark brown features, such as the lips, the eyes and eye rims, and his nails.

In order to understand this, we need a quick science lesson. Each doggy cell (except the sperm and egg cells) has 39 pairs of chromosomes. Each pair is provided by both parents, one from Mama dog and one from Papa dog. Each of these chromosomes has 50,000 to 100,000 genes (which are made up of D.N.A), and approximately just 10 of these genes dictate coat color. Some of the 10 genes determine color itself, while others influence the distribution of color, i.e. spots or stripes, or the intensity of color in each individual hair or across the entire coat.

The two genes that are inherited from his parents may be identical or they may be different. Some genes are dominant, and some are recessive, and of course the dominant genes will mask recessive. For example, a pair could be ‘Aa’, with ‘A’ being dominant ‘a’ being recessive. If both big ‘A’ and little ‘a’ are present in a pair, then the dog will present as ‘AA’ as ‘A’ masks ‘a’.

So, in Golden Retrievers the important identifiers for color determination are known as B, E and C areas on the chromosome. B & E determine the color while C will affect shade or intensity. So, C genes become ‘C’ and ‘cch’. The C is the dominant gene (mostly!) and ‘cch’ is the recessive gene. In Red Golden Retrievers (and also yellow) their coat color will depend on the following gene variations:

The Red Golden isn’t a specific breed in and of itself.  It’s just a color variation of the actual golden retriever.  With that being said, breeders can certainly attempt to breed for darker coats, and the outcome will solely depend on the genetics listed in the table above.

There has been some controversy going back over many years that somewhere along the line an Irish Setter could have been introduced, which would have resulted in a darkening of the coat of the breed.  While there are many breeders today that produce “designer dogs” that are a mix of two purebreds like a Setter/Retriever mix, the red-coated golden retriever is truly just a darker color of the normal shade.  Almost all breeders recognize the darker shade as being purebred, although there are some out there that feel the darker color is a mutation of the breed and should be scored down when it comes to show retrievers in the ring.

This is where your mileage may vary.  Most competition judges will view a darker golden color as fine to show, but a deep red is a fault.  There are some judges that will score down for a darker red coat, and you may not be able to show your pup at all.  Be mindful of this if you specifically plan to show your dog.  Generally speaking, the golden retriever should be a wide variety of colors from a cream almost white color, all the way through a darker shade of red.

Extremely dark colored golden retrievers may not be able to be shown because the darkening of their coat may be considered to be flawed.  Keep this in mind if you are adopting a darker pup from a breeder with the intention of showing your dog.  If it’s just a family companion and you prefer the darker colored retrievers, then this will matter less for you in the long run.

Generally speaking “dark golden coated” retrievers are fine for show, but the dark red or mahogany colored golden retrievers are not, and will either be rejected for showing or scored down.

The Red Golden Retriever is more demanding than the average pup in regard to his grooming routine, however, he is slightly less demanding than the average Golden Retriever. As the Red Goldens have an ever so slightly shorter outer coat their shedding will not appear to be so intense. Of course, they will still shed, but there will not be as much of it compared to the Golden. They will still require brushing once or twice a week, but each session will certainly take slightly less time.

The Red Golden will require a bath once every four weeks to keep him smelling pleasant and looking fresh and healthy.

Buying your pup from a reputable breeder will optimize the health of your pup; ask for their parent’s recommended health certificates and ask to see them and their living conditions. This is particularly important for the Golden Retriever given their higher rate of Cancer.

Keep in mind that there’s also additional costs you will need to consider when adopting your red golden retriever pup, which can include the puppy crate made for goldens, the right toys, and also plan in advance for unexpected vet trips.

The Golden Retriever is one of the most popular dog breeds, and has been for many decades, and if you’ve ever met or owned one, then it is easy to see why. Their temperament is fantastic for families and active singletons alike.

Now take all that awesomeness and put an extraordinary color on him like the Golden Red, and you have one canine superstar that will dazzle the most hardened of dog aficionados with his skillset and beauty.

We always wanted a golden. And love the color of the red golden. We we’re looking for a female. We love camping hiking and boating. We think this dog would be perfect for us. We don’t need a perfect show dog. Just one we could love.

Thanks for the comment Anita! We would recommend you look for Golden Retriever breeders in your local area. Many of them will end up with Goldens that have red coats out of regular puppy litters, even though it's considered a fault. Good luck with your search!

Best Family Dogs: 15 Breeds For Any Household With Kids