Pomeranian vs. Yorkshire Terrier: Which is Better For Your Family? 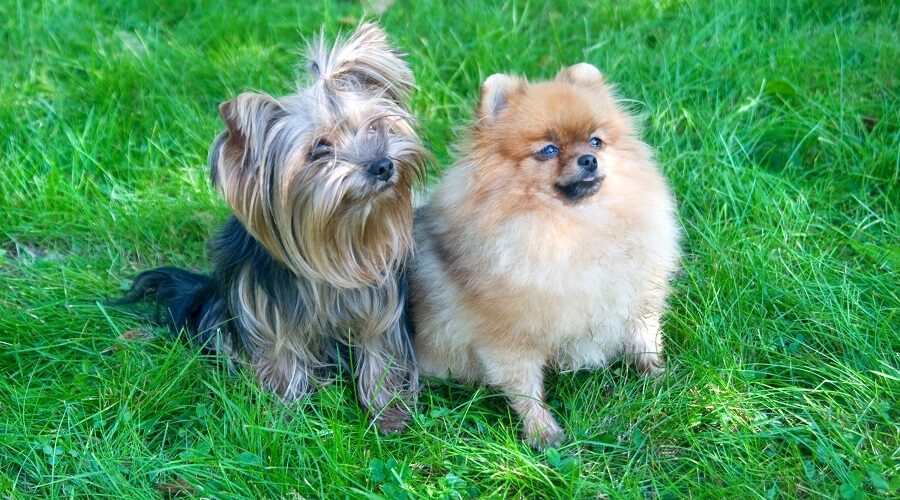 This question is entirely dependent on your family and circumstances, so, to find out which breed is better for your family it is important to look at your lifestyle and needs. The Pomeranian and the Yorkshire Terrier are very similar in many ways, and so there are only a few factors that will set these guys apart from one another.

They are similar in size, in temperament, in exercise and health needs. The most significant difference between the two, aside from their appearance, is that the Yorkshire Terrier is a hypoallergenic dog, and as such he is the better breed choice for any family who has dog allergies.

In this article the Yorkshire Terrier will be referred to by his common nickname, the Yorkie. So, let us begin the comparison to see which breed may be better for you and your family.

What Will Your Dog Do?

In order to find out which breed makes the better family pet, you must first ask yourself, why do you want a dog? A family pet will mean something different for each family. For some, a family pet might simply mean companionship or it might mean a source of animal entertainment. It may be a means of teaching young children the responsibility of having a pet, or maybe even having a hunting buddy to go out with. Whatever it means to you to have a family dog, there will be many breeds out there that suit yours and your family’s needs.

The American Kennel Club (AKC) has 7 specific categories of dog groups that can sometimes help people to decide which family dog is better for them, or even offer them different alternatives that they may not have thought of before:

The Pomeranian and the Yorkie are both part of the toy group, so it is safe to assume that you are seeking a smaller pup with a big personality.  The Yorkie has a teacup version as well.  Both of these guys are popular with city dwellers due to their small size and moderately low energy levels, and as such they are well suited to apartment life. Of course they are suited to large estates also, but you may just lose them! It is also important to note that the Yorkie, being a Terrier, also shares their temperament, in that they are feisty and energetic.

If it is a small canine package that you are after, then there are also plenty of other small dogs in the other groups, so be sure to check out the AKC ‘smallest dog breed’ page that may offer you some other alternative breeds.

Both the Pomeranian and the Yorkie are medium energy dogs, who both need up to 30 minutes of exercise every day. They also need mental stimulation in between their daily exercise which can take the form of a good romp around the yard or playing with their toys. Whilst they are both partial to an afternoon snooze with their humans, they will not appreciate being kept indoors all day as a full-time lapdog, so do not make this mistake like many others have done previously.

Overall, the Pomeranian and the Yorkie need the same amount of exercise. If you are a family that can provide up to 30 minutes of exercise every day, then they will both be suited to you.

The Pomeranian and the Yorkie, despite their almost identical size, look entirely different. The Pomeranian has a fuzzy exterior thanks to his thick and fluffy fur, and he takes on various singular shades.  He can be both darker in color or lighter.  The Yorkie, however, has straight and silky locks that fall to the floor. He has a dark color, either black or a diluted blue, with either gold or tan markings, His hair is often cut short for those who either prefer the look, or those who can’t commit to the daily grooming routine.

Although their differing appearance has no bearing on their ability to make a great family pet, this is one of the main factors that guides prospective owners to choose one breed, simply because they favor one look over the other.

Both the Pomeranian and the Yorkie require certain care when it comes to their grooming routine. The Pomeranian has a fluffy exterior than requires daily grooming, and the Yorkie’s coat traditionally is long and silky, which again requires daily brushing to ensure that it is kept healthy. Of course, if your Yorkie has a regular trim at the hairdressers and does not have the traditional long hair, then he will require much less grooming than the Pomeranian.

Overall, they both require more grooming than the average pup. Both breeds need to be with a family that can commit to daily brushing in order to keep their long hair tangle and dirt free.

The Pomeranian and the Yorkie are independent and stubborn, and if they are not in the mood to listen to you then they simply will not. Because of their independent traits they can be difficult to train compared to the average pup.

Some owners suggest that the Yorkie may be slightly easier to train because he is a Terrier, and therefore he is more likely to want to please his master and he will pick up commands quicker. On the other hand, there are some owners who argue that he is just as stubborn as the Pomeranian. Ultimately, the key here is to train them as early as you can, be consistent, and keep training sessions short and sweet, just like these guys!

Overall, the Pomeranian and the Yorkie are independent creatures, and as such they can be tough to train. The entire family should be consistent with their training and you should not expect a fully obedient dog 100% of the time.  When you leash train, make sure you get a harness specifically made for a small dog to make sure they get used to it right away.

Which Breed is Better with Kids?

The Pomeranian and the Yorkie are gentle creatures that enjoy the company of small children. The only issue here is that younger children may not know how to handle these tiny pups, and this can end in injury to the small dog. Many people say that they are not suitable for young children, but this is a personal choice, if you think that your child understands how to handle a small dog properly, then they will both make for great companions for children.

They also both get on well with other pets as long as they are socialized properly at a young age. If they miss this crucial training as a pup then they are known to be fearsome of other dogs, particularly larger dogs, and they will exhibit fear aggression barking. Not only is this undesirable behavior, but it can also land them in hot water if they pick on the wrong dog.

Overall, as long as children are old enough to understand how to handle these delicate pooches, then they both make great family pets. If they receive adequate socialization training as a pup, then they equally get on well with other household pets.

They are adorable balls of energy and will keep you and your family entertained for hours. They both enjoy a good romp around the yard, and you can rest assured that because of their tiny size they probably aren’t going to ruin your turf unlike a larger dog.

Overall, their temperament is similar in that they both have a delightful and fun personality. If you are seeking a more independent dog then the Pomeranian is probably the better choice for you, whereas if you are after a more easy-going pup then the Yorkie fits the bill.

Which Breed is Healthier?

Overall, both the Pomeranian and the Yorkie are healthy dogs that are prone to suffering similar ‘small dog’ health issues, and whilst the Pomeranian has to be examined for additional cardiac problems, he tends to live slightly longer than the Yorkie.

The Pomeranian has a double coat that sheds, and as such he is not a great pet for anyone who has dog allergies. The Yorkie, however, despite his long hair, is a hypoallergenic dog, which is great news if anyone if your family has dog allergies.

Overall, if anyone in your family household has dog allergies, then the Yorkie is the first choice, if not the only choice.

You would be wise to remember that many unscrupulous breeders, or puppy mills, churn out toy pups because they are in fashion, and they will cut corners on health checks and the very important first stages of their life. Whilst the cheap price might seem appealing, you are risking years of illness and vets bills, and of course a very unhappy pup and unhappy family life. As with any dog breed, buy your pup from a reputable breeder as it is not worth the risk!

Overall, the Pomeranian is slightly more expensive than the Yorkie in tems of the initial cost, but after this the yearly cost of these guys is almost the same.

The AKC has ranked the Pomeranian as the 23rd most popular dog in America, and the Yorkie beats him by a (lucky for some!) 13 places, at the 10th most popular dog. The Yorkie is slightly more popular and is often compared to other terrier breeds. Although this does provide a sense of how popular each of these guys are as family pets, it does not mean that the Yorkie is a better family pet than the Pomeranian, or vice versa, it is simply a current trend.

Why not chose the Pomeranian and the Yorkie cross breed, also known as either the Yoranian or the Porkie. They are just as cute, they are the same size of the Pomeranian and the Yorkie, and they have a similar temperament. Whilst these dogs are relatively new on the designer pup scene, they are proving to be quite popular family pets so be sure to check them out if you can’t quite decide between the two.

Which is Better For Your Family?

Overall, the Pomeranian and the Yorkie are similar toy pups who are small, sprightly and seriously cute! They are the same size, they have the same temperament and they almost have the same grooming and health issues to be concerned about.

Hopefully these differences will enable you to make a decision, as to who is the better breed for you and your family.

Thank you for all of your great information! How can I find one that is young, 2-4yrs old? Everyone wants a puppy now, right?

I wish there was a source to go to for the "young Pom/Yorkie". Now you have me interested in the Porkie!! lol!

Maybe some elderly people who are moving in with their family/home now due to covid? I am sure they would like their babies to have a nice home?

Thank you again! Any info you might have - I will take it! Like many of us, I can't afford a $1k + doggie. I wish I could
find that little itty bitty pom out there that is looking for me!

Hi DJ! I would recommend looking at local rescues. Rescue costs to adopt can range between $200, and $500. Definitely cheaper than a smaller puppy, and you'll still likely be able to get a purebred pup. Some of them may have some baggage (we own 2 rescue dogs) but if you can work past that, you'll both save a life, and reduce your overall dog ownership costs.

We actually have a page dedicated to just mixed Poms you should check out if you'd like to know what some of them may look like. Good luck in your search and thanks for commenting!