Comparing the Akita vs. the Pitbull Terrier for your next canine companion? Both breeds have a very loyal nature but are quite different in appearance, and temperament. We compare both dogs, including size, ownership costs, and more! 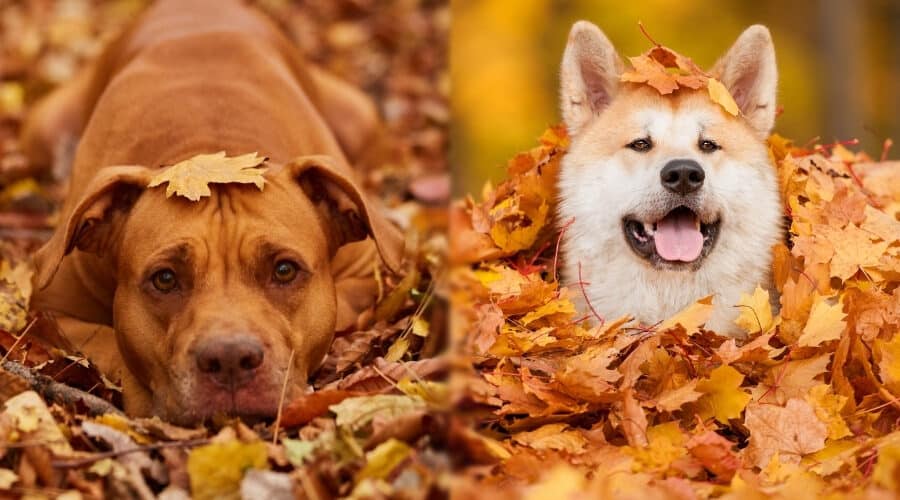 Are you comparing the Pitbull vs. the Akita for your next family pet? The American Pitbull Terrier, more commonly known as just the Pitbull, and the Akita are similar in some ways, but also very different. Generally speaking, these two breeds are more different than they are similar. They differ greatly in appearance, grooming, and puppy costs. But they are quite similar in their temperament and how they treat strangers.

Both the Pitbull and Akita can make equally great family companions. They are also both excellent homestead protectors or home guardians. While they are different in the way they protect, either breed can do the job. With that being said, there are some very distinct differences between each breed.

So if you’ve landed here looking to find a family protection dog, or are just curious about the breed differences, we’ve got you covered. Both breeds are adorable and loving. But they are also suited to different types of families. Depending on your needs, one breed may fit what you’re looking for over the other. Let’s jump in and find out whether the Akita or the Pitbull is the better breed for you!

The Pitbull and the Akita have very different pasts. And by looking at their histories, you can tell a great deal about them and what they will be like as family pets. It’s an integral part of the research process if you are thinking about welcoming one of these beautiful pups into your life.

The American Pitbull Terrier has one of the most troublesome histories, and we humans are to blame. In 19th century England, the Pitbull’s ancestors were created from Terriers and Bulldogs to produce the best fighting dogs. They were used to kill rats and fight other dogs for our entertainment. When this was outlawed, they traveled to America, and the largest specimens were bred to create the American Pitbull Terrier.

His bloody history has led to his unfair reputation as a dangerous dog. Thankfully, through education, we have realized that he isn’t a brute, but a misunderstood pup. He is so fantastic with humans and children that he is commonly used as a therapy dog, farmhand, and loving family pet. A Pitbull named Sergeant Stubby holds the record for the most decorated war dog of all time.

The Akita is older than the Pitbull, and he was developed around the 17th century in Japan. He was developed by an aristocrat and his men in an attempt to create a larger Spitz-type dog. He wanted a large hunting dog to hunt deer, wild boar, and the formidable Yezo bear. After bringing food to the table, he was then tasked with protecting his family and keeping them company. His fluffy coat often has him confused with other breeds.

The Akita was so impressive that he was only kept by royal families to protect their palaces. Thankfully, they decided to share the Akita with the world. He has been a popular family pet ever since. The Akita was trained to work alongside his master, and as a result, he has developed an incredible bond with mankind. He is thought to be one of the most loyal dog breeds.

The Pitbull is a medium-sized dog, who is athletic and trim in appearance. His muscles are defined, with very little body fat. The Akita is large to a giant-sized dog, who is thick-set and often carries a little bit of chunk. He also has powerful muscles, but rarely can you see them like you can on the Pitbull.

They both have a double coat, but the Pitbull’s coat is short and slick. The Akita’s coat is dense and fluffy, and water-resistant. The Pitbull can take any doggy color other than merle. The most sought-after color is blue, and white Pitbulls are almost just as rare. The Akita can also take on many colors. He usually has a darker face with his black mask markings.

The Akita has two distinct looks. In some countries, such as the United Kingdom, the squarer Akita shape is named the American Akita. The foxier-looking Akita is known as the Japanese Akita. All Pitbulls look the same. He is often confused for other similar-looking dogs, particularly the other Pitbull-type breeds.

The Akita however, doesn’t extend his love to strangers. In fact, he is overly suspicious of strangers and will be on high alert with a new human around. He takes his role as family protector very seriously, so you need to warn outsiders not to enter unless you greet them at the gate.

On the other hand, Pitbulls tend to love new people. Despite his reputation, he is one of the friendliest dogs around humans. Pitbulls will protect you if you are in danger, but the Pitbull will assume that everyone is a friend and not a threat. If you are looking after a family protector, the Akita is the pup for the job.

They both love to have fun, and they are both big goofballs around their family. You can be sure that you will have plenty of fun with both breeds. They both crave human company, and they hate to be left alone. The Pitbull has more mental energy than an Akita. And he requires more interaction and playtime throughout the day to keep him happy.

The Akita is a much more dominant dog than the Pitbull. And again, despite his reputation, the Pitbull is quite submissive when it comes to humans. This makes the Pitbull much easier to handle for first-time dog breed owners. The Akita is definitely not suited to a family with no previous dog experience.

The Pitbull and Akita’s exercise needs are very similar. They are both energetic, and they need at least 60 minutes of exercise every day to keep them happy and healthy. Both of these breeds will get super excited for walkies, come rain or shine. If you don’t meet their exercise needs, they will both turn their attention to your furniture. Chewing it all to pieces to prove a point.

As they both crave human company, they will be happy to join you in any exercise you like. From jogging around your local park to long mountainous adventures, both of these guys are happy to be by your side. Because the Pitbull often finds himself targeted by BSL legislation, you need to double-check whether he is allowed in your local doggy park. Less often, the Akita is affected by these laws.

As intelligent breeds with lots of physical and mental energy, they need access to toys that can withstand abuse due to their incredible jaw pressure. There will always be times when you haven’t the time to play with them for a few hours, so they need to be able to occupy themselves for a little bit. Toys are a great addition to any dog owner’s arsenal.

They both need to be socialized from a young age, especially with other dogs. The Pitbull, with his dog fighting history, is sometimes overwhelmed by other dogs if not socialized adequately. And because the Akita is very protective, he might see other dogs as a threat to his family. But, with adequate socialization training, they should be just fine. But you do need to put the extra effort in with both of these breeds.

The Pitbull is eager to please his master, whereas the Akita isn’t as keen. The Akita is much more independent and will not be as obedient as the Pitbull. This is another reason why the Akita is only suited to experienced dog owners. The Akita’s obedience training is a lifelong commitment. Whereas once the Pitbull has been trained, he’ll usually remember his training.

The most effective dog training technique for these guys is positive reinforcement training. The Pitbull is more likely to be motivated by praise. Think lots of squeaky ‘who’s a good boy’ and neck scratches. But treats and objects also do the trick. The Akita is likely to be driven by food – just be sure not to give him too many because he is prone to easy weight gain.

The Pitbull is a very healthy dog breed. He has a long lifespan, and he can live up to 16 years on average. Unfortunately, like a giant dog breed, the Akita has fewer years to enjoy. His average lifespan is 10 to 13 years. However, he has a considerably long lifespan for a giant breed and is still considered healthy.

The Pitbull and the Akita are both prone to hip dysplasia, which is an abnormal formation of the hip socket. Over time this can be painful, and it will affect their mobility. The Pitbull is also prone to skin allergies, but thankfully this can be alleviated with medication and a high-quality diet. The Akita is prone to a variety of eye conditions and hypothyroidism too.

The Akita eats more than the Pitbull. Which is something to consider if you are taking on the Akita as he eats more than the average dog. The Pitbull consumes about three cups of dog food a day, and the Akita eats around four cups of food per day. The Akita should eat a kibble specifically designed for large or giant breed dogs, especially during their developmental period. Pitbulls will eat a dry kibble meant for more active breeds due to their higher activity levels.

Both the Pitbull and the Akita will do well on a high-quality diet, and preferably one with high protein content. The Association of American Feed Control Officials recommends that adult dogs consume a protein content of at least 18%. But we would recommend at least 25% for both of these breeds. A high-quality kibble will be full of healthy omega fats too. This will help keep the Akitas coat thick and lush, and it will help to soothe the Pitbull’s sensitive skin.

The Akita is prone to becoming overweight, so be sure not to overfeed him. Always follow the package instructions according to his weight. The Pitbull has a higher metabolism, and so you won’t have to be as strict. Experts also recommend that the Akita should be fed a low-calorie kibble from the age of seven as a defense against possible kidney disease.

The Pitbull sheds less and has an easier grooming routine compared to the Akita. The Pitbull only needs to be brushed once a week to keep him looking healthy and smart. The Akita needs brushing at least every two or three times a week. During the shedding seasons, the Akita should be brushed most days if you want to prevent hair hurricanes in your home.

Be sure to work with a reputable breeder because they will breed healthy pups and ensure that they are socialized from a young age. This is particularly important for Pitbull and the Akita and their propensity for not getting on with other dogs.

As you can see, the Akita and the Pitbull are both very different dog breeds. The Akita is a giant guy, whereas the Pitbull is a medium-sized canine. The Akita needs an experienced dog owner, compared to the Pitbull, who is much easier to train. But whichever dog breed suits you and your lifestyle, you can be sure that you will receive lots of love and doggy kisses.