We conducted a study to rank the most popular dog breeds to photograph based on the number of views and posts on TikTok and Instagram. Which breed do you think will come out on top? 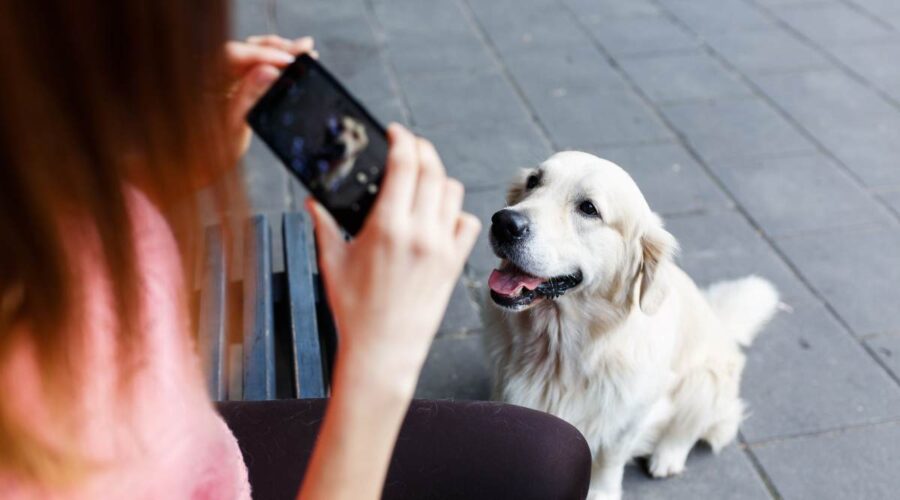 Are dogs the most photogenic animals in the world? Whether they’re minding their own business in the garden or having fun on a walk, it seems our cuddly pets are always ready to pose for a cute pic.

Thanks to social media, it’s become easier than ever to photograph and share the cutest pictures of our furry friends. On Instagram, #dog has over 352 million posts, while #dogsofinstagram boasts over 292 million.

The growth of newer social platforms, such as TikTok, has allowed millions of users to share videos of their pets as well. For comparison, #dogs on the platform has 113.1 billion views, highlighting just how watchable these cute animals are.

While it’s safe to assume that dogs are quite well received online, it leads to the question, are all dog breeds popular on social media, or are some more favored than others? With the help of TikTok and Instagram data, Love Your Dog wanted to explore this further.

To find out which is the most popular breed of dog to photograph or record videos of and post on social media, we analyzed the number of TikTok views and Instagram hashtags for each dog breed and ranked them accordingly. The results may surprise you!

We looked at 20 different dog breeds, renowned for being the most popular breeds according to the latest report from the AKC.

We then used TikTok and Instagram to record the number of hashtags and views before combining the numbers and ranking the dog breeds according to the results.

The data revealed that Golden Retrievers are the most popular dog breed to photograph and video on social media. Golden Retrievers received 31.4 billion views on TikTok under the hashtag #GoldenRetriever. The same hashtag had 33,778,751 posts on Instagram.

Golden Retrievers are useful dogs that have been utilized for several roles, including search and rescue and therapy. These loving family dogs are gentle and kind. No wonder they’re so popular!

In second place are German Shepherd dogs. The popular breed had over 13 billion hashtag views and posts across TikTok and Instagram. This included 13.1 billion views on TikTok under the hashtag #GermanShepherd and 19,939,090 posts on Instagram.

German Shepherds are well known for their guarding and herding due to their high intelligence, but these energetic dogs also make for the perfect pet. They can be wary of strangers due to their protective nature.

In third place, we rank Rottweilers with over 12 billion combined posts and hashtag views. The breed received 12 billion views across TikTok, while #Rottweiler was included on 8,621,232 Instagram posts.

Although Rottweilers have short coats, they are continual shedders meaning they could agitate someone with a pet hair allergy. This working dog requires a lot of love and attention. Exercise is also important to maintain fitness and morale.

Next, Labrador Retrievers place fourth in our study. This cuddly breed received 8.2 billion views on TikTok with #Labrador. The same hashtag was also used on 24,912,314 Instagram posts.

Like Golden Retrievers, Labs are the perfect dog for a family. In fact, the popular breed ranked number one as the best family dog! These pups are social and trusting, love a snuggle, and enjoy getting out and burning some steam.

Rounding out the top five most popular breeds to photograph, French Bulldogs received over 7.5 billion combined posts and hashtag views. #FrenchBulldog received 7.6 billion views on TikTok, while the same hashtag was used on 36,796,886 Instagram posts.

French Bulldogs, also known as ‘Frenchies,’ are family dogs that come in various colors, from cream to blue. Sadly, this cute breed is prone to several health issues, including hip dysplasia and breathing difficulties due to their upturned noses.

In sixth place in our ranking, the Bulldog breed collected a combined total of 7,622,875,959 posts and hashtag views. This included #Bulldog collecting 7.6 billion views on TikTok. The same hashtag was also used on 22,875,959 Instagram posts.

Bulldogs are similar to Frenchies as both come with short muzzles and flat faces and therefore come with many of the same health risks. Bulldogs are low maintenance, making them great with kids and excellent family companions.

Ranking in seventh place, the Doberman Pinscher breed collected over 7.5 billion posts and hashtag views. On TikTok, #Doberman received 7.5 billion views; on Instagram, it was included in 5,691,713 posts. Dobermans had less interest on Instagram than other breeds lower in the ranking, but its popularity on TikTok saw the breed rank seventh.

Doberman Pinschers aren’t for everyone, but those who can look past the stereotypes will find Dobermans are strong family guardians. While they can be independent and stubborn, their protective nature means they’ll always put their owner first.

In eighth place is the Dachshund breed, with a combined total of 7,119,031,083 posts and hashtag views. The breed received a lot of love on TikTok, which got 7.1 billion views. Elsewhere, #Dachshund was used on 19,031,083 different Instagram posts.

Dachshunds, also known as sausage or weiner dogs, are favored family and show dogs. Their unique shape has kept them popular throughout the years. These dogs are highly intelligent and, therefore, easier to train than other breeds. Crate training is recommended when house training a Dachshund.

Next, Poodles place ninth in our ranking of the most popular breeds to photograph. The breed collected 4.5 billion views on TikTok, while #Poodle was used on 21,764,263 Instagram posts.

Poodles are known for their unique curly coat. Despite their lavish fur, these dogs are actually low-shedders, making them a possibility for people who suffer from allergies. Poodles come in three sizes; Standard, Miniature, or Toy. Standard can be 15 inches or taller, while toy poodles are only 10 inches or less.

Great Danes are easily recognizable and the second tallest breed in the world. Due to their vast size, they can be difficult to train and territorial. If housing a Great Dane, be sure you have the yard space available to let them explore but also keep in mind that they are known for being big, snuggly couch potatoes.

Siberian Huskies are one of the most popular medium-sized dog breeds due to their striking eyes and unique coats. Their double coats are thick and dense, making them weatherproof in icy conditions. Due to their lineage as sled dogs, this breed is among the most energetic and requires 60 to 90 minutes of daily exercise.

Placing twelfth in our study, Beagles collected a combined total of over 2.4 billion posts and hashtag views. #Beagle received 2.4 billion TikTok views and 13,685,524 posts on Instagram under the same hashtag.

The Beagle is known for being low-maintenance and typically gets along well with people and other dogs. The breed comes in two different sizes – 13-inch and 15-inch and looks similar to Foxhounds with their adorable floppy ears and medium-length fur.

Next, the Australian Shepherd breed ranks thirteenth with over 2.2 billion combined posts and hashtag views under #AustralianShepherd. This included 2.2 billion views across TikTok, while 9,890,266 Instagram posts used the same hashtag to share photos of the cuddly breed.

Australian Shepherds were created in the 19th century when the Pyrenean Shepherd was crossed with a Border Collie. This breed is known for its fun and energetic nature and is a natural herder, like all shepherd breeds. They may take time to warm up to some strangers, but once they’re settled, they are extremely calm and friendly.

In fourteenth place ranks the Boxer with over 1.7 billion combined posts and hashtag views with the hashtag #BoxerDog. The breed collected 1.7 billion views on TikTok and was mentioned on 12,958,020 Instagram posts.

Boxer dogs originated in Germany and were used as working dogs up until the 19th century in roles such as police and guard dogs. They were even used in the German military throughout World War One. This historic breed makes for a protective yet loving pet that is very outgoing and energetic.

Following extremely close behind the Boxer, German Shorthaired Pointers ranks fifteenth with just over 1.7 billion combined posts and hashtag views. #GSP was used on TikTok, where the breed received 1.7 billion views. Meanwhile, on Instagram, #GermanShorthairedPointer was preferred and used on 2,111,030 posts.

Like Boxers, German Shorthaired Pointers originated in Germany, as you might expect. This traditional hunting dog has steadily risen in popularity in recent years and is now a household choice for a family dog. This breed comes with a unique coat and is rarely one single color.

The Bernese Mountain Dog breed is historic and dates back 2,000 years when they were used on Swiss farms. The breed’s name originates from Bern, Switzerland, a location they became synonymous with. This working dog breed is strong in build but, deep down, is soft-hearted, cuddly, and a great family dog option.

In seventeenth place in our study, the Yorkshire Terrier collected over 300 million combined posts and hashtag views making it the first breed in our rankings to have under 1 billion online hits. The breed received 318,400,000 views on TikTok with #YorkshireTerrier and was used on 8,661,607 Instagram posts.

Commonly known as ‘Yorkies,’ this breed is often preferred for its tiny size and low shedding. They may be small, but Yorkshire Terriers are packed full of energy. We recommend giving them at least 45 minutes of daily exercise. The breed is highly intelligent and can be trained fairly easily compared to others.

Next, in eighteenth place, ranks the Miniature Schnauzer with over 270 million combined posts and hashtag views. #MiniSchnauzer was the favored tag on TikTok and collected 268,200,000 views, while #MiniatureSchnauzer was used on 3,375,786 Instagram posts.

The Miniature Schnauzer was created by mixing the Standard Schnauzer with Poodles and Affenpinschers. The cuddly breed is known for its confidence despite its size, seeing itself as the family guardian. Compared to other breeds, Mini Schnauzers are healthy and have a lifespan between 13-15 years.

One of the most popular family dog options, this canine was bred with both companionship and energy in mind. These cuddly dogs are great prospects for young families and are even great in multi-pet households. Their fluffy coats can come in various colors, including ruby, tricolor, and Blenheim.

Rounding out our rankings, in the twentieth position, is the Pembroke Welsh Corgi. It’s the only breed included to have under 100 million combined posts and hashtag views. #PembrokeWelshCorgi collected 97,400,000 views on TikTok, and the same hashtag received 2,385,985.

Often shortened to simply ‘Corgi,’ this breed is extremely popular and was even favored by the Queen of England, Elizabeth II, who owned over 30 during her lengthy time on the throne. This breed is extremely affectionate and loves to cuddle with its owners. However, their independent nature can make them disobedient sometimes!

We hope this ranking helps you understand which dog breeds are the most popular on two of the most popular social media channels, TikTok and Instagram. It was exciting to see so many beautiful types of dogs, from Dachshunds to Poodles and Great Danes to Rottweilers. Overall, the ranking yielded some interesting results, ultimately finding the Golden Retriever as the winner of the coveted top spot.