Having trouble deciding between a German Shepherd and an English Mastiff as a home guardian or family companion? Explore what makes them different and find out which of these breeds is better suited for your lifestyle! 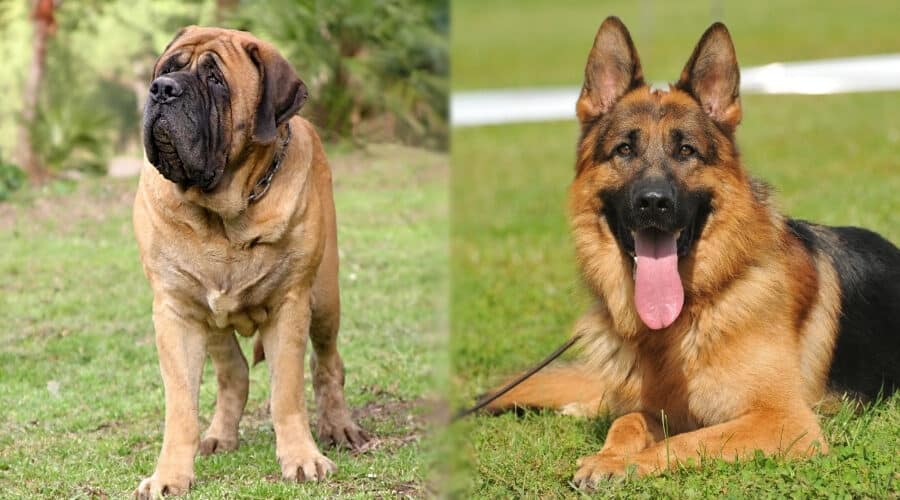 The English Mastiff and the German Shepherd are two canines who have plenty to offer any family. But it’s fair to say that, for a variety of reasons, not all families can handle these breeds. They are both affectionate, caring, and super protective of their family. The English Mastiff is the more chilled canine, and the German Shepherd is the more intelligent.

Both breeds make excellent family companions and home guardians. For the most part, these pups are completely different. But they do share some temperament and personality traits that any potential owner will want to compare before welcoming either into their home.

Whether you are here because you cannot decide which dog is the better option for you, or because you want to educate yourself on these two gorgeous breeds, you have come to the right place. So, let’s get straight into the breed facts!

A dog breed’s history is one of the first places you should start when it comes to understanding a dog. From where the dog comes from, what he was bred to do, and what his personality traits will be like, it is invaluable.

The Mastiff, sometimes also known as the Old English Mastiff, is a mighty meaty pup. And if you think he is big now, back in the day, 55 BC to be precise, he was much bigger. The Roman conqueror, Julias Caesar, was so impressed by his courageousness and sheer power that he took him back to Rome to battle lions. He even made a note of them in his journal.

He was also used by estate owners to protect their land and hunt large game. Fast forward to the end of World War II, and it is believed that only 14 English Mastiffs remained in Great Britain. American breeders exported their specimens and saved the breed. He is not used in battle anymore. Instead, he is now commonly found in family homes snoozing his afternoons away.

The German Shepherd is a much newer breed, that originates from late 19th century Germany. In an attempt to make the perfect farm dog, a German officer took farm dogs from each district and bred them. Over time, he created the German Shepherd. He made a fantastic herder, general farmhand, and estate protector. There are two distinct lines of German Shepherd, one originating from Europe and the other from America.

So impressed by the German Shepherd’s protection abilities and bond with his master, he soon became the best-known working dog in law enforcement and military. This strong bond has also led him to become the 2nd most popular dog breed in America, finding himself in many family homes.

The most famous of all was a Hollywood star German Shepherd called Rin-Tin-Tin. Not many people know that before this, he was a rescued war dog. It’s not uncommon for German Shepherds to be compared to other German breeds, due to their genetic origins.

The English Mastiff and the German Shepherd are very different when it comes to their appearance. When looking at them side by side, there aren’t many people who would mix the two up. The Mastiff is the heaviest of all dog breeds. Typically, his breed weighs between 120 and 230 pounds.

They both have a double coat, which helps to regulate their temperature during the seasons. The English Mastiff’s coat is short and tight, whereas the German Shepherd’s coat can be either long or short. As such, it is a bit more noticeable when the German Shepherd sheds. Unless you are lucky enough to find yourself a fluffy Mastiff, but these are much rarer!

They also have different colored coats. The English Mastiff can sport a brindle coat, and also have to carry an apricot coat or fawn-colored coat. They will usually always have a darker facial mask. Compared to the German Shepherd who commonly wears the distinctive black and tan colored coat, with a similar darker face. They are both as gorgeous as each other but very distinct in almost every way.

It is their personalities where you will find the most similarities. But thankfully, there are also differences that help owners to pick between the two. Firstly, they are both as courageous as each other, and they would both protect their family in the face of danger. So, if you are looking for a family guard dog, you have definitely come to the right place.

The German Shepherd might be able to chase people away easier thanks to his agility. But you can be sure that nothing or no one will get past with one of these guys by your side. They are both aloof with strangers, and they will both alert you to incoming visitors.

When it comes to their family, they are both loving and affectionate. They will both shower you in doggy cuddles and kisses. You can expect that the English Mastiff kisses will be more slobbery, for sure. They both love children very much. The German Shepherd is likely to direct his affections towards his primary caregiver. Compared to the Mastiff, who will probably share his love with whoever has given him the most treats that day.

They both love to have fun with the family and aren’t afraid to look silly in front of their loved ones. The English Mastiff is the more clumsy canine out of the two breeds. And many would say that the German Shepherd is the more serious canine out of the two. The German Shepherd is less likely to approve being left alone for long periods of the day.

If you are a first-time dog owner, the German Shepherd might be the better option for you. This is because the German Shepherd is super intelligent and eager to please, which makes him very trainable. He is ranked as the third most intelligent dog breed. And then there is the English Mastiff, who is not so smart. And he is also stubborn, which makes him defiant and challenging to train.

A long walk around the neighborhood will suit the giant Mastiff just fine. But this will not be enough for the German Shepherd. Instead, he needs running, mountainous adventures, agility training, and much more. He also needs more mental stimulation throughout the day on top of his family playtime too. Both breeds can be destructive, so investing in some tough dog toys to keep them busy will help.

The Mastiff might try to convince you that he doesn’t need his walk on a rainy day. The German Shepherd will be nudging you for more interaction and training sessions to show off his skills. It’s safe to say that the German Shepherd is better suited to an active family. Despite their differences, they will both become bored and destructive if you don’t exercise them adequately.

Again, the Mastiff and the German Shepherd are different when it comes to their training. The German Shepherd is smart, eager to learn, craves approval from his master, and devoted. This makes him a doggy dreamboat to train and ideal for a first-time dog owner (if you can handle his intensity). All of this is precisely why he is chosen to work alongside military personnel.

The Mastiff is stubborn, and although we hate to say dumb, he wasn’t graced with a lot of canine intelligence. It’s safe to say that he is more brawn than brain. And if the Mastiff isn’t in the mood for your training attempts, you can be sure he isn’t going to partake in it. This is all a part of his glorious charm, but it can be frustrating for those wanting an obedient dog.

The key to training both of these guys is the positive reward training method. The German Shepherd will crave your praise. Whereas the Mastiff is probably only going to be interested in you if you have enticing treats in your hand. Similarly, they both need to be socialized well from a young age if you want them to grow into polite pups who can mix with other dogs. This is super important for protective dog breeds such as these guys.

Both the Mastiff and the German Shepherd are prone to hip and elbow dysplasia. This is an abnormal formation of the affected joints and can cause mobility issues later in life. They are also both affected by degenerative myelopathy, which is a progressive disease of the spinal cord. And dilated cardiomyopathy is also linked to the Mastiff breed.

As you can expect, the Mastiff needs a higher calorie dry kibble to support their rapid growth rate, especially as puppies. Mastiffs eat more than the German Shepherd. The Mastiff will consume, on average, eight cups of food a day.

German Shepherds need a dry kibble designed for more active breeds and only eat approximately three cups of food a day. This can make a massive difference to their monthly food bills, and something you need to consider if you are choosing between the two.

Our advice is to always feed the Mastiff and the German Shepherd the best quality food that you can afford. Not only will it provide a well-balanced diet, but it will also be super tasty. And it could potentially keep them healthy enough for them to stay with you for a bit longer.

The Mastiff and the German Shepherd are both prone to a condition known as bloat. This is a life-threatening condition that can be fatal in just a few minutes. Please educate yourself on this if you are about to welcome one of these guys into your life. It will govern the timings of his mealtimes.

The Mastiff and the German Shepherd both have double coats that shed moderately throughout the year and slightly heavier during the shedding seasons. A good grooming routine will help you manage their shedding and control how much lands on your sofa and your outfit.

The Mastiff and the German Shepherd are both common dog breeds, with reputable breeders in most states. Working with a reputable breeder will cost slightly more than a puppy mill, but you can be sure that they will be much healthier and happier. A Mastiff puppy is marginally more expensive than a German Shepherd puppy, with only $500 between them.

But if you are looking for a puppy from a famous breeder or a particular lineage, you can expect to pay much more. You also need to factor in all the other costs associated with these guys, and not just their initial puppy cost. Being the giant breed, the Mastiff is the more expensive breed to look after. His food bills, veterinary fees, XXL equipment, and everything else are a huge commitment to take on.

After pitting the Mastiff and German Shepherd against one another, you can now see all of their differences and similarities. If you found yourself here because you couldn’t decide which one was the better breed for you, hopefully, you now have the answer you came looking for. But, whoever you choose, know that you have selected one of the best family protection dogs around. As well as gaining a fun and affectionate, gentle family addition.