Have you settled on adopting a small dog, but can't decide between the Lhasa Apso or the Shih Tzu? Both of these small dogs are quite popular with families. In the article below, you'll find out the differences between the two dogs, and what similarities they share. 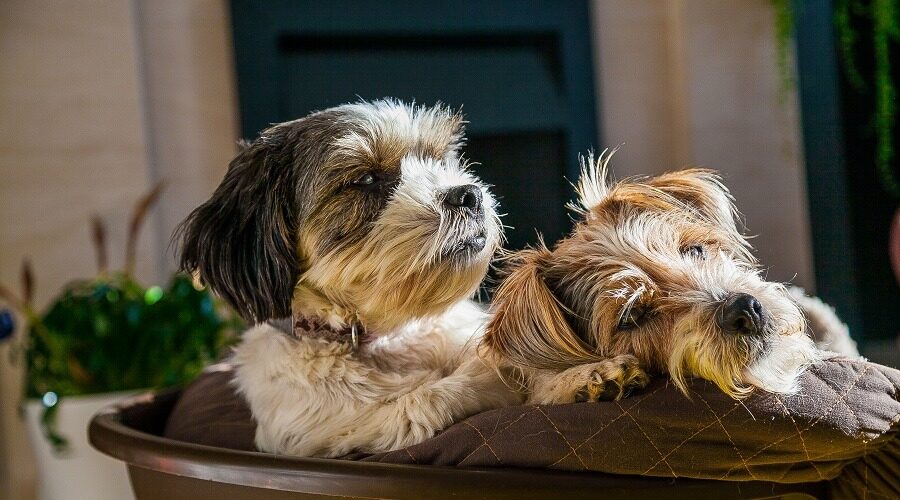 The Lhasa Apso and the Shih Tzu have a closely linked history, and it is believed that the Shih Tzu is a descendant of the Lhasa Apso, and this is one of the main reasons as to why they are so similar in their appearance.

They are both adorable pups who, if welcomed into the right home, will thrive in their environment and make a great family pet. So read on to find out a bit more about these small Asian dog breeds.

The Lhasa Apso and the Shih Tzu are ancient breeds that originate from Tibetan and Chinese lands, and throughout history, their journeys have been intertwined with one another.

The Lhasa Apso was first documented in 800 B.C., and he is named after the holy city of Lhasa in Tibet. He was believed to be a sacred creature who would guard monks and their monasteries, and when a monk passed away it was believed that their soul would enter their Lhasa Apso.

They were a closely guarded country secret, and they were not allowed to leave the country unless gifted by the Dalai Lama. Since the late 16th Century, many pairings of the Lhasa Apso were gifted to Chinese emperors

The 13th Dalai Lama gifted a pair of Lhasa Apsos to America in 1933, and they were the foundation stock of almost all Lhasa Apsos in America today. Shortly after, the first Lhasa Apso was registered by the American Kennel Club (AKC) in 1935, and while they are still a rare breed today, they make a wonderful family pet. In 2019, he is ranked as the 71st most popular dog breed in America.

The Shih Tzu’s history is rather mysterious and much less documented than the Lhasa Apsos. It is believed that the Shih Tzu was born as a result of crossbreeding a Lhasa Apso with a Pekingnese, and it remains unknown as to whether he was created in either Tibet or in China.

Regardless of where he was born, he has appeared throughout history on many paintings and carvings, thus suggesting that he has always been a treasured canine amongst royalty and rich nobility.

Breed fanciers first took the Shih Tzu to America in the mid-20th Century, and he was first recognized by the AKC in 1969. He is a more popular breed than the Lhasa Apso who, in 2019, has been ranked as the 20th most popular dog breed in America.

The Lhasa Apso and the Shih Tzu are very similar-looking pooches, so don’t be too harsh on yourself if you cannot tell them apart. The easiest way to distinguish the two breeds is to look at their size. The male Lhasa Apso will measure 10 to 11 inches in height, from paw to shoulder, compared to the slightly shorter Shih Tzu, who measures 9 to 10 ½ inches.

The Lhasa Apso weighs between 12 and 18 pounds, whereas the Shih Tzu measures between 9 and 16 pounds. Although the difference is slight, it is often the easiest way to tell them apart. The Shih Tzu, being the smaller pup, finds himself in the toy group, whereas the Lhasa Apso is considered to be a bit too big for this group, and so he finds himself in the non-sporting group.

They both have very similar coats, in that their long and luxurious locks traditionally fall to the floor, and it is their hair that is their signature feature! However, on closer inspection, their coats are slightly different. The Lhasa Apso commonly has an obvious hair parting along his spine, and his fur is frequently tipped with dark fur on his ears. The Shih Tzu’s coat tends to have a slight wave to it whereas the Lhasa Apso does not.

The Lhasa Apso has a longer muzzle that leads to a narrower skull, and he has slightly smaller eyes than the Shih Tzu. The Shih Tzu’s head is more domed in shape than the Lhasa Apsos head.

If they keep their traditional long coats, these slight differences are difficult to identify simply because you cannot see their features very well. Overall, they are so similar in appearance that it is rarely this that helps prospective owners to decide between the two breeds.

It is their temperament that is normally the deciding factor between the two breeds. The Lhasa Apso is known as the ‘bearded lion dog’ and this is for good reason. They were traditionally used by the monks as guard dogs to alert them when an intruder set foot in their monastery. Their bark is surprisingly loud, and they are suspicious of anything unfamiliar, which is why they were favored as their protectors. Still to this day, they have kept this trait, and this is what sets them apart from the Shih Tzu.

The Lhasa Apso is aloof with strangers and will not take kindly to a stranger entering his master’s yard, whereas the Shih Tzu, who might let out a few barks, will bark out of excitement. If it is a small guard dog that you are after, then look no further than the Lhasa Apso.

The Shih Tzu is extremely friendly with anyone who will pay him attention, and boy does he love to be the center of attention! He is traditionally used to living in luxury Chinese Palaces and to this day he still expects royal treatment.

He enjoys being stroked on his master’s lap and will readily accept strangers onto his estate without any distrust. If you are seeking a friendly ball of fur, then the Shih Tzu fits this requirement perfectly.

Despite their personality differences, with their immediate family, they are very affectionate and loving canines who will shower you with love. They are both tolerant and gentle with children, and as such, they both make great family pets if children treat and handle them correctly.

They will both happily use your living room as an exercise studio throughout the day and will enjoy the occasional romp in the backyard to keep themselves occupied.

Aside from his basic exercise needs, the Shih Tzu is happy to sleep on laps all day long, with the occasional leg stretch pushing himself off one lap onto the next. The Lhasa Apso, being the more energetic and livelier pup, will need a bit more mental stimulation in between exercise sessions, so interactive games with his family or giving him treat-filled puzzle toys is advised.

The Lhasa Apso has a somewhat complex personality, and as such his training is also more complex, and as such he is not an ideal dog for a first-time owner. He is often compared to a teenager, playful and energetic with several shades of moodiness and tantrums thrown into the mix. It is his unpredictable mood that often causes difficulty in training him, but the key is to be persistent and consistent with your training sessions, and do not give in! His guarding tendencies need to be addressed, and the best way to tackle this is through early socialization with as many strangers and dogs of all shapes and sizes.

If he displays any undesirable behaviors that you cannot correct yourself, then it is advised to enroll your dog into obedience classes. However, once you have cracked his complex personality, then he is an adorable family pet.

The Shih Tzu is somewhat easier to train, and despite the odd tantrum here and there, he is generally more laid back than the Lhasa Apso. Early socialization is important to ensure he is not timid with larger dogs, and positive reinforcement methods are advised as with any other dog. He is a better pup for first-time owners compared to the Lhasa Apso.

Neither breeds are recommended to be tested for any health issues in particular according to the national breed clubs; however, they are both predisposed to the following health issues:

Eye health – they both suffer from various problems related to their eye health, such as ‘Cherry Eye’, Progressive Retinal Atrophy, and Keratitis to name a few.

Renal Dysplasia – this is a genetic defect of the kidneys, which causes a variety of symptoms and a lot of discomfort and pain for the pup.

Patellar Luxation – essentially this is when the kneecap becomes dislocated, and again causes pain when walking.

In addition to the above, the Lhasa Apso suffers from Sebaceous Adenitis, which is a serious skin condition that can lead to a variety of infections, and as a result, they will experience pain and omit an unpleasant odor.

The Shih Tzu is predisposed to Portosystemic liver shunts, whereby the kidney does not effectively cleanse his blood as it should.

The Lhasa Apso will eat around 1 ½ cups of food a day, whereas the Shih Tzu will eat slightly less at 1 cup of food a day. They both similarly adore treats, so be sure to monitor their treat intake as they can quickly pile on the pounds.

A Lhasa Apso or a Shih Tzu who will be entered into conformation shows should keep their traditional long silky locks, and it is these locks that cause them both to be exceptionally needy in the grooming department. He should be brushed every day to ensure that tangles do not develop. He should be bathed, shampooed, and conditioned every two weeks to keep his coat clean and smelling fresh.

However, if you want for an easier coat to look after, which is called a ‘puppy cut’ in the grooming world, and you don’t want to show him in show, then your best bet is to just chop it all off. This will mean their grooming needs will be the same as any other small dog, and much less time-consuming to look after.

It is commonly believed by many in the canine world that the Lhasa Apso and the Shih Tzu are hypoallergenic dogs, however, this is a myth. Their undercoat hairs will get caught up amongst their long outer coat, so you may not see much shedding hair, however, they do shed. Therefore, they are not hypoallergenic dogs.

If you are seeking a hypoallergenic pup, then the Maltese or a Malti-poo is similarly sized and he is better suited for those with allergies.

It is likely that the Lhasa Apso is slightly cheaper because he is much less popular. Of course, as with any pup, if you want a specific look or a dog from an award-winning lineage, then you can expect to pay more.

As the Lhasa Apso and the Shih Tzu are related, they are very similar-looking pups, however, they do have a few differences when it comes to their temperament, exercise, and training needs. For this reason, it is normally quite an easy decision for families to choose between the two.

The Lhasa Apso will suit a more active family and one who can handle his complex personality and guarding tendencies. Whereas the Shih Tzu would prefer a calmer household that will be willing to pay him a lot of attention! But whoever you choose, they are both equally loving and affectionate.