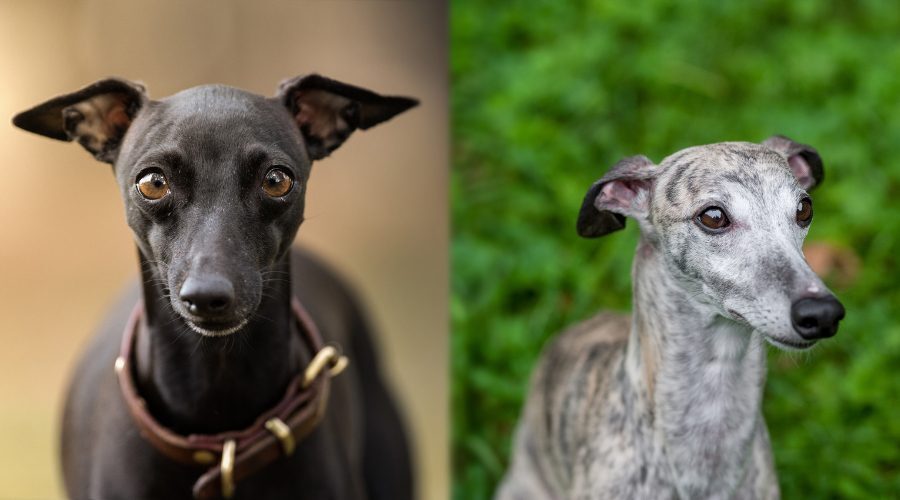 The Italian Greyhound and the Whippet are very similar pups, and this is entirely because they are both direct descendants of their larger cousin, the Greyhound. They are also sometimes bred together, resulting in a popular whippet mix.

However, there are some differences which set them apart from one another. The most obvious difference is their size, with the Italian Greyhound being a small toy breed, and the Whippet being a medium sized pooch.

So, whether you’re here to help you decide which breed may be better suited to you and your lifestyle, or you’re here simply to give yourself a doggy education, read on to discover the finer details of their differences and their similarities.

The Italian Greyhound is believed to have originated from the Mediterranean lands around 2,000 years ago. During the 16th Century his popularity boomed in Italy, as miniature dog breeds were seen as a wealth symbol amongst the aristocracy and the upper classes, and as such they were in high demand. It was here that he was given their name, the Italian Greyhound. He was first registered with the American Kennel Club (AKC) in 1886, and it was America who saved this breed from becoming extinct in the war stricken European lands during the World Wars.

The Italian Greyhound is the smallest of the sighthounds, but he is still mighty quick and powerful. He was originally used as a small game hound, however, he is now more commonly found in family homes as companionship dogs. The AKC has ranked him as the 73rd most popular dog in America today, and because of his small stature he finds himself amongst the other toy breeds.

The Whippet is a medium size dog who is relatively new in the canine world, and he was only developed as a breed in the last few centuries in Victorian England. He was engineered to have the same qualities as the Greyhound, but simply to be much smaller in stature, and this is where he inherited his nickname, the ‘poor man’s Greyhound’. It is believed that he was created through breeding Greyhounds and long-legged Terriers. He is much smaller in both height and weight, but he still kept his power to hunt rabbits thanks to his fast speeds of up to 35 mph. Although his forefather, the Greyhound, still retains his title as the world’s fastest dog, the Whippet is the world’s fastest accelerating dog.

He first came to North America in the early 20th Century to be used in dog racing and hunting. He is now the 61st most popular breed in America according to the AKC.

This is really where their differences end regarding their appearance. The Italian Greyhound is simply just a mini version of the Whippet! They have the same long arching back and deer like legs. They have a narrow skull held tall by a swan shaped neck. They both have large round dark colored eyes, a narrow muzzle and small rose shaped ears. All of their features should be dark in color, such as his nose and eye rims.

They both have a short and smooth coat, which is shiny in appearance. They both have a wide variety of coat colors, the full breed standard of the Whippet states that his coloring is immaterial, and he is often found with brindle markings, whereas the full breed standard of the Italian Greyhound states that he is not allowed to have any brindle shading whatsoever.

Both the Italian Greyhound and the Whippet are very similar in their temperament, in that they are gentle dogs with a calm demeanor. If you are seeking a quiet dog that does not bark often, then these guys both definitely fit that requirement. They make for one of the best snuggle buddies, in that they will happily laze on the sofa all day long if you’d allow them too.

They make a great companion for small children as they particularly gentle creatures. They are very affectionate with their immediate family, however, they are known to be slightly timid with strangers. Because of their timidity, they do not like to be left alone for long periods of time, and are known to suffer with separation anxiety.

Despite their laziness, they are known for having short outbursts of energy, and they are known in the canine kingdom, and the zoomies. The zoomies often last up to five minutes and these sessions include running around the house super-fast in circles, leaping up onto sofas and digging into the floor. If you do have one of these guys then you should not leave expensive or sentimental ornaments on side units, for if they get a mega case of the zoomies they might accidentally bump into them! Holly the Whippet shows us perfectly what these zoomies are on her video, and they are a great source of fun entertainment for the whole family.

Being sighthounds, they will both run after smaller animals without much, if any, warning, even if they have never been used for hunting or entered a racecourse before. For this reason, they should never be allowed off the lead in a public area, and your yard should be enclosed and reinforced as they can easily jump fences. For this reason, they only suit households that do not have other small pets such as rabbits or guinea pigs, because it is in their D.N.A to chase them. Neither of these guys are known to chase cats, unlike their larger Greyhound relative.

Despite their racing and hunting background, many people are surprised to learn that they are not high energy dogs. They are very laid back (borderline lazy) and they only require short sessions of intense exercise. These guys are medium energy dogs who would enjoy two brisk walks a day. If you have access to a reinforced yard or play park, then would really appreciate a visit to expel their hound energy! Lure coursing is the perfect way for these guys to release that energy by chasing a mechanized object that stimulates the unpredictability of wild animals, but in a controlled and safe environment.

The Italian Greyhound and the Whippet are often difficult to train, as they are independent and often stubborn. They would much rather have a lazy afternoon watching movies than partake in training sessions. For this reason, early obedience training is important to distill a basic level of discipline into their routine, even if they aren’t interested. Short and fun training sessions are advised, and even if you feel that you aren’t progressing with your pup, strive on and be consistent.

Their shared timidness means that it is really important for them to be socialized from a young age so that they grow up being comfortable with all humans and animals alike, and in unfamiliar situations. It is also important that the positive reinforcement method is utilized in their training, otherwise their nervousness will extend to their immediate family and their master.

The Whippet National Breed Club suggest that he is tested for the following:

Brainstem Auditory Evoked Response Test – also known as BAER, and this is to establish a normal level of hearing in both of his ears.

Ophthalmologist Evaluation – he should be screened for several eye conditions, such as Progressive Retinal Atrophy.

Cardiac Evaluation – heart disease is the leading cause of death for whippets in older age.

The Italian Greyhound National Breed Club suggest that he undergoes an Ophthalmologist Evaluation similar to the Whippet, as well as the following issues:

Hip Dysplasia – this is an abnormal formation of the hip joint which can cause painful arthritis.

Thyroid Evaluation – this thyroid is the gland that controls all hormones and metabolism and can cause a multitude of related health issues if it does not function at a normal level.

Luxating Patella – put simply, this is a dislocated kneecap that will cause pain and discomfort.

Because they are both skinny with thin skin, they are prone to frostbite and hypothermia, so for this reason, in the winter you must invest in a doggy coat to avoid this. Additionally, they are both sensitive to anesthesia, so if for any reason they have to visit the Veterinarian and require any form of surgery, then be sure to remind the Veterinarian of this.

Despite the Italian Greyhound being disposed to slightly more health issues, he will generally live slightly longer than the Whippet.

The Italian Greyhound will eat between ½ and 1 cup of food every day, whereas the Whippet will eat slightly more at 1 to 1 ½ cups of food a day. They are partial to a snack or two throughout the day, so it is advised that their treats are monitored to ensure that they do not become too big for their tiny frame.

Neither dog is prone to becoming obese, simply because if their genetics.  Both dogs love to run, so you should make sure you are providing your dog with enough space to have proper energy outlets throughout the day.  Since both of these pups have faster metabolisms, you can free feed them but you’ll still want to keep an eye on their food habits.

The Italian Greyhound and the Whippet are very low maintenance when it comes to their short and smooth coats. Whilst they do shed, they shed little, and as such they will only require brushing once a week. These guys will not need to be bathed often either, so once every two months or so will suffice. They both have very thin skin, so whilst brushing them be sure to watch out for skin infections and treat them appropriately.

Because of their narrow jaws, both the Italian Greyhound and the Whippet suffer with dental problems, so their teeth need brushing with doggy toothpaste a few times a week. Not only does this keep their breath smelling fresh, but it also prevents other periodontal diseases.

The price of the Italian Greyhound, being the smaller of the two, starts from $500, whereas the cost of the Whippet starts from around $800, both from a reputable breeder. Of course, if you are seeking puppies from a particular champion bloodline then you can expect to pay much more than this, heading into the region of a few thousand dollars.

Overall, both the Italian Greyhound and the Whippet are very similar dogs because they are related to one another through their forefather, the Greyhound. They look so similar that the Italian Greyhound looks like the younger sibling, and the Whippet his older brother. It is their size difference that is often the deciding factor for prospective owners, as their temperaments are almost identical too.

Being the larger version, the Whippet needs slightly more exercise and food than the Italian Greyhound, and he is a lot faster should you accidentally let him off-leash!

They are both fantastically fun with their 5 minutes zoomies, but calm and gentle for the rest of the day, and they both make equally great family pets!

I have 2 Italian Greyhounds and they are exactly how you described them on this web page. My younger dog seems to resemble the characteristics of a whippet - in terms of her length, width, and weight so I think she may actually be a whippet. I found this page to be extremely informative.