Considering the Golden Retriever or the Siberian for your next dog? These are two of the most well-known dogs in the entire world and for several good reasons! Find out how these two breeds differ, and which is a better fit for your lifestyle. 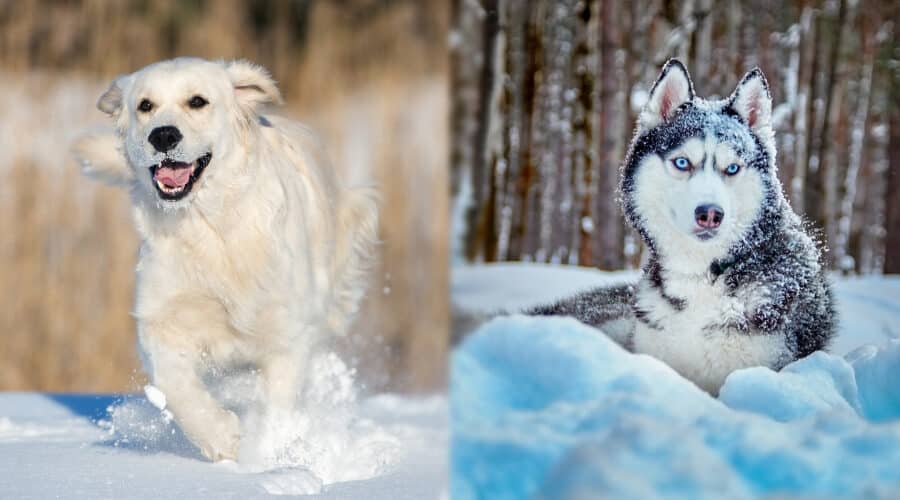 Comparing the Golden Retriever vs. Siberian Husky for your next family pup? Perhaps you are just curious about these two breeds and how they differ? Maybe you’ve whittled your next family addition down to the Golden Retriever and the Siberian Husky, or are stuck about which breed to choose? Look no further readers, because here in this guide we provide all the doggy details you’ll need.

The Golden Retriever and the Siberian Husky are very different looking pooches. Their personalities are similar in some ways but very different in others. They also have different exercise, training, and nutritional needs.

If you are about to welcome one of these lucky guys into your life, you need to be sure that you can give them everything that they need. So, let’s take a look at each breed to compare their differences and similarities.

They began their journeys at different times and places. It is vital to look at their history to give you an insight into what they might be like as family pets.

The Golden Retriever began his journey in the second half of the 19th century across the pond in Scotland, Great Britain. Cleverly bred from a variety of gundogs, the Golden Retriever was created to be the perfect gundog. He was so impressive in both his hunting talent and beauty that he traveled to America with immigrants, and he has been a big hit ever since.

According to the AKC, the Goldens are ranked 3rd in their comparison of most popular breeds in the United States. He is a hit with young families, elderly grandparents, and everyone in between. Because of his amazing personality and family friendliness, Goldens also make a popular mixed breed dog.

The Siberian Husky is an ancient dog breed that goes back thousands of years. He was first bred in Siberia, Russia, to be a sled puller to transport goods and people across vast expanses of the icy land. After a hard day’s work, he was also welcomed into the family home to keep his family company.

According to the AKC, in 2020, he is the 14th breed on the popularity list in the United States. He is popular with active families who can guarantee his high energy levels, and those living in colder climates. Like Goldens, they are also popular parents to several mixed breeds.

Their appearance is where the Golden Retriever and the Husky are very different. Other than their similar size, they are almost entirely different in their appearance. They both fall between 22 and 24 inches tall, with the females generally being smaller than their male counterparts.

The Goldens are slightly heavier, weighing between 55 and 75 pounds in weight. The Siberian Husky is leaner and weighs between 35 and 65 pounds.

Their coats are both thick to keep them warm and double-layered as a weather-resistant shield. The Golden Retriever’s coat is longer and silkier, with feathering fur around his neck, ears, belly, and tail. The Husky’s coat is a little fluffier and thicker.

The Golden Retriever sports his famous golden color, ranging from almost white to golden red, which is solid across his body. The Husky has a lot more color variation, as well as markings and facial masks too. He can be gray, red, brown, black, white, a mixture of them all, with or without markings or facial masks.

The Husky is also famous for his bright blue eyes, or different colored ones. In contrast, the Golden Retriever favors the dark brown eye colors. Overall, Goldens are known for their graceful exterior, and the Siberian Husky is known for his striking appearance.

Golden Retrievers are fun and friendly. Many think of them as the ideal family dog. He is sociable and affectionate. He’s also not too in your face or flamboyant. Goldens are loyal, devoted, and know when to behave and when to chill. He is adaptable to the needs and emotions of his human family, especially compared to the Husky.

The Husky, on the other hand, is a wild child. He needs to be the center of attention. He’s also the flamboyant soul of the party, whether that be with friends or strangers. While huskies can relax with the family, they would much rather be playing a game. Some families find the Husky too much to handle, but some adore his canine personality.

Goldens are known to be mouthy. They are trained to pick up prey gently and have a “soft mouth”. Their mouths are so soft, they can carry an egg without crushing it. This is another reason why he is a top pick with families with young children. Even when play fighting, he is so gentle.

The Husky, however, is not always aware of his strength even when he is playing. He is also mouthy, but this can be borderline nippy. This is one of the many reasons why the Siberian Husky is best suited to families with older children. Not only this, but he is also bouncy and hyper.

He will need a lot of playtime. His playmates need to be stronger than him so that they will not be knocked over on accident. It is his silly personality that makes him a brilliant family addition for active families who want a crazy canine.

The Golden Retriever, being an original sporting dog, needs a lot more exercise than most people think. He will need around 60 minutes of exercise every day. Being intelligent, it would be great if you could mix up his activities. He also loves the water, and he would really appreciate a dip in his local lake.

The Husky has one of the highest exercise needs in the canine kingdom, which is a lot more than most families can handle. This is a big reason why he often ends up in rescue centers, simply because families underestimated just how much he needs. He must be exercised for at least 90 minutes every day, and the exercise needs to be vigorous and intense. Without it, he can become problematic and very unruly and will become nippy and destructive.

They both need more exercise than your average pooch. Their exercise needs are the most significant factor to think about if you are trying to pick between the two breeds.

Both of these guys are very intelligent. However, the Golden Retriever is much easier to train compared to the Husky. One of the main reasons why Goldens are selected to be assistance dogs is because they are devoted and loyal. Combining this with his intelligence makes him a doddle to train.

The Husky, however, is super stubborn and independent and is only trainable when he wants to be. This makes training sessions a bit trickier, and you will need to keep his attention by keeping training sessions short and exciting.

Just like any dog, they both need early socialization and obedience training. All of which should be strengthened with positive reinforcement training. Just because the Retriever is always a teacher’s pet doesn’t mean he automatically becomes one without training. You still need to put in the hard work.

If you are after a fully obedient dog, then the Golden Retriever might make the better option for you. Or, if you are an experienced dog owner and love a canine challenge, then the Husky can offer you that.

The Siberian Husky is one of the healthiest dog breeds in the world, and he enjoys a lifespan of 12 to 14 years. The Golden Retriever is also a healthy dog, but he has his fair share of health concerns like any other purebred dog. He lives between 10 to 12 years.

They are both susceptible to suffering from hip dysplasia, and a variety of eye conditions such as progressive retinal atrophy, cataracts, and collie eye. Goldens are also known to suffer from elbow dysplasia, cardiac concerns, and a condition called neuronal ceroid lipofuscinosis.

One thing to take note of when thinking about Goldens is that there is a high rate of cancer in the breed. It has been found that around 61% of Golden Retriever deaths were due to some form of cancer, which is very high. This is always something to think about when welcoming one of these guys into your life.

As with any dog breed, always ask to see your potential new doggy’s parents and a copy of their health certificates. Although you are never guaranteed a fully healthy dog, at least if his parents are healthy, you can be sure that he has the best chances of being so too.

The Golden Retriever and the Siberian Husky both eat around three cups of kibble every day. It is always important to look at the needs of your pooch because he may need slightly more or less depending on his size, energy levels, and age.

Both of these guys would do well on a high-quality kibble that provides him with high protein content and plenty of energy for their busy days. A well-balanced diet is vital, and as long as the kibble is age-specific and of good quality, it should provide them both with everything that they need.

The Golden Retriever is likely to be more interested in food than Husky, and he also has a slower metabolism. So be sure to keep an eye on his weight to make sure that he never becomes obese. You will rarely see an overweight Husky, so this should not be an issue.

Both the Golden Retriever and the Husky should be groomed regularly every week to brush away the dead hair and dirt. Not only will it keep their coat looking healthy and shiny, but it will boost your bond with them too. As they both have thick coats, you would benefit from investing in a de-shedding tool.

The Golden Retriever has longer and feathery hair around his ears, neck, belly, and tail. So he will need a little bit more care and attention when compared to the Husky. In addition to the de-shedding tool, a slicker brush would also make a great choice for the Golden Retriever’s coat.

As he is one of the top three favorite dogs in America, there are a lot more Golden Retriever breeders vs. Husky breeders. This might explain why the Golden Retriever is a little bit less expensive compared to the Husky. The average cost for a Golden Retriever puppy from a reputable breeder will start from $800. The price for a Husky usually starts from $1,000.

The general day-to-day living costs of owning a pooch are the same for both breeds. Just remember that the Golden Retriever, with his heightened health concerns, might cost more across his lifetime in vet bills. But generally, this is no more than the average pooch.

So there you have it. We’ve now compared all the differences and similarities between the Golden Retriever vs. the Siberian Husky. They are both gorgeous and delightful dogs, but each breed might appeal to one family more so than another. It is dependent on your canine preferences and circumstances.

If you are seeking a glamorous dog who is both fun and chilled, energetic and calm, then the Golden Retriever might be your best option. He is much easier to train and very devoted and loyal too.

The Siberian Husky is more suited to a thrill-seeking energetic family who can give him all the attention that he needs. He is more stubborn and challenging than the Golden Retriever, but this is a big part of his charm.

Most Aggressive Dog Breeds: What Breeds Are Considered Dangerous?