The German Shepherd vs. The Golden Retriever: Breed Comparison & More 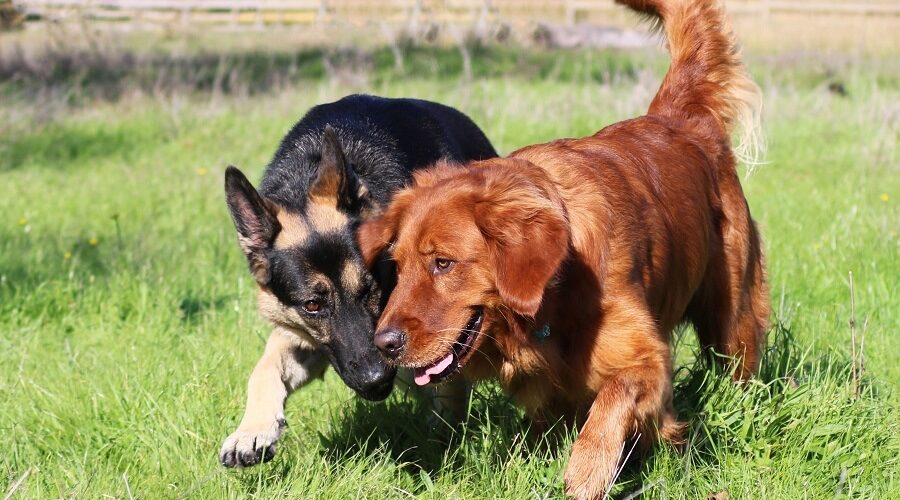 What makes these dogs so desirable? They have different temperaments and appearances. They also have distinct histories.

Both have outstanding attributes that make them a great addition to any home. These dogs are loyal, fun-loving and great with children.

In this article, we’ll describe their characteristics in more detail so that you can decide which type of dog is best for you or just learn more about the different breeds.

German shepherds were first bred in Germany for herding sheep. Although the shape of their bodies and ears are similar to wolves, German shepherds are a relatively new breed.

Before the breed was standardized, any herding dog in Germany was referred to as a shepherd. In the late 1800s, however, breeder Max von Stephanitz was impressed by a dog at a competition. He purchased the dog and began to breed it to maintain the intelligence and distinguishing features of what we now recognize as a German shepherd.

He was more interested in breeding dogs that were intelligent, hard-working and useful than producing a good-looking specimen. He managed to do both.

German shepherds are medium to large dogs. The average weight for a male German shepherd is 66 to 88 pounds. The height at the withers, the area where the neck meets the shoulder blades, is about 24 to 26 inches for male shepherds. Females may be a little smaller.

These dogs have a long, square muzzle and medium-sized eyes. Their large, pointed ears stand upright and face forward.

Some puppies have floppy ears until the cartilage develops completely. The ears may move back when the dogs are moving.

They have long, bushy tails and a long neck. Their double-layered coat is usually of medium length, but it can be long. It provides warmth during the cooler months, but the underlayer sheds so that the breed can better handle the warmer seasons.

Most commonly, German shepherds have tan or reddish fur with black along the muzzle, back, and tail. However, they can be all sable, white or black. Rare varieties are silver or liver colored.

German shepherds are considered to be the third smartest dog breed, after the border collie and poodle. In his book “The Intelligence of Dogs,” Stanley Coren reported that German shepherds will follow the first command given 95 percent of the time.

Moreover, they like to learn. As working dogs, these animals need to be mentally stimulated.

Obedience training is one way to keep this dog working hard all day. You can also easily teach most German shepherds tricks or lead them through agility drills.

White German shepherds are bred to be calmer than those with variations in their coat color. If you’re worried about adopting a high-energy dog, you might consider looking for this mellow variation.

However, German shepherds still have high exercise needs. They should be walked at least twice a day for 30 minutes. They love to play fetch and Frisbee. They may even be more motivated by this type of play than they are by their dog food, which is important to note if you’re trying to train them by rewarding them with something that they like.

German shepherds make great guard dogs and family dogs. They’re extremely loyal and protective. They may not warm up to strangers immediately. You should socialize them properly so that they learn that new people aren’t always threats.

The golden retriever is a sporting dog that originated in Scotland and England. The breed was developed by gamekeepers who wanted them to help hunt waterfowl.

The breed is likely a combination of Tweed water spaniels, Newfoundlands, and Irish setters.

Although the breed was created in the mid-1880s, the color was not standardized until 1925. Golden retrievers come in many shades, including light cream, golden, dark gold, and red gold.

This medium-large breed is built for strength. British golden retrievers are more muscular than the American type, which is lankier. A male golden retriever should weigh about 65 to 75 pounds.

However, golden retrievers have a greater tendency than other dogs to become overweight. That may be because these dogs have mastered the art of begging. These dogs love to eat.

They’re also fun to train, and many owners reward their goldens with extra treats without adjusting their regular meal sizes. At its ideal weight, a golden may appear thinner than what most people are used to seeing.

A golden retriever’s coat is usually medium or long. These canines have a wavy, water-resistant topcoat that doesn’t shed much. The fur feathers at the chest, tail, and hindquarters.

Their undercoat is dense and fluffy. It sheds copiously in the spring and fall.

Brushing the dog regularly will help control the shedding. You should also bathe goldens occasionally. Some owners shave or clip their golden retriever, especially during the summer. If you groom your dog properly, clipping or shaving is unnecessary.

The dog’s double coat actually works to keep it cooler in the summer. If you shave it, it may not grow back properly to keep the animal warm in the winter.

Golden retrievers are known for their friendliness and confidence. They’ll bound up to anyone, wagging their tails and hoping to play.

This makes them less than ideal guard dogs. However, they are known to bark and will often let you know if someone is at the door.

If you want a dog that loves to play, the golden retriever will keep you busy. They have natural retrieving instincts. Therefore, they’ll play fetch incessantly.

Golden retrievers also love the water. If you enjoy fishing, boating or going to the beach, a golden can be a great companion.

Even though golden retrievers can be so enthusiastic that they’re goofy, they’re not dimwitted. This breed ranks just below the German shepherd in intelligence.

What makes up a dog’s smarts? It’s a combination of instinct, adaptability and obedience. Because golden retrievers are eager to please, they’ll follow your commands.

They’re also food-motivated, which means that they’ll do just about anything for a treat. It’s easy to condition them to behave the way that you want them to.

Purebred dogs are more likely than mutts to have health problems. That’s because they inherit genetic disorders from their bloodline. Breeds have been standardized based on their appearance, and line breeding can heighten health complications.

German shepherds and golden retrievers are also fairly large dogs. Many canines of their size are predisposed to joint issues. Both of these breeds are likely to have hip dysplasia or looseness in the hip joints. The condition can lead to arthritis in these dogs.

European-bred golden retrievers don’t get cancer as much as American-bred breeds. That’s because they have different DNA.

Still, goldens don’t have the highest rates of cancer among dog breeds. Both German shepherds and golden retrievers can lead healthy lives as long as they get plenty of exercise, regular exams and lots of love.

Although both types of dogs want to please their owners, the German shepherd is probably easier to train, in general. They learn commands quickly, and you don’t have to repeat orders frequently.

A golden retriever, on the other hand, listens well but can take time to follow commands. This is especially true if the dog is distracted by food or movement.

Do you still have questions about the German shepherd vs. golden retriever? Here are some common inquiries about the breeds.

Golden retrievers and German shepherds both have thick, double-layered coats and both shed. However, the Golden may shed more and require additional brushing and bathing

No dog is 100 percent hypoallergenic. However, there are some breeds that are easier for allergy sufferers to handle. Those dogs have coats that don’t shed and produce less dander.

Neither German shepherds nor golden retrievers fall into this category.

Do German Shepherds or Golden Retrievers Bark a Lot?

Barking is a form of communication, and both of these breeds are known to be fairly vocal. German shepherds tend to bark because they’re bred as guard or herding dogs.

Barking placates the German shepherd’s guarding instinct. These animals will often bark when they feel threatened.

Golden retrievers usually bark to get attention. They may be telling you that they want to play or that a stranger is at the front door.

Socializing and training your dog can go a long way in curbing this undesirable behavior. Working with a professional who understands the breed can ensure that your guard dog does its job when you’re not home but doesn’t try to attack your friends when they come for a visit.

Which Would Make a Better Guard Dog?

Both breeds of dogs could alert a family if there were an intruder on the property. However, German shepherds were bred as protectors. They’d likely be a better guard dog.

Golden retrievers are more trusting of strangers. They may let you know if they perceive a threat, but they don’t have the same guarding instinct as German shepherds.

Are Golden Retrievers Less Likely than German Shepherds to Bite You?

You may have heard that golden retrievers have soft mouths. They can carry things in their jaws without damaging them, which helps them retrieve people’s hunting trophies.

They can even be trained to hold a raw egg in their mouths without damaging it. However, they still have teeth, and they have the potential for mouthiness.

Some people think that German Shepherds have locking jaws. However, that’s just a myth. Still, a German shepherd may be more likely than a golden retriever to bite down hard.

Either breed can bite aggressively if it feels threatened or provoked. All dogs can nip and snap. Problematic biting behaviors should be addressed with professional training.

Is a German Shepherd or Golden Retriever Better for a Family?

Both of these breeds are relatively gentle, quiet, friendly and outgoing. Some people associate German shepherds with aggression. That’s often because they are bred from military stock and used in roles that require them to respond to threats.

But either breed would be ideal for a family. Every dog’s personality is different.

Getting one of these dogs at an early age can help you train it to work with your family’s needs. On the other hand, you can adopt an adult whose temperament is already established. Both breeds are adaptable and can do well as service animals or family pets.

Two of the most popular dog breeds in America have similar strengths. They’re intelligent, playful, adaptable and friendly. German shepherds and golden retrievers are generally good with children and other pets.

If you’re looking for a working dog, a German shepherd probably has more endurance and agility than a golden retriever. However, that’s not always the case.

Golden retrievers tend to be trusting of many different people. They would be ideal for a larger family or a therapy environment that requires them to meet strangers frequently.

German shepherds are great guard dogs. They’re just as loyal as golden retrievers, but they may be more protective of their owners. You need to make sure to socialize them properly so that they don’t become overprotective.

Give both of these dogs plenty of attention. When they’re bored, they may exhibit undesired behaviors, like barking, chewing and scratching.