If you need a trusty companion who switches seamlessly from field to couch, consider the loyal German Longhaired Pointer. Let's explore the history and characteristics of this fascinating and rare breed. 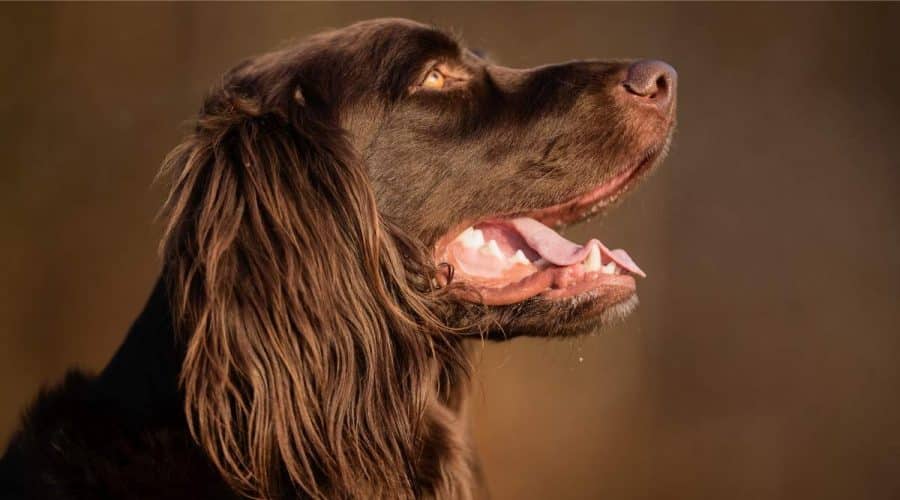 When you buy something through one of the links on our site, we may earn an affiliate commission.

Artifacts and fossils provide evidence that early civilizations used dogs for hunting as long as 9,000 to 12,000 years ago. While the earliest hunting dogs appear to have run down their prey, as the human/canine partnership evolved, so did hunting techniques. People began using dogs to find and capture their quarry.

Setters and pointers soon developed, and in earlier times, setters would “set,” which means lie down, when they detected prey, allowing the hunter to net their game over the dog. Pointers stood to attention with one front leg raised and knee bent, pointing towards the hidden animal. Nowadays, breeds of both types point towards their quarry. For hundreds of years, hunters have been working on breeding the perfect hunting companion. Pointers and setters were the product of this attempt to create the all-around dog.

While we typically think of the difference between setters and pointers today being a matter of coat length, the German Longhaired Pointer has a longer coat like one of the setter breeds. The GLP is the continental version of a setter and a direct result of the quest to create the all-around hunting dog. He searches, points, tracks, and retrieves game on land or water. Like all German pointers, the German Longhaired Pointer has webbed feet, making him exceptionally skilled in the water.

The German Longhaired Pointer is one of the oldest breeds of Pointer from the European continent. Created by German hunters to flush game for falconers and net hunters, when gun hunting became the dominant form of the sport, the new breed evolved as a versatile all-around field hunter. Hunters combined the bloodlines of bird, hawk, and water dogs and German scent hounds called Deutsche Bracke to establish the breed in 1879. In 1897, Baron von Schorlemer’s breed standard for the German Longhaired Pointer was established and thus laid the foundation for today’s purebred dog.

German Longhaired Pointers are affectionate with family and easygoing overall. They’re lovable dogs who switch easily between devoted family companions and serious gun dogs. Calm and loyal, GLPs have steady temperaments. They tend to accept strangers, although some bloodlines may have more protective tendencies than others. They have a unique ability to switch from a peaceful companion to a fierce hunter upon demand.

The GLP is highly trainable. His background as a jack of all trades makes him versatile and biddable. Eager to please his family, the GLP is obedient and not only good with children but with other dogs as well. They have lots of energy and, if not used as active hunting dogs, will need ample exercise and a securely fenced yard. Young German Longhaired Pointers can be boisterous and may need to be watched around the young or elderly until they are fully mature.

Because they were bred to hunt, GSPs have razor-sharp instincts for anything that could pass as prey, such as squirrels, birds, or rabbits. They need to be carefully socialized with cats or may chase them as prey. This prey drive might cause them to bolt during off-leash exercise and scale fences or walls in pursuit of their quarry. Keep your GLP in a well-secured area, and approach all off-leash activity with caution and adequate awareness of your surroundings.

The German Longhaired Pointer is a medium to large dog standing between twenty-two and twenty-eight inches at the shoulder. They range in weight from fifty-five to eighty pounds. Per the breed standard, smaller dogs must have plenty of substance, but agility is more important than mass. This athletic hunter’s companion is solid and muscular, a low-set graceful dog with flowing lines. European oil paintings and copperplates featuring hunting and hunting dogs often featured this beauty.

As the breed’s name suggests, great importance is attached to having the correct coat. This Pointer’s coat is medium length, about three to five centimeters long on his back and sides, sleek in texture, and smooth or slightly wavy. His coat may be longer on the underside of his neck, chest, and belly. The breed is feathered but less than a traditional setter breed. The hair on the ears is wavy and feathered, as are the backs of both front and hind legs above the hocks. His tail is plumed.

The German Longhaired Pointer’s color is also beautifully distinctive. He is a brown or brown and white dog, but the ways the brown and white mix within his coat are varied. In the traditional bird dog style, he can range from solid brown to brown with white or speckled markings, especially on his chest and feet. His coat may be dark or pale brown roan (roan is an effect of colored and white hairs blended evenly throughout the coat) with solid patches and a solid colored head with white markings like a horse. He may be mottled, with many small brown spots on white background or brown and white, either with pure brown patches on white or with very few small spots, and may even have fawn markings that are a throw-back to the Hounds in his lineage.

The GLP was bred to work in the field, and even if he’s not hunting for you, he requires ample exercise and space to run. As with many active breeds of similar size, he can be a handful as a younger dog and needs a securely fenced yard to run off some energy. His athleticism can power unexpected escapes, and he can jump a six-foot fence. Because the GLP gets along well with other dogs, a trip to the dog park can provide him a chance to burn off some energy.

They’re devoted family members and crave attention and interaction. The GLP may develop destructive habits and separation anxiety if left alone for extended periods. A large, securely fenced yard is a must for this energetic pup but may not be enough to fulfill his physical and mental engagement needs.

Expect to spend quality time with your German Longhaired Pointer walking or jogging or some other form of activity above and beyond the time he spends in the yard. Although this Pointer may be slightly less energetic than the German Shorthaired Pointer or German Wirehaired Pointer, he still needs about an hour of intense exercise per day, preferably more than once daily. Puppies and senior dogs need less and limit strenuous activity on hard surfaces to minimize stress on growing or aging joints. Because of their energy level, GLPs aren’t well suited to apartment life.

German Longhaired Pointers are very trainable and eager to please but require more patience than a typical retriever. Naturally intelligent dogs who quickly pick up new commands, GLPs require gentle training. They are sensitive to harsh corrections and need a quiet and fair handler. Like most dogs bred to work alongside humans, the GLP wants to be with his family. He’ll fill the time with undesirable behaviors if left alone for long periods. Early socialization and puppy training classes are recommended and help ensure that the GLP grows into a well-adjusted, well-mannered companion.

German Longhaired Pointers were created to be hunting dogs. After basic obedience training, work with your GLP to retrieve a decoy, and then train your dog to seek the trail by scent. Use a spray scent to teach him how to follow the scent trail. The transition to working in the field will be the actual test of his readiness. The two of you will be ready to flush and retrieve downed birds before returning at day’s end to the comforts of home and hearth.

German Longhaired Pointers aren’t just used to hunt dogs. They are household companions. GLPs are quick studies but respond better to loving praise than to strict repetition and, like a teenager, may rebel if pushed too forcefully. They do not tolerate harsh reprimands or negative-reinforcement training. If you want your GLP to be able to handle time away from you during the day, you must spend quality time with him as a house dog, not just a field dog.

Per the American Kennel Club, the German Longhaired Pointers is a robust breed with no known congenital problems. Good breeders utilize genetic testing to reduce the likelihood of disease in their puppies.

The average adult German Longhaired Pointer will eat approximately three to four cups of food per day. The amount your specific dog will need to stay healthy will depend on weight, age, and activity level. Feeding the best quality nutrition that you can afford may be more cost-effective in the long run than skimping with a bargain brand kibble.

Choose a high-quality formula that matches your pup’s age to keep this active breed healthy and reduce the health risks associated with dysplasia. Feed according to the weight chart on your food brand, and keep an eye on his body condition to adjust his intake as needed. A high-quality kibble including meat protein, fiber, healthy carbs, omega-3 fatty acids, vitamins, and minerals will meet your GLP’s nutritional needs. You’ll be less likely to need additional costly supplements.

The German Longhaired Pointer’s medium coat needs attention a few times per week or more if he spends much time outdoors. You’ll need to brush him almost daily to remove any dirt and debris he picks up outside. A slicker brush will help you remove dirt and mats from their coat, and you can follow up with a bristle brush to make their coat shine. He has short hair between the pads of his paws, so check between his toes and behind his ears daily for mats or burrs he may have picked up outdoors.

Regular brushing stimulates blood circulation and distributes oils throughout his hair so that even his rough coat glows with health. When seasons change, GLPs will shed their undercoat and benefit from being brushed with an undercoat rake to remove this extra loose hair. The two main shedding seasons are spring and fall, with the spring shed more pronounced.

Look for a reputable breeder who screens breeding animals for genetically linked conditions. You may expect to pay from $900 to $2,000 for a German Longhaired Pointer from a breeder. They’re not as readily available as the German Shorthaired Pointer or the German Wirehaired Pointer. Be sure the breeder you choose stands behind the health of their dogs.

Be sure to consider adopting a German Longhaired Pointer. Although they are on the rare side, a lonely pup could be waiting for his forever home at a shelter near you. Adopting a dog is less expensive than buying from a breeder.

As your new best friend adjusts, give him lots of attention and playtime. Throw a ball for him and allow him to show off his hunting skills and settle in. Don’t forget to give him adequate exercise often to keep him from becoming bored and anxious.

In general, this breed is:

The German Longhaired Pointer’s ability to switch from hunter to buddy makes him the perfect pick for the hunting family. Obedient and active. A perfect blend of hunting dog and family companion, the GLP is an ideal fit for active, outdoorsy families and individuals.