English Mastiff vs. Bullmastiff: How Are They Different?

Are you looking for a gentle giant and can't decide between the English Mastiff vs. the Bullmastiff? Both breeds come from the Mastiff family but have many differences to consider. We compare both breeds, including puppy costs, health, nutrition, and more! 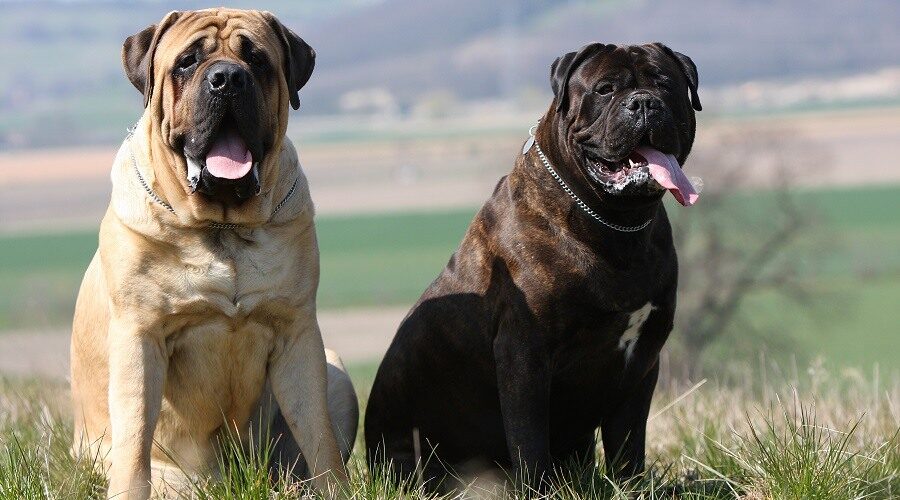 Both breeds come from similar origins, but they are truly quite different overall. Both breeds make fantastic family pets and are quite popular across the US and England, but some people choose other breeds because of the sheer size of both of these gentle giants.

Make no mistake, if you bring either of these pups into your home, you are making a commitment to bringing a human being sized dog into your home. There are other breeds of mastiffs (like the American mastiff) that have popped up in recent years, but these two breeds are classics.

Contrary to general belief a Mastiff isn’t a breed itself, but it is an umbrella term that describes a group of dogs of similar sizes and statures. There are in fact at least 18 different types of Mastiff dogs, and there is debate as to whether there are more. For example, most people aren’t aware that the German Mastiff is more commonly known as the Great Dane! Both the Bullmastiff and the English Mastiff fall into the “Mastiff” family.

The English Mastiff originated from England and has been around for centuries. Julias Caesar even described them during his invasion of Britain in 55 B.C. as impressive defenders of the land who fought alongside soldiers. He was so impressed by them that he took them back to Rome and used them as gladiators to fight against lions and other beasts (and sometimes men!) in the arena.

The Bullmastiff is the result of breeding an English Mastiff with an English Bulldog, and after several generations, they were officially recognized as a breed in their own right in the mid-1920s in Britain and shortly followed by the US in the early-1930s. The Bullmastiffs nickname “The Gamekeeper’s Night Dog” is fitting as they were originally bred to be swift and courageous enough to catch a poacher trespassing on his land at night, but trainable and intelligent enough not to maul him to death.

Both of these dogs are HUGE! So, if there’s no extra room in the inn, then I’m afraid neither of them is for you. You also need to consider whether you have enough room on your sofa for them, and if you haven’t, then either invest in a larger one or be prepared to get squished. Although from what I’ve heard, most Mastiff parents wouldn’t have it any other way!

As you can see in the table above the English Mastiff wins the award for being heavier, in fact, the heaviest dog on record was an English Mastiff named Zorba, who weighed a gigantic 343 pounds. This Guinness World Record was recorded in 1989 and he remains undefeated. So if your child ever asks for a Pony for Christmas you could probably get away with buying an English Mastiff!

Despite being the larger of the two dogs the English Mastiff is surprisingly suited for apartment life as they are docile creatures, and as long as they get their daily walkies they are happy to relax for the rest of the day.

Whereas Bullmastiffs on the other hand are not suited to apartment life as they are slightly more demanding when it comes to exercise. They do need a bit of rough and tumble to expel that extra energy which an apartment will not take kindly to.  Both dogs do well with crate training as long as the crate is big enough to give them ample room to stretch.

English Mastiffs can also have a fluffy coat (a very small percentage of dogs have this) but it does make note that a very BIG dog with long hair = lots of shedding!

Both the English Mastiff and Bullmastiff are more friendly and docile than their ancestors, but they are still courageous and protective of their family and their estate. They are similar in personality and are both loving gentle giants, who both make great family companions. But there are some slight differences in character.

The English Mastiff, despite his impressive stature, is a couch potato and loves nothing more than jumping on the sofa with his family for cuddles. Be warned though, they think they are the size of a Chihuahua and aren’t concerned with climbing all over you!

The Bullmastiff, however, is slightly more independent than the English Mastiff, and although he will still jump on the sofa and you, he isn’t as needy and will be happy in his own company for short periods of time.

The Bullmastiff is known to be slightly more territorial and hostile than the English Mastiff and will drive unknown animals from his territory, so it is important to ensure that you have fenced-in land. Of course, the English Mastiff will still let you know if there is someone untoward around, but they are generally more accepting of strangers in the household.  They both like to chew and have strong jaws, so make sure you equip them with toys that can handle some abuse.

Both the English Mastiff and the Bullmastiff are average on the exercise scale. The English Mastiff would happily chill with his family all day long. However, in order to keep this large unit healthy, he will require walks to get that heart pumping despite trying to persuade you otherwise.

The Bullmastiff, on the other hand, requires a little more exercise than the English Mastiff as he is a bit more playful and boisterous than his English cousin. Alongside their daily walks, the Bullmastiffs could do with a short period of active exercise such as playing fetch or tug of war, in order to expel some of that energy. This is more for his mental stimulation rather than for exercise.

You should be cautious of over-exercising both the breeds when they are young due to the fast rate at which their bodies grow, as this can affect their bone/joint growth. Ensure walks are kept short, don’t let them overexert themselves, and ensure that jumping off from heights such as the bed or sofa are kept to an absolute minimum, if at all. If in any doubt speak to your Veterinarian.

Both the English Mastiff and the Bullmastiff aren’t particularly easy to train as they do things in their own time, also known as ‘Mastiff Time’. It is said that the Bullmastiff is the slightly more stubborn one of the two, and this extra stubbornness can be blamed on the English Bulldog parent. It might come across that both breeds aren’t that smart, but it actually speaks more to their independence.

Due to the challenges, you may face training either of the two it is best that you start training them as early as you can. Due to their protective streak as a working guard dog socialization is very important. As always, consistency is the key to training, and the fact that they both love a Scooby Snack will help you keep them interested.

Both dogs are quite similar in terms of their health, and considering how big they are they can live very long and happy lives. Generally, they both share the same health problems such as Hip and Elbow Dysplasia, Gastric Torsion, also known as bloat, Progressive Retinal Atrophy which is the degradation of the retina leading to blindness.

Be aware that if you do own a Mastiff of any kind, then you should familiarize yourself with Gastric Torsion and the symptoms associated with it. If your pooch displays any of these symptoms, then you need to get him to the Vet immediately.

It would appear the only main difference in the Bullmastiff’s health compared to the English Mastiff is that they sometimes suffer from Brachycephalic syndrome. This is where they experience difficulties breathing because of the inherited English Bulldog’s flat face and snout. This can be treated with either medication or surgery, but it isn’t always an issue. On top of this, the Bullmastiff has a high tolerance for pain and this can make it difficult to identify when something is wrong with your pup.

Both the English Mastiff and the Bullmastiff eat. They eat a LOT. Expect to feed your dog anywhere from 6 cups of food per day up to 10. This is going to depend on their genetics and their size. You don’t want to underfeed either breed.

They also need similar amounts of dog food specifically for mastiffs or giant breed dog food that will meet their healthy nutrient requirements. Mastiffs will likely be on the higher end of that ratio, and Mastiffs need nutrient-dense dog food, especially when they are young. You’ll want a giant breed puppy food for both of these giants, otherwise, they won’t get the nutrition they will need as they grow.

Bullmastiffs will eat less, and cost less to feed. But they should still have a high-quality kibble, from puppyhood to adulthood. Either way, both dogs will be expensive to feed. Expect to pay over $1,000 per year in dog food expenses for an English Mastiff, and close to that for a Bullmastiff.

When it comes to Grooming, both of these pups have double coats and will shed year-round. Mastiffs and Bullmastiffs have two times per year where they “blow their coat” which means that they shed more than normal.

The wintertime is usually the worst, as they prepare for a thicker undercoat to prepare for the elements. Bullmastiffs may seem like they shed slightly less due to the fact they aren’t quite as big. But make no mistake, you’ll be dealing with dog hair no matter which breed you pick.

Both the English Mastiff and Bullmastiff have sensitive skin. The Bullmastiff especially in their facial area, due to the way their nose is formed genetically. You’ll need to make sure you dry your Bullmastiff thoroughly after any time they’ve been bathed. Not doing so can end up in unwanted infections.

Sensitive skin or oatmeal shampoo should be used during bathing sessions. Neither breed comes out ahead, and you’ll expect monthly grooming sessions for both.

The price of an English Mastiff starts from $1,500 from a breeder, whereas the price of a Bullmastiff starts at $1,000. You can expect to pay more for the pup dependent on their heritage and characteristics. Champion lines from either breed can fetch well over $2,000 for a purebred puppy.

Although the Bull Mastiff may be slightly cheaper to buy, both dogs will be expensive to insure as they age. Keep this in mind if you intend on getting dog insurance, which we recommend. Giant breeds are more expensive to insure, and the Bullmastiff can cost even more than the English Mastiff depending on insurance carriers due to their health concerns.

To recap, the English Mastiff and the Bullmastiff are similar in temperament; they are both sweet, loyal, and protective of their family and they both have a whole lot of love to give!

The other main difference is that the Bullmastiff is somewhat more active and needs slightly more energetic and playful exercise. So, if you have a yard and you are looking for a more athletic dog then the Bullmastiff may be the better option for you.

Lastly, the Bullmastiff is slightly more territorial and will guard his perimeter more often and more ferociously than the English Mastiff. So, if you are after more of a guard dog then maybe the Bullmastiff is the hero you are looking for. Or if you prefer a laidback companion then the chilled machine that is the English Mastiff might be preferable. Either way, they are both big-hearted doggos and they will love you and your family endlessly!