My Dog Is Breathing Heavily Through Their Nose. What Should I Do?

Is your dog having trouble breathing? Or maybe he's panting more than usual? Veterinarian Rebecca MacMillan helps you understand why that might happen, when it's time to take your dog to the vet, and how to treat breathing issues. 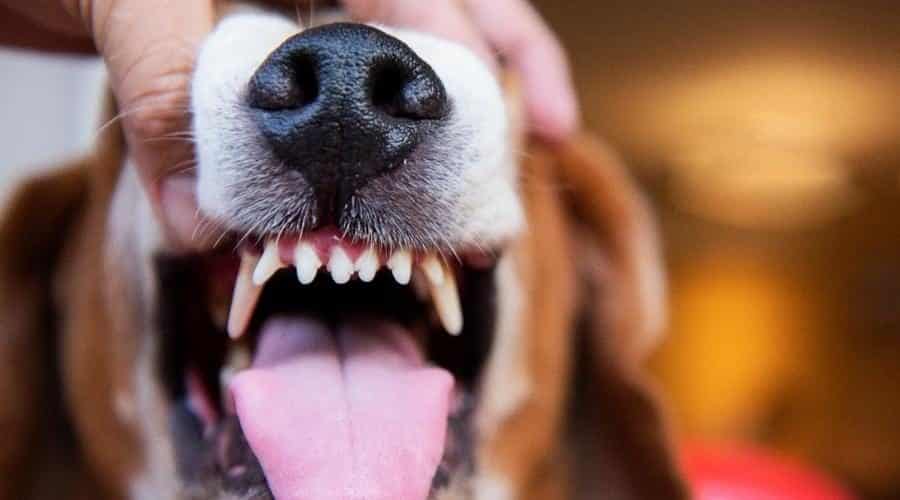 This article was written by a veterinarian, but it should not serve as a substitute for a visit with a local vet. Note: Clicking on links in this article could provide more product information and customer reviews. If you make a purchase, we earn a commission at no additional cost to you.

If your dog is breathing heavier than normal through its nose, then you might be wondering what the cause could be.

Heavy nose breathing can be associated with other sounds, too, such as snorting or snoring. Nasal discharge or sneezing might also be something to take note of. A blocked nose can be very uncomfortable for your do and a sign that there is a bigger problem going on.

In this article, we are going to look at some of the most common reasons why your dog might breathe heavily through his nose, as well as what you can do to help.

The external part of the nose is the bit you can see. This is the hairless and often moist nasal planum, which has two nostrils known as the nares. The nasal planum should be uniform and smooth in appearance, with a small amount of clear nasal discharge to keep it moist.

The internal nose is the bit we can’t see. Your dog draws air through its nostrils into its two nasal passages (one for each nostril). Inside the nasal passages are thin spongy bones, which are rolled into delicate structures and small passageways. These are called nasal turbinates, and they are covered in a thin mucous membrane (similar to the inside of the mouth). These nasal passageways communicate with the rest of the dog’s airways and the back of the throat.

Causes Of A “Blocked Nose”

If your dog has to breathe heavily through his nose, then he could be struggling with stenosis, a narrowing of his nasal passages. This narrowing can be caused by a number of conditions, including:

If your dog has inhaled a foreign object, this could cause an obstruction in one of his nasal passages (or both if he’s unlucky). The most common type of foreign body found in dogs is grass awns. The foreign body obstructs the nose by narrowing the nasal passage, but it can cause secondary inflammation. Infection is possible too, which contributes to your dog’s symptoms.

Foreign bodies can become lodged in the fine passageways in the turbinates and could require rhinoscopy (a small camera passed into the nasal passage) to remove. Young dogs that exercise in long grass are most likely to suffer from this problem.

Many flat-faced breeds of dogs suffer from brachycephalic obstructive airway syndrome (BOAS). Brachycephalic dogs have abnormalities making them prone to breathing difficulties. These include very narrow slit-like nostrils, which make it hard to draw air into the nasal passages in the first place. They also have shortened nasal passages due to their flattened skulls, an elongated soft palate obstructing the back of the throat, and everted laryngeal saccules. Even their windpipe (the trachea) is more narrow than normal dogs.

All these abnormalities mean these dogs have to work much harder, making their breathing heavy and noisy compared to normal-nosed dogs. Other signs of BOAS include excessive snorting, snoring, and difficulty exercising. Surgery can help some of these animals, but ultimately, we need to be breeding for health and avoid purchasing severely affected animals like this.

Infections in the nasal passages can cause your dog to breathe more heavily than usual. Viral infections such as canine distemper, canine adenovirus types 1 and 2, and canine parainfluenza can cause inflammation in the nasal passages, which is also known as rhinitis. Other symptoms, as well as changes in breathing, include sneezing, increased nasal discharge, and snoring.

Fungal infections are also a possibility. Fungal rhinitis can be a painful condition and is most often caused by a species known as Aspergillus. The spores of this fungus can be found in the environment, especially in the soil. Antifungal medications may be required to treat this condition, and sometimes surgery.

Parasites are not a common cause of nose problems in dogs but are diagnosed occasionally.

Canine nasal mites (Pneumonyssoides caninum) can cause problems in your dog’s nasal passages. These small mites are spread by contact with an infected dog and can cause sneezing, snuffling, and snorting.

Linguatula serrata is a wormlike parasite that can live in the nasal passages of dogs. It is usually caught by eating offal from infected sheep. These parasites can become quite large (the females grow to 8-10cm) and can obstruct the nasal passage. It is uncommon in the USA but seen more frequently in Middle Eastern countries.

Eucoleus boehmi is another type of nasal worm found in dogs, with occasional reports in the US.

Dogs with a tumor or growth inside their nasal passage could have a blocked nose and be breathing more heavily. Sometimes increased nasal discharge could be present too, or even nosebleeds (epistaxis).

Growths could be a benign polyp type, or they could be much a more sinister cancer. Most nasal tumors are types of carcinoma, including respiratory adenocarcinomas and squamous cell carcinomas. Other tumor types are possible, too, such as sarcomas. Unfortunately, many nasal tumors carry a poor prognosis, with treatment in this area being difficult.

Dogs with allergies could show symptoms such as breathing heavily through their nose, increased nasal discharge, sneezing, and snorting. Seasonal allergies are reasonably common in dogs and are similar to hay fever seen in people.

Many dogs have mild symptoms, but others could require treatment if they are struggling. Antihistamines or steroid treatment may be helpful for some dogs. Speak to your veterinarian if you think your dog may be struggling with allergies.

If your pup exhibits allergy symptoms, it may be time to have them tested for a food allergy with an at-home allergy test from EasyDNA. But be sure to check in with your vet before making any major changes based on the results.

Facial trauma could cause breathing issues. If your dog has an injury to their face, then this could affect how easily they can breathe through their nose. Examples of this would be road traffic accidents or being kicked by a horse or cow. X-rays may be needed to diagnose the extent of the damage.

Many issues found in the nasal passages can appear with very similar symptoms. Your veterinarian may need to perform some tests to try and differentiate between them and work out what the cause is. Diagnostic imaging can be useful, which may include X-rays of the nasal passages and rhinoscopy (passing a small camera up the nose). Samples might be taken, either a tissue biopsy from the nasal passage itself or a nasal flush that collects discharge and cells for culture and analysis.

Advanced imaging such as CT (computed tomography) scans can be helpful in some cases.

Some animals may require medications such as antibiotics, antifungal medications, antihistamines, or anti-inflammatories, whereas others might require surgery. Your veterinarian can advise you based on their findings.

How do I know if my dog has nasal congestion?

Dogs with nasal congestion often breathe heavier than normal through their nose and may show other symptoms such as snorting and snoring. Some of these dogs might have a discharge from their nose, too, and show other issues like sneezing excessively. If your dog has any of these signs, you should get them checked out by your veterinarian.

Why does my dog have trouble breathing through his nose?

Your dog may be having difficulty breathing through his nose due to several reasons. A physical obstruction in the nose due to a foreign body, nasal tumor, or nasal parasites could cause your dog trouble breathing. Also, being a brachycephalic breed and having narrowed nostrils could make breathing hard for your pet.

What does it mean when a dog has a runny nose?

If your dog has a runny nose with clear nasal discharge, then this could be caused by viral infections or allergies. Snotty mucus-type discharge indicates an infection, which could be secondary to a virus, or caused by a foreign body or fungal issue. A bloody discharge could occur due to severe infections but also possibly because of cancer.

If your dog is breathing heavily through his nose, it could be a sign of an underlying issue. It is always best to get your dog checked by a veterinarian, especially if they are showing other symptoms such as snorting, sneezing, or increased nasal discharge. Your vet may need to perform some tests to make a definitive diagnosis and treatment plan. Breathing heavily through the nose is not comfortable for dogs, so you should always get it checked out sooner rather than later to help your dog (and you) breathe easier.

Best Pet Insurance 2023: Is It Worth Getting For Your Dog?